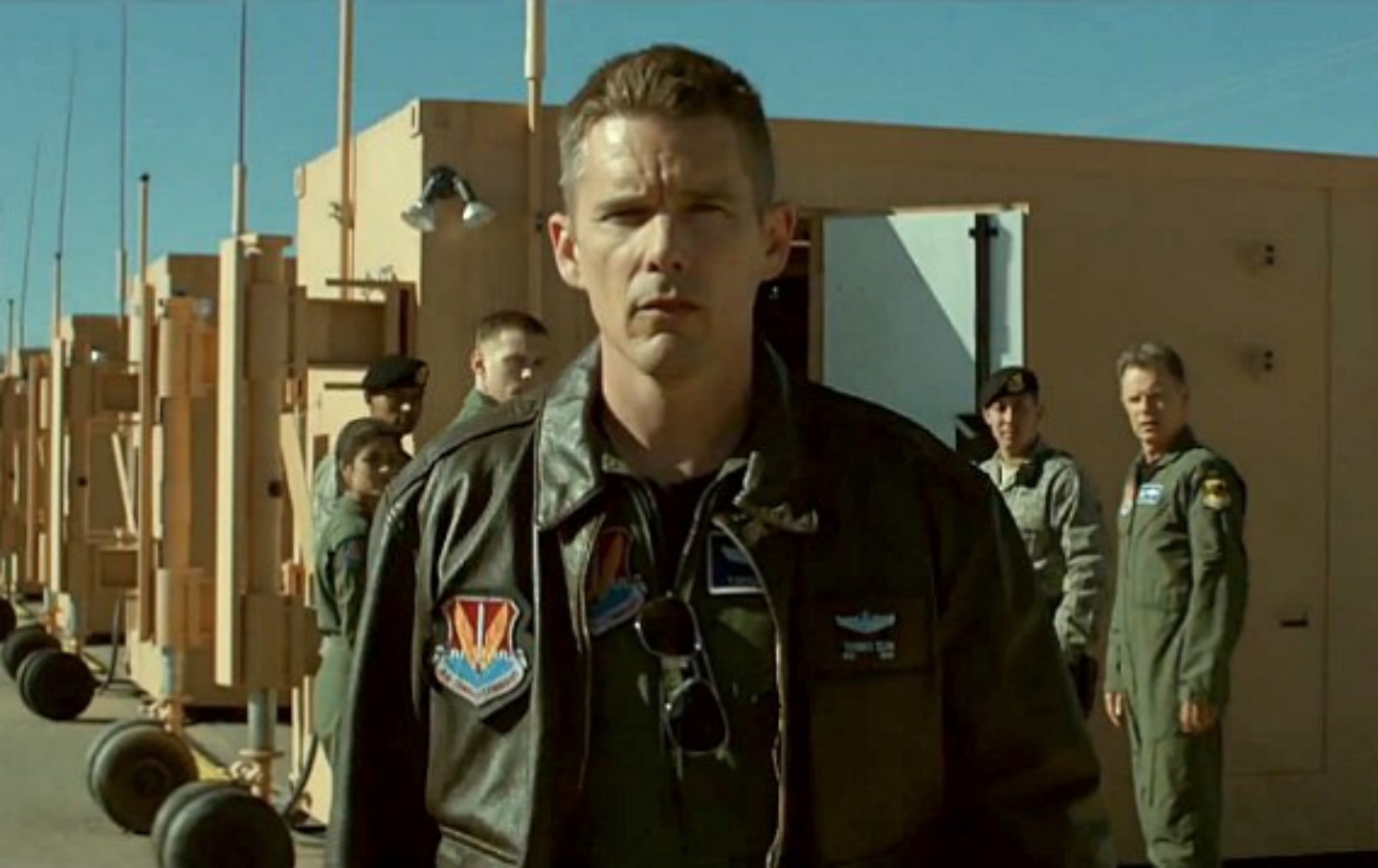 A war movie about a US drone pilot seems counterintuitive. A joystick and some computer screens in a shipping container–sized office cube outside Las Vegas—it ain’t exactly the stuff of a Hollywood action thriller. But that’s just the setting director Andrew Niccol gives us in his new drama Good Kill, which opened in theaters on Friday.

The film, written and directed by Niccol, follows Maj. Tommy Egan, an Air Force pilot who used to fly fighter planes, played by a convincing Ethan Hawke, at the height of the escalation of the drone war around 2010. Unmanned aerial vehicles, as drones are properly known, are becoming all the rage. War from a safe distance—“We’ve got no skin in the game,” Egan complains at one point—has its obvious appeal, and everyone at the base on the Las Vegas outskirts knows it. Egan’s commanding officer at one point tells a group of new recruits, “Drones aren’t going anywhere. In fact they’re going everywhere.”

The increase in drone attacks coincided with a more active CIA role in the program; in the film, a disembodied voice referred to only as “Langley” calls in strikes and communicates with the drone pilots’ cubicle via speakerphone, making repeated decisions that the “collateral damage”—civilian casualties—is worth it to blow up some “high-value target” or another. And, with the CIA’s more prominent role, civilian casualties do indeed climb. “Splash,” the drone pilots say after each explosion, followed by a less and less enthusiastic echo of “good kill,” giving the film its title.

The falling enthusiasm of some, far from all, of the drone operators gives the movie its tension. Though not a typical war movie—the explosions happen, without any audio, on a screen within a screen—Good Kill does explore what has become a common theme of today’s war films: post-traumatic stress disorder. This, like the civilian casualties, which are ripped right from headlines, is a real phenomenon: A 2013 study found drone pilots are just as likely as pilots in manned aircraft to suffer PTSD.

Hawke’s Tommy Egan drinks more and more heavily, and keeps a sprawling emotional distance from his wife, played by January Jones in a fine performance as the military wife. Jones is happy to have her husband home from long engagements abroad, but discovers slowly that he’s not so pleased to be fighting a war on office hours and returning to suburban life with two kids by evening. Egan stops at the convenience store several times in the film—a trope of PTSD in movies, but given a little extra punch in that the pilot is driving his Mustang home directly from waging war: “I blew up six Taliban in Pakistan today,” he tells the clerk. “Now I’m going home to barbecue.”

The entire film takes place in just a handful of locations: on base, at home, in the liquor store, in the car in between and, for one unnecessary scene, in a Vegas strip club. That latter moment serves mostly to heighten the sexual tension between Egan and a young airman played by Zoë Kravitz, who becomes Egan’s co-pilot. The airman—the Air Force uses the masculine for both sexes—seems to be little more than a sounding board for Egan’s moral concerns. But Kravitz’s acting stinks, and no wonder: She’s burdened by perhaps the worst writing in the film, including a cringeworthy pick-up line delivered to Hawke as the film winds down.

It’s particularly a shame because Hawke’s quiet acting is good enough to convey the emotional and moral weight that the movie centers on. Niccol’s best previous efforts—namely the sci-fi flick Gattaca (1997), which also stars Hawke, and The Truman Show (1998), which Niccol wrote—raise their big questions without ever needing to spell them out to the viewer.

Then there’s the big question Good Kill itself presents. Egan’s descent into PTSD drives the film—it is borne of boredom and propelled by the growing tally of civilian deaths on the other side of those monitors. And while drone pilots, as any other veterans, deserve our most sincere sympathies and society’s care, one can’t help but get the feeling that, though Hawke and Kravitz’s characters are burdened by the civilian drone victims, the Pakistanis and Yemenis who die are but bit players in the drama of the American military men and women thousands of miles away. We never learn any of their names. We see that they are women and children on the screen, but there’s no depth beyond that. We never learn of their PTSD because they die almost as quickly as they appear on screen; the shots of them wandering too close to targets of missiles already let loose last about as long as the camera lingers on their dead bodies.

Though the story is novel in that it deals with the anti-action of a drone operator’s cubicle, I’m left wanting for a more novel anti-story: that as told from the perspective of the brown people getting bombed.

That criticism might be a bit unfair, however. The warring while at a distance from war is itself a central theme of Good Kill. And Niccol’s clearly deep research will yield a fruit of knowledge for the average American viewer; they will know their nation has sinned even without any foreign names in the film. And anyone who’s met a war correspondent will know how difficult these stories can be to pitch—editors simply prefer stories about the Americans abroad, not the people those Americans are making war on. One imagines sources of financing in the film industry are even more shrewd.

Nonetheless, this drama deserves to be seen by both those interested by America’s conflicts in the age of the remote war, and those who know too little of it. The toll taken on our own fighters—tele-warriors or not—needs more attention; Niccol’s sensitive portrait, buoyed by Hawke’s acting, delivers some. And the viewer will get, at least, that the drone war’s only costs aren’t PTSD for American fighters; they will also understand how counterproductive the drone war could turn out to be. In another too obvious line delivered by Kravitz’s character, the upstart drone pilot reacts to yet another obvious civilian death: “We are a regular fucking terrorist factory. Best recruitment tool A Qaeda ever had.”