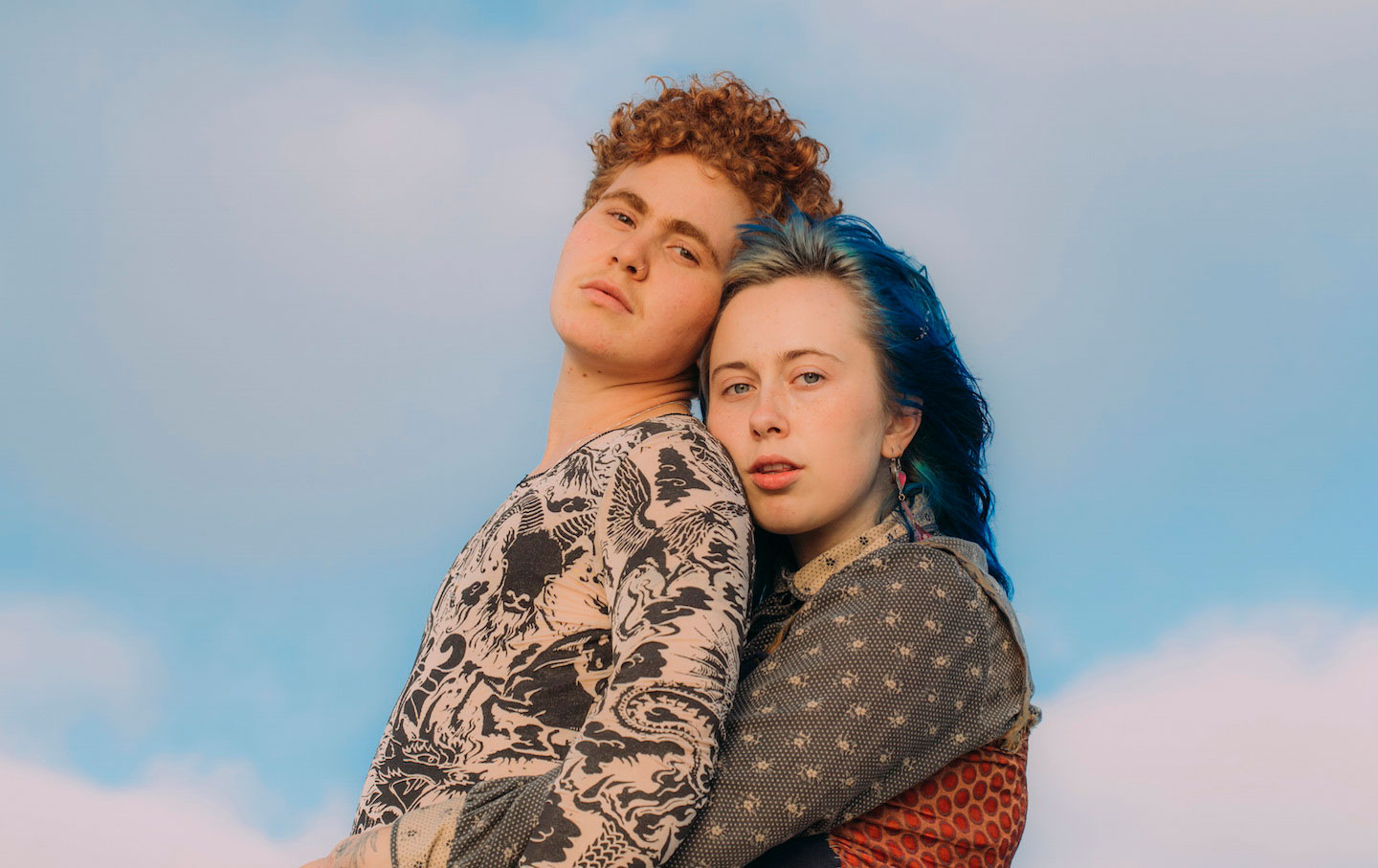 On their latest album, What Chaos Is Imaginary, Girlpool emerge as a sonic blast—the latest step in their evolution away from the sweet, off-kilter sound with which they first emerged on the Los Angeles music scene. When the indie-rock duo, Cleo Tucker and Harmony Tividad, released their eponymous debut EP in 2014 and their first full-length, Before The World Was Big, a year later, they were barely out of high school.1

Girlpool’s early songs presented heart-wrenching perspectives on a deceptively simple theme—the move from the teen years to young adulthood, with all its defiance, boredom, and early-onset nostalgia for a simpler time—as well as lyrical patterns that at times bordered on the nursery rhyme, set against the stark backdrop of guitar and bass. But one of the things that set Girlpool apart most was the duo’s penchant for eerie and captivating harmonies, their twin sopranos reverberating off each other into a wail that delivered all at once the opposing ecstasies and rages that are part of growing up. It was on their subsequent album, 2017’s Powerplant, that Girlpool added drums, bass, and other instruments to their traditionally bare-bones setup.2

On What Chaos Is Imaginary, Girlpool are still pondering the bliss and agony of existence over unconventional song structures. More than on any previous album, however, they’re exploring these heady atmospheres through crunchy, dreamy drapes of sound. And, most strikingly, their affecting harmonies have taken on a new tone. On Chaos, Tucker unveils his deeper tenor singing voice, the result of his beginning to transition last year.3

In an introspective move for the band, Girlpool’s latest album lingers over the divergent threads of the duo’s expanding artistry. Whereas on early songs like “Before the World Was Big,” Tucker and Tividad would sing the same lyrics in unison, on Chaos that vocal mirroring has given way to their respective voices’ weaving through one another. This shines through best on “Where You Sink,” in which the music repeatedly cuts off into a brief, sudden silence before returning as a forceful wall of distorted guitars and marching drum beats. Tucker’s tenor and Tividad’s soprano meld into a haunting drone, alternating with moments in which Tividad sings alone and the distortion drops out. There’s an anxiety born out of the instability of this back and forth that matches the interpersonal tension of the accompanying words: “You look like a kid from outer space / Always trying to plan your next escape.”4

The album’s 14 songs offer an untwining of sorts through which each singer takes a turn in the spotlight. At times, Tividad’s voice provides a heightening background to Tucker’s warm, slightly gritty one. At others, her glinting vocals come to the fore, with Tucker supplying the echoing lyrics and dreamy oohs and aahs. Together, they oscillate between hazy, muddy tracks, such as the New Wave–influenced “Minute in Your Mind,” and catchier tunes approaching more traditional pop structures, such as “Pretty,” a couplet-heavy song about crumbling idol worship. Operating with this newfound freedom of exploration, Girlpool have expanded their sound from an explosion behind a closed door to one blasting from the sidewalk.5

The result is not only an album that more freely steps into other genres, but also one that looks head-on at an unknown future. “I know I’ll be all right, although Emily’s in the sky,” Tucker croons on the album opener “Lucy’s,” a song that he wrote two years ago. The line calls back to the Before The World Was Big song “Emily,” which longingly recounted a lost childhood friendship. On “Lucy’s,” however, the singer shows a newfound peace with his disconnection from the past, despite his continuing ambivalence toward the relationships of the present. “She waters the ground with gin she pours it out / Onto the shadow of her home-state tree / She’s not ready to let it be,” Tucker continues, underscoring the restlessness and uncertainty that run through the rest of the album.6

You Need to Know About boygenius

Still, the sentimentality and poignant rumination that have become Girlpool’s trademarks remain. On “What Chaos is Imaginary,” Tividad sings from the perspective of one person observing another, manifesting an interior world in which the two can come into contact: “I loved you from the petty view / And watched you like the daily news / Rehearsing what’s reality / What chaos is imaginary.” The album is scattered with poetic verses acute enough to break your heart, sometimes swimming in bursting instrumentation, other times ringing out almost uncomfortably clear. Girlpool could never be described as musically conservative or conventional, but their venture into more poppy or orchestral arrangements only further deepens the pathos and conjured dream world they’ve created in their music from the start.7

Overall, Chaos isn’t a departure for Girlpool so much as it is the declaration of a band building on its overlapping past selves. It’s a project with a wealth of stylistic variation, thanks in part to the songs where the band’s members branch out on their own, yet it never loses the cohesion of finding the drama and, well, chaos in the seemingly quiet spaces of personal solitude and interpersonal relationships. Chaos is a triumph of finding oneself amid scarily infinite possibilities. As this latest entry in Girlpool’s discography shows, the risks involved in venturing out can be worth it.8