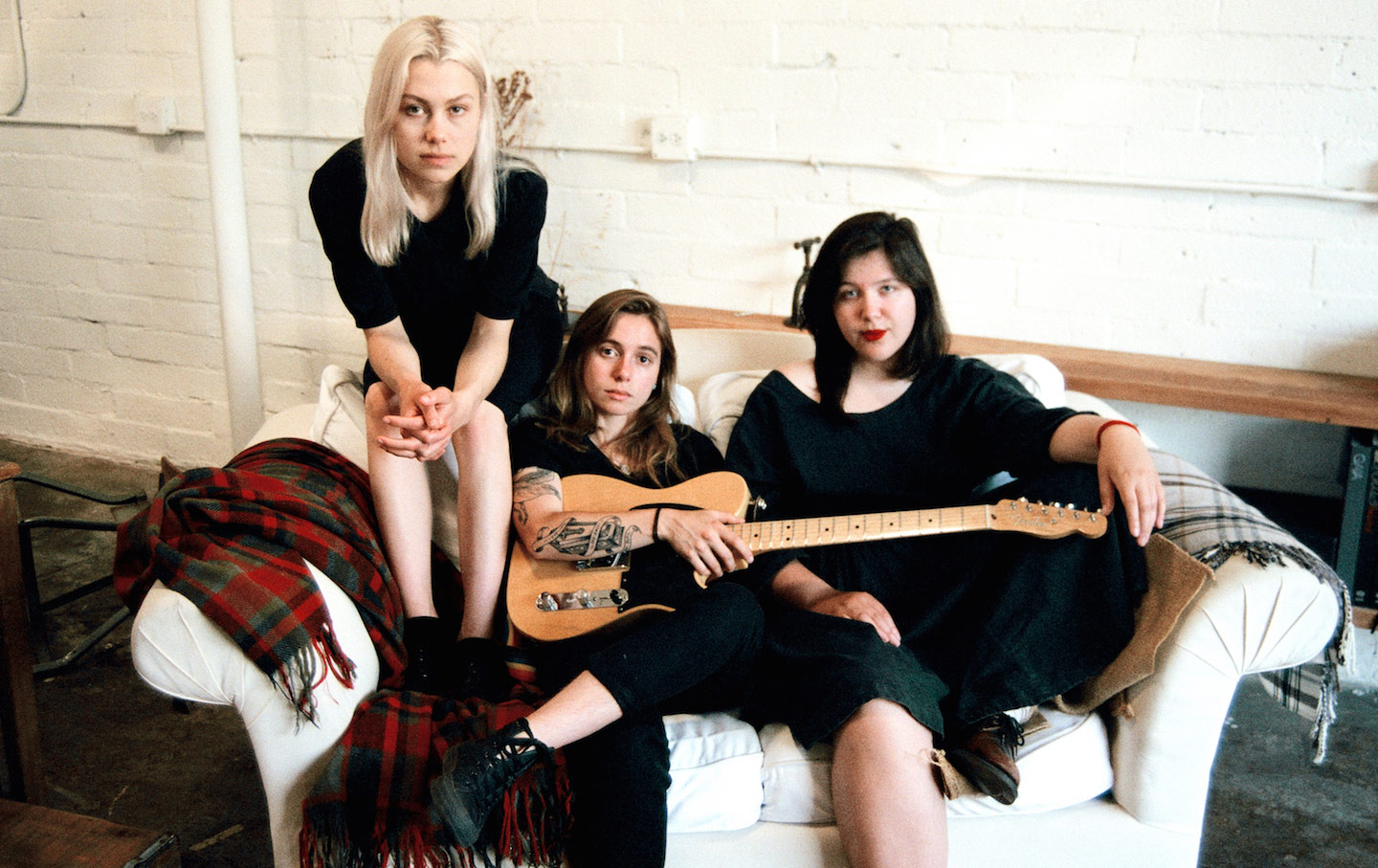 Midway through “Me & My Dog,” the second song on a new EP from the group calling itself boygenius, singer Julien Baker revs up to deliver a Herculean line. She slams into the towering top note of the chord held down by bandmates Lucy Dacus and Phoebe Bridgers; percussion and guitar momentarily bottom out, clearing the path for revelation. “I wanna be ama—” the three women sing, stretching their vowels, and anticipation fills in the rest: I wanna be amazing. The sentiment is unabashedly aspirational, woundingly earnest.

But when they finish, the word turns out to be emaciated, and an entirely different set of associations surfaces: fragility, instability, decay. The fake-out encapsulates a lot of what is remarkable about these three musicians. Their writing is clever and knotty, occasionally self-lacerating, and capable of doling out emotional gut punches by way of the tiniest details. Part of a recent wave of young, clear-eyed female songwriters who have staked a long-overdue claim to indie rock at large, Baker, Bridgers, and Dacus each found great success on her own before coming together as boygenius. The trio coalesced as a companion project for a joint tour they had booked, and they recorded their eponymous EP in the span of four days off from their demanding travel schedules—relatively unpretentious origins for a group instantly heralded as “super.”

To those who know these women as solo artists, a great deal of the fun in listening comes from hunting for their unique fingerprints on each of the EP’s six songs. Some are easy to spot. The brutal physicality of Baker’s writing peeks through in a line that Dacus delivers on “Souvenir”: “When you cut a hole into my skull / Do you hate what you see?” Bridgers brings her slick, cunning narrator’s voice to “Me & My Dog” when she sings: “I had a fever until I met you / Now you make me cool”—a sharp take on finding respite in a relationship while grappling with the power dynamics that play out within it. For her part, Dacus has a graceful and unnervingly tender way of articulating difficult truths; it shows on “Salt in the Wound,” where she crafts a lithe analogy for emotional labor: “Trick after trick, I make the magic / And you unrelentingly ask for the secret.”

These women are natural songwriting companions. In their individual work, they come at the same subjects—death, isolation, deteriorating mental health—from slightly different directions; stitched together, their perspectives offer a sweeping, wide-angle view. The group’s musical camaraderie is also bolstered by the fact that they are, in fact, friends. Baker has described her bandmates as “wise, discerning, and kind people whom I look up to in character as much as in talent.” The story of boygenius is rooted in respect-fueled female friendship—a restorative narrative for an industry in which quotas are imposed on women’s success and the ambitious are too often pitted against one another.

That narrative also weighs on the habitual underestimation of female musicianship, given that the whole concept of a supergroup has historically been tangled up with male ego. The earliest or best-known examples in rock—Cream; Blind Faith; the Traveling Wilburys; and Crosby, Stills, Nash & Young—offered no spots to women; with few exceptions, all-female groups like Wild Flag and case/lang/veirs have cropped up only within the last decade or so. The band name chosen by Baker, Bridgers, and Dacus cheekily evokes an appellation more readily granted to male musicians, and it embodies the ethos they adopted while writing the EP—voicing opinions and making choices with the unapologetic confidence of the guys they know “who’ve been told that they are geniuses since they could hear, basically,” as Dacus put it in a conversation with The New York Times. What’s more, the project points to the flawed nature of “genius” as a concept. The archetypal genius is a recluse, subsumed by his gift; boygenius’s work reinforces the strength of the collective.

Nowhere is their communion more powerful than on “Ketchum, ID,” boygenius’s closer. The track is homey; it begins with a snippet of studio chatter and is coated in fuzzy, ambient noise, lending it that close-quarters, band-in-a-small-room quality. In the verses, the women trade tales of life on the road. When they join together in tight, velvety harmony on the chorus—“I am never anywhere / Anywhere I go / When I’m home I’m never there / Long enough to know”—it’s like they’re trying to ease an intractable loneliness through the sheer togetherness of their voices. These lyrics are ostensibly about touring, but the words seem equally relevant to the experience of being a woman in the music industry—feeling presence-less, voiceless, and endlessly deferential to male co-writers and producers. The women of boygenius have found one another in these margins. Together, they write songs that ache for a time when the fact of extraordinary work being made by autonomous female musicians won’t scan as quite so… well, extraordinary.