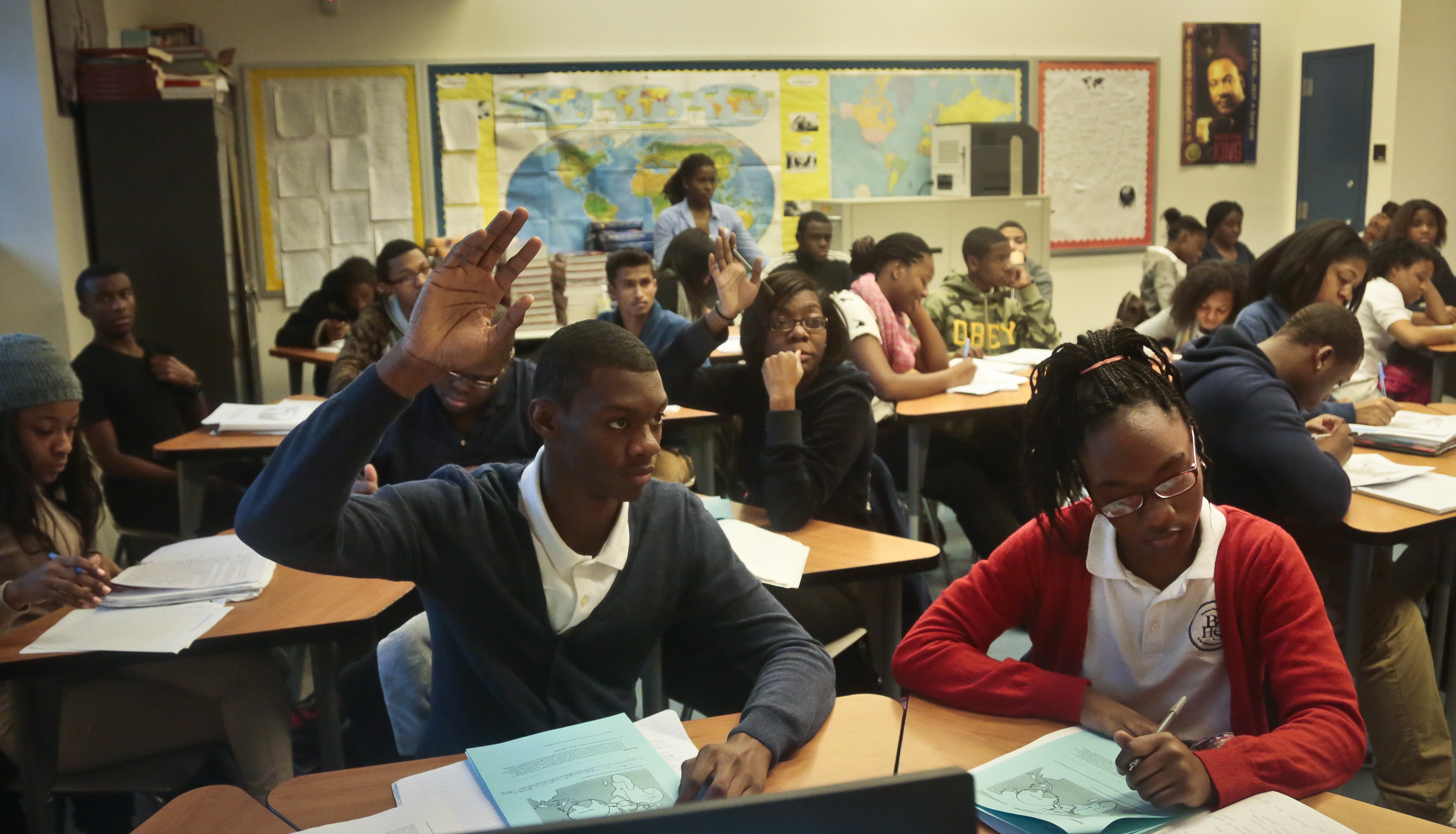 The GED, a crucial test for people who did not finish high school, is falling further out of reach from those who need it most. (AP Photo/Bebeto Matthews)

From the relentless standardized tests heaped on fourth graders to the terror of the SATs for college-bound high schoolers, high-stakes testing is on everyone’s mind these days. But the highest stakes might be faced, ironically, by the people whom society is quick to write-off as “drop outs.” The GED, the credential that has helped generations of Americans get a second chance at school, is moving further out of this generation’s reach.

For roughly 700,000 people each year, the GED exam is a key “alternative” pathway to a high school-equivalency credential. Evaluating knowledge in writing, reading, social studies, science and math, the score can be a gateway to a professional job or college degree, and can be used to qualify for financial aid. But now a reformed GED is threatening to narrow that gate: the new format will be more rigorous, costlier and completely computerized—daunting rigors for people who are living below poverty or aren’t tech-savvy. It all adds up to a harder test for people already challenged in many aspects of life: the testers are on average in their mid-twenties, half of them people of color, typically disconnected from the formal education system and facing deep economic burdens and maybe juggling work, family and night classes on the side. And they now face a $120 fee, which the testing company Pearson apparently thinks is a fair price for a shot at a certificate.

All this rebranding of the GED poses a bigger question for society: what is the test good for? The GED carries a stigma of mediocrity and may put people at a disadvantage when competing for jobs against full-fledged high school graduates. And even with a certificate, the testers have to contend with rising tuition costs and overcrowded community college campuses. Facing a 30 percent nationwide “fail” rate, they can ill-afford any more discouragement. Education access advocates fear there has been inadequate funding or program support from state or federal authorities to help with the transition, and adult education programs remain deeply underresourced.

In New Jersey, many students are simply left in the lurch. At Hopeworks ‘N Camden, a youth development and job training organization, the test transition has become a frustrating bottleneck for many students in the GED program who are eager to start college. There is no nearby testing center that offers the new GED or any alternative high school equivalency exam (though more than 10 states including New Jersey are adopting an alternative exam run by ETS, a commercial test-industry rival).

Some students who had gotten partial credit by taking portions of the paper version now must take the entire exam over again. Some students cannot enroll in college because—even though the exam itself is not a prerequisite for community college—the lack of a test grade is currently holding up their application for federal Pell grants, so they now face delays in obtaining essential financial aid.

Hopeworks Executive Director Father Jeff Putthoff says the chaos of the transition means that “people who were poor, who had dropped out of school, who had prepared themselves, and now could actually [qualify to enter community college], now would not qualify for financial aid. … If the GED is not available to people, it impedes their ability now to actually move forward” with their long-delayed education plans.

Kavitha Cardoza of the Economic Hardship Reporting Project has noted that while details on the content are unclear, the new GED will feature “more emphasis on critical thinking, more questions on science, and more writing,” and more detailed scoring. But fundamentally, the revamped test is about turning those scores into corporate revenue.

Historically affiliated with the American Council on Education, GED Testing Service recently became a for-profit entity aimed at measuring “readiness for jobs and career and college training.” Mirroring mainstream K-12 reform rhetoric, which highlights corporate management tactics and rigid standardized testing, CEO Randy Trask has boasted that while the GED has been criticized for being outmoded and reaching just a small percentage of non-high-school graduates, the overhauled computerized version will help to “ensur[e] that adults can demonstrate the basic technology skills required for 21st century jobs.”

But are the reforms raising standards meaningfully for students, or simply filtering more people out? After all, Pearson is a household name in school corporatization, aligned neatly with neoliberal education reform programs that push not only robotic standardized tests, but also quasi-private charter schools and controversial “common core” standards to make curricula more uniform and rigid. If the new GED follows the same reform path, then we may see a test that was originally designed to broaden educational access actually become more mechanized and narrow.

In New Mexico, students have panicked over the high fees and unfamiliar computerized format, according to SF Reporter. And state law mandates that the privatized GED be the official high school equivalency exam of the state, which prevents programs from transitioning to cheaper alternative exams. New Mexico former Lieut. Gov. Diane Denish described the overhaul as “just an attempt to privatize another part of education in the state,” while failing to address core barriers to education.

Richard Murnane, an economist at Harvard’s Graduate School of Education, tells The Nation that if modernizing the GED makes it harder to take and pass, “it means fewer people will get the credential. Will they be served better? We don’t know the answer to that. Nor do we know whether we have made life worse for the people who previously would have gotten the GED and now are not able to.” But he adds that without further support in their education, “Just changing the exam is not a very powerful tool to help alter life chances for these young adults…. You really need to think about what kind of programming makes sense.”

An alternative education that makes sense would go beyond test prep. New research suggests that adult learners seeking true “career-readiness” need front-end educational investment, such as comprehensive apprenticeship programs that connect them to employers, or courses that track them into community colleges. This is a model that some public university systems are already experimenting with. But severe funding gaps plague the entire public higher education system. And yet we hear far more about reforms to assessing and scoring people for certificates, not enriching their lives or educational institutions. That takes us back to a basic lesson: the only true “equivalent” of an education is, well, an education.

All the ideological debate in Washington about the “economic value” of a college degree seems troublingly academic for people shut out of opportunity for even a minimum high-school credential. They’re stuck between a school system fraught with economic and social barriers, and an alternative route to a diploma closing off. Those folks are ready to move forward. It’s our education system that’s stuck in neutral.