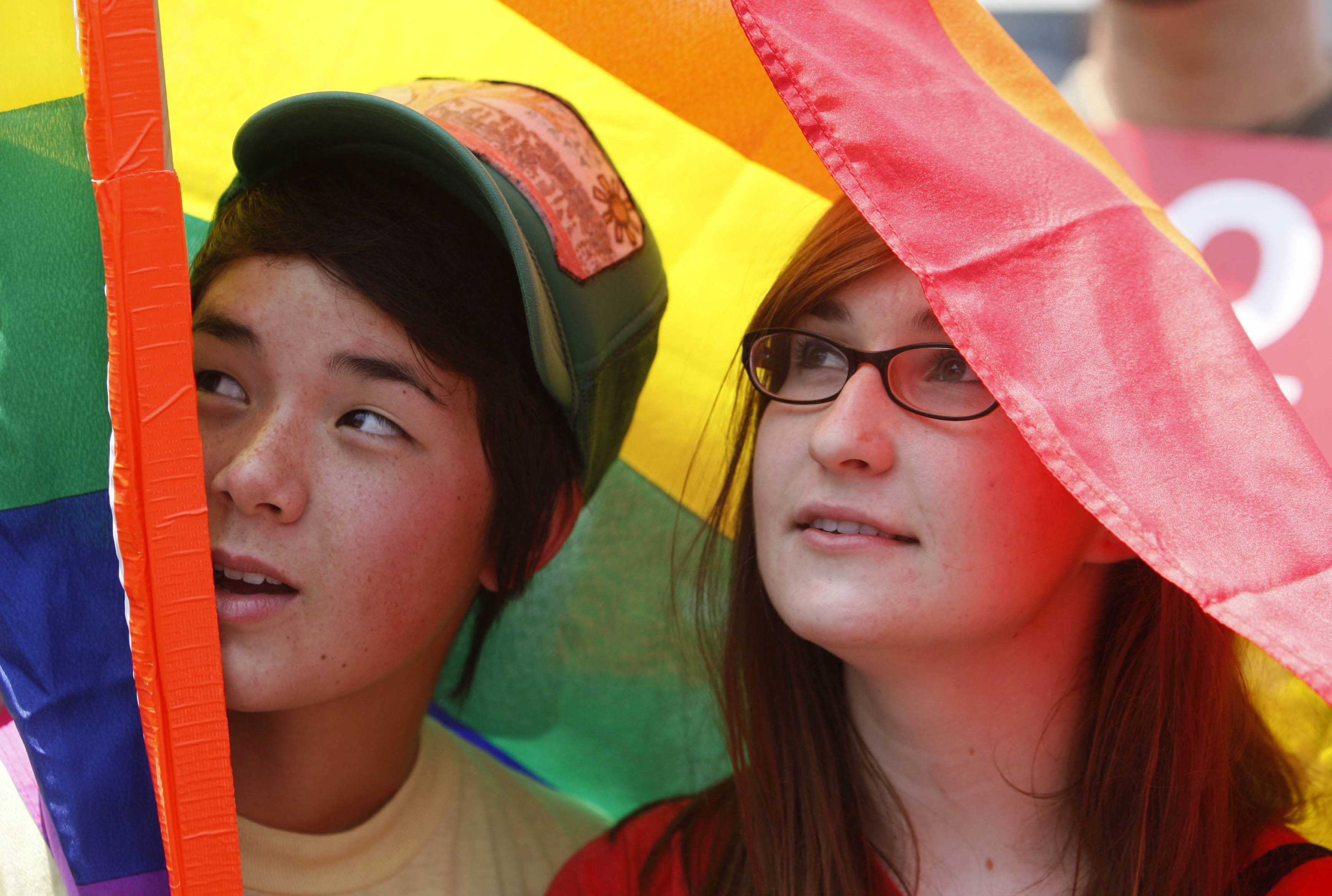 Ban Nguyen, 16, and Ivy Hammond, 17, stand in the shade of a rainbow flag s they listen during a protest rally at the East Los Angeles Recorder Office in LA on May 26, 2009. (Reuters/Lucy Nicholson)

This piece originally appeared in {Young}ist and is reposted here with permission.

The LGBT Rally for Homeless Youth began even before the hundreds of people who had gathered in Washington Square Park stood at attention before the stage, while they were still milling around and greeting one another. A smattering of joyous attendees, young and old and somewhere in between, took to the empty stage to dance in the late afternoon sunshine. Some performed near-acrobatic feats of motion—leaping, and falling, and seemingly flying—while others swayed their salt-shaker hips and laughed. The crowd clapped for them all.

On June 2, the Ali Forney Center, the National Coalition for the Homeless, and their friends and supporters kicked off the National Campaign for Youth Shelter with a rally calling for the end of homelessness among young people, and young LGBT individuals in particular. Junior Labeija, of the film Paris is Burning and the New York City ballroom scene, MC’ed the event with signature sass and curtsies for all the “fierce warriors” of the LGBT community. As the dozen or so speakers came up to the microphone, sheltered by Labeija’s paper parasol, the message that emerged was one of outrage, of hope, of shared history, and love. “When I was fifteen years old I was homeless and I used to ride the subways,” said Labeija, “Just because we come out of the closet, doesn’t mean we have to live in the streets.”

According to the campaign, there are 500,000 homeless youth in the United States; 40 percent of them are LGBT. This number comes from The National Alliance to End Homelessness. Many other studies estimate the number to be much higher. The Center for American Progress, for example, put the number of homeless minors alone at 1.7 million, and the 18- to 24-year-old population, for which there are even poorer estimates, at anywhere between 750,000 and 2 million.

However, many counts of homeless youth focus on homeless families with children at the expense of children who are on their own, outside of a family structure. The numbers the campaign uses are of young people who are alone on the streets without shelter. The number of LGBT youth in this situation are so staggeringly high because many are abused within their homes or thrown out of them entirely for being who they are. Once on the streets they are exposed to hunger and devastating physical and mental health problems; many trade sex for survival. They are also criminalized in droves by the police; trans women of color are singled out in particular as targets of violence.

The demands of the campaign are three-fold: A long-term federal commitment to give safe shelter to anyone in the United States under the age of 24, an immediate commitment to add 22,000 shelter beds and the appropriate services that come with them and a comprehensive effort to count the number of homeless youth in the country to determine how many more beds will be needed in the near future.

This number 22,000 comes from the most recent point-in-time count, the traditional method by which homeless individuals are counted by government agents and volunteers from communities across the country. Seeing as these are only the bodies that could be counted by volunteers in a single night, the actual number of unsheltered youths 24 or younger is undoubtedly much higher.

Carl Siciliano is the CEO of Ali Forney Center, which he founded in 2002. The Center provides homeless LGBT youth in New York with a safe place to stay, community and support. I spoke to Siciliano about the origins of the campaign and how the formulation of its demands came about. “Most of my focus has been on New York City in the past few years,” he said, “In New York City at least homeless kids have the subway system to sleep in. But kids are talking to me about freezing in the winter, being pimped out, and just terrible things, and it’s really opened my eyes to the fact that as much as I’ve been focusing on New York City and New York state, I feel that the root of the problem is a grossly inadequate federal response.”

State and local response to youth homelessness has been slow, sometimes progress is made, but more often beds are lost. In New York City, for example, Mayor Bloomberg attempted every year to cut the number of shelter beds for homeless youth, already fewer than 300 when he took office. The population of children sleeping in New York City’s municipal shelter system in 2013, Bloomberg’s last year in office, was up 22 percent from the previous year. As of January 2014, the Coalition for the Homeless has the number of homeless children in the city at 22,712.

Meanwhile, efforts to combat youth homelessness on the federal level have largely been toothless, focused on maintaining past gains, rather than pushing for progress that is swift and sweeping. “Most of the advocacy for homeless youth has been around trying to retain and maintain the [Runaway and Homeless Youth Act] funding. This is only funding 4,000 beds, so, yeah, it needs to be reauthorized every year, but it struck me as really problematic that there wasn’t advocacy for LGBT issues.” In this vein of creating a national movement, the next rally for the National Campaign for Youth Shelter will be a march in DC on December 8.

Last week’s rally, at the start of Pride month and three weeks before the forty-fifth anniversary of Stonewall, looked back at the history of the LGBT movement since the ’60s, using the power of past and continuing struggles to launch this new campaign. The names of Sylvia Rivera, Stormé DeLarverie, Marsha Johnson and others were invoked often throughout the rally. So was ACT UP and the many campaigns and court cases that eventually brought down DOMA. Edie Windsor, the plaintiff in the Supreme Court case which, last summer, made it illegal for the federal government to deny married gays and lesbians equal protections and benefits, was among those who spoke out against youth homelessness.

Martin Boyce, a veteran of Stonewall and lifelong LGBT activist reflected on the many victories since Stonewall, but added poignantly that, “some things haven’t changed, homelessness hasn’t changed. Or maybe I should say it has changed. Because it was episodic in my day, it’s an institution now.”

This sentiment was echoed in the words Chris Bilal, of the organization Streetwise and Safe and a generation that came of age decades after the Stonewall riots.

“Spaces that were once safe havens for the criminalized and the brutalized amongst us became private parks and dog walks,” said Bilal. “We are pushed out of parks just like this through intimidating and discriminatory policing tactics like stop-and-frisk and the use of our condoms as evidence that we are prostitutes.”

The rally concluded on a note similar to the one it had started on, with a performance by a trans woman of color, introduced as “Miss Tara,” of Whitney Houston’s “I Will Always Love You.” And with these words from Siciliano, who was last to speak,

“The LGBT community is considered different because of how we love. There’s something remarkable about that. As a community we’re defined by how we love.”