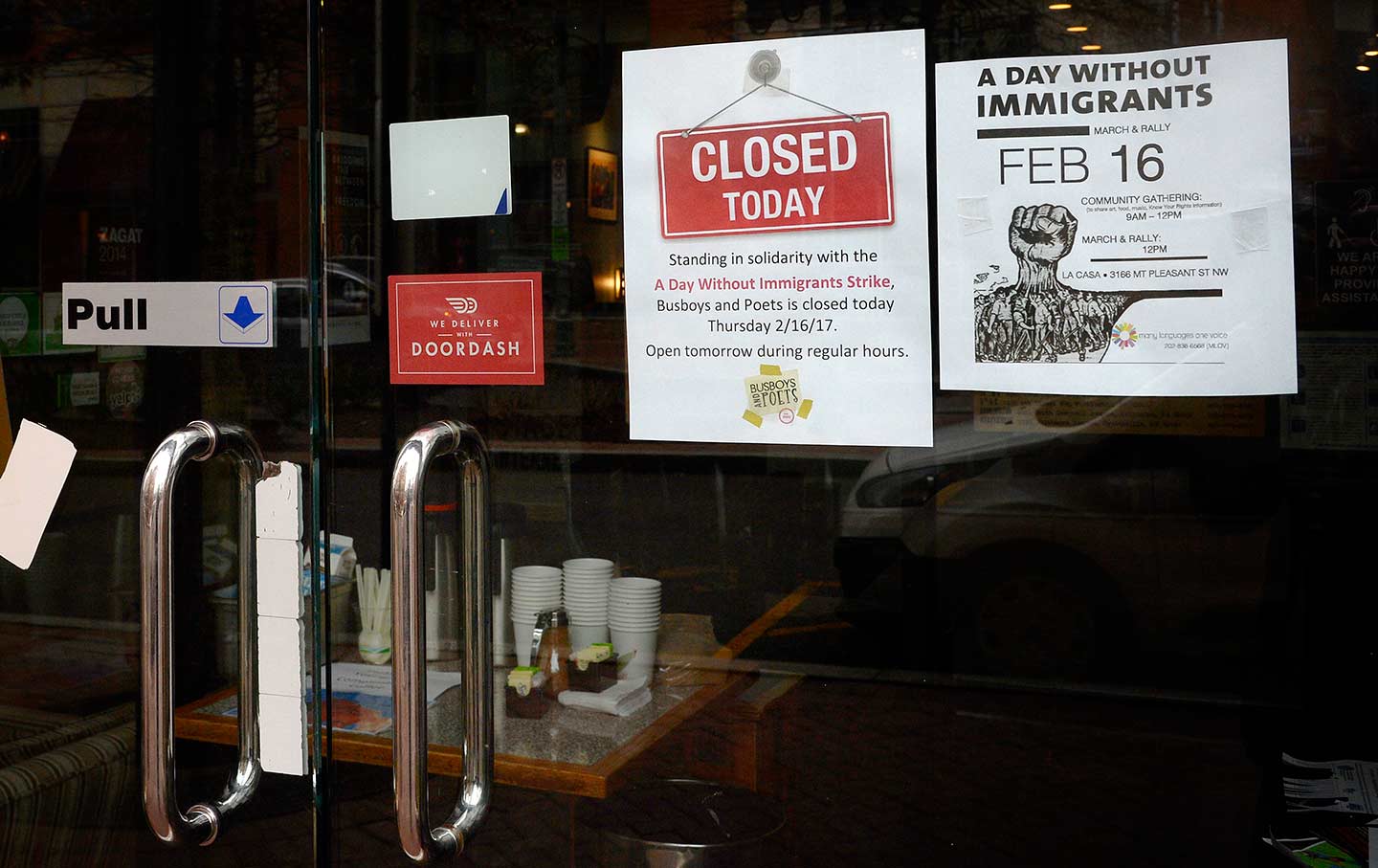 Immigrants across the country are going on strike and protesting today, February 16, 2017, as part of a “Day Without Immigrants.” (AP Images / Olivier Douliery)

On Election Day 2016, I emerged from three intense weeks of sit-ins and protests across New York, Pennsylvania, and Ohio. The goal: to bring the families of workers taken in the largest workplace raid under Obama’s presidency into the electoral conversation.

The most piercing moment was witnessing Aida, the spouse of one of the 25 undocumented workers detained in Buffalo, lie to her children about the whereabouts of their father—who is still detained today.

With the #Buffalo25 campaign in the backdrop, Trump’s victory was, above all, a reminder of the ongoing injustices that immigrant families will face regardless of the administration.

Following the election, I got a barrage of e-mails and calls. They asked: Are you going to be deported? Will DACA be taken away?

DACA, or Deferred Action for Childhood Arrivals, is an executive action signed by President Obama allowing certain undocumented youth to receive temporary protection from deportation and a work permit, with the ability to renew every two years as long as they remained in good standing. It was immediately applicable to more than 750,000 of around 11 million undocumented immigrants in this country.

When DACA was announced in June 2012, my life changed dramatically. DACA meant I could finally work and pay to attend Clark University. It meant I could study abroad in Shanghai. These opportunities arose after years of organizing by students and activists who were tired of living in a country where they could not pursue their dreams. When Trump was elected, it meant the real possibility that DACA would be taken away—as he had promised on the campaign trail.

I spent election night with other volunteer organizers with Movimiento Cosecha, a new, nonviolent, popular movement fighting for permanent protection, dignity, and respect for roughly 11 million undocumented immigrants. Following the election, our instinct was that the communities most under threat in the coming administration needed to feel that people would have their back. Inspired by high-school students in Phoenix and other cities who were organizing spontaneous walkouts, we set up a call for undocumented students and allies who wanted to send a message to the public that young people would not allow violence, racism, and deportations to become normalized under a Trump administration. Two days after election night, more than 80 students joined a call from schools across the country. Together, we organized a nationwide day of walkouts. A week later, on November 16, more than 100 college campuses hosted walkouts calling on their schools to become #SanctuaryCampuses.

Now, one month into the new administration, Trump has passed executive orders making it easier for ICE agents to deport immigrants en masse. Agents have launched an onslaught of raids terrorizing immigrants across the country. They are waiting in vans outside immigrant churches for Sunday mass to let out. It’s clear that we have to take the fight beyond college campuses. But how?

The truth is that “sanctuary” protections, whether in a church or on a college campus, aren’t primarily a matter of law or policy. While the #SanctuaryCampus campaign has articulated a set of policy demands, the reason the movement has been able to provide sanctuary to immigrants is that Immigration and Customs Enforcement, ICE, does not want to create public outrage. Enabled by a lack of public awareness, ICE deported over 3 million people under the Obama administration, and thousands of children of detained immigrant parents were placed into foster care. While immigrant-rights activists from the #Not1More campaign have led brave actions stopping deportation buses, and families facing imminent deportation have fought public campaigns to keep their lives together, mass deportations during the Obama years did not inspire public protest.

ICE makes careful calculations about what the public is willing to accept. And, at the end of the day, so does Trump. The fact that he has softened his stance on “DREAMers,” despite campaign promises to get rid of DACA, is a careful calculation about public opinion. Not only does he want to avoid activating a well-organized base of immigrant youth, he also knows that the American public is supportive of us. Trump is afraid that getting rid of DACA would trigger mass noncooperation—that we would make ourselves ungovernable.

Last week, Dany Vargas, a 22-year-old from Mississippi, was taken by ICE after coming out as undocumented in a press conference. As I write this, they are being detained at La Salle Detention Center in Louisiana and could be deported at any moment. Make no mistake: ICE, the Department of Homeland Security, and the White House are testing us to see how far they can go before people rise up. They are testing the broader public to see what will inspire mass civil resistance—and what will become the new normal.

While the realities of raids, repression, and deportations are nothing new for our people, they’ve reached an unbearable boiling point. Once again, the time has come for immigrants to transform the political weather. How do we do this? We listen to the popular wisdom of our people. On February 16, the immigrant community spontaneously organized a “Day Without Immigrants” and made waves all over the media. Community leaders pointed the way forward, and showed us they are ready.

What’s next? Cosecha is planning what could be the largest strike in a generation on May 1. It will be a Day Without Immigrants: We won’t work. We won’t buy things. Instead, we will rise together, we will march together and, in the absence of our labor, we will be recognized.

We are not striking to make the Republicans like us or to pass legislation that is in our favor. We are not striking because we want to remove Trump’s oppressive executive orders. Our fight is not in DC, but in every home, business, and industry that takes advantage of our labor and consumption. By striking, we make it clear that this country cannot function without immigrants. Through striking, we strengthen the confidence in our community and demonstrate that, through non-cooperation, we can force this country to realize that it depends on us.