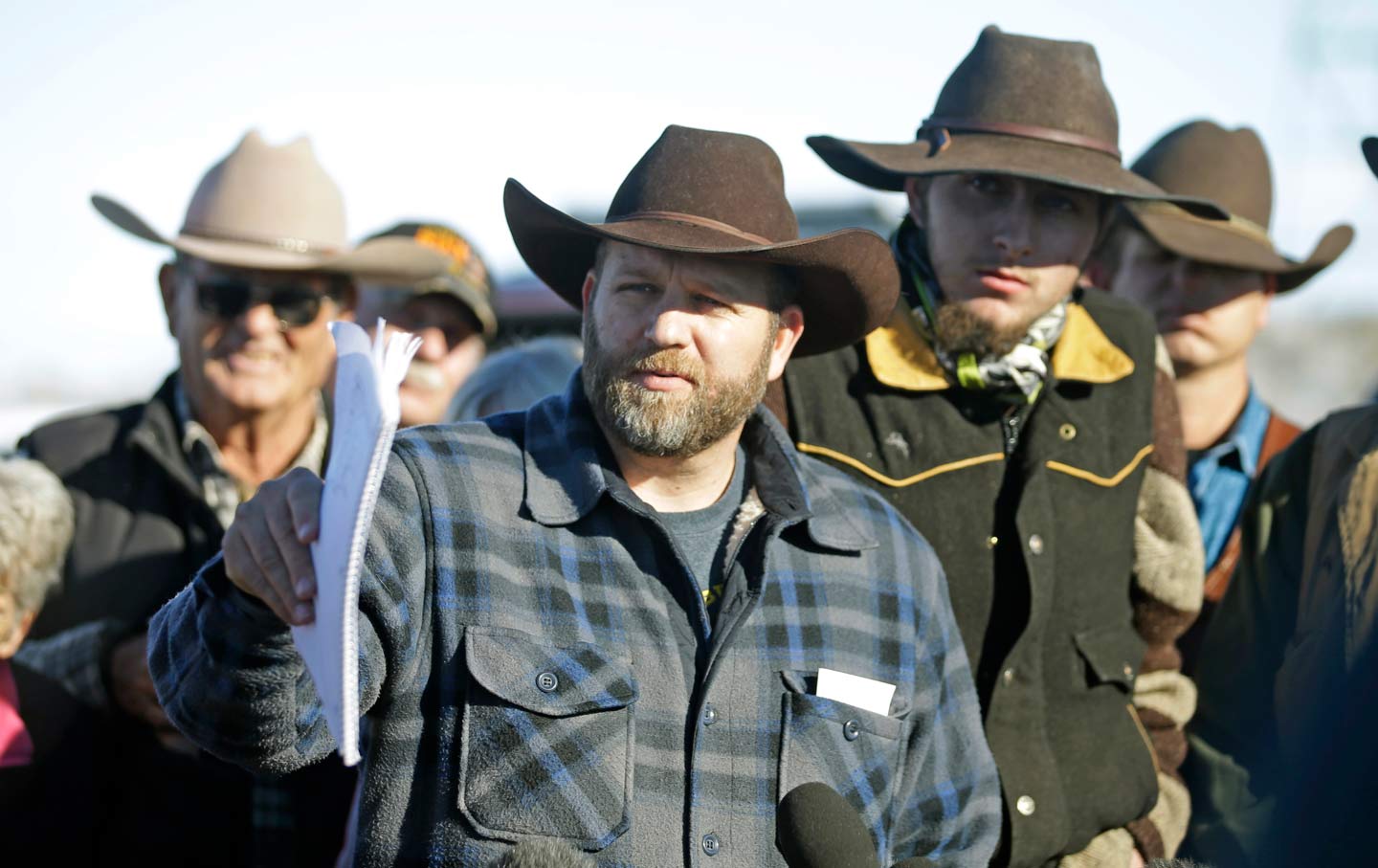 Five days into what would stretch to a nearly month-long occupation at the Malheur National Wildlife Refuge in Harney County, Oregon, rumors spread that the FBI was planning a night raid. LaVoy Finicum, an affable rancher from Arizona who seldom appeared without his tan cowboy hat, sat out by the road with a rifle in his lap and a blue tarp pulled over his head. “There are things more important than your life and freedom is one of them,” he said in a now-infamous interview conducted beneath the tarp. “I’m prepared to defend freedom.”

Inside the Bundy Brothers’ Armed Occupation

The FBI didn’t show up that night, but on Tuesday afternoon Finicum finally had the confrontation he’d been preparing for. Finicum, group leader Ammon Bundy, and six other members of the self-styled militia were on the way to share their anti-government ideas about land ownership at a community meeting in the town of John Day. Police stopped their two-vehicle convoy about 20 miles north of Burns, where they arrested Bundy and two others. Finicum, in a white pickup, drove away; a video released by the FBI shows him stopped a second time by two black SUVs further down the road, where Ryan Paine, another militant leader, got out of the pickup and was arrested. Again Finicum sped away, up a narrow forest road towards a barricade of law enforcement vehicles, then swerved into a snowbank where the truck nearly collided with an officer. Finicum jumped out of the driver’s seat, his arms outstretched. As FBI agents approached him he reached toward his waist, where officials say he was carrying a loaded 9 mm semiautomatic handgun.

The FBI took the “extraordinary” step of releasing the video to the public quickly in order to quiet rumors that Finicum was shot on his knees with his hands up. He wasn’t, though neither does the video prove that killing him was really necessary. It does call into question the reluctance with which law enforcement often releases video evidence in other cases where use of force is disputed. In the end what seems most extraordinary about the police response was how indulgent it was, at least up to the end. For 26 days a group of men allegedly stocked with explosives, night-vision goggles, and a variety of weapons took over public property, without the backing of the local community, where they were accommodated with electricity, heat, new recruits, snack delivery, even sex toys, and the closest law enforcement came was to offer a parley with the local sheriff.

The fun is over. Ammon Bundy, his brother Ryan, and nine others have been charged with conspiracy to impede federal officers from their official duties through use of force, intimidation, or threats, a felony charge that carries a maximum sentence of six years in prison. Through his lawyer, Ammon Bundy asked his supporters on Wednesday to “please stand down.” Just four people remained at the wildlife refuge overnight on Thursday while they negotiated for immunity. The federal judge overseeing the case has said none of the people in custody will be released on bail until the occupation is fully over.

In the looking-glass world the Bundy gang imposed on southeastern Oregon, they were not armed occupiers but liberators and educators, spreading a Mormon-inflected, Western brand of conservatism that attributes local economic woes to environmental regulation and government ownership of land. “We were being very successful in educating people and getting them to move towards freedom,” Bundy said in his statement. He’s probably right that his operation raised the profile of what had been an obscure regional debate over land rights. Certainly Finicum’s death, and whatever legal punishment awaits the rest of the occupiers, will stoke far-right paranoia about the tyrannical designs of the federal government. As for the local people Bundy claimed to be educating, though, most of them will be glad to see him move along.

The “freedom” Bundy advocated was in essence undemocratic and authoritarian. It presumed that a community was best represented by a small group of outsiders governing not on a mandate from voters but by the threat of a gun battle. It meant denying the American people access to public lands, which support not only birdwatchers but also miners, ranchers, and loggers, often at a fraction of the cost of private or state lands. It prevented the 16 people who worked at the wildlife refuge from doing their jobs. Bundy’s brand of “education,” meanwhile, led to school closures, and to the stalking and harassing of local public servants and the families of law enforcement. The stunt did nothing to help the Hammond family, which Bundy claimed as his initial goal. There’s certainly an argument to be made for the injustice of mandatory minimum sentences that Dwight and Steven Hammond were subjected to; but the occupiers weren’t there to build support for criminal-justice reform.

With the occupation quickly unraveling, there are pressing questions pertaining to the circumstances of Finicum’s death and the prosecution of the surviving occupiers. Groups concerned about the rise of right-wing militias are pushing for severe legal consequences, to discourage copycats. “It is critical that the federal government prosecute those involved in the Oregon standoff so that the antigovernment movement understands that there is a price to pay for their reckless and unlawful behavior,” Heidi Beirich of the Southern Poverty Law Center said in a statement following Ammon Bundy’s arrest.

A more troubling question is about the future of Harney County. As I reported shortly after the Bundy group began its residency on the bird sanctuary, the militants took advantage of the real economic hardship that plagues much of rural America, offering a simple solution in attractive ideological dressing. If only it were so easy to reverse the major economic shifts that have lessened the value of the extractive and agricultural industries that once made Harney County prosperous as handing a wildlife refuge over to a few ranchers. Burns might be free of Ammon Bundy, but not of its discontents.