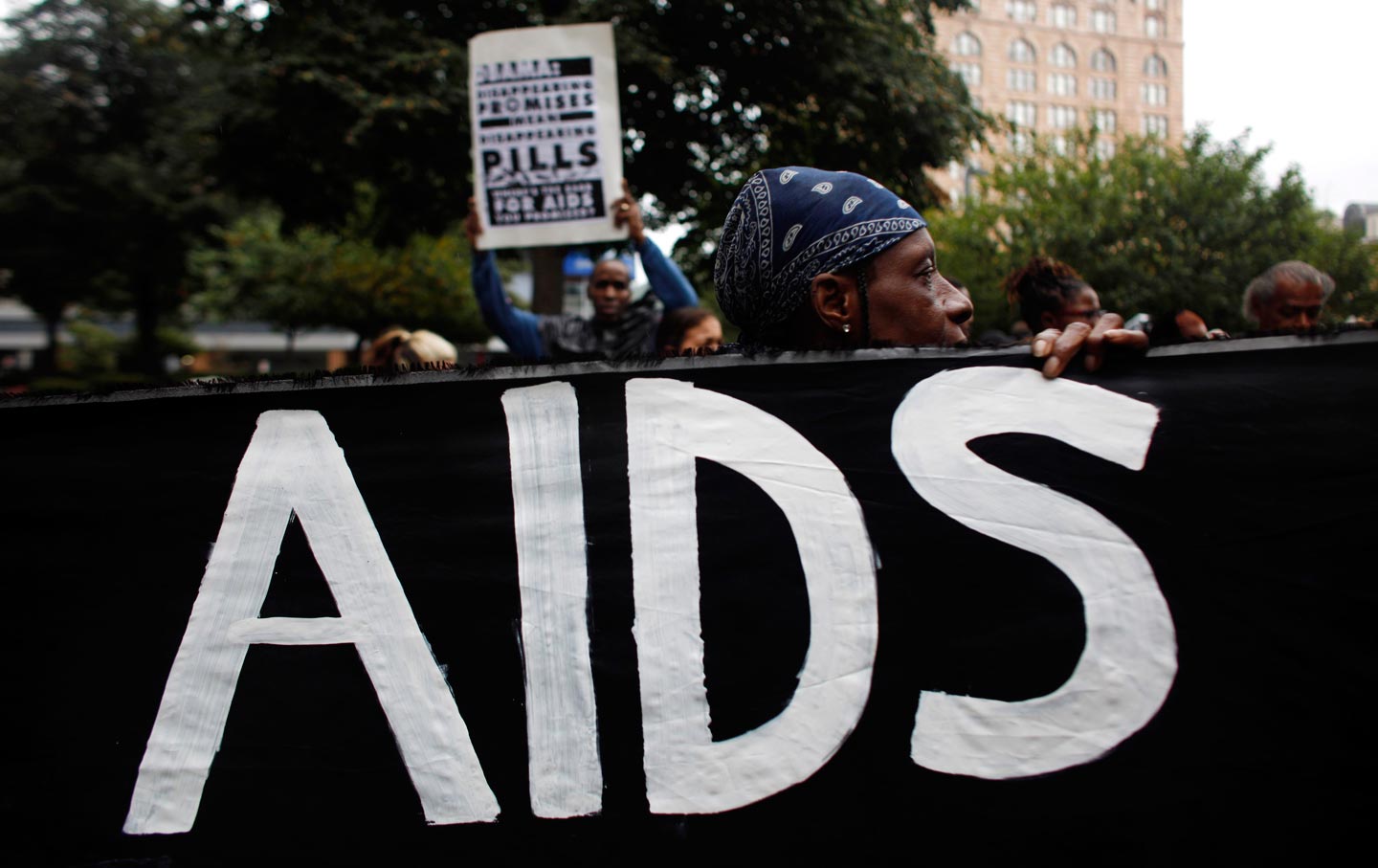 AIDS activists protest against the policies of the world's wealthiest nations regarding AIDS research and treatment funding in Pittsburgh, Pennsylvania. (Reuters / Eric Thayer)

We started the 21st century with a few received wisdoms about future progress: Two great expectations for millennials were that free trade would foster global development and diminish inequality, and that we would overcome one of the 20th century’s greatest scourge by ending the AIDS epidemic. Two recent political developments give us a chance to take stock.

Washington’s pledge continues several years of stagnant funding under PEPFAR, a US-led fund for programs dealing with HIV/AIDS and other infectious diseases. Other donor nations, meanwhile, have significantly ramped up their contributions compared to previous funding levels. The advocacy group Health GAP argues that the pledge is shaped by political calculations, not public-health priorities, as it “falls significantly short of what is needed from the United States to close the widening funding gap for the global AIDS response and capitulates to an irresponsibly low replenishment goal.” The group projects that the new US pledge is the equivalent of an increase of “roughly $80 million per year at a time when $7 billion per year in additional funding is what UNAIDS estimates is needed to put the world on track toward ending the AIDS crisis.”

Hillary Clinton touts her record in championing HIV/AIDS programs through her policy campaigns as first lady and senator, and as Obama’s secretary of state, when she famouly pushed for an “AIDS-free generation.” Yet if she continues the current level of investment in HIV/AIDS programs, she would ensure that the pattern of infection and death will persist well into the next generation. Health GAP projects that “failure to scale up the global HIV response considerably between now and 2020 will result in 17.6 million more new infections and 10.8 million more deaths—increasing the long-term need for HIV treatment and future costs to health systems.”

But while inadequate government support for the Global Fund is troubling, the scarier developments will come in the form of what ultimately fills the funding vacuum. The Obama administration is adding insult to injury by pursuing a separate policy that indirectly undermines HIV/AIDS funding for current treatment as well as future development of critical medicines. The Trans-Pacific Partnership (TPP), the currently stalled trade agreement that the Obama administration pushes as the cornerstone of its trade agenda, offers multinationals tremendous intellectual-property giveaways. So the corporations that control access to many crucial medicines for both chronic and infectious diseases would be allowed to undermine access to generic medicines under the TPP’s proposed patent policies.

For example, according to Public Citizen’s analysis of the TPP, which the president seeks to push through Congress before leaving office, the proposed intellectual-property provisions could undermine existing international accords that curb drug-licensing policies. These accords are vital to addressing public-health needs as they arise, but the language of the TPP allows patent -term extensions for drug makers that effectively block the production of generic medicines. And if those corporate protections are challenged by member states’ governments, the TPP’s corporate tribunal system would allow Big Business to sue states to weaken health and safety regulations to protect their profitability.

The day-to-day impact of such trade rules might not directly affect access to HIV/AIDS treatment, which currently relies on international aid, established public-health protections carved into World Trade Organization “TRIPS” rules, and special voluntary exemptions granted by the industry to expand treatment access in poorer countries. But the TPP would, overall, vastly expand Big Pharma’s monopoly power over public-health resources.

On the Harvard AIDS Initiative blog, Brian Honermann, AmFAR’s senior research advisor, stated that the TPP’s patent restrictions could have drastic long-term effects on the development of and access to new anti-retroviral medicines (currently supported by public and private funding through UNITAID, humanitarian agencies, and industry. In the earlier years of anti-retroviral development, he noted, “had these sorts of provisions been in place, we wouldn’t have had the explosion of medications that made the scale up of antiretroviral therapy in Africa possible.”

Going forward, a group letter from Oxfam, Médicins Sans Frontières, and other NGOs warned that the TPP could impede the innovation of the next wave of HIV/AIDS medication, long-acting retrovirals, “by restricting access to science and medical knowledge.”

In many ways, however, the global health infrastructure is rigged by industry already. PEPFAR’s stated agenda calls on donor states and industry to “partner” in order to “Strengthen PEPFAR supply chains and business processes to increase the efficiency of our investments.”

The seeming contradictions of international policy are no accident. One set of international accords, PEPFAR and the Global Fund, seems to be at odds with the TPP’s blatant coddling of Big Pharma, because both trajectories in public-health policy are designed to be ring-fenced by business-state collusion.

Brook Baker, legal scholar and advocate with Health GAP says that under this global health-policy regime, the “middle-income countries” that may become less reliant on Global Fund and PEPFAR aid in the coming years may suffer the most. Their need for more advanced antiretrovirals will chafe against medical intellectual-property monopolies that will be “greatly strengthened by trade agreements and through other government/pharma pressures.” These countries may simultaneously lose the voluntary drug licenses industry has granted as charity, and “have to pay higher-tiered prices threatening affordability and scale-up.”

Both PEPFAR and TPP purport to be instruments of global social progress. Both are neoliberal policy frameworks that put profits above people in different ways. A future of public healthcare in which essential medicines are held hostage by the pharmaceutical industry is, in a way, perfectly harmonized with a future of unbridled capitalist growth.

The Obama administration’s twin “legacies” in HIV/AIDS policy and trade policy both line up loyally on the side of capital. For the youth of tomorrow, a future in which health is guaranteed as a human right is running up against a free-trade system that demands endless profits.