When Sofia Karim was growing up in the UK, her uncle would frequently take exception to her British citizenship: “He would always admonish me, saying, ‘You’re part of the brain drain!”

Karim’s uncle is Shahidul Alam, the famed photographer incarcerated in his home country since August 5 for speaking out against the Bangladeshi government. The term he used in Karim’s childhood describes a well-known phenomenon in which educated professionals from so-called “Third World” countries migrate to wealthier “First World” powers. But though Alam may have embraced the concept of the brain drain, he rejected those ranked global categories.

“‘Majority World’ was his term,” Karim said, explaining that Alam would ask her: If the majority of the world’s population lives in the colonized and exploited lands of the Global South, why should they be considered “third”?

Alam himself showed early signs of brain drainage—earning a PhD in chemistry at the University of London before launching his photography career. But he moved back to Bangladesh in 1984, because, as Karim put it, “He knew that Bangladesh needed him more than the UK did.” 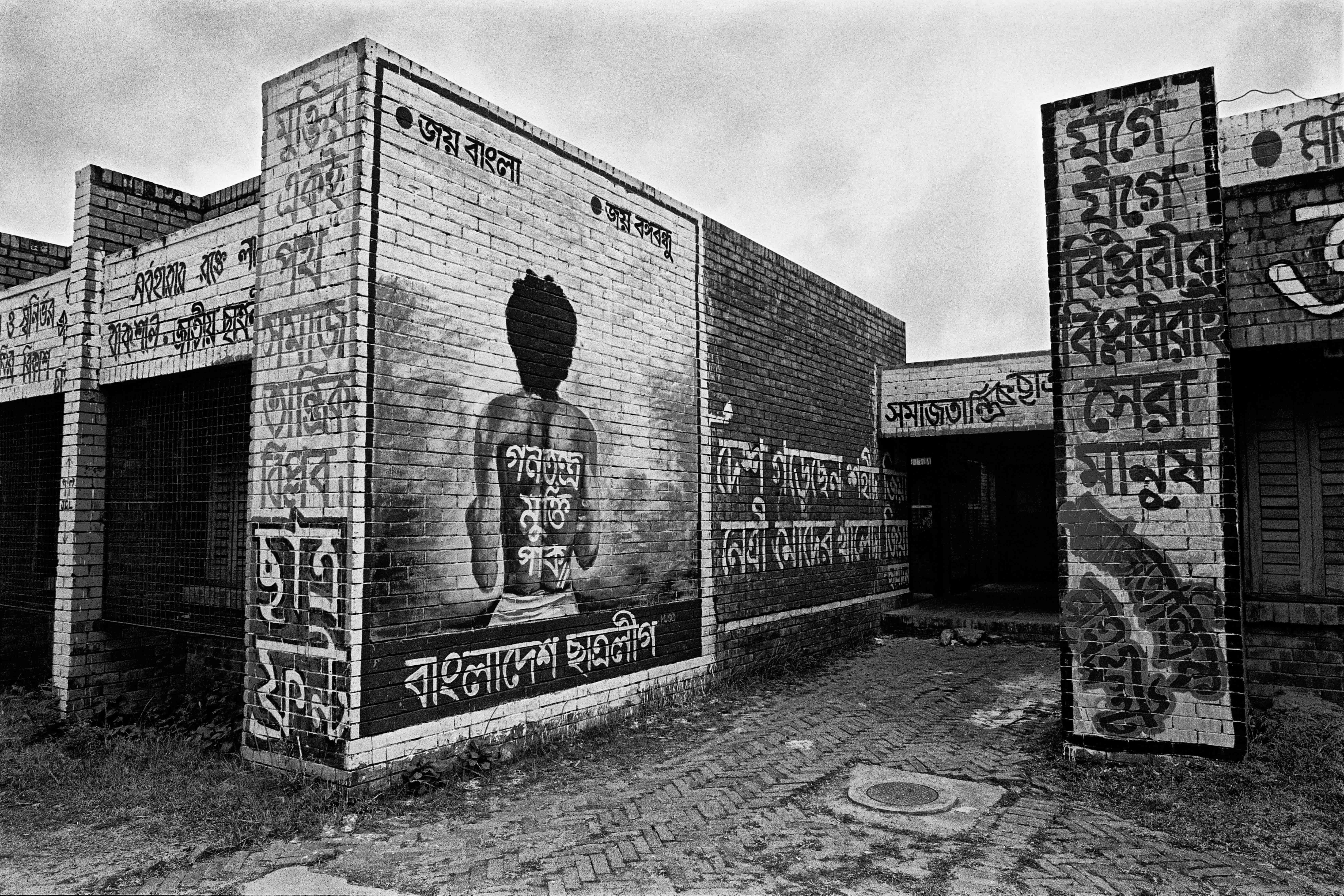 A mural at Dhaka’s Jahangirnagar University honoring Skira Noor Hossain, a protester who was killed by Bangladeshi police in 1987 with the words “Let democracy be freed” painted on his back. (Drik / Majority World / Shahidul Alam) 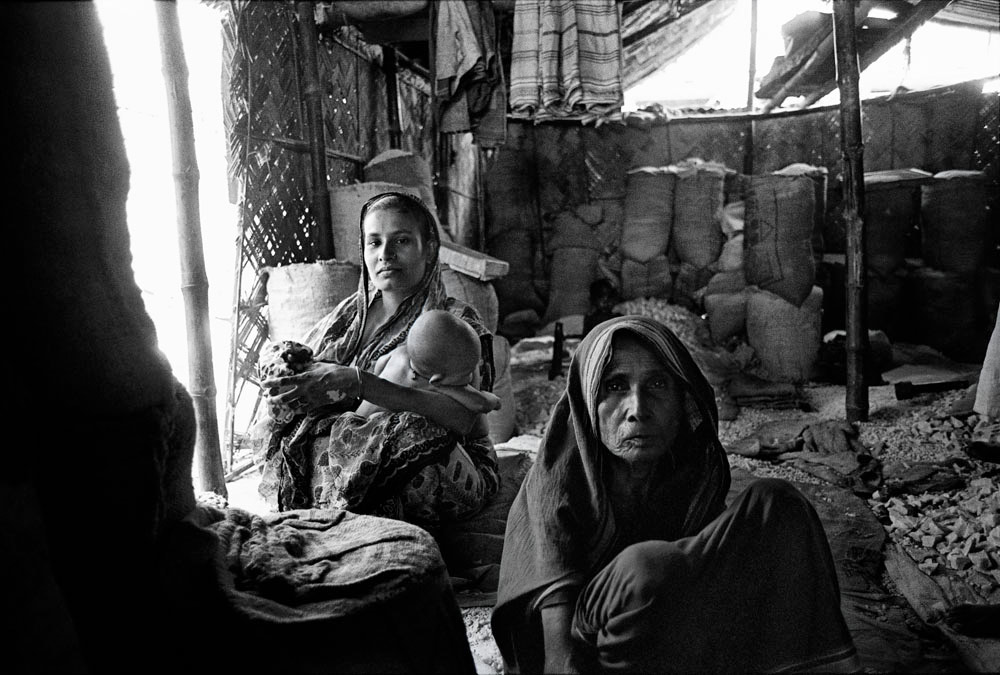 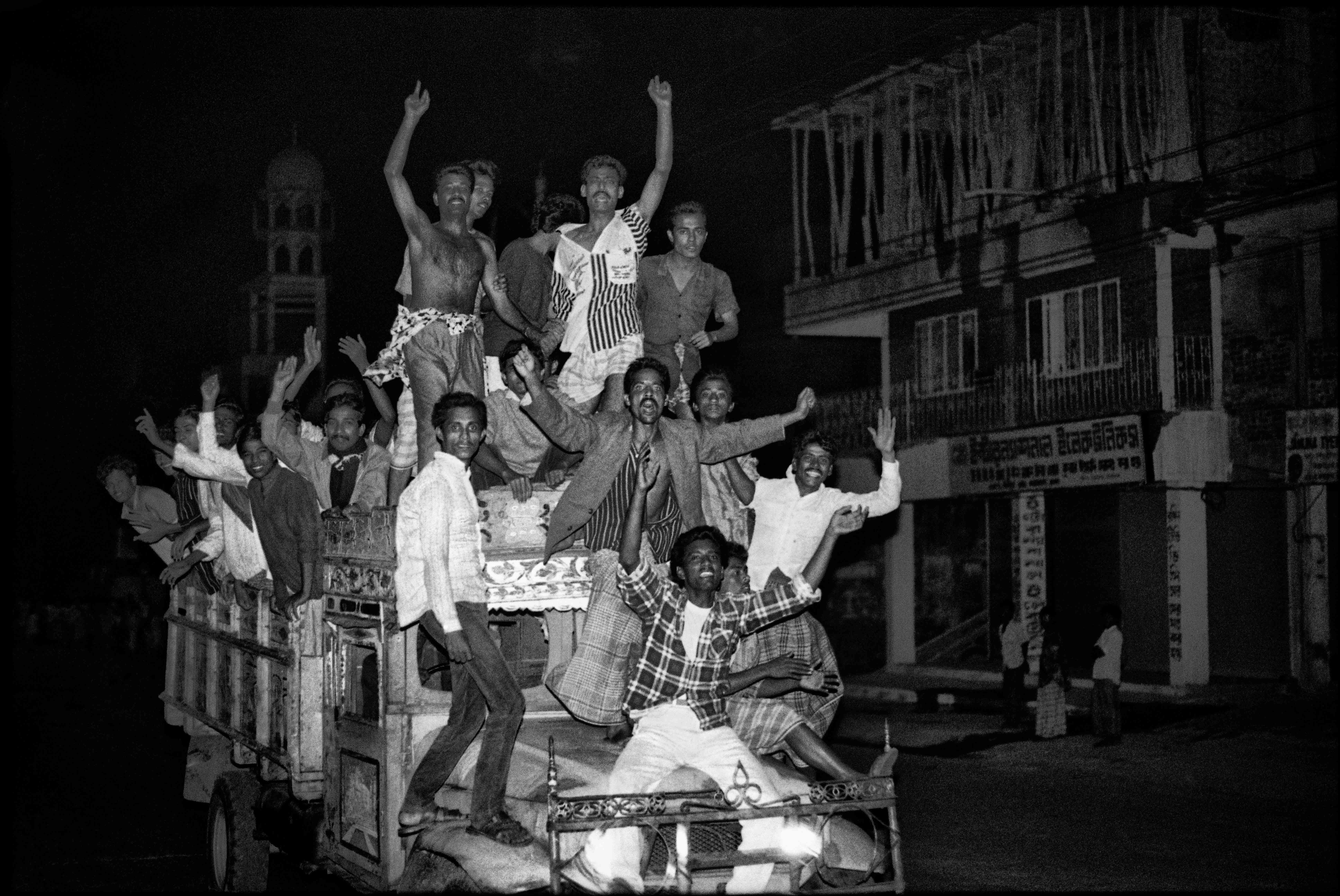 Though Alam often critiques the government and documents its abuses, he is, by all accounts, a proud Bangladeshi. When Karim would ask as a child about his favorite country, her uncle always proclaimed “Bangladesh!” Alam started Drik Picture Library “in response to the stereotyped portrayals of our world in the western media” in 1989, and later launched the agency’s educational wing, Pathshala South Asian Media Institute, so that other Bangladeshi photographers wouldn’t have to leave the country, as he did, to get their start. As a judge for the World Press Photo competition, he saw a need to recognize photography local to Asia, and in 2000 he started Chobi Mela, which prides itself on being “the most demographically inclusive photo festival in the world.” Then in 2004, he founded an international photo agency for photographers from Africa, Asia, Latin America, and the Middle East—appropriately called “Majority World Photo.”

As Karim explained, Alam did all this to put the tools of representation into the hands of the people. “He felt that the only way that stereotypical image of Bangladesh could be reversed would be with Bangladeshi photographers,” she said.

Ignoring Alam’s commitment to his country, the Bangladeshi government detained and charged him under Section 57 of the country’s Information and Communication Technology Act, prompting international outcry from his fellow journalists, photographers, and activists. The jailing of Alam has been cruel and unjust: He was abducted without explanation by more than 20 plainclothes detectives, allegedly tortured in prison, and shuffled into a courtroom barefoot. But Alam is far from the first to be prosecuted under Section 57, which resembles a speech code with its prohibition of “publishing fake, obscene, or defaming information in electronic form.” The government has weaponized the law against anyone whose communications do not comply with its ideals.

Karim is aware that her uncle has backing that other government critics in Bangladesh don’t. Alam has been recognized by National Geographic, the Royal Photographic Society, and even the Bangladeshi government itself as an exceptional photographer and activist. And while his acclaim is well-deserved, it also affords him a status that highlights the very inequality he aims to fight: Since 1996, 19 journalists have been murdered in Bangladesh. At least another 21 have been arrested for Section 57 violations since March, and 23 more were attacked and beaten on the day of Alam’s arrest, which occurred amid protests over the traffic deaths of two students. (At least 12,000 people are killed per year in Bangladesh in road accidents.) The demonstrations rocked the country for two weeks and prompted the government to slow mobile-Internet speeds down to 2G, so dissenters and documentarians would be unable to upload photos or stream video. These are only the reported numbers: Hundreds more have allegedly “disappeared” without explanation. The furor over Alam’s detainment has sometimes spilled over to these other injustices, and other times drowned them out.

“[Alam] would be the first to say that it’s awful that there’s that sort of hierarchy,” said Karim, who acknowledges that her uncle’s fame may have motivated the Bangladeshi government to formally charge him, rather than making him “disappear.” It appears that Alam’s impressive reputation is currently his strongest weapon, and the government has responded accordingly—with a campaign of vilification of Alam and his family. 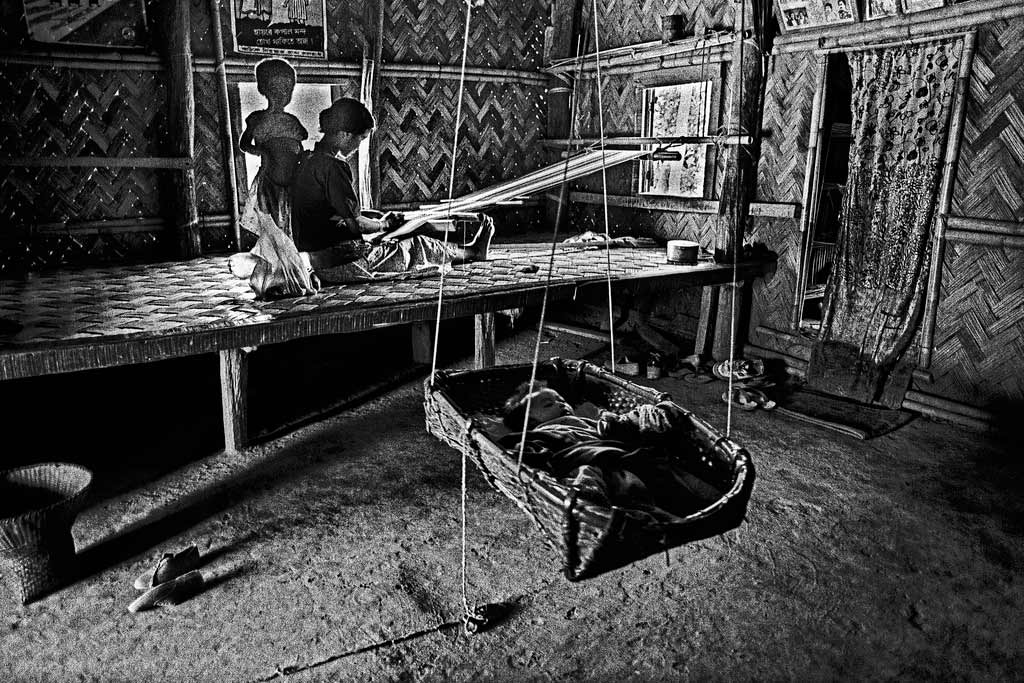 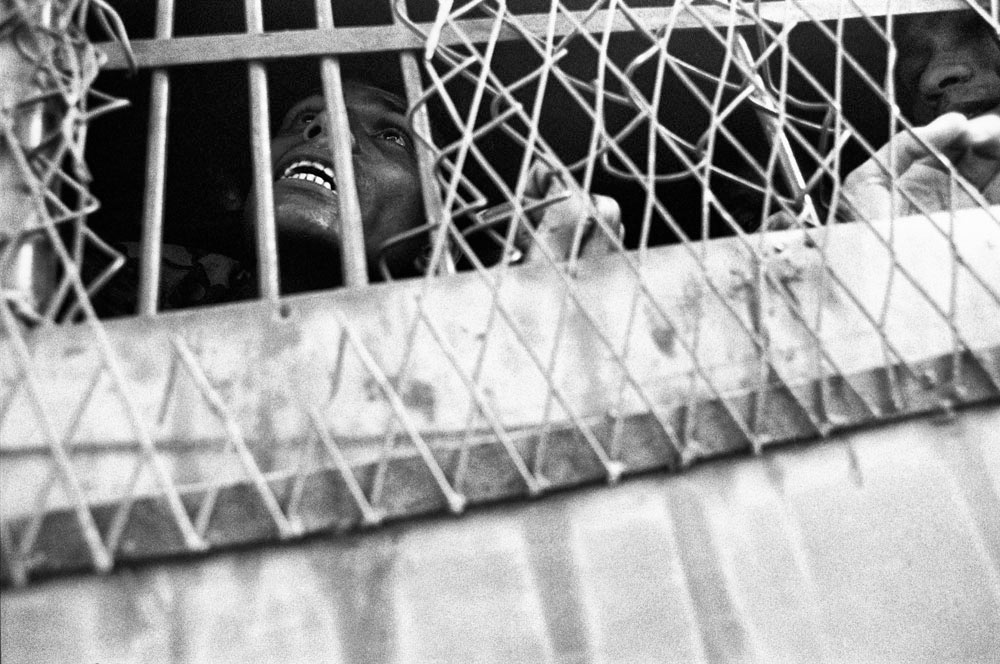 A student calls for help from a prison van after being detained in a 1996 police raid on Dhaka University dormitories. (Drik / Majority World / Shahidul Alam) 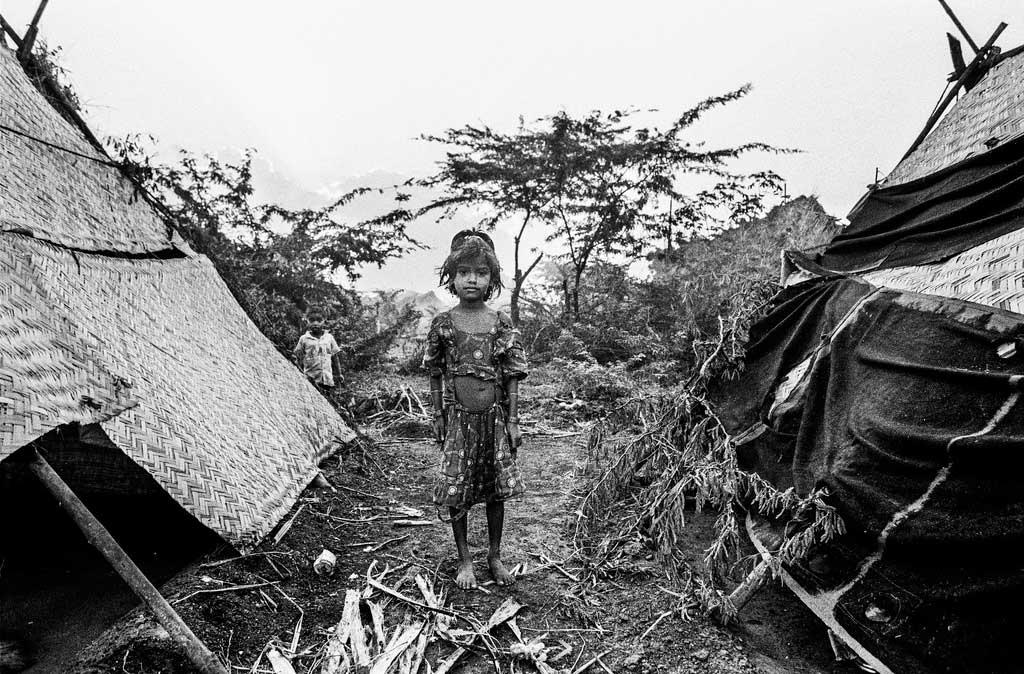 A migrant child laborer stands in the sugarcane plantation where she worked in India in 1997. (Drik / Majority World / Shahidul Alam)

Karim told me that the government and its operatives have “hijacked” the #FreeShahidulAlam hashtag on Twitter by disseminating lies like the accusation that Alam fabricated a story of witnessing a rape. Still, upon examination of an archive of the hashtag, it appears that the vast majority of #FreeShahidulAlam tweets—on the English-speaking Twittersphere at least—are in the photographer’s favor.

Among the #FreeShahidulAlam tweets and press coverage of his imprisonment come notices that Alam is in need of “immediate medical attention.” Dhaka’s Daily Star reported that “he is suffering from respiratory complication[s], problem[s] with eyesight, and pain in his jaw and gum.” His need for medical care has further worried his family and made the international community’s calls for his freedom more urgent.

“I just hope the government sees sense,” Karim said. “They can still release him and save their reputation.”

Learning and Healing in the Archive of Black Thought

Democrats Are Holding Up a Bill to Protect Pregnant Workers