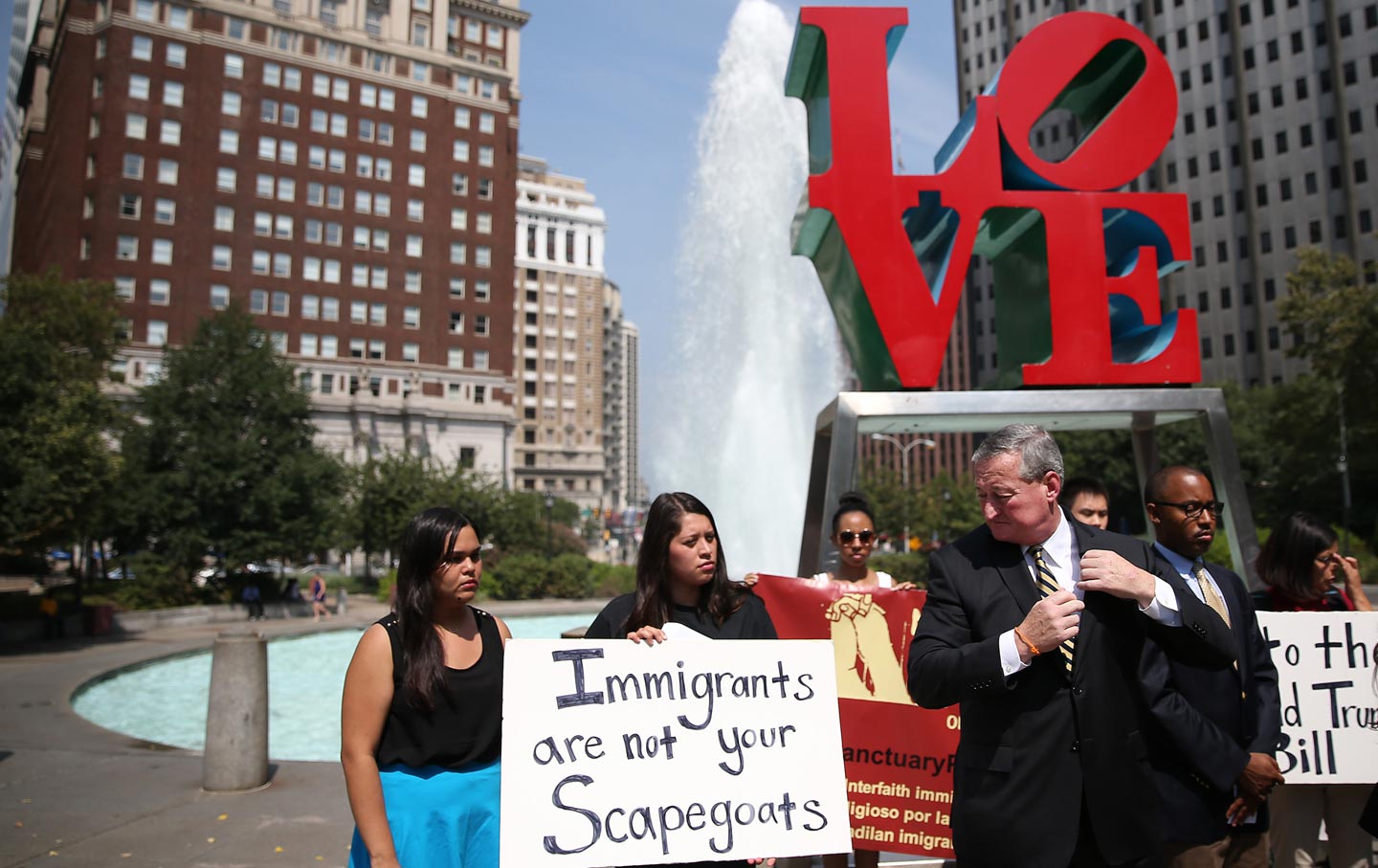 Donald Trump’s election signals the beginning of a potentially terrifying new era for immigrants across this country. His campaign focused on building a wall on the Mexican-US border, banning Muslim immigrants, investing in mass deportation, and attacking the cities and jurisdictions that currently offer sanctuary to immigrants. His transition suggests he plans to follow through with many of these threats to devastate immigrant communities. Pro-immigrant cities, counties, and states need to be ready to face these threats, particularly his intention to dramatically ramp up immigration enforcement and to cut funding from jurisdictions with “sanctuary” policies that shelter immigrant communities from the most abusive aspects of enforcement.

The case for sanctuary is straightforward. Cities and states where immigrants live know too well the devastation to families and communities wrought by dragnet mass deportation policies. Moreover, when immigrants see local police as the gateway to immigration detention and deportation, they stop cooperating as witnesses and victims of crimes. As the Major Cities Chiefs Police Association has explained, that makes everyone less safe.

Trump has made clear, however, that he is less interested in creating safe and humane communities than in the political points he can score by vilifying immigrants as “criminals” and “rapists.” The pressure, then, will be on cities and states to stand up for immigrant communities and make clear they will have no part in Trump’s regime of fear and insecurity. The best way forward: adopting a complementary set of sanctuary policies that disentangle local criminal justice systems from immigration enforcement, limit data-sharing with federal immigration authorities, and ensure legal representation for immigrants facing deportation.

In addition to these defensive strategies, local and state leaders must also go on the offense wherever possible and articulate a pro-immigrant agenda that demonstrates what progressives stand for: keeping families together, fostering community, and embracing opportunity for all. In what follows, we lay out how cities and states can defend and create strong sanctuaries that advance this inclusive vision.

The first step for cities and states is to limit cooperation with Immigration and Customs Enforcement (ICE)—and, where they have already restricted such cooperation, to strengthen these efforts. In 2014, hundreds of localities around the country chose to end or substantially limit cooperation with a federal program called Secure Communities (which was then rebranded as the Priority Enforcement Program). The program redirects routine criminal fingerprint queries sent by local law enforcement agencies to the FBI (before people have been convicted of anything) and sends them to ICE, which in turn checks to see if the person has violated US immigration law. ICE then requests that local law enforcement facilitates that person’s transfer into the agency’s custody. Those transferred are then taken to ICE detention, after which many are then returned to their countries of origin and separated from their families in the US.

Thus far, unable to stop the FBI from redirecting fingerprint queries, many cities, counties, and states simply refuse to work with ICE to facilitate such transfers from their jails. They do so for two reasons: first, federal courts ruled that holding people in jail without cause under these programs violates their constitutional rights. Second, the nexus between ICE and local police and jails undermines public safety.

Under a Trump presidency, jurisdictions that have already stopped honoring certain ICE requests must protect their policies. This will involve holding the line against fearmongering around “criminal aliens” and refusing to be cowed by threats of federal funding cuts. Meanwhile, cities and states without existing sanctuary policies should adopt them swiftly. In places like New York City and California, they have spared thousands of immigrant and mixed-status families from being torn apart, while also improving public safety. States can also play a critical role in disentangling local criminal justice systems from immigration enforcement by renegotiating their fingerprint-sharing agreements with the FBI to ensure state fingerprint queries are no longer misused for immigration enforcement.

The Constitution ensures that neither Trump nor the Republican-dominated Congress can draft cities and states into abusive federal immigration enforcement activities, but efforts to defund sanctuary cities are surely coming. Senate Democrats will be the first line of defense against the ill-advised defunding legislation being contemplated by Trump’s team. Fortunately, the Constitution also imposes some important limits to ensure that the federal government does not use its spending powers to coerce local governments. Nevertheless, cities and states may eventually face hard choices about giving up some federal funds to maintain the integrity of families and ensure public safety. Democrats from the national to local levels must stand strong against defunding threats.

Finally, localities and states should pay careful attention to the data they collect and share. All residents, regardless of their immigration status, should have access to city and state services without fear of negative immigration consequences. To promote such confidence, agencies should avoid collecting information about immigration status and install the most robust privacy protections permitted by law—ensuring local data is not misused for immigration enforcement.

States and cities should ensure proper legal representation in immigration matters, starting with investing in universal representation for those facing deportation. The need for representation under an emboldened enforcement regime is intuitive and urgent. Detained unrepresented immigrants have virtually no chance—just 3 percent, according to a 2016 report by the American Immigration Council—of prevailing in deportation proceedings. But preliminary data from the New York Immigrant Family Unity Project (NYIFUP), which guarantees representation to all detained immigrants in New York City, shows that lawyers can improve immigrants’ chances of success tenfold. This benefits immigrant families enormously—and it benefits the communities in which they live. NYIFUP has shown this approach’s promise; other cities and states should emulate it.

Cities and states should also increase funding for general immigration legal services. Many undocumented immigrants actually have legal pathways to regularize their status; for instance, victims of domestic violence, those facing persecution, and certain groups of young people are all eligible for various forms of legal status. But they simply cannot access the status to which they are legally entitled because they cannot afford a lawyer. Funding immigrant legal services can help people navigate a byzantine system and protect their families. Moreover, as many desperate families seeking help fall prey to fraudulent immigration attorneys and non-licensed service providers, cities and states should crack down on these unscrupulous actors.

Third, real sanctuary requires reforms to limit immigrants’ contact with the criminal-justice system. The Trump administration, given its absurd estimate that there are 2 to 3 million “criminal aliens” whom it will prioritize for deportation, is likely to include as “criminals” all those who have been arrested, regardless of whether they were guilty or convicted. The federal government has used the term before to exaggerate the criminal behavior of immigrants caught in ICE’s dragnet. This will get much worse for the next four years. Where immigrants have any interaction with the criminal-justice system, they will be deemed “criminals” and become priorities for enforcement.

Cities and states must therefore reduce immigrants’ contact with the criminal-justice system and mitigate the impact of prior contact. Governors should start by pardoning broad groups of immigrants with minor or old convictions. Crimes as minor as jumping a turnstile can trigger deportation, even for immigrants with lawful status. A pardon would help ensure that a minor infraction does not become a pretext to destroy a family. Bold action from governors could protect hundreds of thousands of families nationwide.

States should also provide driver’s licenses to all qualified motorists, regardless of immigration status. This policy, already in place in many states like Connecticut and Colorado, makes sense regardless of who occupies the White House, as it advances public safety by making sure that all drivers on the road are tested, licensed, and insured. It is also a critical component of protecting immigrant families. In states that keep drivers’ licenses out of the hands of undocumented immigrants, these community members still often live in suburban or rural areas where driving is essential to get to work or take one’s children to the doctor. The lack of access to licenses often leads to traffic violations for these motorists, who then become more likely to be detained by ICE.

Finally, states and localities should take affirmative steps to ensure immigrants’ well-being and access to opportunity, especially vis-à-vis health care and higher education. With the Affordable Care Act and much of our nation’s social safety net under threat, immigrants’ access to health-care services will be in jeopardy. Cities and states should respond by investing in health care for immigrants—both to benefit immigrant communities and as sensible public policy for all, since having anyone in our communities without access to health care presents a health risk to all residents.

This menu of options is not exhaustive, but it begins to sketch a road map for progressive local and state officials. While the Trump administration tries to criminalize immigrants and devastate their families, progressives must play strong defense—in particular, by drawing a bright line between local and state government and ICE’s efforts to devastate communities. But pro-immigrant leaders must simultaneously advance a positive vision of tolerance, welcoming, and equal opportunities for all.

Faced with a hostile federal government, cities and states must lead our nation by adopting strong, humane, progressive immigration policies. By offering strong sanctuaries and welcoming communities, our governors, mayors, and local legislators can help our country begin to imagine a post-Trump America.