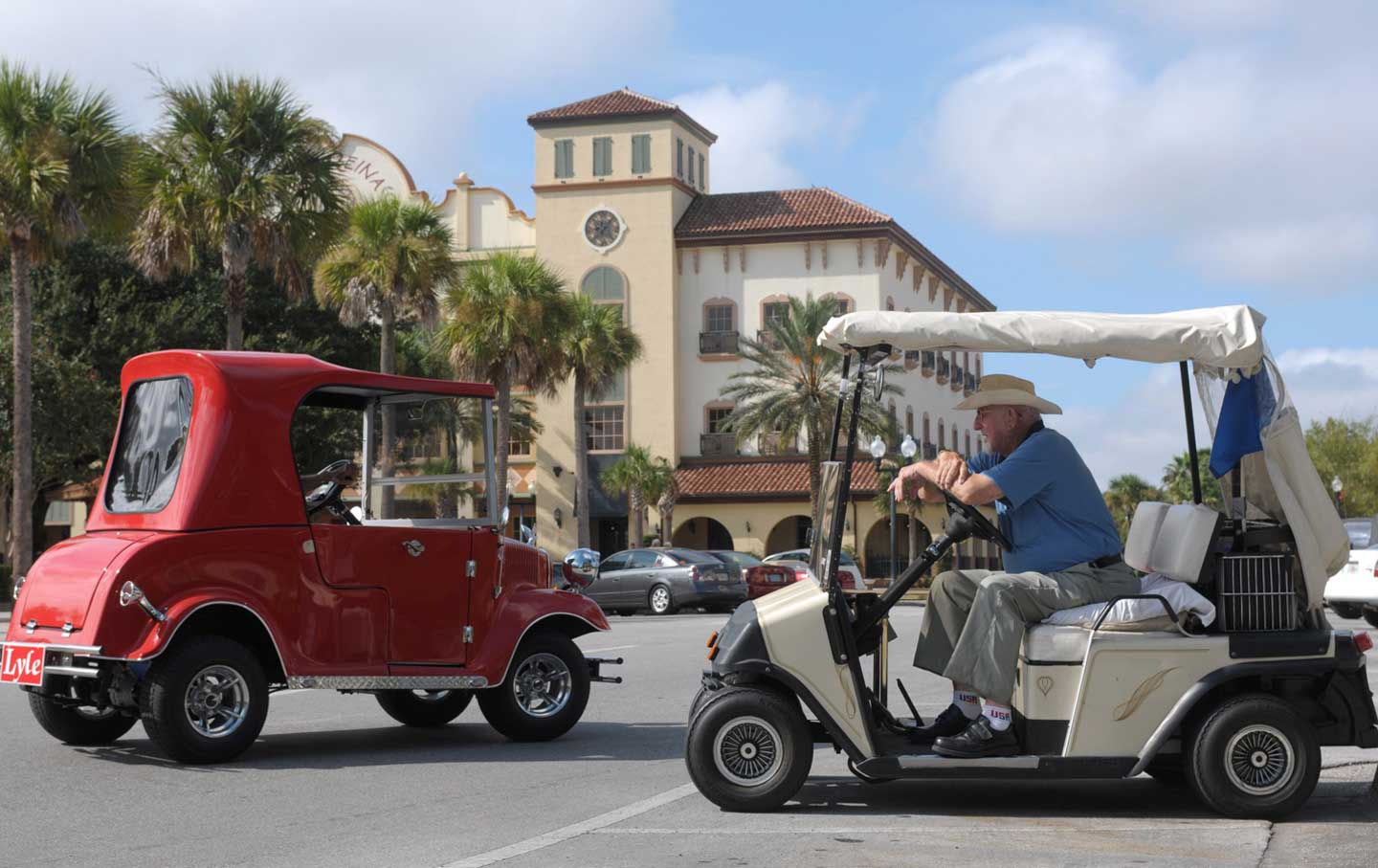 We are newly old. As life expectancies have lengthened and the rates of childbirth and premature mortality have dropped, the world population aged 60 and over tripled to 600 million in the latter half of the 20th century, and is expected to triple again by 2050. Moreover, said population is growing more rapidly than the population as a whole, at a ratio of 2.6 to 1.1 percent per year. In 2047, the number of old people is projected to exceed the number of children under the age of 15 globally for the first time in human history.

The result, broadly, of worldwide trends in economic growth, industrialization, and related advances in healthcare and technology, this gerontic condition has been greeted with both praise and trepidation, assessed varyingly as both a “longevity revolution” and a “demographic time bomb.” Whether this shift is to be feared or embraced, it is giving rise to novel forms of aging. Perhaps the most interesting of these is the young-old, the focus of Danish architect Deane Simpson’s recent book Young-Old: Urban Utopias of an Aging Society (Lars Müller; $50). Coined in 1974 by gerontologist Bernice Neugarten, the term describes a resoundingly healthy and surprisingly independent subgroup of the elderly, who, thanks to the also relatively new—and perhaps increasingly precarious—institution of retirement, as well as the decline of multigenerational living, are freed in their advanced age from the demands of work, education, and family. Rejuvenated by organ transplants, breast implants, and libido enhancers, able to afford doses of Botox, canned oxygen, and hormonal anti-aging treatments, the young-old is a sort of leisure-naut, tasked with exploring an unheard-of amount of unstructured time.

Simpson aptly describes the situation as a crisis of precedent, referring to the young-old’s “lack of existing scripts and protocols directing how, where, and with whom persons might live in this new, historically unprecedented phase of life.” His book surveys some of the responses to that crisis, focusing on a number of age-specific communities singularly devoted to the pursuit of leisure. Simpson’s analysis revolves around a set of case studies: three historical, four contemporary, mostly in the United States but also in Spain and Japan. There’s an air of utopia about them that’s both earnest and calculated. As the young-old search for ways to live their lives, real-estate developers realize there’s money to be made.

What do these resulting “utopias” look like? Their roots run back to the establishment in the 1950s and ’60s of age-segregated retirement communities like Arizona’s Youngtown and Sun City, whose successes set the standard for what’s followed. The young-old gravitate to places in the equatorial band described by Spanish architect Juan Palop-Casado as the “geometry of paradise.” Enjoying year-round access to the sun, these communities are inhabited mostly, if not entirely, by retirees, whose needs and requirements are catered to above those of other demographics; and the locations are usually aggressively sold by developers as resembling theme parks you can live in—lifetime vacation spots. Overt theming of place is important, as it allows the young-old to establish a particular sense of locale unique to them. See, for example, the retired British migrants who, taking advantage of European Union policy granting freedom of movement and the ability to buy property throughout the continent, have colonized Spain’s Costa del Sol from the bottom up as consumers, building a monoculture of British pubs, Anglican churches, and English bookstores. There, in what its residents call “Europe’s retirement home,” as Simpson notes, the retirees have created a non-place somewhere between an imaginary, idealized Spain of infinite sun and repose and the historical Britain of their past. Or, to look to Simpson’s other non-American example, one can live in an actual theme park like Japan’s Huis Ten Bosch, which has attracted upward of several million visitors per year as a sort of Platonic ideal of a Dutch town. Residents and out-of-towners (¥4,800 for a one-day pass) can stroll along Dutch-style canals, walking over bricks actually imported from the Netherlands, and enjoy Dutch-themed events like horse parades, tulip festivals, and cheese-making workshops led by Dutch agronomy students.

Simpson spends the most effort in Young-Old detailing The Villages, which, to continue the theme-park motif, was envisaged by its founders as a “Disney World for Active Retirees.” Based in Sumter County, Florida, and boasting over 100,000 inhabitants, The Villages is the largest single-site retirement community in the world. According to population projections, if it were to formally incorporate as a city, it could be the 14th-largest in the state. One does not buy a residence in The Villages as much as a “lifestyle,” as the development’s advertisements put it, a way of being that synthesizes the American Protestant work ethic and the dream of the permanent vacation into what Simpson describes as the “hyperactive adult (leisure) lifestyle,” in which retirement time is disciplined and leisure is made busy with endless organized activities: from barefoot beachcombing clubs to Tahitian dance classes to golf-cart drill teams (golf carts are the primary means of getting around the development, whose parking and road infrastructure reflect the residents’ vehicular preference).

It’s difficult to generalize from Young-Old and discuss the population at large. Simpson is aware of this, referring to the “extreme quality” of his case studies, though he insists that each one “is an entirely real physical urban setting inhabited by considerable numbers of people,” demanding to “be taken seriously as a true story.” One notices the tendency toward homogeneity—like seeking like in their pursuit of leisure. There’s the uniformity created by age segregation, with some communities overtly barring younger residents and others attempting, through Villages-style leisure-work, to fend off the specter of what’s to come—that is, the old-old, those ailing and dependent seniors living in institutional arrangements that weigh so heavily in the cultural imagination (though, to be fair, the nursing home and its ilk actually house a very small portion of those 65 and older—only 4 percent in the United States in 2009). Race and economic standing are also pretty uniform in these communities, which tend to be ethnic enclaves of people doing well enough to retire: The Villages is 98.3 percent white.

Looking to the future, with more baby boomers joining the young-old ranks, it’s unclear whether these situations will become more common, studding the world’s warmer climes with a niche retirement community for every theme and young-old sociodemographic imaginable. It’s possible that climate change will wreck the geometries of paradise, making these coastal and desert territories uninhabitable, whether underwater or overcooked. There’s also the question of economic instability: As Simpson observes, the crisis of precedent is accompanied by the less utopian crisis of dependency, as the viability of national economies is threatened by the “expanding pension and healthcare costs of ever greater numbers of elderly, supported fiscally by ever fewer numbers of working-age people.” He notes that some residents of The Villages take second jobs, not only because they view leisure as work, but to keep financially afloat. As Jessica Bruder wrote last year in her Harper’s article “The End of Retirement,” American retirement’s existing supports are being knocked away, as the recession chews up people’s savings and pensions are replaced by 401(k) plans that often provide a fraction of the former’s financial support. (Social Security, the third leg of the retirement stool, as economists describe it, is what’s threatened by Simpson’s dependency crisis.) Bruder cites a 2013 AARP survey stating that only 17 percent of Americans between 50 and 65 years old anticipate not working at all in their later years.

In “The End of Retirement,” Bruder surveys the same group as Simpson does in Young-Old’s final case study, a nomadic senior recreational-vehicle community that spans the entirety of the United States. But while Simpson focuses on the community’s middle-class retirees, Bruder charts the rise of “downwardly mobile older Americans” scouring the country in motor homes for low-paying, grueling work. Having become “geriatric migrant labor, meeting demands for seasonal work in an increasingly fragmented, temp-driven marketplace,” these self-described “workampers” toil for up to 12-hour shifts in subfreezing beet fields and giant, knee-ruining, concrete-floored e-commerce warehouses. Amazon’s CamperForce program is, according to Bruder, the largest and most rapidly expanding employer for workampers.

Imagine this trend reversing and everyone having an opportunity to retire, whether by some economic miracle reinstating the American retirement dream, or, as is often bandied about now, by the somewhat more dystopian prospect of computerized automation making much of human labor obsolete, driving vast swaths of the population, young and old, out of work (rendering “opportunity to retire” a classic case of doublespeak). How might we live in that post-work world in which we are long on time but short on everything else? What could the leisurely life entail then? Would it resemble Young-Old’s case studies, or something else entirely?

Perhaps such speculation is useless. If the majority of Americans ages 50 to 65 don’t think they’ll ever be able to retire fully, I, at 25, am convinced that I won’t be able to either. And if I agree with Simpson’s appraisal in a recent Metropolis interview that these communities are highly securitized, privatized, and segregated dystopias in denial that the process of aging entails the possibility of decrepitude and dependency (though that sentiment goes somewhat unarticulated in the book itself), my quickly imagined alternative is a world in which I can work on what I want, a sadly telling choice of verb.