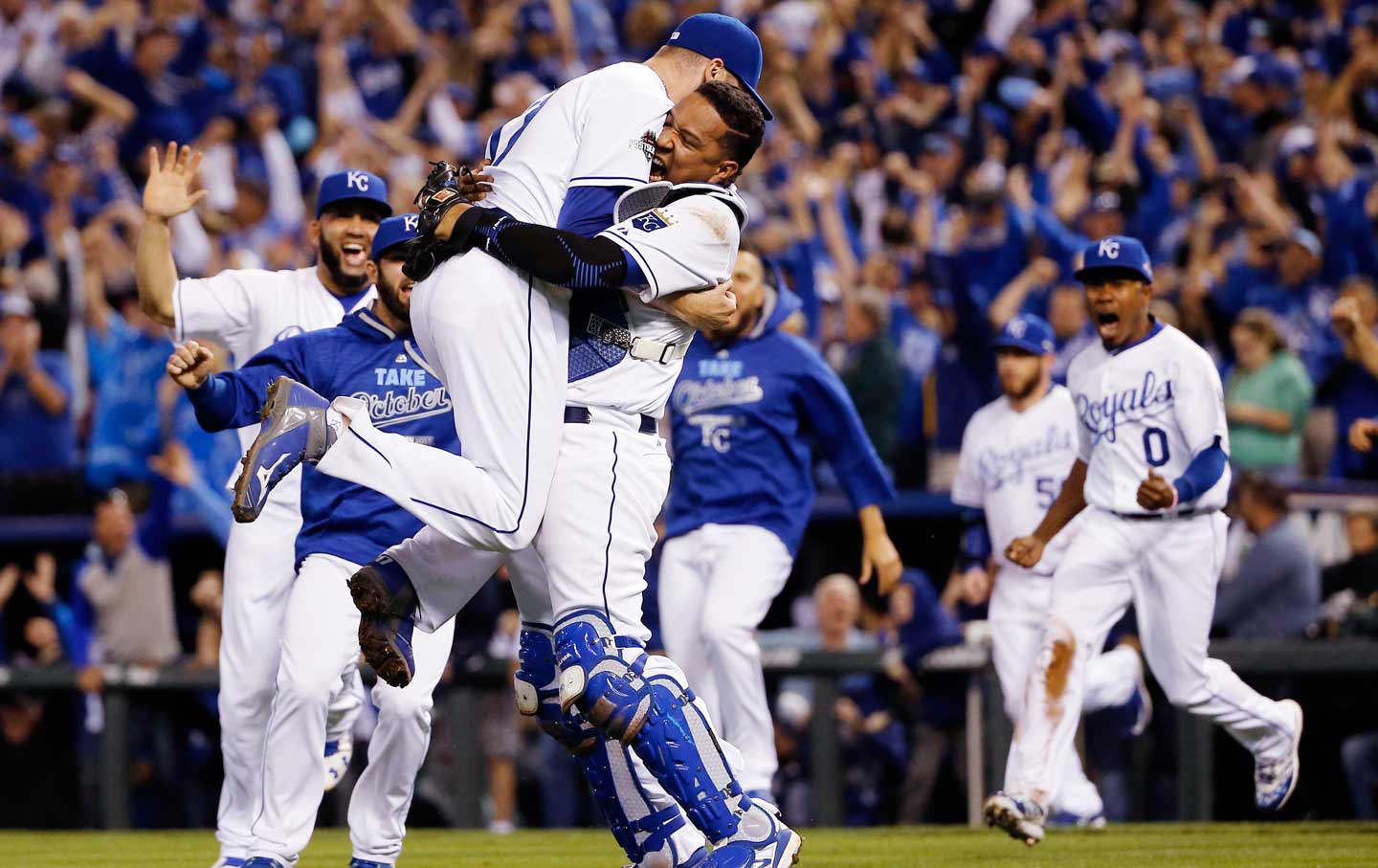 Conflicting styles make or break great fights. Ali v. Frazier was a great fight. Ali v. Wepner was not. The 2015 World Series on paper looks like it could be the former: a clash of contrasting, intriguing methodologies and matchups.

The New York Mets are led by four young, flame-throwing starters whose names are already starting to become local lore: Harvey, DeGrom, Syndergaard, Matz. Each tops 95 miles per hour on the radar gun with little effort and had his National League playoff opponent on the Chicago Cubs swinging at the ghosts of baseballs passed. But the free-swinging Cubs are not the Royals. The Royals are a squad that by a significant margin strikes out less than any team in the Majors. Every at-bat will be part chess match, part blind gamble, where the Royals will dare the young Mets pitchers to throw strikes and the Mets Four Horsemen will throw fat fastballs around the plate and dare the Royals to swing.

But this World Series represents more than just series of tantalizing face-offs. It also has some historical bite. Baseball has long been looked at as a mirror of where we are as a country on issues of race, “a canary in the coal mine,” to quote sports sociologist Dr. Harry Edwards. This World Series offers a particularly bracing and lucid look. In the entire 112-year history of baseball’s championship round, we are presented for the first time with a Fall Classic pitting two teams that never fielded all-white, segregated rosters.

The Mets and the Royals, two teams that came into the league in 1962 and 1969, respectively, entered after the smashing of the color line and never looked back. Jackie Robinson desegregated the game in 1947, and it is fascinating that this is the first time two post-1947 expansion teams have met. On one level, this is a tribute to the historic institutional power of baseball’s great teams that thrived under segregation like the Yankees, the Cardinals, and the Dodgers. (The Cards and Dodgers in particular had post-1947 success when they took integration seriously, stocking their rosters with black talent.) Yet franchises maintained quotas for decades to ensure that their integrated teams would not become too integrated. It was in 1971 when the Pirates fielded the first all-black-and-brown starting nine.

Still, it is remarkable, given the success that so many post 1947 expansion franchises have had, that this is the first time the stars have aligned to see two of these franchises meet in the big dance. It is also worth remarking upon for reasons beyond historic curiosity. Even with the absence of a segregated past, the Mets have just one black American player on their playoff roster, Curtis Granderson. The Royals will be starting, barring injury, one black American player, Lorenzo Cain. Both teams employ several players of African descent from Latin America. This all speaks to the oft-discussed issue of the work baseball needs to do if it is going to find purchase in the black community in the United States. I refer all questions on this to Chris Rock, although I’ll also add that baseball’s rush to invest billions in the Dominican Republic to develop players cheaply while publicly funded urban baseball programs are being slashed plays a major role in this.

Here is that pitiless mirror baseball holds up: The National Pastime has become perhaps our clearest cultural reflection of how globalization, de-industrialization, and the subsequent gentrified looting of urban America have wrung so many US cities dry. Baseball, with its need for leagues, coaching, equipment, and players has suffered more than any other urban endeavor. This game that was once a cohesive glue, a “great teacher” of integration and the values of immigration, should never be a symbol of what divides us, but this is where we are. At least within the borders of the continental United States, baseball has, tragically, become the new lacrosse.

It would be one thing if baseball recognized this and fought ferociously to make the game more open and available–dramatically expanding its own RBI (Reviving Baseball in Inner Cities) program for example–but the opposite is the case. This World Series might in a subtle way turn the page on the pre-1947 era. But the positions of power maintain a disturbingly pre-1947 look. As I wrote about in greater detail last week, there are no black American managers now and, even more gobsmackingly, only one Latino manager. It is so glaring that Ken Rosenthal wrote this about this issue for Fox Sports: “If you’re a minority, minor-league manager or longtime major-league coach, you probably can forget about managing. And if you’re an analytics-minded, Ivy League graduate, you’ve got the inside track to becoming a GM. Welcome to the new-boy network, in which the best way to become a GM is to present your fancy degree to an owner, and the best way to become a manager is to enjoy a close relationship with the GM.”

In other words, the correct social circles and elite colleges are the glue that brings upper management together. It sounds, again, way too much like lacrosse.

Baseball’s mirror demonstrates something that we might not want to see, especially on the cusp of the Fall Classic: that connections, class privilege, and whiteness are baseball’s new affirmative action, which looks a hell of a lot like the old affirmative action, except injected with some 21st-century designer steroids. This affirmative action is so powerful, it does even not feel the need to acknowledge its own existence.

It is difficult in writing about “baseball’s mirror” not to recall Jackie Robinson saying in speeches, “If I had to choose tomorrow between the Baseball Hall of Fame and full citizenship for my people, I would choose full citizenship time and again.” He chose full citizenship, but the Powers That Be made clear that it was not his choice to make. He got the Hall of Fame. In a country where the assertion that “black lives matter” is deemed controversial, full citizenship remains a point of debate instead of a self-evident fact. Baseball’s power as a mirror is still unerring. We have a World Series that symbolizes a step away from a racist past, while mired in an all-too-familiar present.