An allegation of attempted rape leveled at US Circuit Court Judge Brett Kavanaugh, President Donald Trump’s pick for Supreme Court Justice, has put the nomination process in flux, and (at least momentarily) changed the political dynamic for Senate Republicans trying hard to push the confirmation through ahead of the November elections. But for so-called “red-state Democrats”—Democratic senators up for reelection this year in states won by Trump in 2016—the politics of a Kavanaugh vote remain decidedly stable: A “No” on confirmation is not only consistent with the ideals of the party; it is also the way to win.

Talking heads and media pundits have presented the Kavanaugh nomination as a difficult choice for senators like Indiana’s Joe Donnelly, North Dakota’s Heidi Heitkamp, or West Virginia’s Joe Manchin—one that pits rejecting Kavanaugh against keeping their Senate seats. But new data from Demand Justice and YouGov Blue suggests it’s a false dichotomy: Kavanaugh does not enjoy majority support of the electorate in any key states; independent and undecided voters don’t expect a Kavanaugh vote to affect their election choice; and, perhaps most critically, voting for Kavanaugh risks demobilizing the base Democratic voters red-state senators will need to survive.

A new Wall Street Journal/NBC News poll shows that, while support for the Kavanaugh nomination has remained fairly steady at an unremarkable 34 percent, opposition has increased markedly to 38 percent, up from 29 percent just a month ago. Among women, Kavanaugh’s negatives are even higher: 42 percent oppose the pick, while only 28 percent are in favor. (Among college-educated women, 49 percent oppose.) In fact, these low-and-getting-lower levels of support for the Kavanaugh nomination have been unprecedented from the start. Traditionally, Supreme Court nominees have enjoyed decent approval numbers upon introduction to the public, and pluralities of Americans have supported most confirmations. Gallup polling found net positive support for each of the last four nominees: Neil Gorsuch (+13), Merrick Garland (+23), Elena Kagan (+10), and Sonia Sotomayor (+19). Even George W. Bush pick Harriet Miers, who was seen at the time as wildly unpopular, and whose nomination was pulled after less than a month, was only net negative by one point.

National toplines, however, don’t always accurately describe the political dynamics felt by each individual senator. To that end, Demand Justice commissioned polling from research firm YouGov Blue, which was shared with The Nation. Survey results suggest that Democrats in the key battleground states of Florida, Indiana, Missouri, and North Dakota want their senators to remain united in opposition to Kavanaugh, and that a vote for Trump’s nominee could actually worsen the reelection prospects of all of the supposedly imperiled senators. Among the total electorate, support for Kavanaugh’s confirmation was below 50 percent in all of these states—even before assault allegations surfaced—and supporters only barely outnumbered the opposition in Indiana (39 percent support, 34 percent opposed) and Florida (37 percent in support, 32 percent opposed). Among Democrats alone, opposition to Kavanaugh outpaces support in every state in this survey.

While opposing Kavanaugh appears to pose very little risk for the Democratic Senate incumbents, there is real danger for them should they chose to align with the GOP. The survey asked respondents whether they would be more or less likely to vote for their senator if that senator voted for Kavanaugh, and in none of the polled states did Democrats show they’d be more likely to support the incumbent if that senator voted to confirm. Further, among these Democrats, the net decrease in support triggered by a pro-Kavanaugh vote ranged from seven points in West Virginia to a seismic 27 points in Indiana.

These findings line up with earlier analysis, suggesting Kavanaugh’s naked judicial hostility to the poor and working class could provide red-state Democrats with a natural point for political gain. Case in point: the fight over health care. YouGov Blue told respondents, “In the 2011 case of Seven-Sky vs. Holder, Kavanaugh refused to uphold key patient protections, including those for patients with preexisting conditions,” and asked if that would affect whether they supported his confirmation to the Supreme Court. In West Virginia, 50 percent of likely voters said this made them less likely to support him (35 percent much less likely), compared with only 10 percent who said it would make them more likely. In Florida, 48 percent of likely voters said that Kavanaugh’s position on preexisting conditions would make them less supportive (38 percent much less), while only 12 percent said they would be more supportive. These numbers are consistent across the states polled.

Ady Barkan, the co-director of Be a Hero, a group he helped form to protect government health-care programs from congressional budget cuts, and himself a father battling ALS, will be heading to Washington, DC, Monday to oppose Kavanaugh’s nomination. “I’m fighting this nomination with my last breath,” Barkan said. “It’s time for Democrats to stand with their base and vote against this nomination.”

Indeed, undecided voters do not consider a senator’s stand on Kavanaugh particularly important. More than two-thirds of Indiana voters said the Kavanaugh nomination would have no influence on their choice in the Senate race—and that was the lowest total of the states polled. In Florida, North Dakota, and West Virginia, 80 percent of undecided voters said the battle over Kavanaugh would not affect their decision come November.

With the midterms looming, Republicans were working to speed up Kavanaugh’s confirmation, even before the sexual assault allegation surfaced—but voters don’t feel the same need to rush. YouGov asked whether respondents believed Kavanaugh’s confirmation process should be slowed until all of the documents related to his past work was made available (with an estimate that this would take until October), or whether they agreed that “A Supreme Court nomination is too important to be held up to partisan stalling tactics.” In Florida, Indiana, Missouri, North Dakota, and West Virginia, majorities of “undecided/other” voters agreed (63 percent, 70 percent, 59 percent, 53 percent, and 84 percent, respectively) that the Kavanaugh nomination process should be delayed until his full record is available. In every state, likely voters said they’d rather see all documents released. Given the events of the last week, it’s unlikely voters in these states have any stomach for continuing the breakneck pace of confirmation. 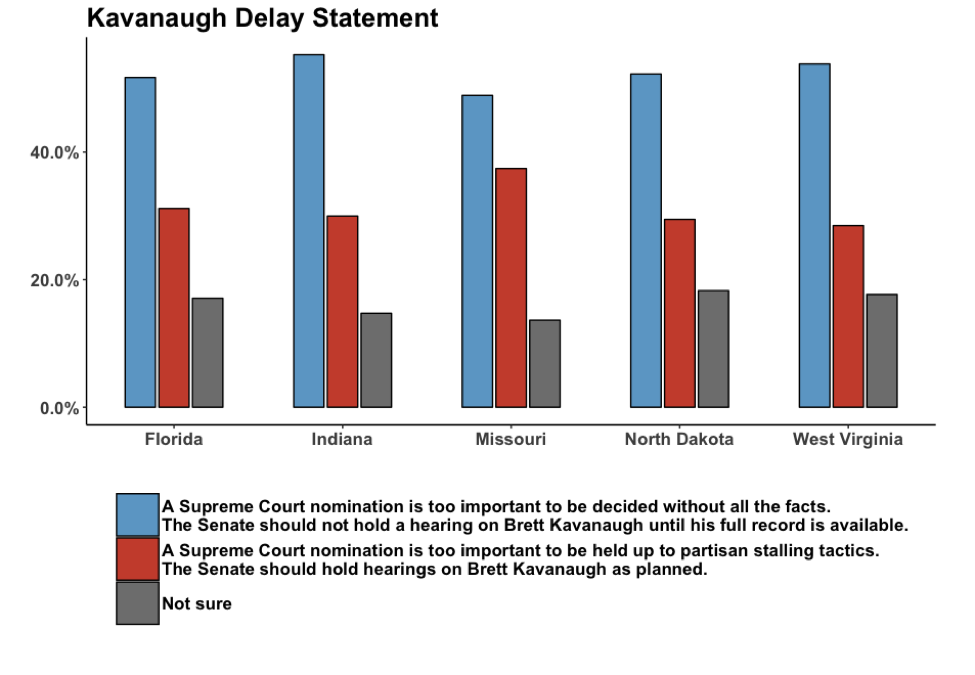 The conventional wisdom, that Republicans care more about Supreme Court nominees, may be changing. For instance, a crowdfunding campaign to support a challenger to Maine Republican Senator Susan Collins, if she chooses to vote for Kavanaugh, has raised nearly $1.5 million. And that engagement can cut many ways. “Brett Kavanaugh was already the least popular Supreme Court nominee ever, even before Dr. Blasey Ford came forward”, said Brian Fallon, executive director of Demand Justice. “If any red-state Democrat is still thinking of voting for him after these very credible sexual-assault allegations, they should expect an intense voter backlash from women and progressives.”

As the data make clear, the proffered choice—that red-state Democrats need to support Kavanaugh to keep their jobs—is a false one. Democratic voters want to see their representatives fight for Democratic values; a vote to confirm this far-right jurist could dishearten progressives across the country, and discourage turnout in Senate elections.

“Democratic incumbents have more to lose by selling out their base than they do by taking a principled stand against a judge with a concealed past appointed by an administration mired in controversy,“ observed YouGov’s Ray. “In a year with such a narrow enthusiasm gap in red states, incumbent Democrats need to take this decision seriously.”

YouGov Blue partnered with Demand Justice to field a survey of 2,717 likely voters in five states: Florida, Indiana, Missouri, North Dakota, and West Virginia. The survey was conducted online from August 24 to September 1 of this year.