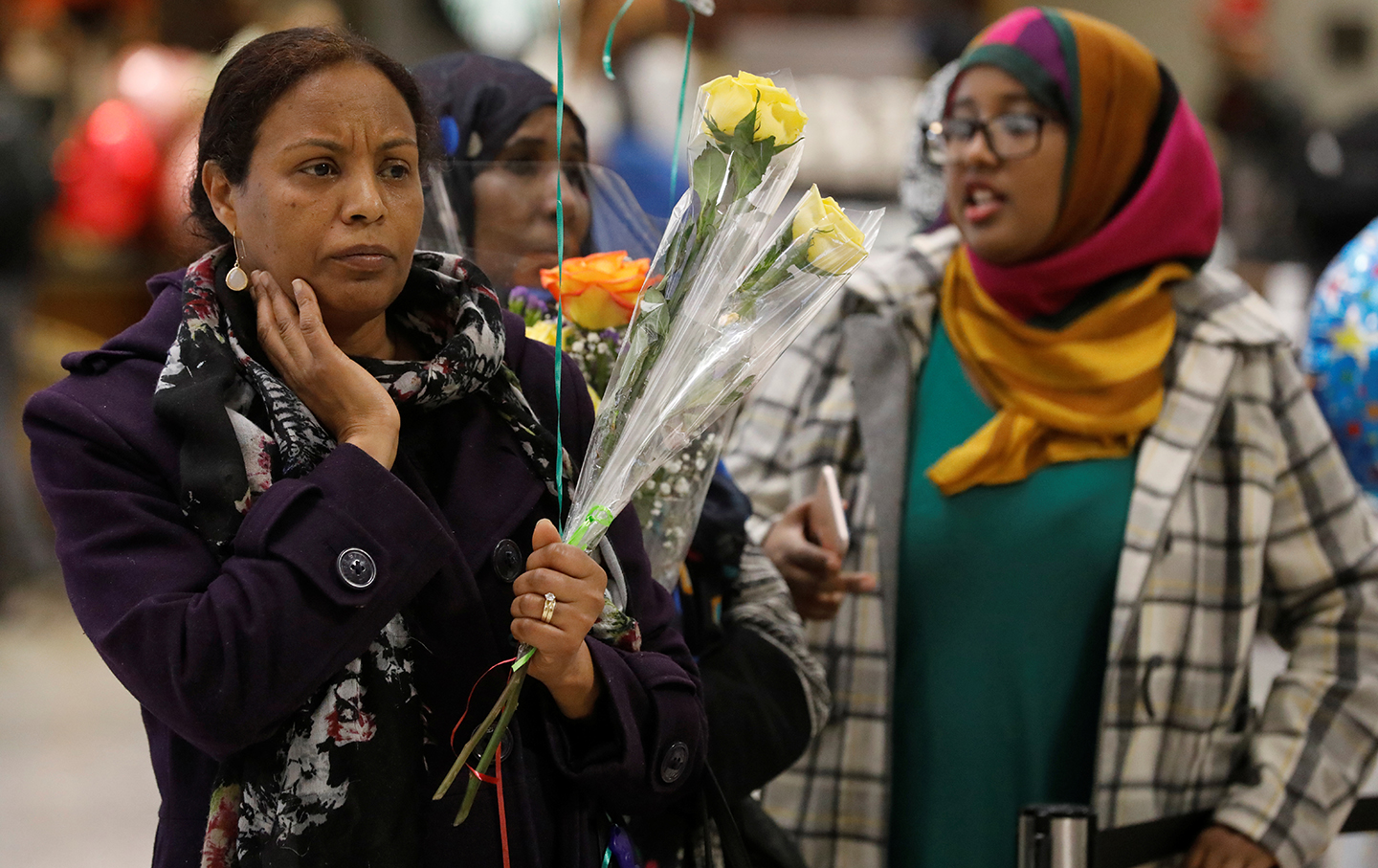 People wait to greet their Somali family members who were initially denied entry into the US because of the recent travel ban, at Washington Dulles International Airport, February 6, 2017. (Reuters / Jonathan Ernst)

Federal Judge James Robart’s temporary nationwide block against Donald Trump’s dangerous executive order on immigration has, predictably, infuriated the president, who lashed out at the Seattle judge in personal terms and vowed to fight the stay in court, setting up a constitutional crisis.1

Following announcement of the ban, the stories of confusion and chaos came flooding in from airports: from the Somali mother of two held for twenty hours without food at Dulles airport, even though her children were US citizens, to the Yemeni brothers en route to Flint, Michigan, to reunite with their father, but who were detained at Dulles, coerced into relinquishing their green cards, and forced on a flight to Ethiopia.2

Nor was it clear if the Trump ban applied to dual nationals—those born in one of the seven countries but who hold other passports. On the day after the EO was released, The Wall Street Journal was reporting that it did. I realized then that this ban could apply to me. Thus began my week of fear, with anxious calls to lawyers in New York City. I was born in Somalia, but I fled to Britain as a child because of war and famine in my native land. I have since acquired British citizenship through naturalization, and I am here in the United States on a valid multi-entry visa on my UK passport.3

The federal court’s stay is only temporary, and the ban may well be reinstated.

The Trump ban has unfairly targeted people like me, with valid visas or green cards, simply because of where we were born. For President Trump, it was the stroke of a pen on a piece of paper, but for many desperate refugees and citizens from those banned countries, his decision imposes huge personal costs, leaving many of us in limbo.4

When the news came that British citizens like me would be affected, the UK government sought assurances from Washington, which they initially received. But last Monday the US Embassy in London put a statement on its website stating that the ban did include dual nationals. As if things weren’t confusing enough, later that day British Foreign Secretary Boris Johnson received further assurances from US authorities, saying that the ban would make “no difference to any British passport holder irrespective of their country of birth or whether they hold another passport.” Even so, the British government was too slow in reacting to the ban. Prime Minister Theresa May initially refused to condemn it, but on Wednesday she said it was “divisive and wrong.”5

For me, at least, things have become clearer. Still, this is far from over, and the ban may well be reinstated (the Justice Department is expected to file an appeal against Robart’s stay today, and whichever side loses will no doubt appeal to the US Supreme Court). For Somalis who don’t have the privilege of a British passport, this means more anxiety. Those like Shukri Ali, a 19-year-old student from Somaliland, a breakaway region of Somalia, who was admitted into Wellesley College but who now fears she won’t be able to matriculate. Or the Iranian pop star Googoosh, who now fears she won’t be able to leave Europe to return home to the United States.6

Many of us from the seven countries had already experienced “extreme vetting” even before Trump was elected.

The Trump travel ban, as awful as it is, is not a bolt out of the sky. Many of us born in those seven countries who have traveled to America in recent years had already experienced “extreme vetting” even before he was elected. The Trump ban should be seen as the culmination of a trend, in which the rights of visa holders and US residents from Muslim-majority countries have come under intensive scrutiny.7

Until 2016, I was eligible as a British citizen to travel on the visa-waiver program, which allows the citizens of 38 countries to enter the United States for 90 days without a visa. But visitors are required to apply online for an Electronic System for Travel Authorization (ESTA), which became mandatory in 2009.8

In December 2015, Congress passed, and President Obama signed, a law that removed the benefits of the visa-waiver program for non–US nationals who had traveled to four countries after 2011—countries that were considered “safe havens” for terrorists. In February 2016, in a move sparked by the Paris terrorist attacks of November 2015, three countries—Libya, Somalia, and Yemen—were added to the original four as “countries of concern.” These are the seven now named in the Trump executive order.9

President Trump has accused the media of misreporting his executive order, arguing that it is not a Muslim ban and claiming that it’s no worse then the changes passed under Obama. But that’s not the case. Indeed, the Trump order is patently based on religion—that’s the intent of the ban, even if the language of the order doesn’t explicitly say so. Trump himself has said exemptions will be given to Christian refugees from Muslim countries if the refugee program starts up again. It also appears that Iraqi-born Israeli citizens will be exempt from the Trump order.10

Former New York City mayor and Trump adviser Rudy Giuliani boasted on Fox News about how he made the “Muslim ban” legal, but the multiple legal challenges will be testing that claim. House Speaker Paul Ryan tweeted in July, “A religious test for entering our country is not reflective of America’s fundamental values. I reject it.” And Vice President Mike Pence tweeted in December 2015, when he was governor of Indiana, “Calls to ban Muslims from entering the U.S. are offensive and unconstitutional.” But now Ryan insists that Trump’s order is not a Muslim ban, and other senior Republicans are supporting it as well.11

Trump’s order is not responding to an actual threat—immigrants from the seven named countries have not killed a single person in a terrorist act in this century. The ban will do little to “make America safe again,” as he has claimed on Twitter and as his surrogates are so fond of saying on cable news.12

For me, at least, a heady week of panic is at an end—as a British citizen I am assured that I should be able to return to the United States after leaving. But for my family and friends in Somalia, the ordeal has just begun.13