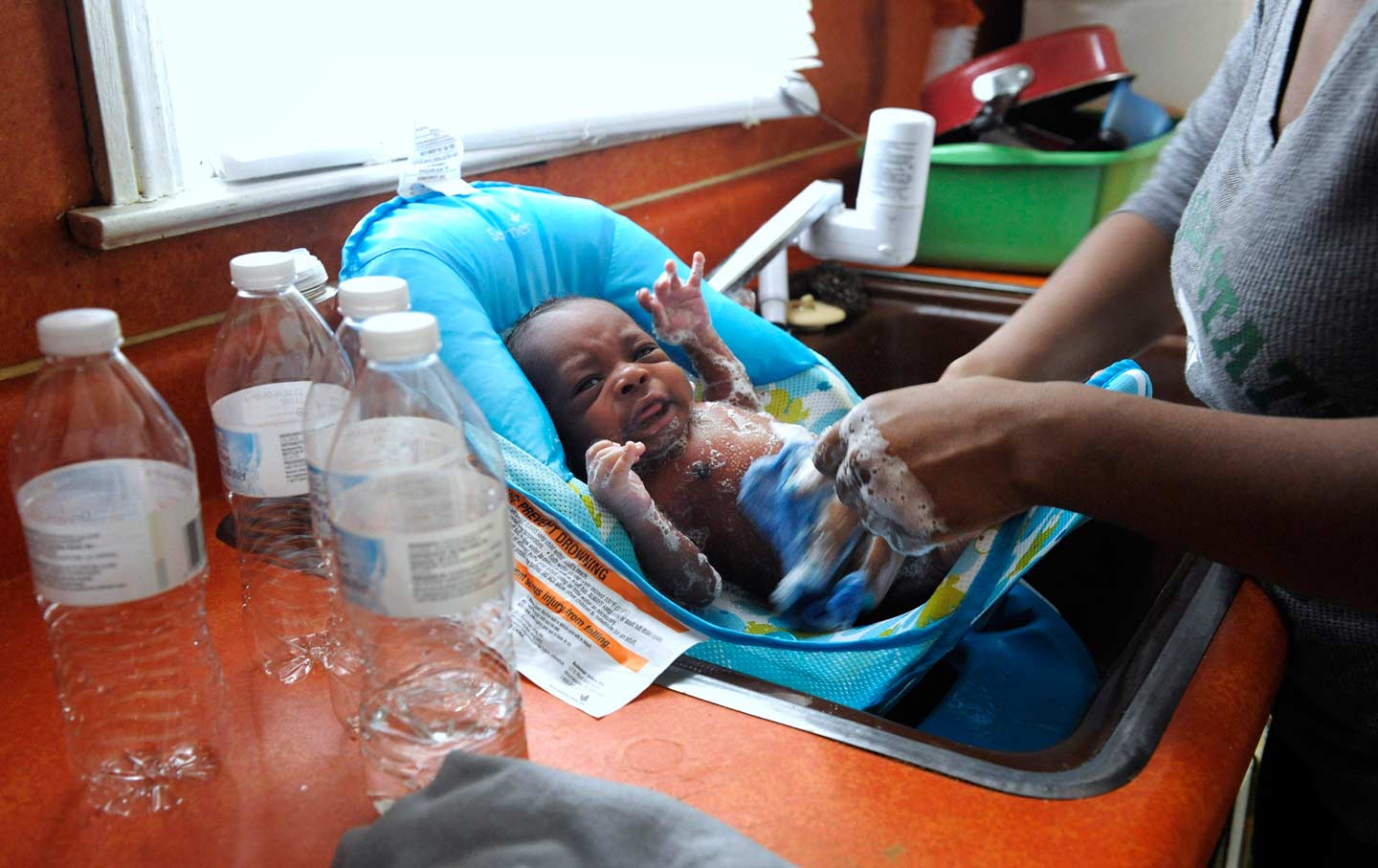 On January 28, 2016, Porshe Loyd uses bottled water to wash her three-week-old son, LeAndrew, in a baby bather in the kitchen sink at their home in Flint, Michigan. (Todd McInturf / The Detroit News via AP)

Last month, Michigan Governor Rick Snyder (R) delivered his fifth State of the State address, a ceremonious speech that typically presents the governor’s legislative priorities and vision for the year ahead. But instead of talking about pressing priorities—such as the need to reform the state’s public education system, improve its job market, or invest in its infrastructure—Governor Snyder was forced to apologize for his government’s failure to provide clean, safe water to the people of Flint, Michigan.

The Flint water crisis began in April 2014 with an effort to cut the budget. Government officials chose to switch water access from the clean Lake Huron to the more corrosive and polluted Flint River. As Curt Guyette, a journalist for the ACLU explained on TalkPoverty Radio, almost immediately residents began complaining of hair loss, rashes, and tap water that looked and tasted strange. Yet, despite calls from concerned residents, city and state officials assured the community that the water was fine. Former Flint mayor Dayne Walling (D) even drank the water on television to dissuade any further concerns. For months, nothing was done.

At the heart of current national outrage is the impact that tainted water will have on Flint residents—especially the city’s children. A study by the Centers for Disease Control and Prevention found that even minimal lead exposure can cause cognitive and behavioral issues, including an increased propensity toward violent behavior. In fact, children with lead poisoning are seven times more likely to drop out of school and six times more likely to become involved in the juvenile justice system than those not exposed to lead. Moreover, the impact of lead exposure is irreversible.

The long history of environmental racism

In the midst of this knowledge, it is hard to ignore the facts that 56 percent of Flint’s population is African American and most of the city’s residents live paycheck to paycheck. According to the 2015 Census, more than 40 percent of residents are living below the federal poverty level. Once the booming Vehicle City where General Motors was born, Flint has since lost its industrial base and, with it, government investment in all forms of infrastructure. Support for the city’s schools, public transportation, and employment has fallen by the wayside.

Still, how is it possible that, in 2016, low-income, black Americans are denied access to clean, safe water? Unfortunately, the roots of this injustice run deep.

Environmental racism is entwined with the country’s industrial past. At the beginning of the 20th century, zoning ordinances emerged as a way to separate land uses in order to protect people from health hazards. Over time, however, city planning and zoning ordinances focused less on public health and more on creating idyllic communities, protecting property rights, and excluding “undesirables.” In other words: The least desirable communities were reserved for discarding waste and marginalized people alike.

By the 1930s, federal leaders began to make large investments in creating stable, affluent, and white communities in the suburbs, while giving local governments the autonomy to neglect low-income communities and communities of color. New highways and waste facilities were constructed in marginalized communities, where they cut through businesses or homes and exposed residents to excessive pollution.

The problem of polluted black communities is not a new phenomenon. Historically, toxic dumping and the location of locally unwanted land uses (LULUs) have followed the “path of least resistance,” meaning black and poor communities have been disproportionately burdened with these types of externalities.

Environmental racism is an issue of political power: The negative externalities of industrialization—pollution and hazardous waste—are placed where politicians expect little or no political backlash.

For this reason, ZIP codes often has more of an effect on health than genetic codes. Despite legislative efforts to dismantle segregation, it remains a pernicious problem in America today. Affluent communities still adopt exclusionary zoning codes that keep less affluent households from moving in, and African American home buyers are still shown fewer homes than whites and are often steered away from predominantly white neighborhoods.

“African Americans, even affluent African Americans are more likely to live closer to and in communities that are more polluted than poor white families that make $10,000 a year,” according to Bullard. In essence, the nation’s laws are executed mostly to protect white households and leave the rest of the country to inhale the toxic fumes of racism.

A recent study in Environmental Research Letters noted that the highest polluting facilities in the country are disproportionately located near communities of color. One of the most notorious examples of this disparity is Cancer Alley, the 85-mile stretch between Baton Rouge, Louisiana, and New Orleans that is home to more than 150 industrial plants and refineries. The deadly corridor earned its disreputable name due to the sheer number of cancer cases, inexplicable illnesses, and deaths that have afflicted its residents. The ExxonMobil refinery in Baton Rouge alone is 250 times the size of the Superdome, with a surrounding population that is 78 percent people of color. Black communities and industrial sites are so closely intertwined that a number of Cancer Alley refineries include old black cemeteries that hold the remains of former slaves—a blunt reminder of just how little black lives matter on these grounds.

Standing up for environmental justice in Flint and in the nation

The road ahead for Flint is a very long one. After the immediate crisis has been addressed, it will be years before the nation can fully realize how the state affected the lives of the children it poisoned. These families need and deserve a lifetime of support. And while the country’s outrage is correct, the injustice in Flint must be viewed as one example of a widespread problem. In order to address the root causes of environmental racism, the nation must demand government accountability and effective industry regulations, support clean energy, and commit to furthering fair housing.

All levels of government must focus on investing in and modernizing infrastructure that will protect the building blocks of our society—specifically in areas where there is historic underinvestment. A $1 billion investment in infrastructure creates about 18,000 jobs, while the same size tax cut would generate 14,000 jobs and no new public asset. There is much work to be done to ensure that all communities are safe, stable places where people can thrive.

Many Americans believe that racism can be boiled down to a sin marked by slurs and men burning crosses under the cover of night. Flint serves as a stark reminder that racism is in the air we breathe, flowing freely into our homes and down the stretch of blocks riddled with liquor stores but begging for a supermarket. There is a societal cost to this reality.

The crisis in Flint has refocused the public spotlight on environmental justice. Voters and policymakers across the country should seize this moment to address the environmental racism that persists in too many communities. If the nation does not stand up against the injustice of environmental racism, communities of color will continue to be targeted. As the country becomes more ethnically and racially diverse, communities of color must have equity in the level and quality of government-provided services. Americans must lend their voices to support not just Flint residents, but also the residents of countless other communities where racism still takes a physical toll.