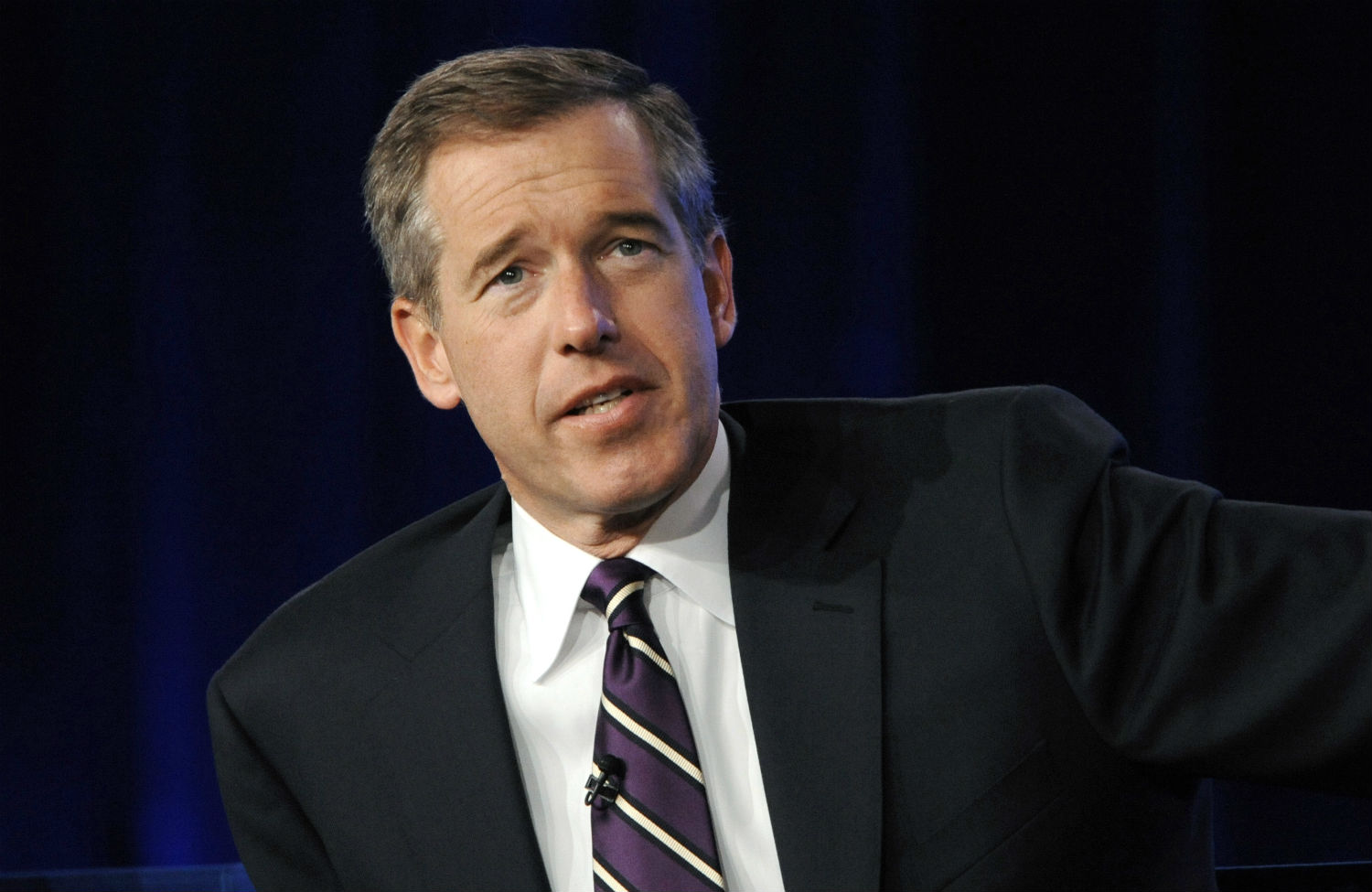 Everybody’s been asking whether Brian Williams can return as anchor of NBC Nightly News after his six-month suspension for exaggerating an attack on a helicopter ferrying him and an NBC camera crew to a military bridge site in Iraq back in 2003. It’s the big celebrity question of the week, totally replacing our collective wonderment over that weird hat Pharrell Williams (no relation) wore during his Grammys performance last weekend.

But just peaking above the surface in the past couple days is a far more important question: Will the media, prodded by what they’ve judged to be Williams’s “lies,” finally begin to question their own role in boosting the far more serious lies that led to hundreds of thousands of actual deaths in the Iraq war?

Jon Stewart, as usual, saw the ironies. After cracking some gentle jokes at his friend’s expense, Stewart allowed that he’s happy the media is piling on Bri Wi because “ finally someone is being held to account for misleading America about the Iraq war.”

“It might not necessarily be the first person you’d want held accountable on that list, but never again will Brian Williams mislead this great nation about being shot at in a war we probably wouldn’t have ended up in if the media had applied this level of scrutiny to the actual [beep] war.”

America’s corporate media has plenty of false war stories to account for—from the phony heroism of Pvt. Jessica Lynch and the unquestioning acceptance of Bush administration assurances about WMDs to Judith Miller’s lies on the front page of The New York Times and NBC axing the Phil Donahue show for “presenting guests who are anti-war, anti-Bush and skeptical of the administration’s motives.”

Only the usual suspects have continued to point out the media’s hypocrisy. Bill Moyers, for example, said, “Brian Williams’s helicopter lie is nothing compared to the misinformation spewed by US press in lead-up to Iraq War.” In a great post in Mondoweiss, Scott Long writes:

What I don’t get is why this is an issue. Williams made up a story. But he was in the middle of the most fantastic made-up story in American history. The Iraq war, written by Bush with a little help from Tony Blair and Micronesia and Poland, was a gigantic fiction, as beautifully told and expressive of the moment’s cultural mythology as The Adventures of Baron Munchausen, or A Million Little Pieces, or Three Cups of Tea. The reasons were fake, the goals were fake, the triumph was fake. Nothing was true except the dead people, who aren’t talking. The war countered imaginary threats and villainies with imaginary victories and valor. Williams added his embroidery in the spirit of invention. Why are the other tale-spinners turning on him now?

Maybe so many journalists have been drawing arrows on the big fat bulls-eye on Williams’s back—he’s been defended by notably few of his erstwhile friends in the MSM—because his problems distract from their own complicity. It’s also possible that a lot of people, and not just journos, want to avoid their own sense of shame. “[W]hat Williams did is merely an exaggerated version of what any of us might do,” Steve Almond writes. “This is why his lies so offend us. In vilifying him, we help cleanse ourselves of the hidden shame we feel at sanctifying war while living amid such decadent safety.”

It’s hard to get the media industry, much less the public, to focus on the historical big picture when there’s an individual personality so ripe for skewering. And the big picture is itself a work of corporate spin. NBC spent millions promoting Williams as a man to be trusted, endlessly advertising his nice guy bona fides and anchorly rectitude even as the network made a fetish of his father-knows-best affect.

The “NBC family” Williams heads is about as real as The Brady Bunch, and often just as annoying. During his broadcasts as the peacock network’s paterfamilias, Williams told us about his knee surgery and his daughter Allison’s role in the NBC’s version of Peter Pan. If you had a contract with NBC, your baby got airtime—viewing photos of Savannah Guthri’s new baby could make us feel as warm and purr-y as seeing all those cat videos Williams would run.

It’s not that family doesn’t matter, it’s just that nepotism should, too. Over several days last fall, CNN’s Chris Cuomo and his New Day co-hosts took us to their ancestral countries to share their colorful roots; meanwhile, the show avoids mention of a current family member, Chris’s brother, New York Governor Andrew Cuomo, whose dismantling of the Moreland Commission on state corruption was real news New Day dodged like an incoming RPG.

Corporations aren’t people, and they don’t have families, either. Look at the way NBC brutally dumped “our own” David Gregory, as if he were an obnoxious Thanksgiving guest. Maybe Brian Williams, if his credibility really seems totally unsalvageable in six months, will be joining Gregory in green-room limbo.

All this family BS is similar to the legally allowed “puffery” in advertising—buying the right car will make you sexy, renting one at the right company will make you a business legend—and it’s advertising, of course, that sustains most big media in the first place. As financial pressures continue to demolish the boundaries between advertising and editorial, fibs, frauds and outright lies come to be equated with profits. And in witty, easy-going Brian Williams NBC found an eager participant in maintaining its corporate habits and achieving its goals.

One of news media’s habits is to obscure the larger context. Remember how Christiane Amanpour was hounded out as host of ABC’s This Week in part for daring to extend the show’s “In Memoriam” segment to “all of those who died in war” rather than limit it to American service members? Remember how the same Fox News whose website showed the twenty-two-minute video of ISIS burning a Jordanian pilot alive in order to, as Megyn Keilly said, “remind people of the enemy we face” had refused to show military coffins returning home from Iraq, even when the Pentagon briefly allowed it? (Obama later lifted the ban.)

Back to Scott Long:

Why is it a scandal when Williams admits misrepresenting himself, but not when NBC admits misrepresenting the world? Why isn’t the scandal that NBC’s Tim Russert said, before the Iraq war, ‘‘I’m a journalist, but first, I’m an American. Our country is at war with the terrorists, and as an American, I support the effort wholeheartedly’’?….The belief that war journalism was about fealty, not fact, came to infect every sentence said on air.

As for Brian Williams, Long writes, “What matters isn’t the man but the environment that made him, where news isn’t fact but a superior sort of fiction, a compound of inflated personalities and imagined stories, a mirror to reality TV. That should be the scandal.”

I guess it’s a super irony that Jon Stewart announced last night, just hours after Williams’s suspension was made public, that after seventeen years he’ll be leaving The Daily Show. The timing was probably a coincidence (though Joe Scarborough suspects that Stewart timed it “as a favor” to Williams), but it does give an edge to jokes about why don’t they just switch jobs. Terrence McCoy wrote that “Jon Stewart, now as much a newsman as a comedian, and Brian Williams, now as much a comedian as a newsman” could go out together.

But it’s not really such a wild joke—apparently, Williams asked to fill Jay Leno’s spot when the lantern-jawed stand-up finally retired from The Tonight Show. NBC had to remind the news anchor that he wasn’t actually a comedian.