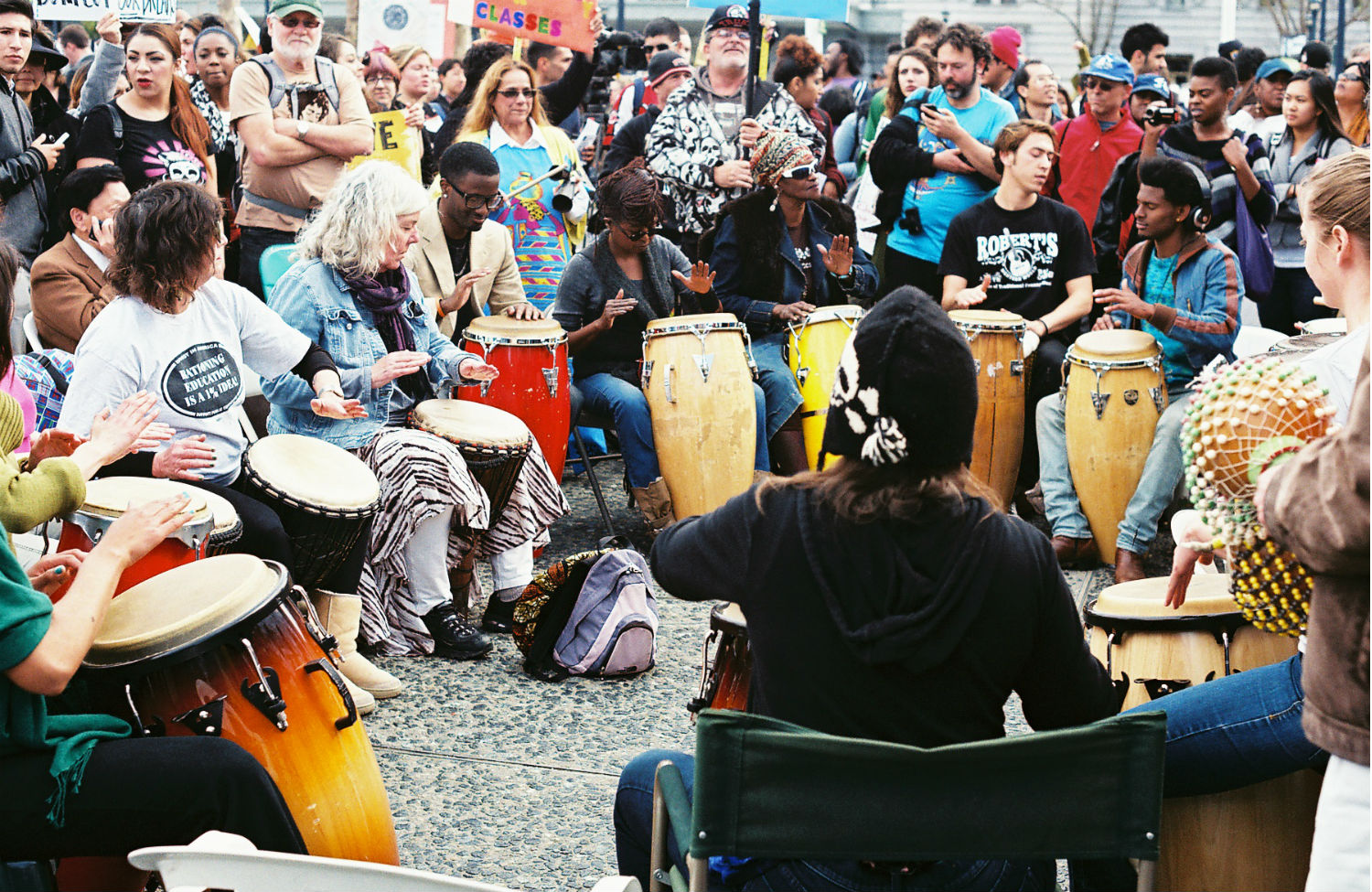 Protesters attend a Save CCSF rally in San Francisco to prevent the Accrediting Commission for Community and Junior Colleges from revoking the City College of San Francisco’s accreditation. (For A Bit More Context/Flickr)

To mark the new year, this week’s theme is emerging organizing. The list is far from exhaustive.

As always, contact studentmovement@thenation.com with any questions, tips or proposals. Edited by James Cersonsky (@cersonsky).

In 2013, students, parents and teachers throughout Colorado protested and petitioned to reverse the tide of education policy. In 2014, we will see new tests and programs that further compromise the value of education. From January 17 to 20, a Colorado Student Power Convergence will assemble in opposition. We plan to create a campaign to boycott all standardized testing. Planning will continue at a follow-up conference in February, the Student Power Continuum, where we will reach out to parents and students to encourage them to boycott the TCAP test and organize actions leading to United Opt Out’s national conference, March 28 to 30, in Denver.

2. In LA, the Undocuqueer Movement Grows

Queer and undocumented immigrant youth have been at the forefront of the immigrant youth movement. Undocuqueers have developed a critical lens of the mainstream LGBTQ movement by shifting its focus from marriage equality to issues affecting LGBTQ immigrants within education, healthcare and the immigration system. Of the 2 million deportations carried out under the Obama administration, many are queer, and many are trans* women placed in detention centers forced to experience physical, sexual and psychological abuse by officials and other detainees. In February, expanding on the work of QUIP, undocuqueer leaders, LGBTQ immigrants, parents and allies in Los Angeles will launch a national LGBTQ immigrant rights organization.

Sun Devils Against Sexual Assault is a group of current and former Arizona State University students, staff and faculty committed to ending sexual violence on and off campus. After losing a major Title IX lawsuit in 2009, ASU made a commitment to protect students from rape culture, but students’ Title IX rights continue to be violated and the ASU administration continues to protect student and faculty predators. In addition to organizing Title IX and Clery Act complaints, SDASA wrote an open letter to ASU President Michael Crow in September and subsequently confronted him about the issue of rape culture in person last month. President Crow, like his colleague Kevin Salcido, Chief of Human Resources, is more concerned with protecting the University and its reputation than with protecting students from sexual harassment and assault. SDASA hopes to add ASU to the growing list of colleges under investigation by the Department of Education for Title IX violations.

Graduate students at Johns Hopkins have organized against a plan that would restructure the university. Changes include reducing graduate student cohort sizes in social sciences and humanities, an emphasis on junior faculty and the centralization of decision-making power with the university administration. This strategic plan was formulated behind closed doors with nominal and selective input from faculty and students. More than 270 graduate students have signed a letter calling for a one-year moratorium on the implementation of the plan. Departmental directors of graduate studies, the academic council and the faculty assembly also called for a moratorium. Graduate students attempted to confront the dean in person about the lack of response to the moratorium, but were met by vice deans and campus security. Like our peers facing similar structural reforms at educational institutions across the country, the graduate students at Johns Hopkins will continue to fight for democratic inclusion in university governance.

In October, student organizers at the City College of San Francisco launched the second Student Labor Action Project chapter in California. As part of Campus Equity Week, CCSF SLAP hosted an End the Student Debt Crisis event with a screening of Default and a panel highlighting the crippling effects of the student loan industry on students and workers. Attendees were briefed on and asked to support a CCSF SLAP campaign to keep CCSF open and fully accredited. As one of the largest community colleges in the nation, CCSF is an affordable pathway to higher education for working-class people. Nonetheless, this past July, it received notice from the Accrediting Commission for Junior and Community Colleges that it wanted to close the institution. A battle has waged on ever since and a judge recently ruled that a private commission cannot revoke the accreditation of CCSF until a trial is held to determine if the action is lawful. But the campaign will continue until CCSF’s future is fully and permanently secured.

After years of statewide cuts, the accumulation of a $5.5 million deficit and the possible threat of academic probation, the Los Angeles Valley College administration cut $606,470 from the college budget on November 8. These cuts included thirty-one already-scheduled classes, part-time faculty, student tutoring services and the entire track and field team—forcing teammates to go all the way to West LA to participate. The most drastic impact was a district-mandated increase in the average class size to thirty-eight students this spring and forty in the fall. On November 26, Students Against Cuts formed to fight against the cuts. The group’s ten demands include a reversal of the cuts, a call for transparent budgeting, a decrease in salary for top administrators, living wages for campus workers, the reduction of textbook prices and an increase in the number of classes.

This spring, students at Rhode Island College are launching the Rhode Island Student Union Project with the goal of establishing a vehicle to fight for our interests and build the power of students across the state. This past semester, the embryonic RISUP tested combative politics by resisting the administration’s attempt to arm campus police. Disrupting the “what-if” narrative triggered by a false-alarm shooting at URI last year, our efforts spurred critical dialogue across the campus and successfully led administrative officials to hold off on what we saw was a very negative policy, at least “at this point in time.”

In the fall, the University of the South in Sewanee, Tennessee, witnessed the birth of its first socialist organization, the Sewanee Young Democratic Socialists. Since then, along with HOLA, which promotes Latino/a cultural awareness, we have cosponsored talks by movement photographer Pocho-one and facilitated workshops to help undocumented students navigate the college application process. We also participated in the inaugural meeting of the Tennessee Student Union Project, which seeks to give students and campus workers across the state a voice against the corporate assault on higher education. Although we press forward in a historically conservative institution and region, we have found no shortage of allies.

The Working Class Student Union was founded by students at the University of Wisconsin–Madison when one student was told that kids like her could only get more financial aid if she got pregnant. The group works to bring social class into diversity discussions, connect working-class and first-generation students with others who share their background and provide ready access to campus resources. This spring, WCSU is working to publish a series of narrative videos from students and staff on campus with working class, low-income and first-generation backgrounds, providing support and validation of student experiences on campus. With this project, we hope to reach students grappling with social class issues as well as develop support services for these students.

This year, the Missouri GSA Network, with the help of the Dignity in Schools Campaign, started organizing around socioeconomic justice, with a focus on student “push-out” and the school-to-prison pipeline. Homophobia and transphobia are among the primary reasons why students are pushed out of the institutions that were meant for them. In St. Louis, several schools have implemented violent and secretive practices that exacerbate youth criminalization. Our socioeconomic committee, GSAs for Justice, hosted a rally to start off the school year and will be marching in St. Louis’s annual MLK day parade. At the end of January, we will further our understanding of the school-to-prison pipeline by visiting BreakOUT! in New Orleans. On March 5, we will have our annual Queer Youth & Ally Day at the capital, which is completely run by student leaders.

The SEIU Millennials chapter in Los Angeles emerged from a conference this fall, with young worker representation from Oregon to Florida. Our work focuses on two questions: First, why are we, as a younger generation of healthcare workers, choosing the healthcare industry? Second, what issues are important to us? I got involved because I want a say in what happens in my union. I cohosted the last conference call of the year for the program in which we organized our first interlocal video conference call, scheduled for January 21. Our goals for 2014 include strengthening political action, supporting Walmart workers and winning greater income for fast-food workers.

In the fall, Arkansas Natural Dreamers targeted Congressman Steve Womack and our ICE office in Fayetteville as part of United We Dream’s thirty days of action. On January 26, AND is organizing an event for Arkansas leaders to dicuss how to improve the atmosphere in the state for the undocumented community. Dreamers will talk about the importance of in-state tuition and the importance of working with our national network, United We Dream. As the movement grows, we will continue working to synchronize our actions nationwide.

In 2014, Roanoke United Families for Immigration Reform will continue pressuring Representative Bob Goodlatte, urging him to move on immigration reform this year, an issue he claims will be a top priority this year. Our organization has come a long way since our first meeting in October 2013. We held twenty days of sustained action outside of Goodlatte’s office with more than 100 people showing up throughout the month and at least thirty participating every night. This spring, we’ll continue working on reform on a national level, while also fighting to make Roanoke a sanctuary city, stopping the detention and deportation of members of our community and fighting for tuition equality and driver’s licenses for all undocumented Virginians.

15. How to Document a Generation?

This spring, two online spaces, Undocumenting.com and Youngist.org, are working together to highlight the multidimensional nature of the millennial identity and to reinforce our ability to tell our own stories. Our projects have grown out of disillusionment with mainstream media’s overwhelming focus on the narratives of millennials—as in Girls or Gossip Girl—and seek to challenge the outsourcing of our stories. Our upcoming collaboration explores the dichotomy of art and journalistic writing created by young people. Future collaborations between our projects have the potential to carve out space for undocu-youth, queer kids, women of color and youth of color to exist beyond that single narrative. In the long term, we envision a mediascape that is rooted in social justice and leaves no pieces of ourselves behind.