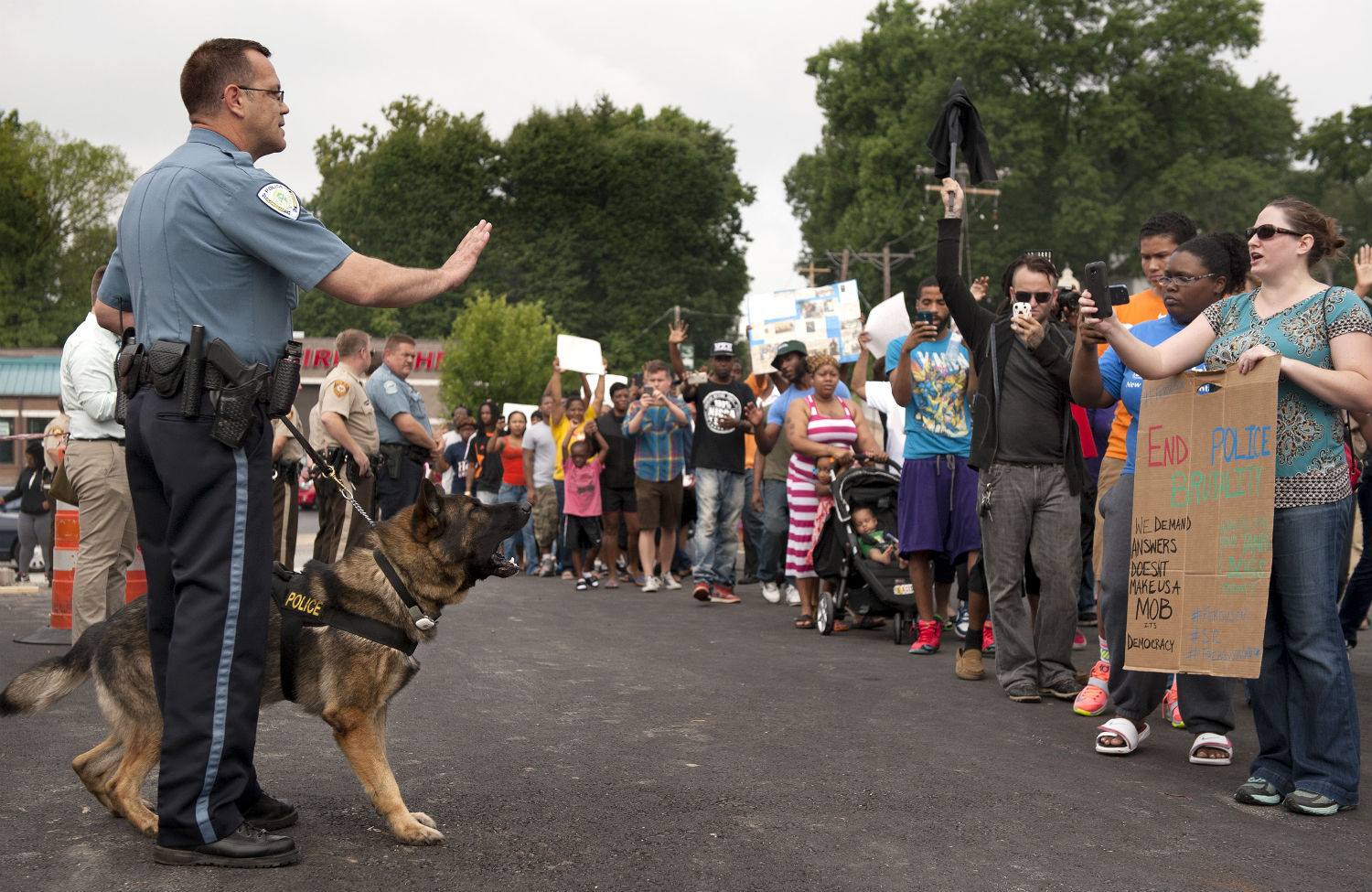 For many Americans, the recent events in Ferguson raised disturbing questions. But not all Americans were equally disturbed, or disturbed by the same things. Surveys and polls conducted since Darren Wilson, a white police officer, shot and killed Michael Brown, an unarmed 18-year-old black man, reveal a stark divide between whites and blacks. Whereas a clear majority of African-Americans consider the conduct of the police outrageous and typical, most white Americans were far more critical of the disorder that followed Brown’s death. Fox News and its ilk dwelled on “looters” rather than on the sources of African-American alienation. Americans seem to be stuck in an endless repetition of 1968, the year that many African-American communities erupted in anger after the murder of Martin Luther King Jr., and many white Americans responded fearfully to that anger and protest by voting for Richard Nixon.

There is another divide over race that gets far less attention (that is to say, virtually none) in the media: between Americans and non-Americans. Americans tend to think about racial matters in this country in terms of civil rights, whereas around the world they are commonly looked at in terms of human rights (and the term “race” is, if possible, avoided). When it comes to the treatment of racial or ethnic groups in other countries, American leaders and policymakers routinely employ the language of human rights. Not so for comparable grievances at home.

The distinction between civil rights and human rights is not semantic. The civil rights movement sees racial discrimination as a domestic concern, to be resolved among Americans. It demands that American society live up to the nation’s creed that “all men are created equal.” But to many critics, mainly from the left, defining the black struggle as a civil rights struggle has kept African-Americans under the political and moral jurisdiction of the United States, where they continually suffer from institutionalized racism. In the past, black leaders and intellectuals such as Malcolm X and James Baldwin insisted that when blacks encountered police brutality (for example) their human (and not just civil) rights were violated. Substituting “human rights” for “civil rights” also meant that the problems facing African-Americans would be a matter of concern for the international community.

Americans horrified by the killings of unarmed African-Americans, the militarization and aggressiveness of overwhelmingly white police in mostly black communities, and the feeble, handwringing responses of elected officials should start thinking of ways to tie the plight of African-Americans in the United States to the universal claim for human rights, because a heightened global interest in racial violence in the United States, viewed through the prism of human rights, might turn out to be the only key to significant progress.

This turn from civil rights to human rights entails the shattering of some powerfully entrenched myths about the African-American condition. It starts at school. Most Americans (and for that matter, people in other countries) are taught a comforting, and incomplete, version of civil rights history. It goes something like this: For several decades after Reconstruction, the American South had a system—Jim Crow—that enforced the segregation and discrimination of African-Americans. Led by inspirational figures such as Rosa Parks and Martin Luther King Jr., and assisted by enlightened whites, blacks fought against Jim Crow and met with harsh resistance from white Southern authorities. Ultimately, however, thanks to the tireless efforts from below, and their own liberal benevolence, national leaders and the federal courts saw the light and promoted civil rights legislation. Since then, the United States has been on a steady forward march, culminating in the election of Barack Obama to the presidency. There are of course occasional unfortunate glitches, reminding us of darker times, but overall this is a story of progress. Given the popularity and appeal of this narrative, designed more than anything to make Americans (white or otherwise) feel good about themselves, it is perhaps not so surprising that many Americans are stunned every time a Ferguson happens—not necessarily by the killing of a black male (that is too common), but by the outburst of anger that follows.

What is missing from this misleading account is the crucial role that America’s foreign policy prerogatives played in promoting change in the Cold War years. The great civil rights struggles of the 1950s and ’60s took place against the backdrop of the fierce propaganda battle between the United States and the Communist bloc (both the Soviets and the Chinese) over how the situation of American blacks would be portrayed. In their efforts to sway peoples in Asia, the Middle East and Africa, the Americans stressed racial progress and civil rights legislation, while the Soviets and Chinese highlighted racial repression, claiming that America was hypocritical in denouncing the lack of democracy in the Communist world while failing to respect the basic rights of its own black citizens.

Images of white police brutalizing black protesters with dogs, clubs and hoses were broadcast worldwide, causing the United States severe diplomatic damage. Historians like Thomas Borstelmann and Mary Dudziak have shown how many of the key political decisions made at the top—including President Dwight Eisenhower’s sending of federal troops to enforce the desegregation of a high school in Little Rock, Arkansas, in 1957, or President Lyndon Johnson’s pushing for the passage of the Civil Rights Act of 1964—were a direct result of these geopolitical concerns. In other words, the threat to America’s interests abroad helped enable the successes of the civil rights movement at home. It was realpolitik even more than morality or enlightenment that brought about social change.

America’s foreign policy challenges are very different today from what they were fifty years ago. But one fundamental dynamic has not changed. The gaining of civil rights is a desultory process, resisted at every opportunity by entrenched forces. It is the result not only of the sacrifice and commitment of minority activists, or the occasional goodwill of leaders and the courts, or moving speeches by the president. Now as then, without the geopolitical factor, there is too little incentive for American leaders and policymakers to actually bring about the sort of changes that would make Michael Brown’s awful death, and its violent aftermath, a thing of the past.

Since the presidency of Jimmy Carter, and certainly since the end of the Cold War, the United States has made human rights a cornerstone of its foreign policy platform. (What it has actually done for human rights as a result of its foreign policy conduct is a separate question, often with unpleasant answers). Members of the foreign policy establishment will have surely taken note, then, of the astounding coverage that Brown’s death and the subsequent events in Ferguson received around the world. Leaders from China to Egypt to Iran to Russia have denounced Brown’s killing and the behavior of the Ferguson police as human rights violations. Readers may be forgiven for seeing these responses with some skepticism, since Egypt, Iran, China and Russia all stand accused, rightly so, of human right violations themselves and have an interest in throwing such criticism right back at their critics. But this is also one early sign that the mistreatment of African-Americans could once again become a liability in America’s foreign affairs. Especially now, as the Obama administration prepares to re-enter the Middle Eastern fray (and thus make sure that Obama’s successor will be facing a new set of unsolvable problems in the region), it would be extremely difficult for the United States to convince anyone of its sincere intentions to promote security, stability, democracy and human rights abroad when it appears unable or unwilling to live up to its own human rights standards at home.

Given ongoing white resistance and the sad realities of America’s current partisan politics, African-American leaders and civil rights activists cannot continue to rely only on change from within. As Malcolm X once urged them to do, they might have to find support among, and make common cause with, the international community—as he put it, “human rights are a precondition for civil rights.” This approach does not guarantee success, but it at least offers hope. History suggests that only when our policymakers and national leaders conclude that the mistreatment of African-Americans is harmful to America’s interests in the world will we see meaningful progress in civil rights here at home. Until then, sadly, we can expect more tragedies such as that of Michael Brown.