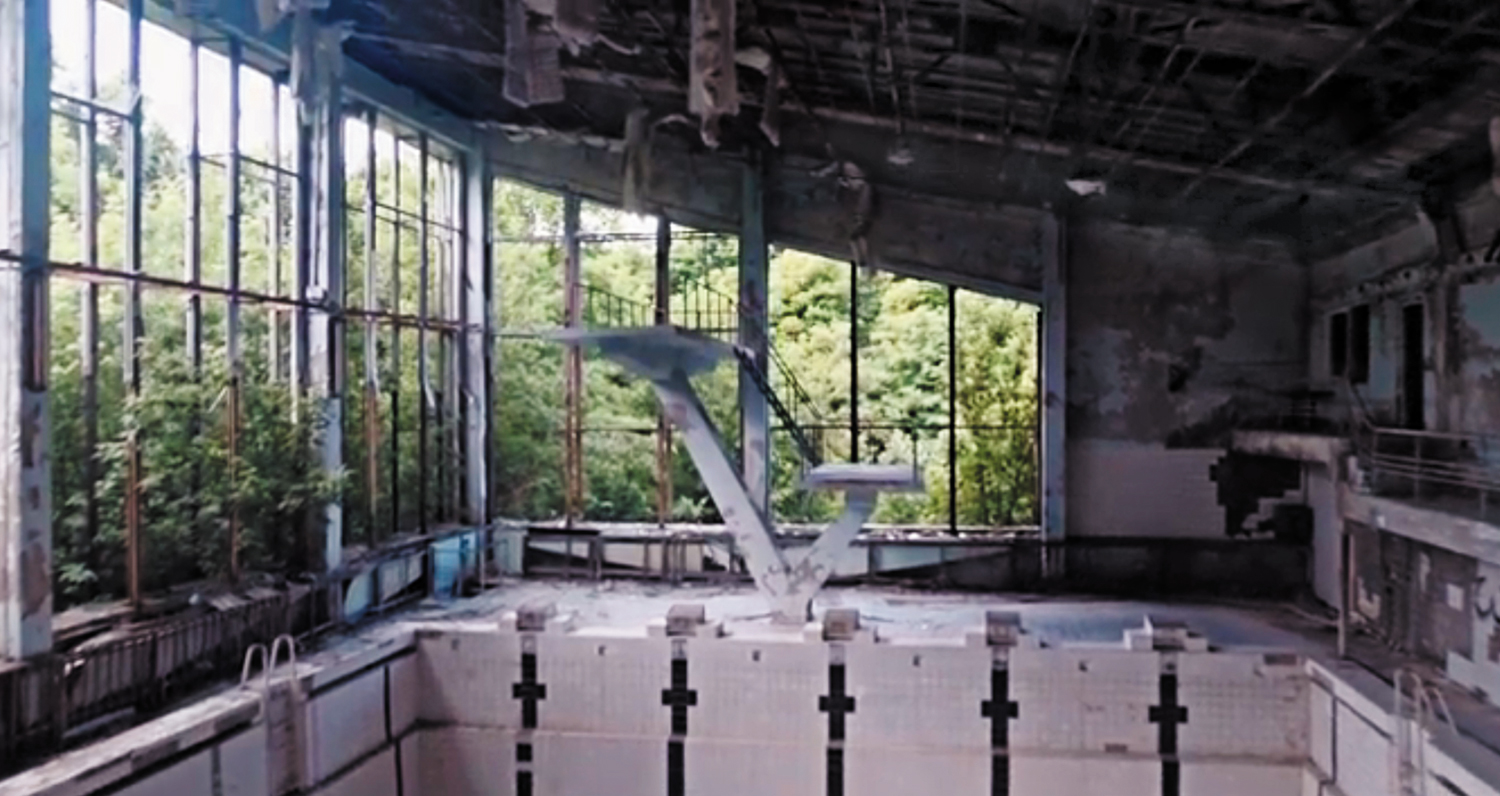 A shot from Postcards From Pripyat, Chernobyl, by Danny Cooke

The drone-mounted camera glides deliberately through the spaces within and above the empty city. The soundtrack is haunting, or “haunting.” We think of drones moving relentlessly forward: into the hidden terrain of surveillance, into the kill zone, into the future. Yet many of the shots point the lens in reverse, effectively pulling back to show first a figure and only then its surroundings. A diving platform with paint peeled away, then the empty pool. A circular emblem, large and sculptural, then the great apartment block on whose roof it sits, visible for miles. Not all shots follow this rule, and not all are taken by drone, but this is the general approach of Danny Cooke’s Postcards From Pripyat, Chernobyl, a three-minute video from last year. It’s quite beautiful.

It was made to accompany Chernobyl: The Catastrophe That Never Ended, a network show about the afterlife of the 1986 nuclear plant meltdown. The report itself feels like a half-concealed return to Cold War intimations: terrible things happened here once, we are reminded; this may still be the case. That the radioactive exclusion zone is once again in Ukraine rather than the Soviet Union only directs us to the current war and rumors of war arriving ambiguously from the East.

But the video clip registers as something more than propaganda. Behind the back of consciousness, so to speak, it summons forth a lost history, but not necessarily the one it seems to propose. This reversal is marked by contradictions, of which the drone flying backward into history is only the first.

The genre of drone videos grows increasingly popular domestically: weddings, sporting events, paparazzo-type stuff. Still, it is a truly international cinema. Drones are instruments of imperial management, promising sterile impersonality but entirely premised on the personal, on the presence of the body and the logic of the target. They want to look at people and maybe kill them.

Postcards is almost entirely lacking in people. Perhaps its genre is the environmental imaginary, school of The World Without Us. That’s not quite right. There is no sense of a return toward a natural equilibrium. Instead, it is fascinated by the made world absent its makers, a postcard home from a homeless place. The whole clip is designed to summon forth a single feeling: the uncanny.

It’s always worth sourcing that feeling to Freud’s unheimlich, unhomely, something at once familiar and alien. Common life, but different. The drone lifts off first in a derelict amusement park; the seat baskets of the Ferris wheel resemble retro pie tins. The past, sort of. It seems to come from an alternate reality whose design developed along a different path. Could this have been our planet? The feral garden atop the Hotel Polissya, one of the tallest buildings in Pripyat, its lingering signage now language for nobody. An absurd mural of a lithe cosmonaut and woman in a pseudo-classical shift, painted doves rising between them. Abandoned children’s dolls, that terrible cliché. A capstone shot of a wide floor vanished beneath elephantine gas masks gathered into a great sinister pool of rubber and metal. This is meant to be the most uncanny of all. But the homes are unhomelier still: the evacuated apartment blocks, dwellings without dwellers, overgrown as the whole city is overgrown with off-kilter and weirdly colored foliage, the drone returning to the building crowned with the emblem. No doubt it is a record of loss, but of what, exactly?

The emblem is the hammer and sickle, you will not be surprised to learn. And yet it is a surprise. If the leading images of the Soviet bloc’s collapse involved the fall of the Wall, the next most common featured the downing of statues, monuments, other such figureheads. The giant hammer and sickle would surely have been dismounted and sent for scrap, but for the nuclear meltdown. Thus the unforeseen consequence of that catastrophe: the built environment was never decommunized. No one can live there, but it remains, an uncanny reminder that the dream of an entirely different way to arrange the most basic things of life once existed. People lived in it, and then they didn’t, but it has not quite been erased. The drone camera cannot stop looking at this fact. This is what the video captures eloquently without ever saying so, without quite knowing it: the saturated and oceanic sense of a world both lost and preserved. There are many catastrophes. Some end suddenly, and some go on.

We should beware of sentimentality regarding such things. The former Soviet bloc has its own cheap affect: ostalgie, nostalgia for the East. At worst it’s a marketing platform, at best a registration that things since 1989 have not turned out so rosily for most residents. The fetishizing of odd Cold War commodities and iconography can’t help but diminish the very thing it plays at celebrating, the other idea of a life in common.

Nonetheless, it seems worth reflecting on that idea, these days. I am not optimistic about the fate of Syriza in Greece, newly elected and purportedly radical, but already retrenching into a largely Keynesian program. Can it be something more than one of the possible management styles for capitalist crisis, and is such a thing even possible in parliamentary channels? The record is not great. But the question has been asked, and is likely to be asked again, possibly in ways other than elections, as the catastrophe of the West rolls onward and we with it, gliding on unforeseen and forgotten currents.