Tablets suspected to be fentanyl are placed on a graph to measure their size at the Drug Enforcement Administration Northeast Regional Laboratory in New York, 2019. (AFP via Getty / Don Emmert)

The Wizard of OxyContin—where is he now? That nickname, revealed in leaked documents, belonged to an employee of Abbott Laboratories, which partnered with Purdue Pharmaceuticals to sell the drug. Starting in the late 1990s, he and his colleagues canvassed clinics around the country, hard-selling doctors on their flagship product. Purdue wooed doctors taught to distrust pain medications with steaks, vacations, and a stunning range of swag: Oxy-branded clocks, pens, beach hats, even swing music compilations. They were told that, unlike other opioids, OxyContin was addiction-proof; its time-release coating assured a steady, measured dose and would thwart attempts at abuse. Unmentioned by those reps—but known by their bosses from day one—was the ease with which this coating could be removed. As doctors began prescribing the drug in ever-larger numbers and Oxy’s sales soared into the billions, this glitch would devastate families, ravage towns, and before long spark the worst drug crisis in US history.

Fentanyl Inc: How Rogue Chemists Are Creating the Deadliest Wave of the Opioid Epidemic

Purdue eventually gestured toward fixing this problem, after 14 years of lucrative dithering. In 2010, a few years before its patent was set to expire, the company prolonged it with a new formula. This revamped Oxy was harder to abuse, and while its effectiveness has been debated, rates of prescription drug abuse have declined, aided by “pill mill” raids and stricter prescribing guidelines. But the wreckage that Oxy left behind is still being felt: In 2017, more than 47,000 Americans have died of opioid overdoses, the highest number on record. That same year, fentanyl became a household name, surfacing in local news segments, policy-website explainers, and thousands of toxicology reports. When the original Oxy vanished from the streets, many of the people addicted to it turned to heroin—and now it emerged that much of the heroin available in the United States (along with fast-rising quantities of cocaine) was laced with fentanyl. The advantage, for dealers, was price: Fentanyl costs less than heroin and is easier to acquire. It also happens to be 50 times more potent.

Often lost in the early news reports was the fact that fentanyl alone wasn’t killing people; many different kinds of fentanyl were. Since its invention in 1959 by the Belgian chemist and doctor Paul Janssen, fentanyl has seen more than 1,400 analogues: twists on the original formula whose origins and effects vary widely. Carfentanil, for instance—100 times stronger than fentanyl—was until 2018 FDA-approved for use as an elephant tranquilizer. It is here that the opioid crisis intersects with (and amplifies) a newer scourge: NPS, or new psychoactive substances, molecularly tweaked stand-ins for traditional street drugs. The best-known of these is probably K2, or Spice, the ostensible marijuana substitute whose high bears little resemblance to the real thing and whose side effects include blood-clotting, kidney failure, and instant death. But there are hundreds more, and likely thousands in development. Mini-pandemics have erupted across the country, as when, in the course of a single week last year, over 100 people in New Haven overdosed on what was later determined to be AB-FUBINACA, yet another synthetic cannabinoid.

Ben Westhoff, in Fentanyl, Inc.: How Rogue Chemists Are Creating the Deadliest Wave of the Opioid Epidemic, charts this progression in harrowing detail. We are now dealing, he writes, with “the harshest drug challenge in our history.” His book is one of the first to address what the Centers for Disease Control has called the “third wave” of the opioid crisis: first OxyContin, then heroin, and now fentanyl and its analogues. Earlier accounts of this crisis—Sam Quinones’s Dreamland: The True Tale of America’s Opiate Epidemic or Beth Macy’s Dopesick: Dealers, Doctors, and the Drug Company That Addicted America—had in Purdue Pharma the benefit, structural and dramatic, of a villain. More or less everyone can agree that pharmaceutical companies should refrain from wantonly pursuing profit at the expense of public health. Dopesick is rarely a pleasant read, but Macy’s account of Purdue’s first major court battle—which culminated in criminal convictions for three executives and $600 million in fines—provided at least some measure of catharsis.

Westhoff, reporting from the flayed, despairing center of this crisis, can’t offer any comparable relief. Purdue Pharma is now dead, and responsibility has devolved, in this third wave, to thousands of loosely affiliated actors: Dark Web distributors, small-time dealers, chemists whose skills and moral scruples vary widely. Like the cryptocurrencies that mask countless NPS transactions, these networks are decentralized: Members taken down are just as quickly replaced. But there is consolation in clarity, and the achievement of Westhoff’s book is to press this sprawling cast and the forces that gave rise to it into something like a coherent narrative, forming legible patterns out of widespread chaos. 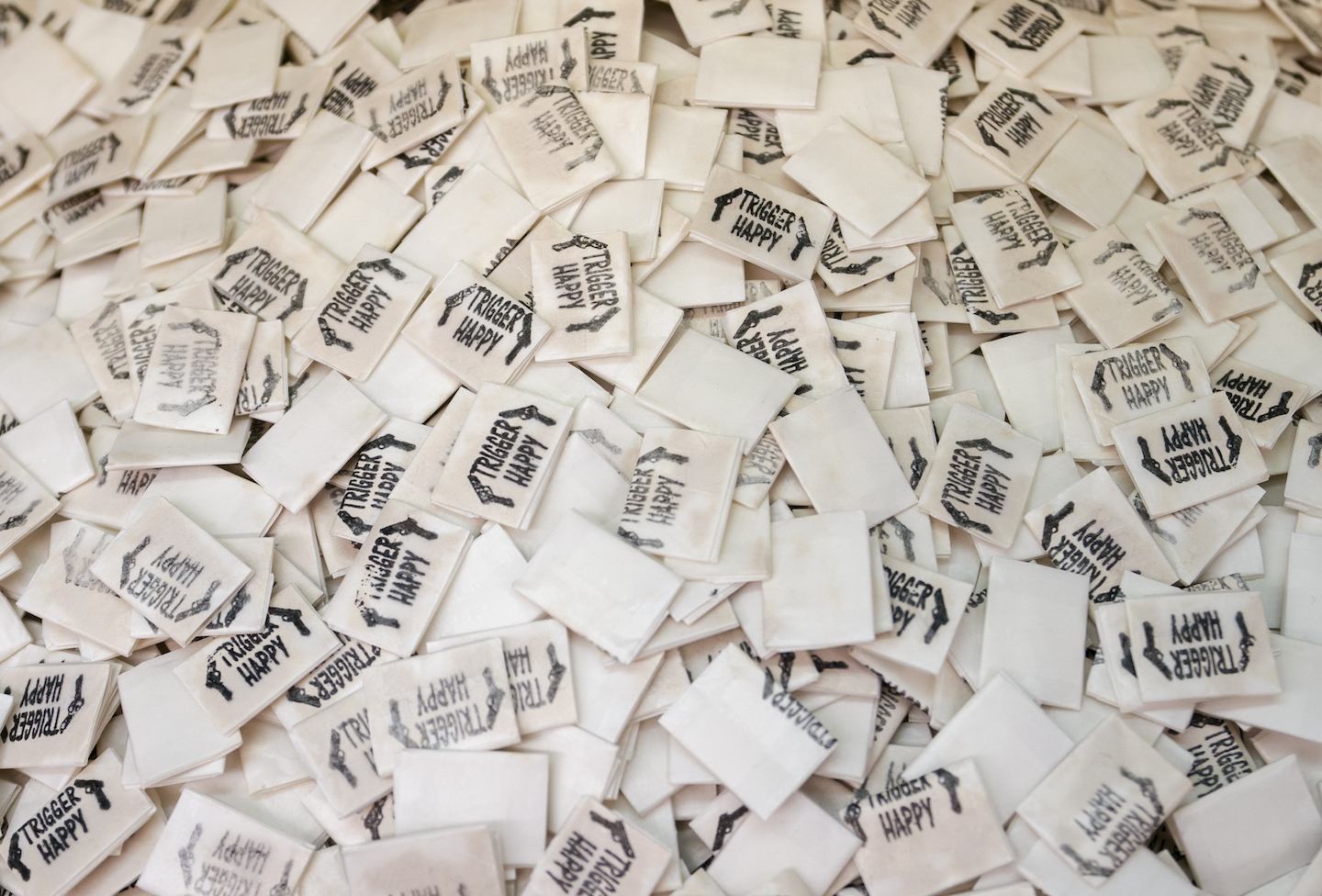 As Westhoff points out, many of the most dangerous NPS were developed under completely legal circumstances, by tenured professors at prestigious universities. These experimental compounds—as well as the steps taken to produce them—were written up in small, peer-reviewed science journals and more or less forgotten, until the underworld began to repurpose these articles as recipes for recreational drugs. David Nichols, the utopian chemist who once dreamed of a drug that would end all war, now finds himself faced with the grief of parents like Eric Brown, whose son Montana overdosed on 251-NBOMe, which was brought into the mainstream through his research.

If Fentanyl, Inc. does have a primary antagonist, it’s the Chinese government. Virtually all of the fentanyls that have flooded the United States in recent years have been manufactured in China, where many NPS are legal, an arrangement that allows legitimate businesses to churn them out on a scale inconceivable to illicit drug makers in North America. This process has been heavily underwritten, as Westhoff demonstrates, by “lucrative tax incentives, subsidies, and direct financial support” from the Chinese government, as part of its breakneck bid to expand the country’s biotechnology sector.

The extent to which Chinese officials are aware of what they’re funding is unclear—some of these companies produce hundreds of products, churning out fentanyls alongside collagen, pesticides, and erectile-dysfunction meds—but the blind eye they’ve turned toward the export of these chemicals has yielded a number of complaints from the United States. The companies, meanwhile, know exactly what they’re doing: Fentanyls and NPS that are legal in China but banned in the US are often shipped in disguise, packaged as dog food or high-gluten wheat flour bread. In addition to an urgent public health crisis, this is an issue of international trade, which means that President Donald Trump seems authentically to care about it. In April, under pressure from his administration, China instituted a blanket ban on the production of all fentanyl variants. The majority of Westhoff’s reporting was conducted before this announcement was made, but, as he argues and as recent developments have borne out, it is “far from clear” if these new regulations have had any impact.

To illuminate this deadly, improbable cycle—in which drugs developed at American universities are mass-produced in Chinese factories and then sold to North American dealers, occasionally winding up, as party drugs, on the very same campuses whose endowments funded their creation—Westhoff ranges widely, logging time with each link in the chain of production. Eventually, in the book’s intrepid centerpiece, he manages to infiltrate two Chinese chemical manufacturers. At one of them, undercover as a cautious buyer, he encounters a roomful of cheerful twentysomethings blithely Skyping with potential customers to organize deals. It’s an uncanny moment: With fentanyl components swapped for cheap razors or custom-made mattresses, this could be any number of US start-ups, right down to the strained cheer and punishing work hours (though with the further difference that all of these people live together, in a motel adjacent to their office). But the book’s most revealing encounter takes place back home, when Westhoff, still posing as a buyer, is asked via Skype by one of these young sales reps why exactly people buy a chemical called NPP. Westhoff explains that it’s used to make fentanyl.

Single-Payer Health Care Is the First Step in the Revolution

“Yes, I know it is a bad [product],” the saleswoman admitted, “but I still sell it, so sometimes I feel guilt. NPP is not forbidden in China, so we can sell. I sell it, because I want to earn money, earn a living.”

Westhoff lets this exchange stand on its own, but a whole world throbs beneath it. Like many Chinese companies, the one this woman works for—called Yuancheng—began exporting its products to the United States only after China joined the World Trade Organization in 2001. That development cost millions of Americans their factory jobs and helped speed along the opioid crisis, as thousands of newly unemployed workers started selling their surplus Oxy to make the rent or maintain their own supply. Asked to justify themselves, they might have said something similar. Neither party—the laid-off factory worker selling Oxy out of his foreclosed home; the Yuancheng saleswoman working six-day weeks to keep the room she shares with six coworkers—can really be blamed. That the latter has progressed to killing the former suggests a failure, or an apotheosis, of two miserably enmeshed systems.

Stemming the flow of drugs from China is important, as is working, somehow, to curb the spread of NPS. But this problem isn’t disappearing soon, and there are people who urgently need our help. The relative whiteness of those affected by the opioid crisis has softened the old approach—jail the dealers, jail the addicts, remind young children that drugs are bad—but as Westhoff demonstrates, we have a long way to go. If we are to treat opioid-use disorder as a disease like any other, then here-and-now treatment must be our first priority, and Fentanyl, Inc. closes with a tour of some organizations taking that imperative seriously. Most of them are located outside the United States, a country whose fervent commitment to prolonged and needless suffering largely precludes the safe-injection sites and drug-testing operations that have saved countless lives in Europe. There have been some signs of progress—Westhoff highlights Grand Forks, North Dakota, a small conservative city that has liberalized access to Narcan, clean needles, and medication-assisted treatment—but harm reduction has yet to take hold as a national strategy. Which is unfortunate, because no other strategy works.