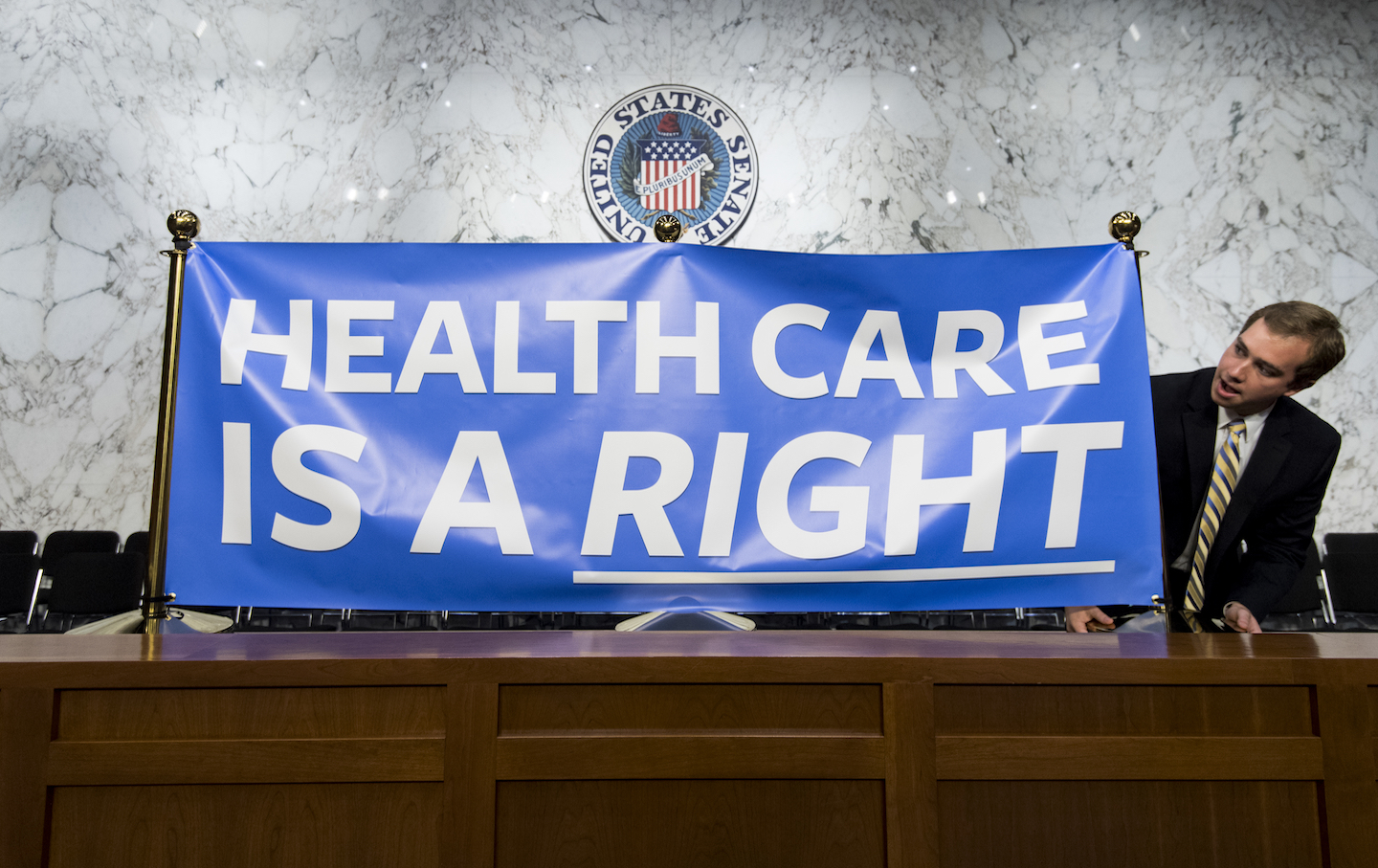 Staffers set up signs for Bernie Sanders’s event to introduce the Medicare for All Act of 2017. (AP / CQ Roll Call / Bill Clark)

Timothy Faust traveled across America giving talks about the “stupid profit-driven multi-player Rube Goldberg machine” that he—among other choice phrases—calls America’s system of health insurance. Faust is an activist for a single-payer system, and for him, insurance doesn’t have to be big and complicated, comprehensible only to policy writers and economists. In his writing, he dispenses with the wonkery and breaks down the single-payer system quite simply.

Health Justice Now: Single Payer and What Comes Next

“Instead of subsidizing a bunch of relatively weak insurers and their fragmented customer bases and risk pools, each of which seeks to mitigate rising health care costs by avoiding taking care of unprofitable sick people, we [should] have one publicly owned, publicly funded insurer with a mandate to cover, in full, all care for all people,” Faust argues. That last bit, “all care for all people,” is the center of gravity in Health Justice Now: Single Payer and What Comes Next, his debut book, about why America needs a single-payer system. Instead of everyone having access to health care, he makes the case that everyone should just, well, have it. For him, anything less is morally unacceptable, and after reading about the desperation he’s seen, it’s hard to come down anywhere else.

On the road, he heard all kinds of wrenching stories, sadly familiar anecdotes about people rationing their insulin and splitting their blood pressure pills in half, stretching them out until their next appointment. Being sick in America is financially and emotionally draining and always seems to be getting more brutal and more expensive. The sicker the insurance industry’s consumers (aka people) become, the harder these companies fight to push costs back onto them. Faust calls this the fundamental law of American health care: Sick people are unprofitable, and companies lose money when a sick person needs a lot of care. “The question of ‘Who gets to receive healthcare, and when?’—or, rather, ‘Whose suffering matters?’—is determined by private profitability,” he writes.

Worse than being sick in America, is being sick and poor in America. Across the country, Faust documented the suffering he witnessed in cities and small towns, but it wasn’t until he landed in Scott County in Indiana that he encountered something that haunted him.

Scott County is a small slice of prairie near the border with Kentucky whose population of about 24,000 is 97 percent white. Having never fully recovered from the 2008 financial crisis, unemployment and poverty plagued the region. Many adults residents had not attained education beyond high school. Unemployment and lack of education are twin indicators of poverty and correlate with poor health outcomes and a lower life expectancy. By the spring of 2015, the health of Scott County was in peril in a brand new way. The county’s rate of new cases of HIV went from roughly five every year to a stunning 200; a full-blown HIV outbreak enveloped this small corner of Indiana.

The outbreak was traced to people sharing syringes used to inject drugs, which the Centers for Disease Control and Prevention described as a “multi-generational activity” in Scott County—meaning that because of a perfect storm of historical and environmental factors like poverty, trauma, and financial hardship, entire families succumbed to addiction.

Of course, there are syringe services programs, which distribute sterile needles to people injecting drugs and have been shown to prevent these kinds of outbreaks. Syringe access programs have been operating in a number of American cities for decades and for many people are a vital public health service. But states with conservative leadership like Indiana tend to ban them, reasoning that making drug use less risky for people encourages users. A statewide ban was in effect before the Scott County outbreak. 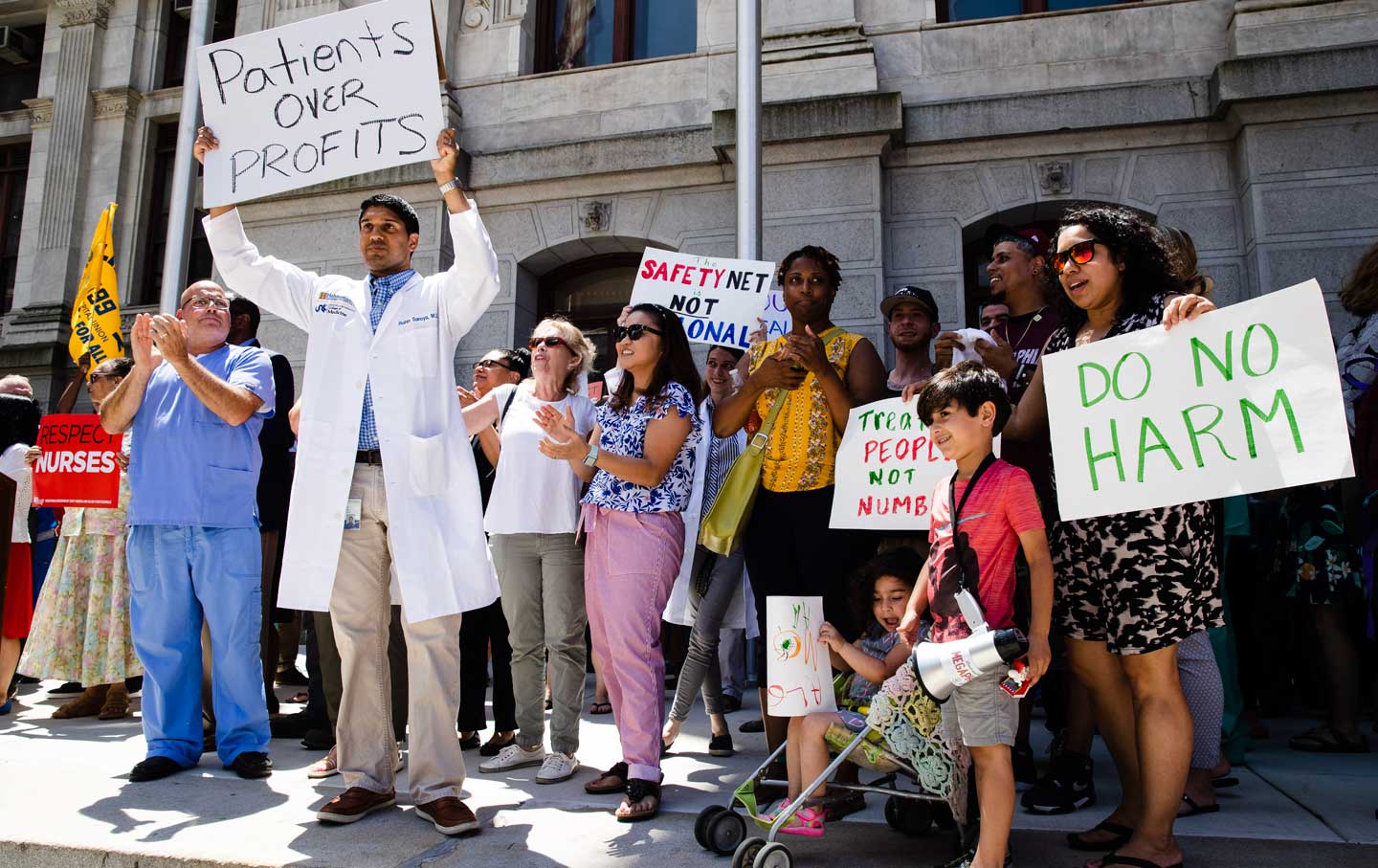 How Medicare for All Would Stop Hospitals Like Hahnemann From Closing

Waffling while the country looked on in shock, then-Governor Mike Pence said he had to pray about whether to lift the ban. Finally, after praying and after public health officials around the country badgered him, he relented. The syringe program quickly contained the outbreak, but the damage was done. To this day, though, possessing a syringe in Indiana without a prescription is a felony.

“But that’s not where the story ends,” Faust writes. “We work hard to dehumanize people battling addiction, to deny them the basic decency of personal agency and context. But they have families; they have communities.” Some families fled Scott County during the epidemic—mostly to avoid having their children go to school with kids living in homes where parents are battling addiction and HIV—taking their tax dollars with them. “You could spot a kid going through hell from a mile away,” a young school system employee in the county told him. There were no services in place to make sure the kids had breakfast or were able to get therapy or even have day care while their parents could get treatment. “And so Scott County schools had an increase in child suicides.”

The poverty, the criminalization and stigmatization of struggling people, the failed conservative policy, and the generational tragedy—all of it illustrated for Faust the cruelty of being sick in America. It’s this scale of suffering and the failure of the system meant to treat it that galvanized him to write a book that spells out in no uncertain terms why America needs a better system.

In Health Justice Now he marshals dozens of similar horrific health calamities that strike impoverished communities to show the uneven distribution of sickness and suffering in America. Aside from demographics, what these 21st century disasters have in common is that they’re all preventable, all unnecessary—an outbreak of hookworm, a parasite that flourishes in humidity and poverty, in Lowndes County, Alabama; housing built on a toxic waste site in the Hunters Point neighborhood of San Francisco that was covered up by a Navy contractor; the infamous water crisis in Flint, Michigan, that exposed young black children to lead.

Such crises showcase America’s uniquely abject health compared with other developed nations’. But America is also an outlier in another way: We pay far more per capita on health care than any other nation. How can a country that spends so much on health care still be so sick?

Health justice—an expanded notion of health care that includes housing, food, the environment, and income—is the conceptual force behind Faust’s argument for a single-payer health care: If children in Flint are exposed to lead, then environmentalism is health care. If educational attainment correlates with better health outcomes, then education is health care. If the moldy walls of the house you live in cause asthma in your child, then housing is health care, and on and on. Health justice is a kind of structural analysis in the tradition of racial, economic, and reproductive justice.

He argues, quite convincingly, that a single-payer system—like the Medicare for All Act of 2019 authored by presidential hopeful Bernie Sanders and cosponsored by other 2020 contenders, including Kamala Harris, Elizabeth Warren, and Cory Booker—would create a more equitable, healthier, and ultimately, more just society. Faust envisions the ways in which a single-payer system can do more than heal people inside hospitals and doctors offices:

I believe beyond any doubt that single-payer is demonstrably sound and eminently feasible. I believe a properly ambitious and well-structured single-payer program will do more than any other American social program of this generation to soothe the burns, to resuscitate the spirit, to nourish the moral will of the American people.

Health Justice Now unfolds in three parts: “What We Got” (an explanation of the current for-profit system) followed by “What We Want,” (an argument for single payer) and ending on “What Lies Beyond” (a vision of a healthier society). The book is part history, part manifesto, and part irreverent tour guide to the barely decipherable landscape of public, private, and private-public Frankensteinian hybrid insurance options. Throughout, he untangles the hidden ideology obscured by the dry lexicon of health care technocrats, showing how their vocabulary of wonkery obscures the stakes: life, death, or bankruptcy for many.

For instance, when Faust unearths the origin of America’s consumer-driven approach to health care in the 1970s, which posits that consumers will be less wasteful economic actors and more responsible shoppers if they have skin in the game and bear some of the costs of their medical bills. “Implicit in all this is the idea that there’s a whole world of people out there who are getting, like, recreational knee replacements,” he writes.

A book like Health Justice Now is perfectly timed for a highly charged political season. Peeling back the euphemistic, focus-grouped language of health policy, Faust helps readers decode insipid talking points, phrases like “universal coverage” and “universal access.” If every Democrat running in 2020 aims to achieve universal coverage or each candidate believes that health care is a human right, then why are there 20 candidates who appear to have diametric policy positions?

“‘Access’ alone is insufficient,” Faust argues. “Just as ‘access to healthcare,’ or, even worse, ‘affordable access,’ does nothing for the person with expensive health problems.” “I technically have unfettered access to purchasing a Ferrari,” he jokes. “But access alone sure as hell ain’t gonna get me behind the wheel.”

He is most compelling when he’s picking apart the prism of profiteering, revealing how entire horizons of meaning are bent and refracted. “We call this whole thing ‘healthcare,’ but that’s not right,” Faust writes. “At some point we confused the corporate transaction of selling insurance with healthcare. We confused the profit motives of companies with the care we need to stay alive. We’ve been led to believe that all of this has to be hard. It doesn’t.” Treating the ailments of the human body can be difficult, but paying for it needn’t be.

“But how can we afford it?” is the question that plagues the politics of moving to single payer. What Faust points out is that America “is already spending the money required to fund single-payer.” America currently pools our taxes to pay for health care. But that money goes to private corporations who in turn refuse to cover people at every step. Government subsidies do not change the fundamental law: Sick people are unprofitable. So the problem is not one of resources but rather how the system chooses to allocate resources. A single-payer system redirects the trillions of dollars already flowing through the market in a smarter way. One study Faust cites shows that Sanders’s Medicare for All bill in the Senate would save the government $5.1 trillion over 10 years. Even researchers backed by Charles and David Koch had to admit that Medicare for All would result in cost savings in the long run.

If America has the money, the infrastructure, and a plan to make all care for all people a reality, then what it comes down to, for Faust, is a wrestling match for power. He argues that right now, a mass movement of people has a chance to structurally create a healthier and happier society with a single-payer system. Otherwise, “It is a murder at the hands of a legion of prissy policy people, a death by a thousand paper clips.” Faust says there are more of you than there are of them.