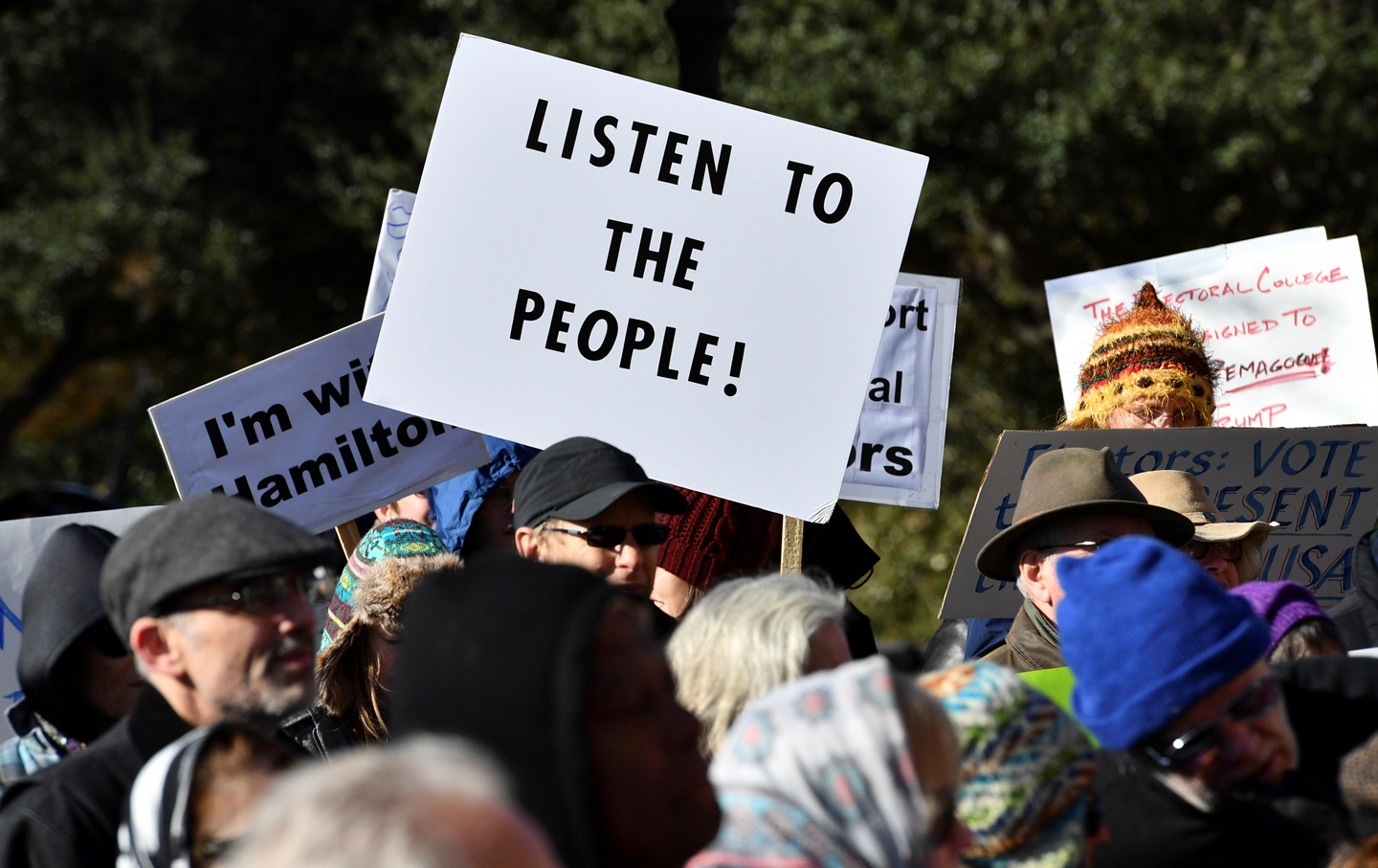 Activists demonstrate against President-elect Donald Trump ahead of the meeting of the Electoral College at the Texas State Capitol in Austin, December 19, 2016. (Reuters / Mohammad Khursheed)

House Speaker Paul Ryan was always going to produce a bad plan for repealing and replacing the Affordable Care Act. Ryan takes his orders from Wall Street, not Main Street, so it came as little surprise that the speaker’s proposal would harm working families and America’s most vulnerable communities, while handing benefits to wealthy individuals and multinational corporations.

But what Ryan came up with is actually worse than anticipated.

There is a good explanation for why Ryan’s crony-capitalist scheme is so dramatically delinked from the realities of the health-care debate and from the needs of the American people. Paul Ryan thinks he can get away with anything.

That may seem weird, as the Wisconsinite leads a House Republican Caucus that lacks majority support. Last November, just 49 percent of voters nationwide backed Republicans for House seats, while 48 percent backed Democrats and the remainder supported independent and third-party contenders. (In 2012, Democrats actually won 1.4 million more votes in House races across the country, yet Republicans retained control of the chamber.)

The key to understanding Ryan’s thinking with regard to health care and every other issue is recognition that the speaker’s authority is not built on popular support. It is built on gerrymandering. Republicans, who gained overwhelming control of statehouses after the wave election of 2010, drew congressional maps across the country that underrepresented Democrats and over-represented the Grand Old Party.

Republicans drew congressional maps across the country that underrepresented Democrats and diminished democracy.

Texas is not the only state where the congressional delegation’s partisan makeup does not begin to reflect statewide voting patterns. But it is a state where, while voting patterns are shifting in the direction of the Democrats, representation patterns have not reflected that shift.

Why? Texas congressional district maps—like congressional and legislative district maps in a number of states across the country—have been gerrymandered by Republican officials who have carved up the state to favor themselves and their party.

Gerrymandering does not just create partisan imbalance, however. It also creates racial imbalance. And that has put the Texas map in the spotlight.

On Friday, the US District Court for the Western District of Texas held that key Texas congressional districts were drawn in a way that undermines minority representation. The three-judge panel that ruled on the case determined that the district lines violate both the Voting Rights Act and the Equal Protection Clause of the US Constitution. “Texas Republicans illegally diluted the voices of Hispanic voters, and this ruling is an important step towards giving all Texans fair representation,” explained Democratic Legislative Campaign Committee Executive Director Jessica Post, after reviewing the decision. “The Texas congressional map engineered by Republican legislators diminished the voices of specific groups of voters just to protect GOP power. This court decision, along with recent rulings in Virginia, Alabama, and Wisconsin, mark important progress in the fight to protect and enfranchise all voters and are blows against the artificial Republican majorities the GOP created at minority voters’ expense.”

Democratic National Committee chair Tom Perez, the former assistant attorney general for the Civil Rights Division of the United States Department of Justice, noted: “The federal court further confirmed what we’ve known all along: Texas intentionally discriminated to disenfranchise Latino and African American voters. This is unacceptable and that is why I led the effort at the Justice Department to challenge these maps.”

This decision is a huge deal for Texas since, as election-law expert Rick Hasen explains, “If this stands at the Supreme Court, it could lead to the creation of more Texas minority opportunity districts.”

The decision is also a huge deal for democracy, as the Texas ruling joins a growing list of federal-court decisions from states across the country that have rejected gerrymandering on constitutional grounds. In Wisconsin, for instance, a three-judge federal-court panel struck down legislative maps as unconstitutional because the maps were so biased that they assaulted the right of citizens to vote in competitive elections. If the Wisconsin ruling is upheld by the US Supreme Court, that could usher in a dramatically fairer and more democratic approach to drawing legislative and congressional district lines nationwide.

For Democrats, that change could be a big part of the road back from electoral oblivion.

“That is why we need a robust program at the DNC that protects all voters and fights back against attempts to limit access to the ballot box,” says the DNC chair, who promises “to be at the forefront of this fight.”

Paul Ryan, who holds his seat thanks to gerrymandering in Wisconsin, won’t approve. But Americans who want sound policy on issues such as health care will. That’s because there is a dawning recognition that gerrymandering is the enemy of responsive and responsible governance.