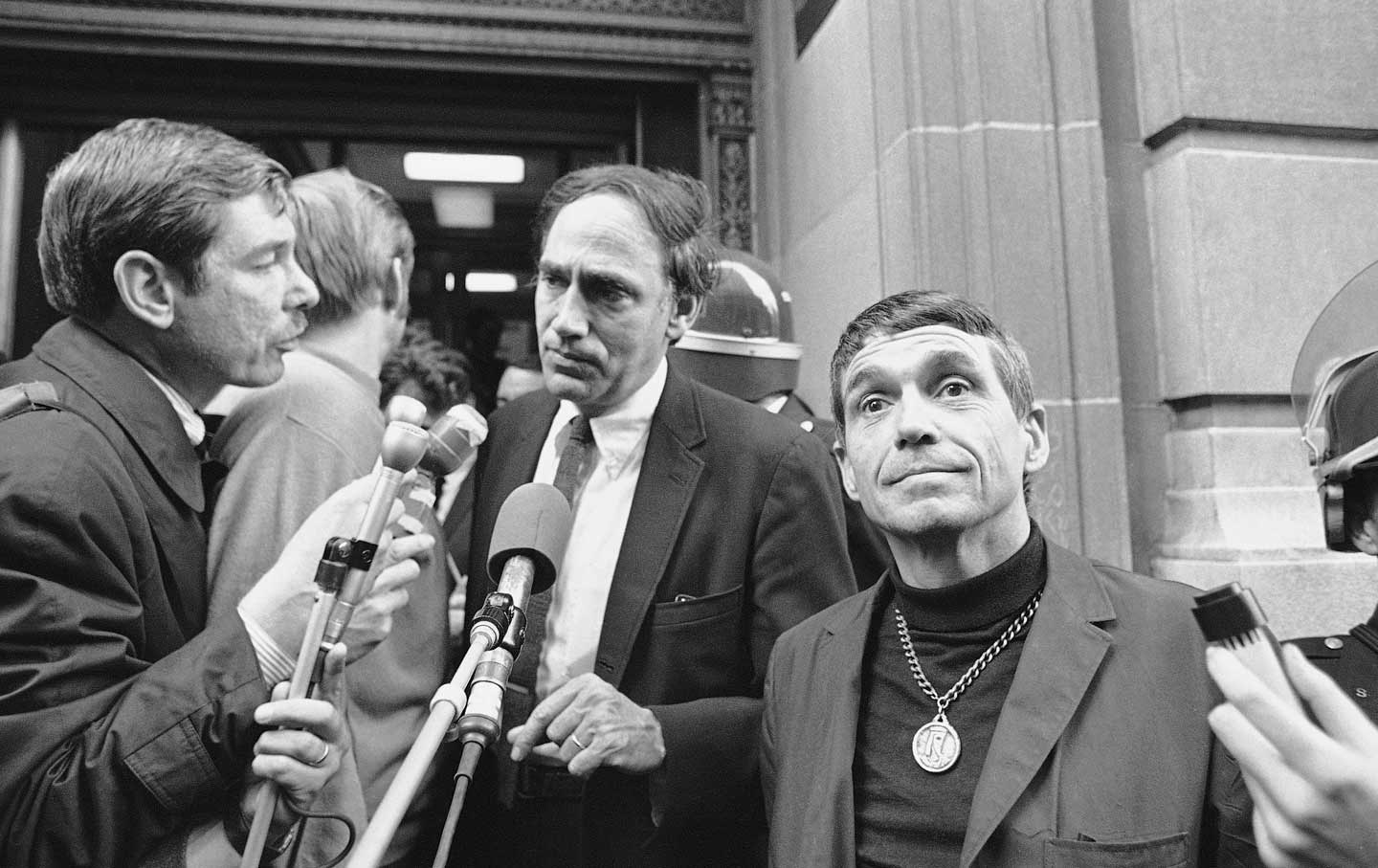 Reverend Daniel Berrigan and lawyer William M. Kunstler in Baltimore, Maryland, on November 9, 1968, after Father Berrigan and eight other Catholics were sentenced to prison. (AP Photo / William A Smith)

Father Daniel Berrigan, who has died at age 94, was a beautiful man with a beautiful vision that he made real by engaging in radical acts of conscience that sought not merely to end wars but to achieve the justice that has always been essential to peacemaking. Born on the Minnesota Iron Range into a family of trade unionists, he and his brother Philip (who died in 2002) brought to the slowly opening national discourse of the 1960s a deep understanding of the linkages between militarism and imperialism abroad and racism and poverty at home. As they came to prominence as fierce opponents of the Vietnam War, the Berrigan brothers taught generations of Americans to identify intersections of injustice and to get clear of them.

Berrigan served 18 months for burning draft records in 1968 as one of the celebrated Catonsville Nine. In his essay on those protests, he wrote: “America fights a stupid and genocidal war in Indochina, mostly because we don’t know how to turn off the bloody spigot we have opened. That is to say, we are powerless to inquire why it is easier to continue to slaughter than to stop it, why the historical cult of violence has become the mainstay of policy—both foreign and domestic, or why our economy so requires warmaking that perpetual war has united with expanding profits as the chief national purpose.”

The book Father Berrigan partially penned during his time in prison, America Is Hard to Find, remains to this day one of the most remarkable statements of this country’s turbulent 1960s and early ’70s. It was, to be sure, an anti–Vietnam War statement. But it was, as well, an expression of a whole vision that speaks as well to our times as it did to the early-1970s moment in which he wrote.

Father Berrigan saw the crisis of his time and ours, warning that “To remain prosperous, America defaces its countryside, fouls its air and water, makes its cities unlivable.” And he pointed a finger of blame at the elites that permitted poverty amid plenty.

“Our institutions and the rule governing them no longer promote the best interests of anyone, including those who keep them stagnant for personal gain,” he explained, as one of the nation’s most prominent Catholic priests. “Churches and synagogues fear the Scriptures, and fear living them; universities undertake war-related research, even as they refuse to lead the young; business puts profit over human life and welfare, while legislatures are filled with those who, for the most part, are vote-getters, rather than critics of war policy and servants of human welfare.”

Father Berrigan was a great thinker and philosopher with regard to power relationships. He outlined a vision for challenging injustice that was rooted in solidarity. And he practiced that solidarity, writing of his own prison experience: “As we face you through these words, a critical question occupies us, a question public enough to occupy you as well. Why are we in jail, and why are there with us, Panthers and Chicanos, draft resisters and draft-file burners, plus poor men who have broken the law as an only way of asserting their right to exist? Because, we would suggest, we acted sanely in an insane society, because we felt the futility of peaceful words without peaceful deeds, because we rejected complicity with a culture and a power structure which idolizes power and privilege, and degrades human life.”

This is where the vital connections were made, not merely between Berrigan and his fellow prisoners but with the great mass of human beings whose lives have been degraded by greed and militarism. It was, Father Berrigan understood—and asked us to understand—a connection that demanded not just the response of words but the response of deeds:

We are in jail, we insist, because we would neither remain silent nor passive before the pathology of naked power, which rules our country and dominates half the world, which shamelessly wastes resources as well as people, which leaves in its wake racism, poverty, foreign exploitation, and war. In face of this we felt, free men cannot remain free and silent, free men cannot confess their powerlessness by doing nothing.

We spoke out, committed civil disobedience, and went to jail because the peace hangs senselessly and precariously upon weapons costing billions to build and billions to improve—weapons which become more useless as we add to their destructive force. With this money we could have fed the world’s people. Half the children on earth go to bed hungry—millions more have retarding and stunting protein deficiencies. Instead of building the peace by attacking injustices like starvation, disease, illiteracy, political and economic servitude, we spend a trillion dollars on war since 1946, until hatred and conflict have become the international preoccupation. Indeed, following our quality of leadership, 70 percent of the nations are either at war, or preparing seriously for war.

That is often portrayed as a radical statement. But it was not so much more radical than former President Dwight Eisenhower’s observation of two decades earlier:

Every gun that is made, every warship launched, every rocket fired signifies, in the final sense, a theft from those who hunger and are not fed, those who are cold and are not clothed. This world in arms is not spending money alone. It is spending the sweat of its laborers, the genius of its scientists, the hopes of its children. The cost of one modern heavy bomber is this: a modern brick school in more than 30 cities. It is two electric power plants, each serving a town of 60,000 population. It is two fine, fully equipped hospitals. It is some fifty miles of concrete pavement. We pay for a single fighter with a half-million bushels of wheat. We pay for a single destroyer with new homes that could have housed more than 8,000 people…. This is not a way of life at all, in any true sense. Under the cloud of threatening war, it is humanity hanging from a cross of iron.

At the root of Father Berrigan’s teaching was a faith in the prospect that great masses of people—and, perhaps, a few of their leaders—might yet be awakened from the slumber of inaction before it was too late. He never stopped preaching a gospel of action that risked arrest in order to challenge militarism and inequality. He kept getting arrested for acts of protest and civil disobedience—in the remarkable Plowshares protests of 1980 at the General Electric missile plant in King of Prussia, Pennsylvania, and as recently as 2006 at the entrance to a naval museum in Manhattan. Even when he was not being arrested, he was standing in solidarity, with AIDS patients, with Palestinian and Jewish advocates for Middle East peace, with the Occupy protesters at Zuccotti Park in 2011.

“Our institutions and the rule governing them no longer promote the best interests of anyone.” —Father Berrigan

While Berrigan could be very critical of the church’s conservative hierarchy, he was inspired by a tradition of Catholic social-justice activism, especially that of the Catholic Worker Movement. In a 2008 Nation interview, he said that its cofounder, Dorothy Day, “taught me more than all the theologians.… She awakened me to connections I had not thought of or been instructed in, the equation of human misery and poverty and warmaking.” From such observations, one can see how much he anticipated the economic-justice message of Pope Francis.

It has been thoughtfully suggested that Father Berrigan’s activism anticipated the economic justice message that has been elevated by Pope Francis. But there was also something older, a faith deeply rooted, that animated Father Berrigan, who wrote decades ago, “What we plead for, what we are attempting to live, is the truth of hope, which asserts that men and women have been made new by Christ, that they can use freedom responsibly, that they can build a world uncursed by war, starvation, and exploitation. Such hope, once created, leads inevitably to nonviolent revolution.”