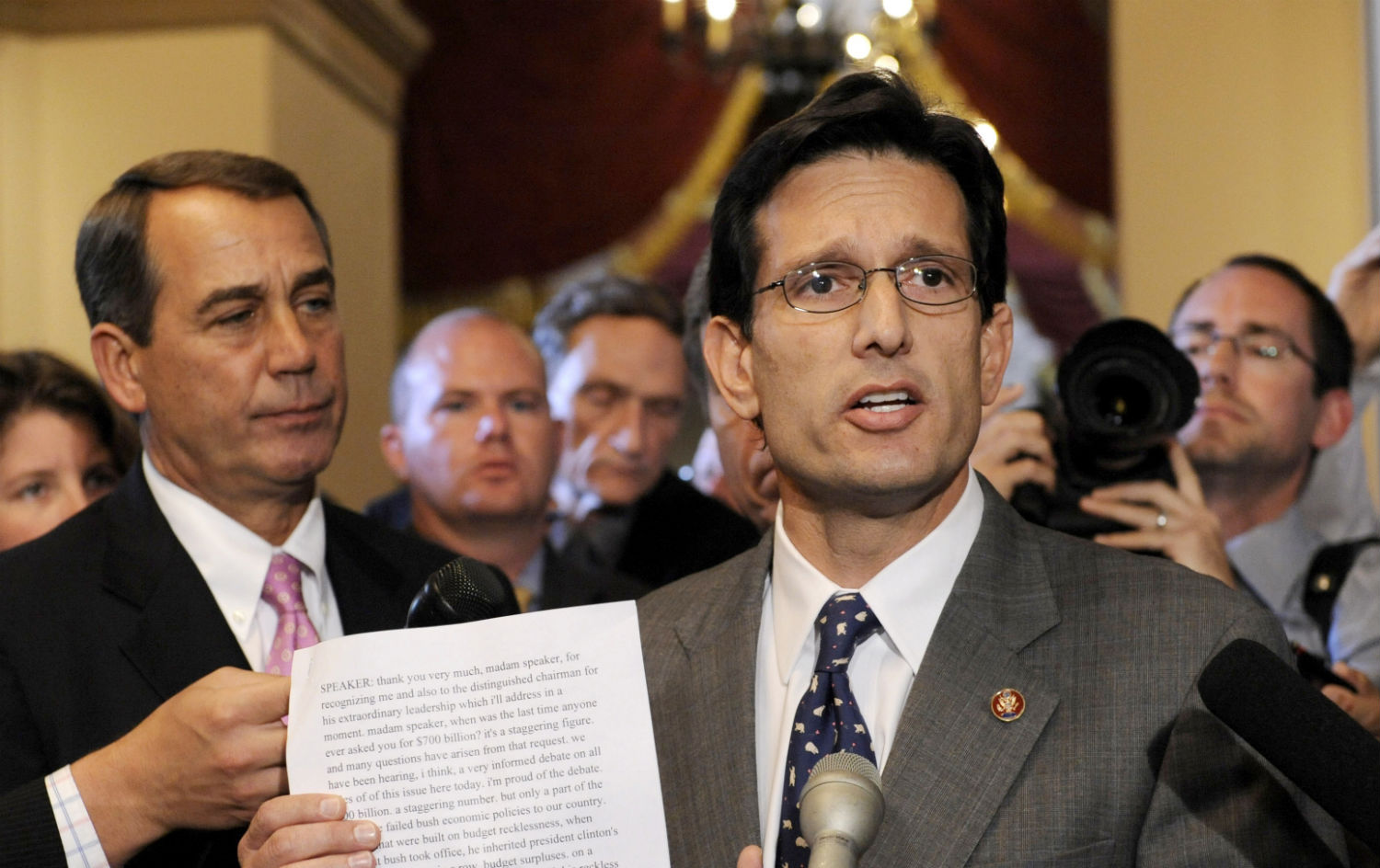 “All of the investment banks, up in New York and DC, they should have gone to jail.”

That isn’t a quote from an Occupy Wall Street protester or Senator Elizabeth Warren. That’s a common campaign slogan repeated by Dave Brat, the Virginia college professor who scored one of the biggest political upsets in over a century by defeating majority leader Eric Cantor in the Republican primary last night.

The national media is buzzing about Brat’s victory, but for all of the wrong reasons.

Did the Tea Party swoop in and help Brat, as many in the Democratic Party are suggesting? Actually, The Wall Street Journal reports no major Tea Party or anti-establishment GOP group spent funds to defeat Cantor. Did Cantor, the only Jewish Republican in Congress, lose because of his religion, as some have suggested? There’s no evidence so far of anti-Semitism during the campaign. Was Cantor caught flatfooted? Nope; Cantor’s campaign spent close to $1 million on the race and several outside advocacy groups, including the National Rifle Association, the National Realtors Association and the American Chemistry Council (a chemical industry lobbying association) came in and poured money into the district to defeat Brat. The New York Times claims that Brat focused his campaign primarily on immigration reform. Brat certainly made immigration a visible topic in his race, but Republic Report listened to several hours of Brat stump speeches and radio appearances, and that issue came up far than less what Brat called the main problem in government: corruption and cronyism.

Brat told Internet radio host Flint Engelman that the “number- one plank” in his campaign is “free markets.” Brat went on to explain, “Eric Cantor and the Republican leadership do not know what a free market is at all, and the clearest evidence of that is the financial crisis … When I say free markets, I mean no favoritism to K Street lobbyists.” Banks like Goldman Sachs were not fined for their role in the financial crisis—rather, they were rewarded with bailouts, Brat has said.

Brat, who has identified with maverick GOP lawmakers like Representative Justin Amash of Michigan, spent much of the campaign slamming both parties for being in the pocket of “Wall Street crooks” and DC insiders. The folks who caused the financial crisis, Brat says, “went onto Obama’s rolodex, the Republican leadership, Eric’s rolodex.”

During several campaign appearances, Brat says what upset him the most about Cantor was his role in gutting the last attempt at congressional ethics reform. “If you want to find out the smoking gun in this campaign,” Brat told Engelman, “just go Google and type the STOCK Act and CNN and Eric Cantor.” (On Twitter, Brat has praised the conservative author Peter Schweizer, whose work on congressional corruption forced lawmakers into action on the STOCK Act.)

The STOCK Act, a bill to crack down on insider trading, was significantly watered down by Cantor in early 2012. The lawmaker took out provisions that would have forced Wall Street “political intelligence” firms to register as traditional lobbyists would, and removed a section of the bill to empower prosecutors to go after public officials who illegally trade on insider knowledge. And Brat may be right to charge that Cantor’s moves on the STOCK Act were motivated by self-interest. Cantor played a leading role in blocking legislation to fix the foreclosure crisis while his wife and his stock portfolio were deeply invested in mortgage banks.

Most self-described Tea Party Republicans, including Rand Paul and Ted Cruz, have railed against Washington in a general sense without calling out the powerful—often Republican-leaning—groups that wield the most power.

“Eric is running on Chamber of Commerce and Business Roundtable principles,” Brat told a town hall audience, later clarifying that he meant the US Chamber of Commerce, the largest lobbying trade group in the country. He also called out the American Chemistry Council for funding ads in his race with Cantor, telling a radio host that his opponent had asked his “crony capitalist friends to run more ads.” Brat repeats his mantra: “I’m not against business. I’m against big business in bed with big government.”

Indeed, Cantor has been a close ally to top lobbyists and the financial industry. “Many lobbyists on K Street whose clients include major financial institutions consider Cantor a go-to member in leadership on policy debates, including overhauling the mortgage finance market, extending the government backstop for terrorism insurance, how Wall Street should be taxed and flood insurance,” noted Politico following Cantor’s loss last night. In 2011, Cantor was caught on video promising a group of commodity speculators that he would roll back regulations on their industry.

There are many lessons to be learned from the Cantor-Brat race. For one, it’s worth reflecting on the fact that not only did Cantor easily out raise and outspend Brat by over $5 million to around $200,000 in campaign funds, but burned through a significant amount on lavish travel and entertainment instead of election advocacy. Federal Election Commission records show Cantor’s PAC spent at least $168,637 on steakhouses, $116,668 on luxury hotels (including a $17,903 charge to the Beverly Hills Hotel & Bungalows) and nearly a quarter-million on airfare (with about $140,000 in chartered flights)—just in the last year and a half!

But on the policy issues and political ramifications of this race, it’s not easy to box Brat into a neat caricature of an anti-immigration zealot or Tea Party demagogue, or, in Time’s hasty reporting, a “shopworn conservative boilerplate.” If Brat ascends to Congress, which is quite likely given the Republican-leaning district that he’ll run in as the GOP nominee, he may actually continue taking on powerful elites in Washington.