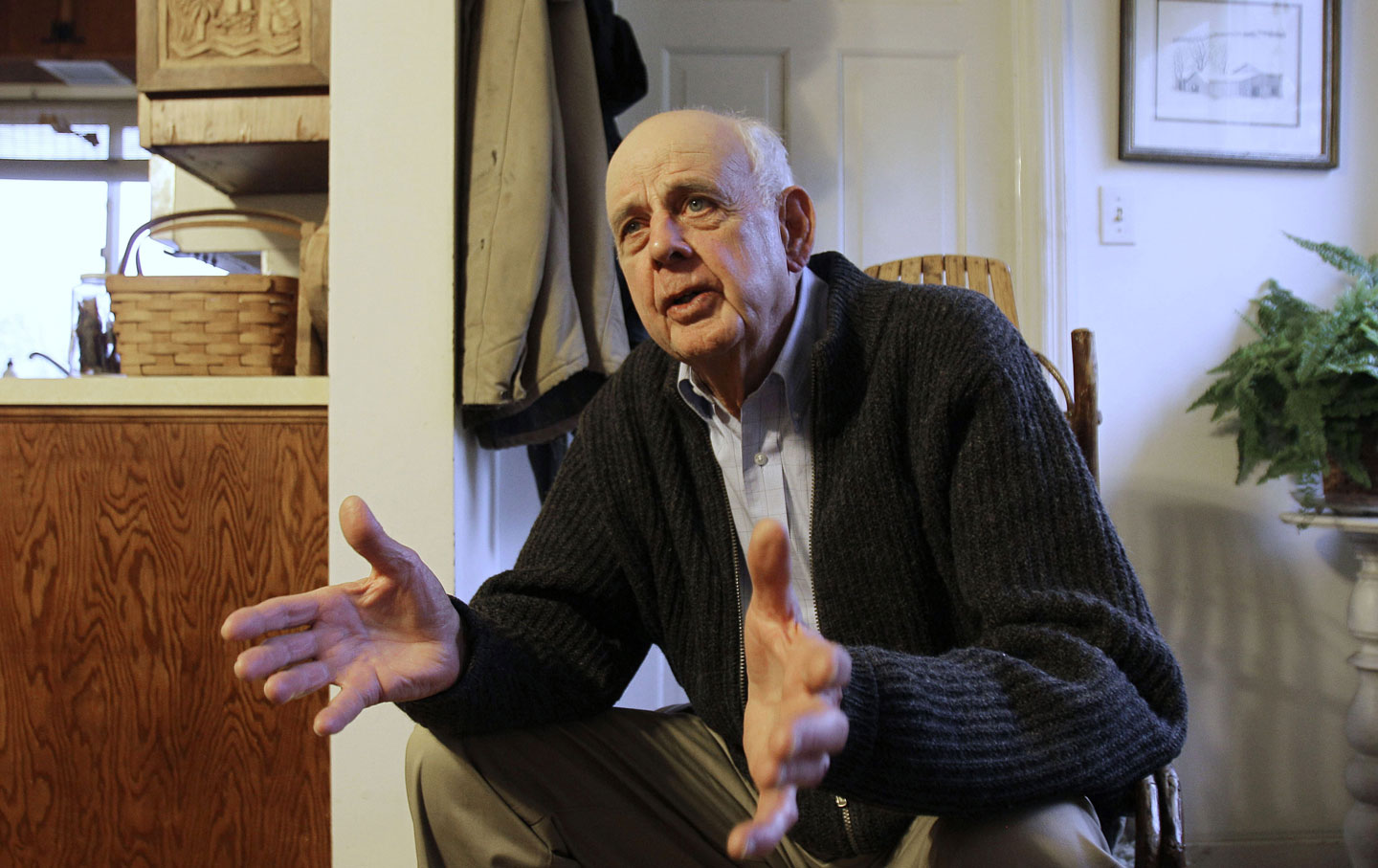 Wendell Berry talking to a reporter after he was awarded the Dayton Literary Peace Prize in 2011. (AP Photo/Ed Reinke)

The Landscaping of Hell

At Frankfort, Ky., last August and October, there was a hearing on three new strip-mine regulations. These were later adopted and put into effect, and now even stricter measures are pending. And so there begins to be some evidence that the state government has at last undertaken a serious interest in one of the state’s most urgent problems. But since they face a powerful and determined opposition, supporters might do well to consider the attitude and the morality displayed by the mining companies at the hearings.

The mining companies have made it clear that they will destroy anything, they will stop at nothing, so long as the result can be inked in black on their accounting sheets. They have been abetted by the mischief and greed of local officials, by public indifference, by state paralysis, by federal cross-purposes and confusion. Against them there has been only a local organization of small landowners.

If there is to remain any hope at all for the region, strip mining will have to be stopped. Otherwise, all the federal dollars devoted to the region’s poor will have the same effect as rain pouring on an uprooted plant. To recover good hope and economic health the people need to have their land whole under their feet. And much of their land has already been destroyed.

To destroy a forest or an ecology or a species is an act of greater seriousness than we have yet grasped, and it is perhaps of graver consequence. But these destructions will mend. The forest will grow back, the natural balances will be restored, the ecological gap left by the destroyed species will be filled by another species. But to destroy the earth itself is to destroy all the possibilities of the earth, among them the possibility of recovery. The land destroyed by strip mining is destroyed forever; it will never again be what it was, it will never be what it would have become if let alone. Such destruction makes man a parasite upon the source of his life; it implicates him in the death of the earth, the destruction of his meanings. Those men who send the bulldozer blades into the mountainsides bear the awesome burden of responsibility for an act that no one can fully comprehend, much less justify.

And though violence to the earth must seem in the long view to be the gravest of their offenses, one is no less troubled by their violence to justice. For do not all our rights have as their ultimate expression and meaning the right of a man to be secure in his own home? When this right is no longer defended by any power greater than himself, his days begin to come to him by accident, in default of whatever caprice of power may next require his life. When the possessions and households of citizens are no longer honored by the acts, as well as the principles, of their government, then the concentration camp ceases to be one of the possibilities of human nature and becomes one of its likelihoods.

Wendell Berry is a poet, activist and farmer whose writings—including the poem “November 26, 1963,” after the death of President John F. Kennedy—have appeared in The Nation for decades.

Land, Community, Justice: The Gospel According to Wendell Berry

The scene is a hearing room in Frankfort, Kentucky. The topic is strip-mining. And the observer is Wendell Berry.

“There was in the statements and questions of the coal company attorneys,” Berry writes, “and in the testimony of the operators, the unmistakable implication that anything can be justified by profit; that a man may own the land in the same sense in which he would own a piece of furniture or a suit of clothes, it is his to exploit, misuse or destroy altogether should he decide that to do so would be economically feasible. The question of the morality of any practice, for these men, has been completely replaced by the question of its profitability.”

Those words appeared in the January 24, 1966, issue of The Nation, in an essay titled “The Landscaping of Hell.” Berry goes on to describe hardscrabble mountain homes and farms destroyed by mine “spoil”—lives recklessly, viciously disregarded. And as we know, the destruction of Appalachia never ceased. Berry’s essay could have been written yesterday.

Wendell Berry, going strong at 80, is many things: a poet, a novelist, an essayist, an agrarian, a family man, a small farmer on the banks of the Kentucky River, a member of his rural community. And he’s an activist—perhaps even an environmentalist, though he transcends any narrow idea of what that word may mean. Like Henry David Thoreau, who was as much an abolitionist as a naturalist, Berry is most deeply concerned with how to live in relation not just to nature, but to nature and one’s fellow human beings—one’s community, in every sense, human and wild—because the two cannot be separated.

But there’s something else that must be said about Berry: he’s a serious Christian, or, as he’s put it, “a person who takes the Gospel seriously.” He’s also a forthright critic of Christianity’s—or, really, Christians’—complicity in our environmental crises. “The certified Christian seems just as likely as anyone else to join the military-industrial conspiracy to murder Creation,” he wrote in “Christianity and the Survival of Creation,” his 1992 lecture at the Southern Baptist Theological Seminary in Louisville. In that same lecture, however, he explained that he cannot simply dismiss Christianity, despite the “catastrophic discrepancies” he sees between the Bible’s teachings and “allegedly respectable Christian behavior.” Instead, for those like himself, “a better possibility is that this, our native religion, should survive and renew itself so that it may become as largely and truly instructive as we need it to be.”

That possibility is, if anything, more urgent today than it was in 1966, when Berry wrote prophetically in The Nation of “strip-mine morality.” To understand what he means, it’s helpful to revisit another of Berry’s prophetic essays, “The Gift of Good Land,” published in his 1981 volume by that title. There, he sets out to make “a Biblical argument for ecological and agricultural responsibility,” and in the process develops a scriptural and moral connection between land, community and justice.

The “good land” to which Berry refers is none other than the Promised Land of the Old Testament: “a divine gift to a fallen people.” While condemning the “ferocity” and “genocidal intent” of the biblical conquest of Canaan, Berry wants us to see that it is accompanied in the Scripture, paradoxically, by an ethical system that is antithetical to the “greed and violence” of the conquest itself.

That ethical system, a “vein of light” in a “rapacious” human darkness, “originates in the idea of the land as a gift—not a free or a deserved gift, but a gift given upon certain rigorous conditions.” What the people are given, he argues, “is not ownership, but a sort of tenancy.” Not only that, but “they must be neighborly,” he adds. “They must be just, kind to one another, generous to strangers, honest in trading.”

These are “social virtues,” Berry notes, but they have ecological significance as well. The land, he explains, “is described as an ’inheritance’; the community is understood to exist not just in space, but also in time.” In other words, one’s neighbors are not only those living next door, but also “the dead who have bequeathed the land to the living” as well as, crucially, “the unborn to whom the living will in turn bequeath it.” And because we have “no direct behavioral connection” to people who are not yet alive, he writes, “The only neighborly thing we can do for them is to preserve their inheritance.”

What Berry is pointing to here is a deep ethical source, a kind of spiritual wellspring of environmental, social and intergenerational justice. “It is a contradiction,” he writes, “to love your neighbor and despise the great inheritance on which his life depends.” He goes on, turning to address those members of his own faith who have broken the covenant: “If ’the earth is the Lord’s’ and we are His stewards, then obviously some livelihoods are ’right’ and some are not. Is there, for instance, any such thing as a Christian strip mine?… Is there not, in Christian ethics, an implied requirement of practical separation from a destructive or wasteful economy?”

It is impossible to “live harmlessly,” Berry acknowledges in “The Gift of Good Land.” But when we “ignorantly, greedily” destroy our inheritance, which is also that of our children and future generations, it is not just a sin; it is a desecration. “In such desecration,” he concludes, “we condemn ourselves to spiritual and moral loneliness, and others to want.”

“Corporate industrialism,” Berry writes in his 2012 Jefferson Lecture for the National Endowment for the Humanities, “has failed to sustain the health and stability of human society. Among its characteristic signs are destroyed communities, neighborhoods, families, small businesses, and small farms. It has failed just as conspicuously and more dangerously to conserve the wealth and health of nature.” In the end, he says, “land and people have suffered together, as invariably they must.” And yet, he concludes, none of this was necessary or inevitable. There has always been, in 1966 as now, a choice. “We do not have to live,” Berry tells us, “as if we are alone.”

What the coal—and oil and gas—companies are engaged in today is a kind of planetary strip-mining, the atmosphere choked with carbon spoil. And those living downslope are our own children and countless innocents everywhere—those alive now and those yet to be born. To live now as if one is alone—and as if profit is the only commandment—is to condemn every member of the human community to an irreparable world and an irremediable want.