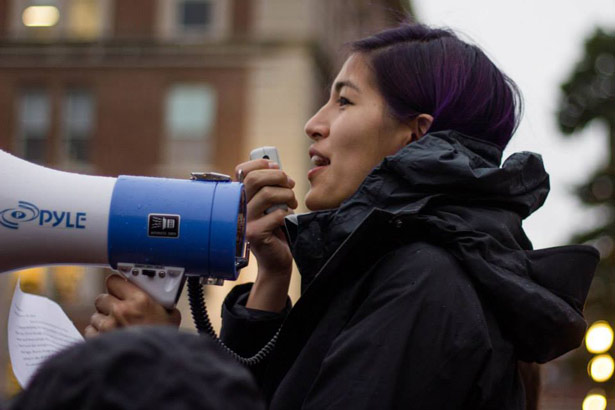 I have to admit, there have been moments when I have doubted Emma Sulkowicz’s story about being raped by her Columbia classmate Paul Nungesser. Not at first—she seemed perfectly credible to me when I spoke to her last year, for a Nation story about campus sexual assault. But then, in December, Ariel Kaminer’s New York Times article about Nungesser came out. “He has gotten used to former friends crossing the street to avoid him,” Kaminer wrote. “He has even gotten used to being denounced as a rapist on fliers and in a rally in the university’s quadrangle.” I couldn’t help but imagine how horrifying it would be to face such ostracization if you were innocent, and to wonder if he possibly could be.

A few months after Kaminer’s story, Cathy Young published a piece in the Daily Beast quoting friendly Facebook messages that Sulkowicz sent to Nungesser just days after the alleged assault. I know that rape victims can behave in ways that, from the outside, seem strange and counterintuitive. I know that they can try to appease their attackers, and that it can take a while for those raped by intimates to admit to themselves what happened. Yet those messages seemed so insouciant and confident. When Rolling Stone’s “A Rape on Campus” came out, about the sexual brutalization of a University of Virginia student named Jackie, I’d felt a flicker of skepticism. If frat boys were really going to lure a young women into a premeditated gang rape as some sort of initiation, wouldn’t they do it somewhere secluded, not at a crowded party? Then I’d suppressed it, worrying that perhaps I was in denial about the true scope of rape culture.

When that story was discredited, one lesson seemed to be not to put aside doubt for political reasons. Perhaps, it occurred to me, much as I wanted to believe Sulkowicz, I should heed the unease I’d felt reading about Nungesser. I didn’t think Sulkowicz was a liar. I wondered, though, if over time she had transformed an ambiguous sexual encounter into something more definitively horrific.

Now that another woman has come forward to write about her alleged assault by Nungesser, I look back on my own thought process and see how doubt can be as reflexive as credulity. I see how easy it is for victims’ stories to be undermined, how simple it is to make a woman—any woman—seem a little bit crazy and prone to exaggeration. The piece, published in Jezebel in response to posters plastered around Columbia calling Sulkowicz a “Pretty Little Liar,” sheds new light on the case and shows how successful Nungesser has been at creating a counter-narrative to Sulkowicz’s. “Every time I read another version of this narrative—that Nungesser merely ‘picked the wrong friends,’ that the complaints against him were a calculated vendetta—my stomach flopped,” writes the anonymous author. “Don’t forget: before he appealed away the conviction, Paul Nungesser was found responsible for sexually assaulting a woman at Columbia. And I’m writing this because that woman was me.”

Of course, we already knew there had been other accusations: Nungesser has faced repeated investigations and disciplinary hearings, though he’s ultimately always escaped any finding of guilt. An ex-girlfriend accused him of “intimate partner violence,” including non-consensual sex, but the university dropped the case against him after she stopped answering e-mails. The author of the Jezebel piece says Nungesser followed her into a room at a party, closed the door behind them, and grabbed her, refusing to listen to her protestations; she ultimately pushed him off her and rushed out. She brought a complaint, which was initially successful; after a hearing, he was put on disciplinary probation. But he appealed, and when she declined to participate further, the judgment was overturned. Then, just last month, Nungesser faced yet another tribunal for sexually assaulting a male victim known pseudonymously as Adam, who lived in his dorm. Again, Nungesser was vindicated.

Viewed from one angle, of course, the multiple accusations confirm one another. But for Nungesser’s defenders, the fact that he was repeatedly cleared, even under evidentiary standards far more lax than those in a court of law, suggests that he was the victim of collusion by students who wanted to see him punished one way or another. The fact that two accusers ultimately declined to follow through strengthens this story.

Young, one of Nungesser’s most dogged media allies, describes the scenario this way in a recent Reason piece: “If Nungesser is innocent, it is entirely plausible that Sulkowicz and [his ex-girlfriend], who met at a party and discussed their history with him shortly before they filed charges, may have genuinely goaded each other into the conviction that he abused them…. It is also entirely plausible that [the Jezebel writer] and Adam either reinterpreted their past encounters with him, or even fabricated stories in the sincere belief that they were helping eject a rapist from the house and supporting his victims. The problem is…a campus culture that fetishizes trauma and turns ‘survivorship’ into a cult.”

The Jezebel author, however, doesn’t sound like a cult member. She sounds like someone who values her privacy and scrupulously followed the rules when she decided to press forward with her charges. “When I filed the complaint against Paul, I didn’t know it would turn into a national event. It was over a year before Emma started carrying that weight, months before what happened at Columbia helped sparked a national dialogue about rape on college campus,” she writes. “I was just trying to do the right thing.”

She explains how even after going through a “horrible and draining” trial, she was initially willing to fight it again when Nungesser appealed, despite having graduated and just started her first full-time job. “I tried to follow through with the process, until I started feeling frustrated beyond belief with Columbia’s incompetence: they kept doing things like calling me in the middle of the day at work to talk about a sexual assault,” she writes. “Eventually, I withdrew from the process. Why should I trust a system that had given my assailant another chance? Without any of my previous testimony allowed to be used at the trial, he won. I wasn’t surprised.” Since then, she’s tried to avoid publicity, to “decline interviews and stay small and quiet,” she writes.

It is sad that she realizes that having been “small and quiet” will bolster her credibility. But she is right. Sexual-assault victims are in a double bind. If they try to remain anonymous and put the incident behind them, their attackers escape with impunity. If they demand that the world recognize what happened, they’re tarred as liars, drama queens, or hysterics. There will be something in their past, something in their behavior that can be used to call whatever they say into question. The inevitable vagaries of real life, the way it always resists conforming to pat dramatic convention, will be used against them.

“If you’re reading this and doubting Emma—if you’re reading this and doubting me—please ask yourself why I’m taking the time to write this,” writes the Jezebel author. “Ask yourself why I filed a complaint against someone I had considered a friendly acquaintance (before my assault). Ask yourself why four unrelated people have taken the time and energy to come forward and file complaints against him. Read Jon Krakauer’s Missoula. Get outside what happened on Columbia’s campus. Try to realize that our stories are everywhere, on every campus, and we’re not all activists like Emma or unreliable sources like Jackie. Some of us are quiet about our stories even if we’re completely sure.”

Absent physical evidence, the rest of us can’t be completely sure of anything. But for me, at least, it’s sobering to see, even in myself, who gets the benefit of the doubt, and what I should expect if I should ever need it.