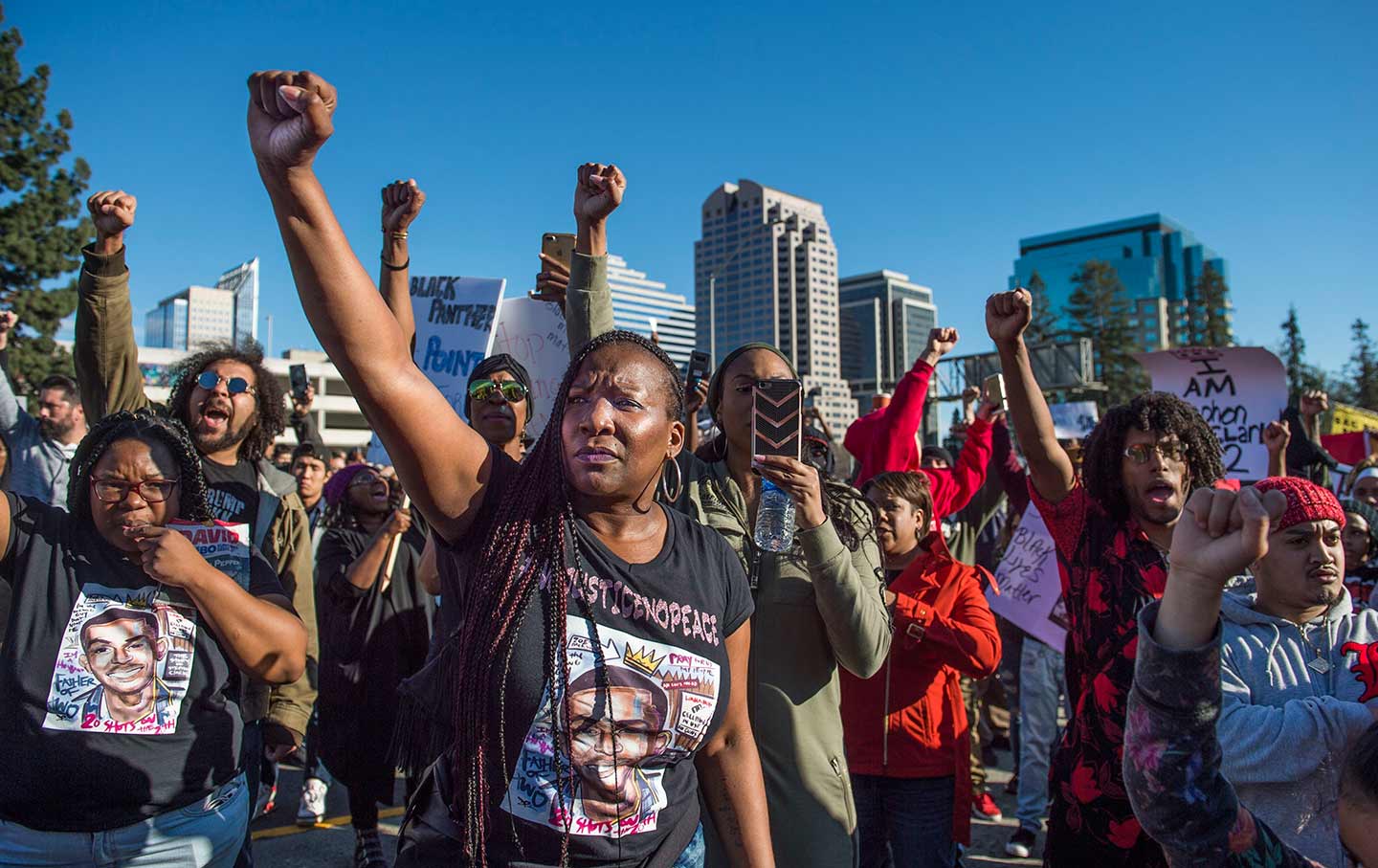 Veronica Curry and other Black Lives Matter activists and supporters raise their fists during a rally on Interstate 5 in Sacramento, California, March 22, 2018. (Hector Amezcua / The Sacramento Bee via AP)

On July 9, 1868, Louisiana and South Carolina approved the 14th Amendment, bringing the number of ratifications to three-quarters of the states and making it part of the Constitution. On this 150th anniversary, when the future of the Supreme Court and the fate of many American freedoms hang in the balance, it is worth recalling the amendment’s complex, contradictory history.

On the one hand, the amendment fundamentally changed the Constitution. It declared anyone born in the country an American citizen, and went on to bar the states from denying them the “privileges or immunities” of citizenship, or depriving any person (including aliens) of life, liberty, or property without due process or law, or of the equal protection of the laws. While its immediate focus was guaranteeing the essential rights of the 4 million emancipated slaves, its language is universal. As a result, it made it possible for all sorts of movements for equality to be articulated in constitutional terms, something previously impossible. The 14th Amendment led numerous Americans to view the federal government as the protector of their rights and to expand the definition of those rights far beyond anything known before the Civil War. In our own time, the amendment’s guarantees of liberty and equality have underpinned Supreme Court decisions establishing the “one man, one vote” rule, and overturning state laws denying the right to utilize contraception and terminate a pregnancy and discriminating in marriage on the basis of sexual orientation.

But there is a profound irony at the heart of the 14th Amendment’s history.

When it comes to the status of black Americans, its promise has never been fulfilled. Beginning during Reconstruction itself, only a few years after ratification, the Supreme Court severely restricted the amendment’s scope as a weapon for racial equality. It defined almost out of existence the “privileges or immunities” arising from American citizenship. It made a fetish of the idea of “state action,” insisting that the amendment barred racially discriminatory actions by state governments and officials, not by private individuals, and as a result making it all but impossible for the federal government to prosecute violence against blacks or racial discrimination in transportation and public accommodations. In 1896, the Court ruled that state laws requiring racial segregation did not violate the equal protection of the laws. It also refused to enforce the 15th Amendment, which sought to guarantee the right of black men to vote throughout the nation, allowing Southern states to disfranchise them.

Of course, the Warren Court of the 1950s and ’60s gave constitutional sanction to the civil-rights revolution. But, with the exception of overturning Plessy v. Ferguson, the decision upholding racial segregation, it did not directly confront the long train of decisions that restricted the 14th Amendment’s reach regarding blacks. Instead, it opted to work around existing jurisprudence. For example, in affirming the constitutionality of the Civil Rights Act of 1964, which barred discrimination by private businesses, the justices relied not on the 14th Amendment’s guarantee of equality but on the Constitution’s clause empowering Congress to regulate interstate commerce. The elevation of the commerce clause into a pillar of human rights in this and other decisions has made the judiciary look ridiculous. Everyone knows that guaranteeing the free flow of goods was not the motivation of those who took to the streets to demand passage of the Civil Rights Act, or of the congressmen who voted for it. The justices could not bring themselves to say that for 80 years the Court had been wrong. More recently, the Court has proved more sympathetic to white plaintiffs complaining of “reverse discrimination” because of affirmative-action policies than to blacks seeking assistance in overcoming the legacies of slavery and Jim Crow. The majority seems to feel that “racial classifications” pose the greatest danger to equality, not racism.

But there is another way of reading the 14th Amendment, one pioneered by the former slaves and their allies and articulated in legal terms by the country’s first generation of black lawyers, who challenged the emerging jurisprudence of the late 19th century. It is too often forgotten that, with one exception, the all-white Southern governments created by President Andrew Johnson after the Civil War rejected the 14th Amendment, making ratification impossible. Congress then required the creation of new ones in which black men voted in large numbers and held public office. These new governments ratified the amendment. In other words: No black suffrage in the South, no 14th Amendment. Yet when the Court has sought to construe the amendment’s purposes and meaning, the black voice is never heard.

The counter-interpretation developed in the 1880s and 1890s remains available today, certainly as plausible, if not more so, than existing jurisprudence. There is no reason, for example, why the “privileges or immunities” of citizens must remain a dead letter, why it cannot be understood to encompass rights not only denied by slavery but essential to full membership in American society, such as access to an adequate education. There is no reason why what the Court dismissively refers to as “societal racism” cannot be taken into account in assessing affirmative-action and school-integration programs, or why the “state action” doctrine must hamstring national efforts to protect the rights of Americans against violation by private parties. 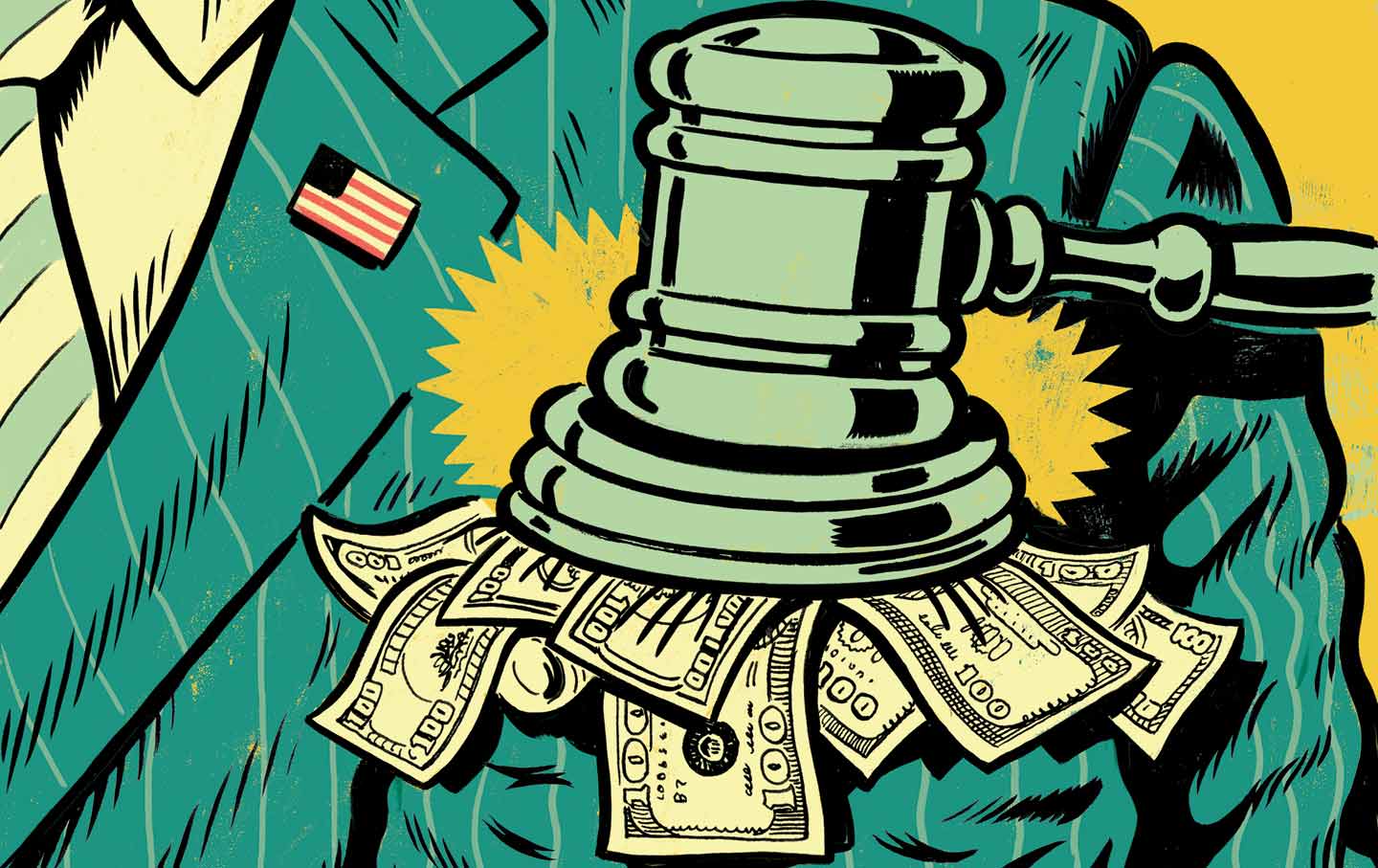 The Long Road to ‘Citizens United’

The language of the 14th Amendment—equal protection, due process, privileges or immunities—is imprecise. Because it cried out for future interpretation, this “indefiniteness of meaning” was a “charm” to John A. Bingham, the Ohio congressman most responsible for the wording. To be sure, this ambiguity also opened the door to the cramped reading that still hangs over jurisprudence today. But rather than lamenting ambiguity, we should, in the spirit of Bingham, embrace it. Ambiguity creates possibilities. Ambiguity paves the way for future struggles.

By themselves, constitutional amendments cannot address all the legacies of slavery. Charles Sumner, the abolitionist senator from Massachusetts, remarked that rewriting the Constitution was not an end in itself but “an incident in the larger struggle for freedom and equality.” With conservatives about to fasten their grip on the Court, it would be foolhardy to expect the latent power of the 14th Amendment to be invoked any time soon. But one day, in a different political climate, this “sleeping giant” (to borrow a phrase from Sumner) may yet be awakened, and its power employed to implement in new ways the Reconstruction vision of equal citizenship for all.