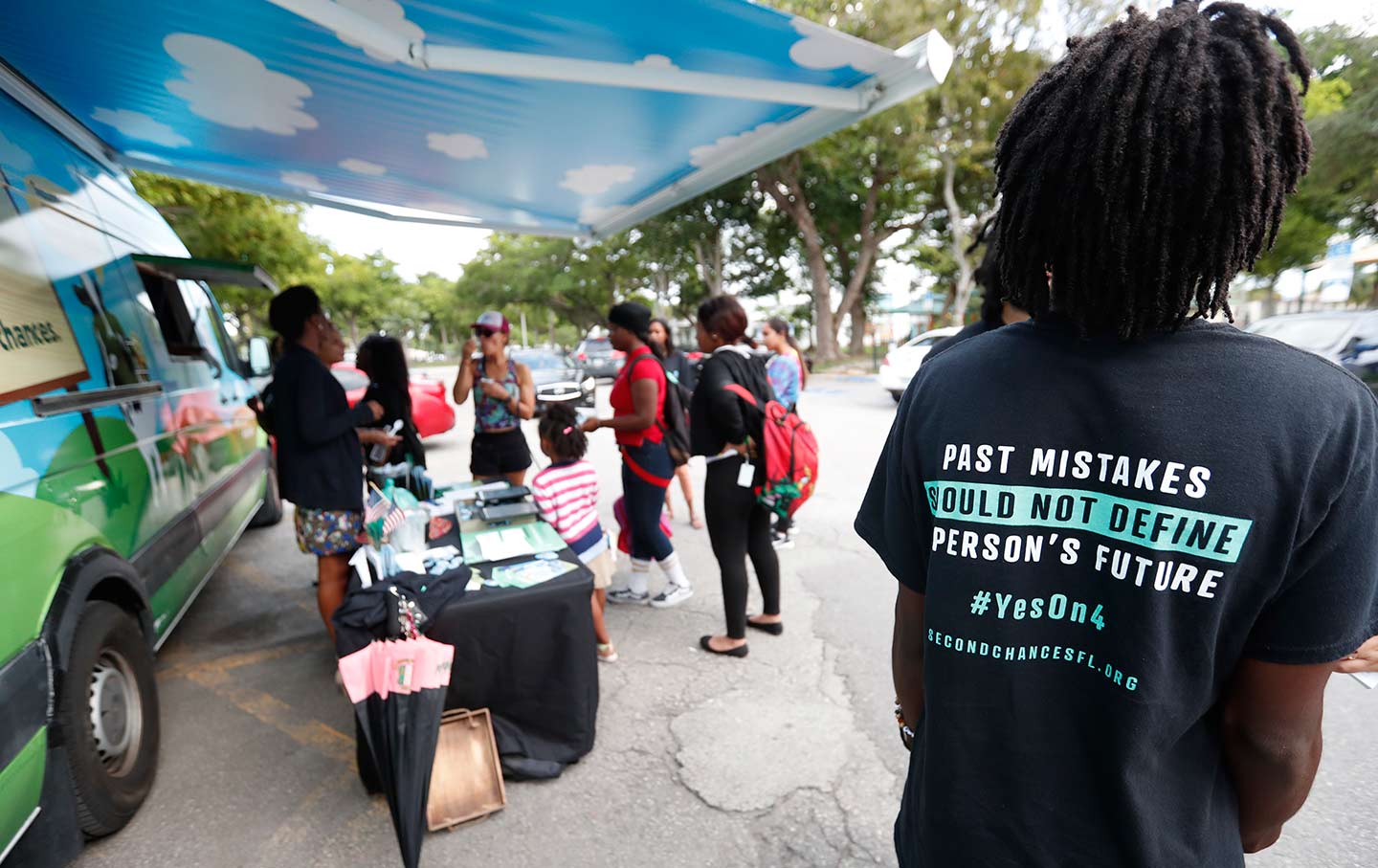 The midterms sent a message to the political establishment: Americans are sick and tired of a democracy perverted by voter suppression, partisan gerrymandering, and a deluge of corporate cash—and they want it fixed. A political party able to capitalize on this anger could see long-term success, and the Democratic Party seems well positioned, especially if it embraces its place as the multiethnic party of the future.

In a single election, voters across the country approved at least 19 pro-democracy ballot initiatives that, upon adoption, will profoundly affect whose voices are heard in our democracy. And these initiatives were not confined to liberal pockets of America—they spanned the country from Maryland to North Dakota to Arizona.

Florida notched the biggest democracy win of the night: Amendment 4, a repeal of a Jim Crow–era state constitutional provision that barred anyone convicted of a felony from voting. Approximately 1.4 million people in Florida, or almost one in every 10 Floridians, were affected by this provision, with African Americans being hit the hardest (approximately one in five potential black voters in Florida was disenfranchised because of it ).

Voting rights for these individuals (not including those convicted of murder or a sexual offense) will be restored, starting in January, in what is one of the most significant expansions of the franchise since the 1965 Voting Rights Act. While it remains to be seen whether additional hurdles (such as payment of all fines before enfranchisement) will be required, Florida’s elections will now better represent those who live in the state. And, as this community is predicted to lean Democratic, this could well prove promising for a Democratic Party looking to expand its reach in a key swing state.

(It should be noted that the Florida GOP, fresh from locking in wins for gubernatorial and US Senate candidates, is now signaling that it might try to slow down re-enfranchisement. But while Sean Morales-Doyle, counsel for the Brennan Center for Justice’s Democracy Program, finds these developments concerning, he believes attempts to undermine Amendment 4 will not get far. “Amendment 4 was drafted quite clearly to be self-executing,” he told The Nation, adding that Florida’s constitution, as now amended, “does not provide the legislature any power to stop the re-enfranchisement of 1.4 million people.”)

AVR and SDR are integral to a 21st-century democracy. AVR creates an opt-out voter-registration system wherein voters are automatically registered during interactions with eligible governmental agencies. In other words, when a potential voter goes to the DMV, for example, they are automatically registered unless they actively decline. This streamlining of the registration process has been shown to increase the number of new registrants, improve voter turnout, and diversify the electorate. And it’s spreading quickly: Between 2015 and the November election, 13 states (plus the District of Columbia) have adopted AVR.

Same-day registration effectively ends voter-registration deadlines, allowing voters to register or update their registration on Election Day or during early voting. Far too many states still require voters to register weeks before the election, disenfranchising those less politically involved. Eliminating this deadline mitigates this problem and significantly increases turnout. And given that some states are aggressively purging voters from the rolls, same-day registration provides a fail-safe for those who are unexpectedly no longer registered and still want to participate in our elections.

Beyond voting rights, voters also limited the ability of politicians to gerrymander district lines in Colorado and Michigan, by creating independent redistricting commissions, and in Missouri, by empowering a nonpartisan demographer to draft state legislative maps. (Long Beach and Santa Barbara County in California passed independent redistricting commissions for local districts, too). While there are slight differences in each plan, the basic premise is the same: The power to draft district lines is given to public officials or commissioners who are either nonpartisan or who represent Democrats, Republicans, and independents, each without any conflicts of interests, and usually with none comprising a majority of the group. These individuals then work to create nonpartisan maps. This nonpartisan system has grown in popularity since California began implementation in 2009. (Utah’s ballot also featured a redistricting initiative, but, as of this writing, it is still unclear whether it will pass.)

The Democrats have major reasons to be concerned with gerrymandering, as their big night would have been even better without extremely gerrymandered maps across the country. In North Carolina, for example, Republicans kept 10 of the 13 US House seats despite garnering barely half of the statewide votes for Congress. Similarly, in Ohio, Republicans won 12 House seats (out of 16), even though they only won 52 percent of the overall vote. And while Democrats across the country performed much better in state races than they have in recent years—flipping 380 state legislature seats, and taking control of eight legislative chambers—state-level gerrymanders thwarted greater inroads. (Republicans, too, suffer from gerrymandering, albeit less so.)

If Democrats want to further break the hold Republican gerrymandering built into the system after the 2010 midterms (when then-President Barack Obama famously commented that his side took “a shellacking”), the party will have to win back the governorship or at least one legislative chamber in the 23 states where the GOP currently has full control. As the electoral map now stands, Republicans are able to gerrymander four times as many seats as Democrats, according to Daily Kos election specialist Stephen Wolf.

There are some potential shortfalls to independent redistricting commissions—from fears about potential gaming of the selection process for commissioners to Americans’ self-sorting into ideologically homogeneous communities, rendering competitive maps difficult. But, overall, the evidence points to the commissions’ working well.

Though this has been less publicized, Memphis, Tennessee, also took a stand for democracy by rejecting a measure seeking to repeal instant runoff voting, an alternate means of vote-counting that allows voters to rank candidates in order of preference. Since it was originally passed in 2008, local politicians had been trying to delay its implementation; they placed a repeal on the ballot this year in a last-ditch effort to get rid of it before they were legally required to put it into practice.

Instant runoff voting (IRV), or ranked choice voting (RCV), gained national attention as Maine adopted it for its federal elections. This year, in fact, marks the first time federal candidates were chosen using ranked-choice voting. Though Senator Angus King easily won reelection with a majority vote, neither candidate for Maine’s Second Congressional District received over 50 percent after the first round of counting—and that triggered an instant runoff. Democrat Jared Golden—who trailed his opponent, Representative Bruce Poliquin, by less than a percentage point in the first round—ultimately won, once third-party votes were assigned to their respective ranked choices. (The Republican incumbent filed a last-minute lawsuit to stop the reallocation of votes, but that effort failed.)

Finally, the fight against big money in politics had major midterm-election successes. In Missouri, included in the same initiative that implemented redistricting reform was a ban on lobbyist gifts above $5 (that’s right, five dollars) to General Assembly members, a two-year wait before former politicians can become lobbyists, and lower contribution limits to state House and state Senate candidates. In a similar vein, Portland, Oregon, amended its city charter to limit campaign contributions and independent expenditures. And Phoenix, Arizona, improved transparency in municipal elections by requiring disclosure on all political spending over $1,000.

North Dakota passed an omnibus initiative to, among other things, ban foreign money in state elections, limit personal use of campaign money, increase transparency, close the revolving door between elected officials and corporations, and establish a nonpartisan ethics commission. Additionally, New Mexico voters moved to create an ethics commission to oversee allegations of wrongdoing, and Florida banned public officials from getting paid to lobby for six years after leaving office.

Most importantly, robust public-financing systems were approved in Denver, Colorado, and Baltimore, Maryland, and New York City vastly improved its system by more than halving the maximum personal campaign contribution for those participating in public financing, and increasing the program’s campaign matching funds from six to one to eight to one.

Public financing is arguably the most game-changing campaign-finance reform, as it empowers marginalized communities by greatly augmenting the power of small donations and, in some cases, neutralizing the power of big money. Public financing has been shown to increase diversity among candidates, elected officials, and donors. Given that today’s donors are overwhelmingly white, wealthy, and male, a multiracial party needs to empower a wider range of voices if it wants to survive. Moreover, robust public-financing systems lead to more political engagement, as politicians spend more time talking to their constituents, and less time talking to big-money donors.

Fortunately, it seems Democrats have taken the hint.

House Democrats have pledged that the first bill introduced in the new Congress will be an omnibus pro-democracy package, which will reportedly include many of the policies voters favored on Tuesday: automatic voter registration, public financing for congressional elections, and independent redistricting commissions for congressional districts. The bill would also restore the Voting Rights Act, which was gutted by the Supreme Court’s Shelby decision in 2013.

Democratic Representative John Sarbanes of Maryland, who authored the blueprint for this package, told The Nation that the Democrats plan to deliver on the “clear message” sent in this election to “make government more responsive to the people.” This democracy omnibus bill, according to Sarbanes, will “end the dominance of big money in our politics, ensure that public servants behave in Washington and make it easier, not harder, to vote.”

And now that Democrats hold unified power in 14 states, with Democratic governors and majorities in both houses of the state legislatures, Democrats in other states might very well follow suit. With a newly minted Democratic majority in its senate, New York will be the state to watch. A real movement has been building to pass early voting and automatic voter registration, and potentially public financing, too. New Hampshire could also be a hotbed for reform. Democrats unexpectedly took back the state House, and local democracy advocates are pushing for a public-financing bill modeled after the one implemented in Seattle.

There’s no doubt: Progress was made this election cycle to un-rig our democracy. But these wins didn’t happen in a vacuum. Over the past few years, there has been a growing democracy movement to advocate for fundamental democracy reforms (Frances Moore Lappé and I chronicle it in our book Daring Democracy). Activists across the country, from North Carolina to Alaska, have organized across identities and partisan divisions, often in the face of tremendous opposition, to make sure all voters have a voice and can participate in our elections. The Democratic Party would do well to support this movement. After all, it’s what the American people want.