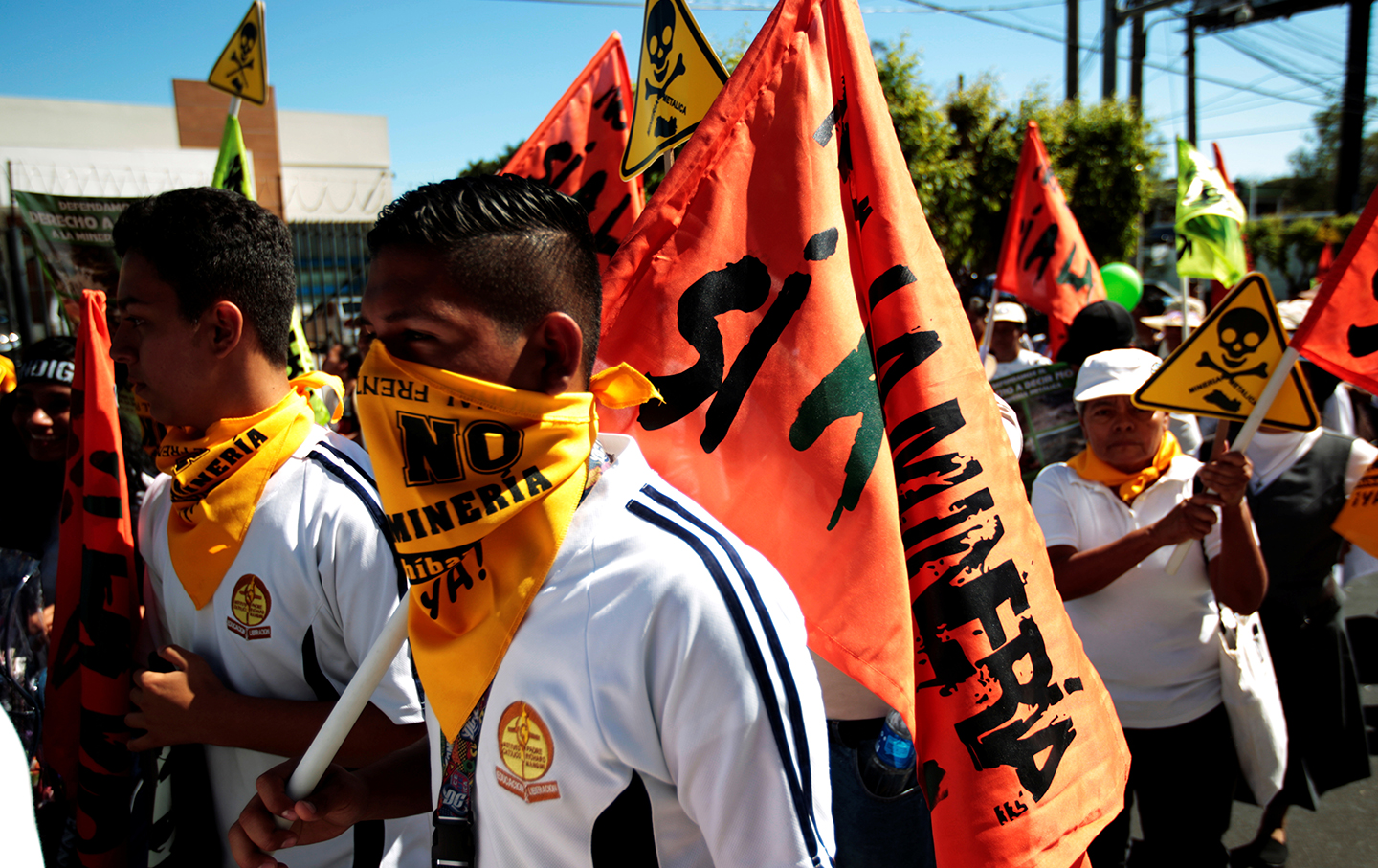 Catholics participate in a march convened by the church against mining in El Salvador, March 9, 2017. (Reuters / Jose Cabezas)

The cry of “water is life” has spread from farmers in El Salvador, over a decade ago, to families in Flint, Michigan, to the Standing Rock Sioux in North Dakota, and now to lawmakers in El Salvador.  1

This historic vote would have been unthinkable until very recently. On a trip to El Salvador last summer, we asked a wide range of people, including the chair of the Legislative Committee on the Environment and Climate Change, if they could imagine El Salvador ever passing a legislative ban on industrial mining, given its devastating environmental costs. Everyone told us versions of “no.”3

Mining companies have been dangling tens of millions of dollars in the faces of Salvadorans for over a decade.

Yet on Tuesday, March 28, one of us stood with that very same legislative chair, Dr. Guillermo Mata, an hour before he rallied his committee to a unanimous vote for just such a ban. The next day, the full legislature voted in the ban, with all members present from all parties voting in favor.4

To understand the extraordinary nature of this victory, you need to understand the tens of millions of dollars that mining companies have been dangling in the faces of Salvadoran farmers and politicians alike for over a decade.5

As The Nation has chronicled in a series of articles, mining companies rushed into the country in the early 2000s as gold and other mineral prices skyrocketed, in part due to the rapid growth of the Chinese economy. Skeptical farmers from the gold-rich north of the country visited gold-mining communities in nearby Honduras and came home with stories of environmental havoc unleashed by the toxic cyanide used to separate the gold from the surrounding rock.6

These groups formed the National Roundtable Against Metallic Mining in 2005, beginning a massive campaign to raise the alarm about the threats mining posed to the Lempa River watershed, which runs through gold country and supplies water for over half the country’s population. They quickly pulled the Catholic Church to their side, and pushed for an end to mining. By 2007, a University of Central America poll showed that close to two-thirds of the public opposed mining. The pressure became so strong that the president at the time, who represented the right-wing ARENA party, announced he would stop issuing mining licenses until there was a comprehensive economic and environmental review.7

The mining companies were furious. Two of them launched lawsuits in 2009, claiming violations of their rights under a World Bank–inspired investment law and the flawed trade agreements that have generated such anger in the United States and all over the world.8

The Institute for Policy Studies, MiningWatch Canada, and dozens of other groups formed a network of International Allies that has held countless protests and produced studies, articles, protest songs, and joint statements from Washington, DC, to Vancouver to Toronto to Melbourne to Manila.9

The Global Fight Against Corporate Rule

Meanwhile, the main mining company, OceanaGold, persisted not only in its legal bullying tactics but also in a global propaganda campaign and intense lobbying of politicians in El Salvador. In October 2016, it faced a stunning setback when the World Bank tribunal with jurisdiction over the lawsuit—a body that tends to be biased in favor of corporations—ruled unanimously that the mining company had no basis for its suit and ordered it to pay the government of El Salvador $8 million. Undaunted, OceanaGold not only failed to pay what it owed, it actually stepped up pressure on El Salvador to let it mine, and launched a new PR campaign on how it was a green and “responsible” mining company.10

In a country that has suffered decades of aggression from the United States and global corporations, this arrogance sparked renewed resistance. The Catholic Church joined the calls for a legislative ban, and the National Roundtable members organized marches and other protests. The International Allies group gathered signatures of 280 groups, representing over 180 million people, telling the company to “pay up and pack up.”11

Groups arranged for a week-long visit in El Salvador of the Philippine governor of the province where OceanaGold has been despoiling the environment around a gold mine for years. The governor, Carlos Padilla, testified before the Environment and Climate Change committee just before its historic vote.12

Four anti-mining activists have been murdered, and many other local community members have received death threats.

By the time of the vote in the Legislative Assembly, members of multiple parties displayed banners saying “No to Mining, Yes to Life” in front of their seats in the chamber.13

This victory is a tale of perseverance in the struggle for justice. Four anti-mining activists have been murdered in gold country, and many other local community members have received death threats. The odds for victory seemed remote at many times. Yet ordinary people in this very poor country never gave up, never wavered.14

While El Salvador is the first to adopt a total ban on metallic mining, during the many years of this struggle there have been important victories against destructive mining in other countries. Movements have won an end to mining in indigenous areas in Panama, a ban on open-pit mining and the use of cyanide in Costa Rica, an end to mining in the uplands of Colombia, and an end to mining near glaciers in Argentina. In the Philippines, an activist minister of the environment has initiated the suspension of mining at numerous sites.15

Across the world, people are choosing water over gold.16