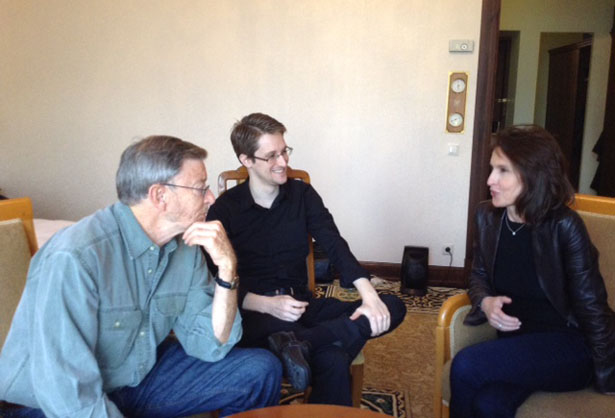 On October 6, Nation editor and publisher Katrina vanden Heuvel and contributing editor Stephen Cohen sat down in Moscow for a rare and wide-ranging conversation with Edward Snowden, whose courageous actions exposing the extent of warrantless surveillance of millions living in the United States by the NSA have sparked a critical, unprecedented and transformative debate about mass surveillance. Among other issues, they discussed the price Snowden has paid for speaking truth to power, his definition of patriotism and accountability, how his experience has changed his view of US history and his frustration over America’s political system. What follows are a few passages from their conversation. A longer edited version will be published in a forthcoming issue and at TheNation.com.

Edward Snowden: So, in terms of patriotism, I would say that what defines patriotism, for me, is the idea that one elevates—or they act to benefit—the country, right? That’s distinct from acting to benefit the government, and that distinction, that’s increasingly lost today. You’re not patriotic, just because you back whoever is in power today. You’re not patriotic because you back their policies. You’re patriotic when you work to improve the lives of the people in your country, in your community, in your family, those around you.

And sometimes that means making hard choices, choices that work against your own personal interest. You know, people sometimes say I broke an “oath of secrecy,” that was one of the early charges leveled against me. But it’s a fundamental misunderstanding, because there is no oath of secrecy for people who work in the intelligence community. You’re asked to sign a civil agreement, called “Standard Form 312,” which basically says, if you disclose classified information they can sue you, they can do this, that and the other. And you stand at risk of going to jail. But you are also asked to take an oath, and that’s the oath of service. The oath of service is not to secrecy; it’s to the Constitution—to protect it against all enemies, foreign and domestic. That’s the oath that I kept, that James Clapper and Keith Alexander did not.

Stephen Cohen: You signed that?

ES: You raise your hand, and you give the oath in your class when you “on-board.” All incoming officers are made to do it when you work for the Central Intelligence Agency. At least, that’s where I took the oath—as well as another in the military.

But “whistleblowing,” as a label, calling someone a whistleblower, I think that does them—it does all of us—a disservice, because it “otherizes.” Using the language of heroism, calling Dan Ellsberg a hero, you know, all these people who made great sacrifices—what they have done is heroic—but to distinguish them from the civic duty they have performed by saying they are heroes excuses the rest of us from the same civic duty to stand up and say when we see something wrong, when we witness our government engaging in serious crimes, when we witness the people in power abusing that power, engaging in massive historic violations of the Constitution of the United States. We have to stand up and say something, or we are party to that bad action.

KvH: In light of your personal experience—the risks you’ve taken, you’re sitting here in Moscow. When you think of a young man or woman who might want to take comparable risks, do you think your experience encourages or discourages that?

ES: I think when you compare my example to the example of Chelsea Manning—who revealed the Iraq war logs, which showed that there were attacks against civilians, whether intentional or unintentional, that had been concealed by the military; the fact that there were people being held indefinitely that classified documents had said did not represent a threat to anyone or any state or any government anywhere but were instead being held for intelligence purposes and would never face any charges against them. You know, these are the kinds of things voters in a democracy need to know in order to make meaningful choices. But when they were brought forward—regardless of your opinion on how it was done or whether it could’ve been done better or if it was a good or bad thing—Manning got thirty-five years in prison. Meanwhile, I’m still free. I talk to people in the ACLU office in New York all the time. I’m able to participate in the debate. I’ve been able to campaign for reform, and I’m just the first to come forward in the manner that I did and succeed.

There’s a danger when governments go too far to punish people for actions that are dissent rather than a real threat to the nation; they delegitimize not just their systems of government, not just their systems of justice, but the very legitimacy of their government. Because when we bring political charges against people for acts that were clearly intended to work in the public interest, we deny them the opportunity, the ability, to even mount a public-interest defense. The espionage charges they brought against me, for example, explicitly deny the ability to make a public-interest defense. There were no whistleblower protections that would’ve protected me—and that’s known for everybody who’s in the intelligence community. There are no proper channels for making this information available when the system fails comprehensively.

The government would assert that individuals who are aware of serious wrongdoing in the intelligence community should bring their concerns about these programs to the ones most responsible for that wrongdoing, and rely on those people to correct the problems that those people intentionally authorized. It’s clear that doesn’t work. We see in the case of Thomas Drake, who brought forward serious evidence of waste, fraud and abuse in the government and the mass surveillance programs, Bill Binney, Kirk Wiebe, Ed Loomis and other whistleblowers in the past, going all the way back to Dan Ellsberg. The government is not concerned with damage to national security because in each of these cases, damage did not result.

At the trial of Chelsea Manning, the government could point to no case of specific damage that had been caused by a massive revelation of classified information. The charges are a reaction to the government’s embarrassment more than genuine concern about these activities, otherwise they would substantiate what the harms were. We’re now more than a year on from the NSA revelations, and despite numerous testimony before Congress, despite tons of off-the-record quotes from anonymous officials who have an axe to grind, not a single US official, not a single representative of the United States government has ever pointed to a single case of individualized harm caused by these revelations. This, despite the fact that Keith Alexander, former director of the National Security Agency, said this would cause grave and irrevocable harm to the nation.

KvH: Are you looking forward to Laura Poitras’s movie [Citizenfour]? I think it is going to have a big impact.

ES: She’s very impressive. Of all of the journalists that I’ve worked with, she was actually the most conscious of operational security out of anybody. I don’t know if it’s because she had spent time in the war zone or what. But she was very rigorous in how she followed everything, and that was really encouraging. It’s rare for me to meet somebody who can be more paranoid when it comes to electronic security than I can be.