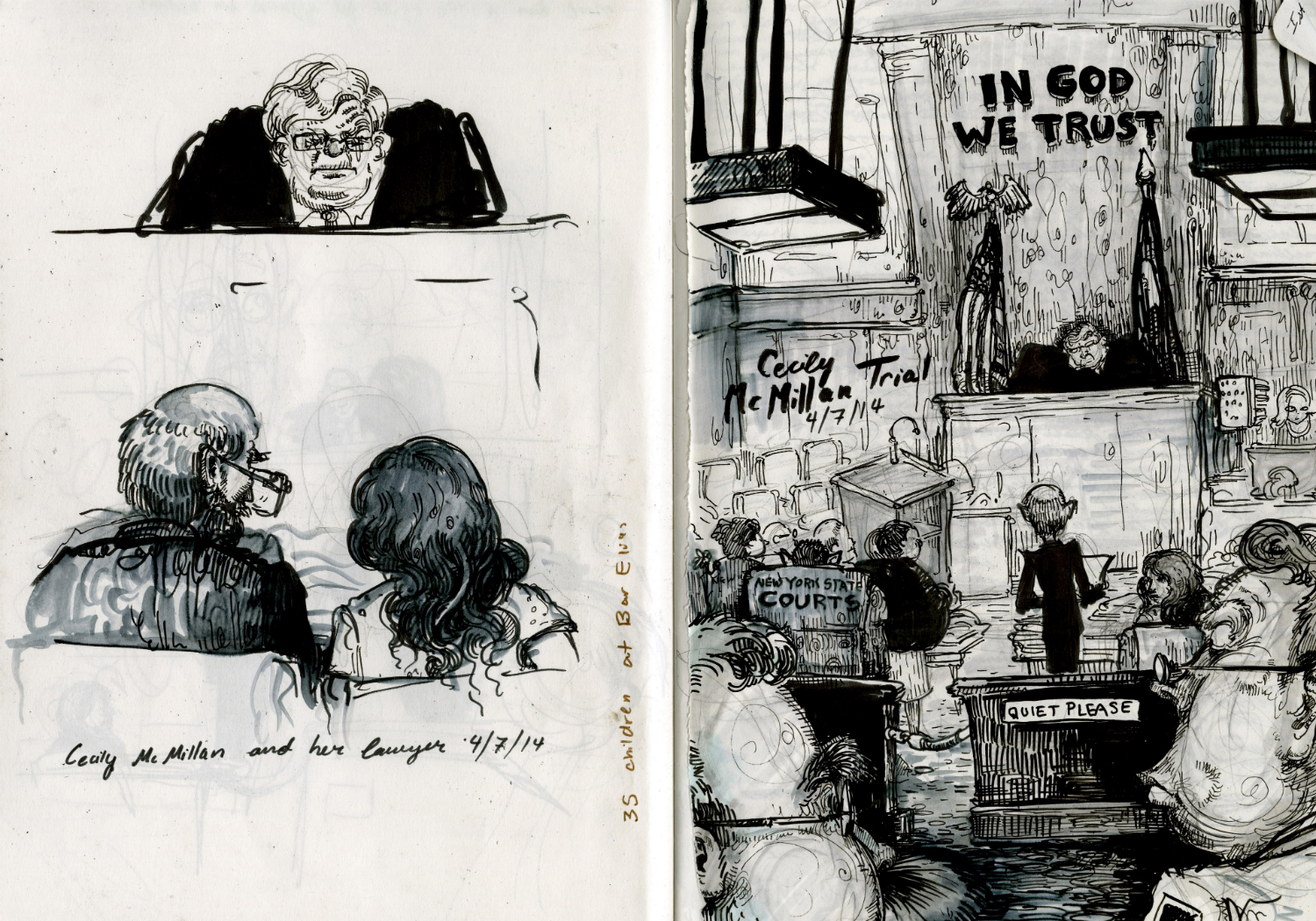 Pretend you have to choose a book: one is a lurid airport paperback written for people who don’t like to read, the story of a bad girl getting taken down a peg; the other is missing half its pages and it has a lot of footnotes. You’d choose the first book, whatever its faults—you can’t even tell what the second one’s about.

This was essentially the choice presented to the jury of Cecily McMillan’s trial by the rulings of Judge Ronald Zweibel. In a fair trial, the jury must consider two full texts and answer a reading comprehension question: In this case, is there any reasonable doubt that McMillan intentionally assaulted a police officer for the purpose of preventing him from performing his duties? But when the jury convicted McMillan on May 5, they had really been given only one side of the story.

McMillan was arrested on the night of March 17, 2012, which fell on both St. Patrick’s Day and the six-month anniversary of the Occupy movement—a date that would also become known for the seventy-three arrests that occurred in Zuccotti Park that night. While the police were clearing the park of the throng of protesters, McMillan’s elbow struck Officer Grantley Bovell’s face. The defense argues that this event occurred when McMillan, exiting the park as directed, was suddenly grabbed from behind by her right breast. Her elbow then struck Bovell when she startled, without intent to strike him or knowledge that he was a police officer. The prosecution claims that McMillan hit Bovell with her elbow without provocation while he was escorting her from the park. The fact that the blow was struck was never disputed; the question was whether the blow was provably an intentional assault of an officer.

Throughout the case, the prosecutor set out to distract the jury from the question at hand by discussing undocumented events, treating witnesses’ opinions as fact and casting aspersions on McMillan’s character. Judge Zweibel gave them free rein to do so, while consistently ruling key testimony and evidence for the defense inadmissible. This pattern was most clearly demonstrated in the court’s treatment of evidentiary video footage. Several videos posted to YouTube show the crowd at Zuccotti Park from different angles on the night in question. However, the jury saw only a sliver of blurry footage. According to the defense, out of a ten-minute video of the events before and after McMillan’s elbow struck Bovell’s face, only fifty-two seconds was admitted. Zweibel’s justification? At the beginning of this fifty-two-second section is the first frame in which Bovell says he can definitively identify himself.

It’s particularly convenient for Bovell that none of the contextual footage was shown. Another piece of his testimony was directly contradicted by the melee shown at the beginning of the video, in which another officer shoves a protester and announces through a bullhorn, “Leave the park or you will be arrested.” Bovell testified that there was an announcement that the park was being temporarily cleared for routine cleaning, at which point the belligerent protesters suddenly began to cause trouble for the polite police force. The violence with which the police are shown to interact with unresistant protesters in the full video is key to understanding the events of that night. But the judge ruled this footage inadmissible because Bovell’s memory, which proved extremely selective under cross-examination, conveniently didn’t coincide with it. One of the jurors anonymously told The Guardian that it was this fifty-two-second clip, taken out of context, that led the jury to its guilty verdict.

Another short clip was only allowed without sound—this one shows McMillan convulsing on the ground after her arrest. In that audio, jurors would have heard voices in the crowd shout at the police officers to help McMillan, which provides important context to the officers’ motionless observation of her body. If McMillan were faking distress, as the prosecution alleged, it certainly fooled many of those present. Had audio been admitted, the prosecution would have been free to argue that the crowd’s assessment was incorrect, but when the audio of the footage was ruled to be prejudicial, the ruling seemed calculated to bolster the prosecution’s narrative. The police officer’s casual reactions were there for the jury to note, but not the reactions of the civilians. Zweibel, through his selective admittance of clips, looked increasingly like an editor of those YouTube parodies of movie trailers in which The Shining is edited to look like a family comedy, or Mary Poppins is recut as a horror film. The prosecution became the director dictating a vision for the story, and Zweibel acted as the editor, selecting footage to tell the tale.

Throughout the trial, the courtroom rang out with objections, but the judge’s rulings fell overwhelmingly in favor of the prosecution. Zweibel sustained so many of the prosecution’s objections that several times he said “sustained” before Assistant District Attorney Erin Choi could even say the word “objection”. Some courtroom onlookers began placing bets on how many “sustains” for the prosecution Zweibel would pronounce. Drew Mitchell, a member of the group Justice For Cecily who attended the trial, was shaken by the pronounced inequality of the judge’s treatment of the two sides: “Every rule that could be enforced on the defense was enforced. The prosecution had no rules.”

McMillan’s character and history were not only scrutinized but mocked. When defense witness Yoni Miller described McMillan’s reputation in Occupy forums as “queen of nonviolence,” ADA Choi cried, “She is a fraud!” When Miller described seeing McMillan convulsing unaided on the pavement, Choi flailed her arms and hips in an exaggerated, ridiculous fashion, archly asking if her imitation of a seizure resembled McMillan’s. The prosecution’s portrait of this accomplished young activist, says Shay Horse, one of her supporters, is that of “a publicity-crazed millennial,” an image that dovetails with their claim that McMillan hit Bovell for attention from the cameras. In her closing arguments, Choi extended her jeering tone to general statements about assault and those who are assaulted. She said that Bovell would have had to have iron hands to leave a bruise through clothes. Tim Eastman, who attended the closing arguments, tweeted: “Pros[ecutor] says Cecily is ‘not shy’ and therefore ‘would not have trouble reporting sexual assault.’”

While the prosecution took copious liberties in their depiction of McMillan, any attempt by the defense to question Bovell’s testimony or bring up his record was quickly shut down by Choi and Zweibel. Although Bovell’s involvement in the Bronx ticket-fixing scandal was discussed, the defense was prevented from addressing other, violent parts of his record. In 2010, he was involved in a lawsuit against the NYPD for his participation in an incident in which NYPD officers ran off the road a teenage boy on a dirt bike. In 2009, he kicked in the face a suspect lying on the ground. He allegedly assaulted Occupy protester Austin Guest on the same day as McMillan’s arrest. These episodes were not permitted to be entered into evidence. When Stolar explained to Zweibel that he had two eyewitnesses (uninvolved in the pending lawsuit against Bovell) who saw Guest be lifted up by Bovell and a second officer and slammed head-first into each row of seats on the bus used to transport prisoners to court, the judge exclaimed, “He must have been resisting!” and called the allegations hearsay.

Concrete evidence supporting the defense’s argument was consistently rejected in favor of the suppositions of the prosecution, whose arguments were often based on a lack of evidence instead of its presence. For example, while there is photographic evidence of McMillan’s bruises, coinciding with her story that her breast was grabbed, the prosecution was permitted to speculate that they were self-inflicted. Their alternate story involves Bovell’s helping out a female officer at whom McMillan was cursing, though no one in the trial could determine this female officer’s identity or even if she exists. The prosecution’s claims that McMillan faked a seizure and had no bruises when she was admitted to the hospital are based on the lack of notes taken during her medical treatment.

And was she really unwell? Bovell testified that he told her, “If you can speak to me, you can breathe.’ “What medical degrees do you hold?” asked the defense attorney, Martin Stolar. “Objection,” said the ADA flatly. “Sustained,” said the judge, sounding bored. Now he had decided he didn’t find speculation unacceptable.

In her closing argument, Choi scoffed contemptuously that McMillan’s story would be more believable if she claimed that “aliens came down that night and assaulted her.” Let us consider: according to the prosecution, it’s more believable that an activist whose reputation is founded on nonviolence would change her plan to go out with friends on a holiday to pick a fight with a possibly fictional police officer, then exhort bystanders to please film her elbowing another officer in the face, for attention. After her arrest, she goes on to elaborately fake a harrowing seizure, and at some point after her admission to the hospital self-mutilates in order to severely bruise her own breast for the purpose of framing Bovell. This is more believable?

This is more believable than the possibility that on a night when protesters were arrested in a manner that The New York Times described as “brutal and random,” an officer who once kicked a suspect in the face grabbed McMillan’s breast, in a way consistent with bruises that were entered into evidence, and she flailed out with her elbow in a startled reaction? More believable than the idea that an officer on probation at that time for being involved in a ticket-fixing scandal would need a justification for the bruises on his prisoner and his public indifference to her medical distress?

Ultimately, to Judge Zweibel and his court, it was more believable that this young woman is simply crazy than that this man could commit an act of sexual violence and lie about it, in a manner consistent with both his personal history and the culture of the institution that employs him. It’s not even a good story, but it had a hell of an editor. In a just system, editors don’t belong in courtrooms—and Cecily McMillan doesn’t belong in prison.