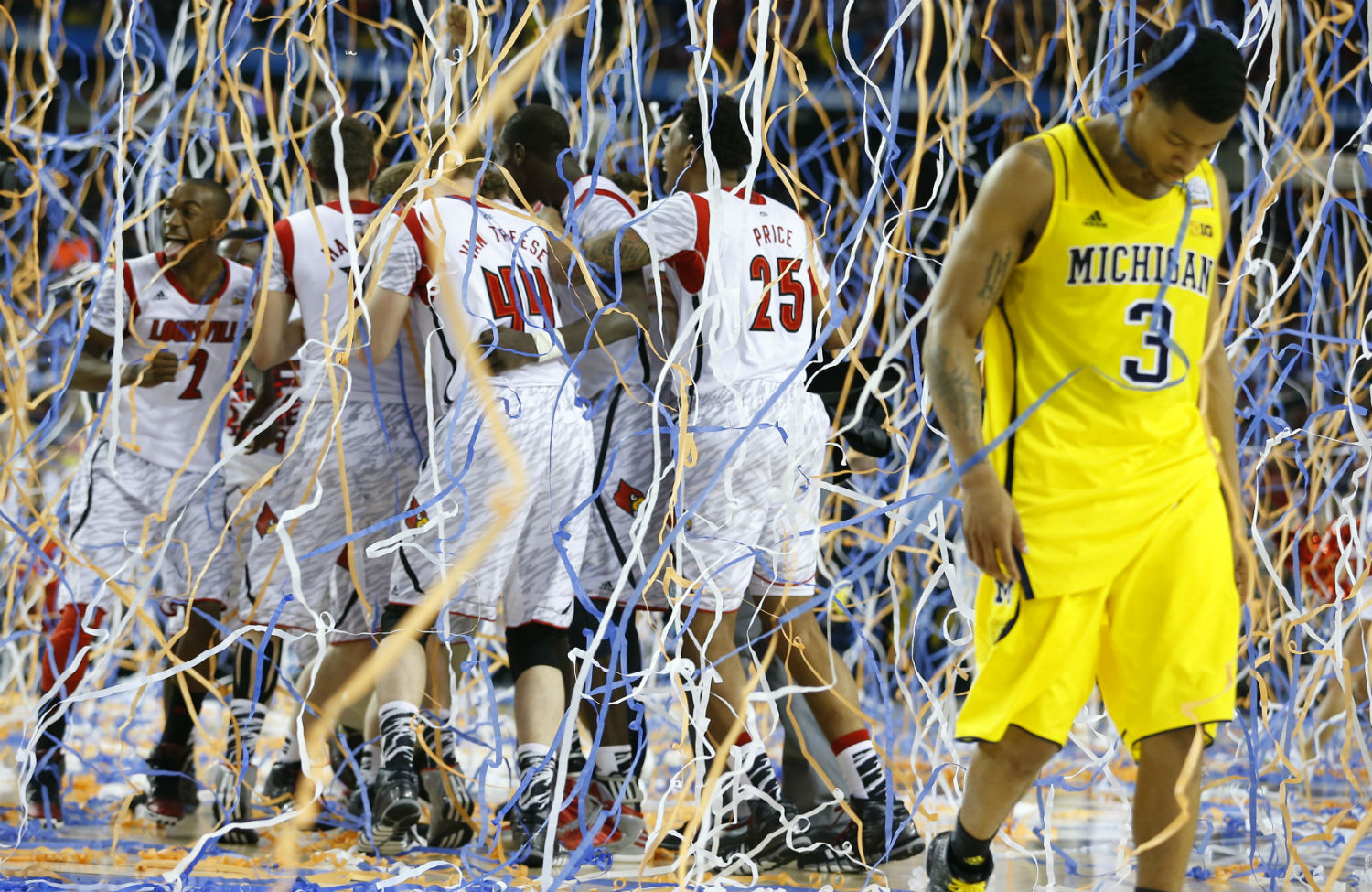 Michigan Wolverines guard Trey Burke (right) walks off the court after losing to the Louisville Cardinals in the 2013 championship game. (Reuters/Jeff Haynes)

On Thursday I spoke  to Andy Schwarz, a leading anti-trust economist, for some straight common sense about about the NCAA, college sports and paying athletes. His words should be CliffsNotes for everyone watching March Madness.

On why NCAA athletes should receive some sort of monetary compensation:

I always say the question of whether they should get paid is the wrong one. I think the question is, “If the NCAA weren’t colluding against them, would they get paid?” And the answer is, “Yes, they would.” We all should have the right to earn what we’re worth, to go in and ask for it, and if we’re not worth much, we won’t get much. The fact that the NCAA is so adamantly insisting on enforcing a rule to prevent anyone from getting paid I think is a good sign that if the rule weren’t there, they would.

On what kind of system would make the most sense:

I think the simplest system is almost no system at all. Or if you insist on having some rules, have them at the conference level.

The best system is one where teams make their own decisions. In college, if you had each of the ten football conferences or thirty-two basketball conferences competing, they could make their own rules. They could set a level of parity among the schools within the conference and then go off and compete for talent in such a way that if a school up in Minnesota or Maine or Massachusetts thinks hockey players are worth something, then they would get paid. In most places, football and basketball players would get paid. I went to Stanford. Women’s basketball players would be in demand there. Probably at Connecticut as well.

On whether paying athletes would be either a legal violation of Title IX, or wreck women’s sports:

Both of those things are 180 degrees wrong. Title IX is really specific to what it does and doesn’t require. People probably think that Title IX requires that men’s sports and women’s sports get equally funded and it doesn’t say that at all. In 2009–10, Alabama spent $43 million on men’s sports and $13 million on women’s sports, and they weren’t in violation of Title IX because all Title IX says with respect to money is that, however many men you have playing sports, the money they get has to be proportional to the ratio. So if you’ve got 60 percent male and 40 percent female athletes, then the money that they specifically get in scholarships has to be 60:40, plus or minus a tiny margin for error. Now you have a system where the player “pay” is capped and the way that schools compete for talent is to pay coaches more and more to get them to recruit, This shifts money away from areas where Title IX does apply—the money that goes to players—to areas where it doesn’t apply. So if we change the system and we allow schools to compete for talent with pay, you’d see coaches’ pay go down, you’d see male athletes’ pay go up. But every time you increase the male athletes’ pay by a dollar, and it’s not quite a dollar in matching, but there would need to be, under the law, a matching payment to women.

On how paying players would control obscene college coaching salaries:

To be clear, tomorrow they won’t rip up a contract that’s in place. This is a five-to-ten-year transition. And if the NCAA were being proactive about it instead of scorched earth, they’d be planning for it. Effectively, when firms—and these schools when they’re out there hiring coaches and when they’re hiring athletes like a normal business—figure out what they want to pay a person and the benefits they get from increased quality, that sort of sets a market rate. But in the current system, players can’t be lured with pay, so a school comes up with a secondary means of payment: a nicer locker room, a waterfall in my hydrotherapy room, a promise of winning, a greater chance of playing pro. And good coaching is also a perk. But coaching is a relatively scarce resource, and the best coaches take advantage of that because they are in a free labor market. There was an attempt in the 1990s to cap coaches’ pay too. The coaches took them to court and the court slapped it down really, really fast. That’s called price-fixing. As a result, when you want to spend more dollars on talent and you can’t, you spend it on more facilities and you spend it on more coaches. In contrast, growth in revenue in the NBA and in the NFL mostly flows to the players. Coaches make about 5 percent of total payroll in those leagues and—even if you count the value of a scholarship as a fixed salary—coaches can make twice as much in football and seven times as much in basketball, as their team. [Editor’s note: Schwarz clarified that by this he meant that coaches can get 200 percent (in FB) or 700 percent (in BB) of what their athletes’ scholarships are priced at, in total across the whole team.]

On whether paying college athletes would increase a culture of entitlement:

I think the people who are most entitled are athletic directors who were born rounding third base and think they hit a triple. They are being paid for effectively expropriating what the athletes would get in a market. When I hear coaches talking about this too, it’s like, well, the real market rate for all your talent has been doubled by the fact that you’re sucking money away from people from who, if they were allowed to earn based on their skill and hard work, would be making the most money, so that your salary can go up. I read yesterday that Michigan sent a letter to the girlfriend of a player to try to convince her to try to convince him to come to Michigan. Those are the sorts of crazy, indirect things you have to do when you can’t say we want you so much that we’ll up our offer by $10,000.

On the odd political alignments around the issue of paying athletes:

There is a strain of people on the left who see the whole process of rewarding people within a college structure for something that’s not academic to just be fundamentally wrong. So the idea that they have a market value in a system like that, it’s strikes them as being wrong and they might go to the point of saying it’s immoral. These people ought to be more interested in school. Your values should be the same as my values.

On the right wing—some of it is because unions have gotten involved and they’re just knee-jerk anti-union—people are conservative and change is hard. So the idea that this might change the nature of football, it might change the strict hierarchy as coach as father and players as children to something more like a partnership. That’s also threatening.

I wish we could see it as something along the lines of: let these people be. Young men, a lot of times, come from backgrounds of poverty. Let them use their entrepreneurial spirit to earn their keep. And to the left, I think we should say, “Isn’t this a great way to end what’s really a regressive tax, where the earnings of young black men are basically taxed at 100 percent to pay for the salaries of largely middle-class, middle-aged white men?”