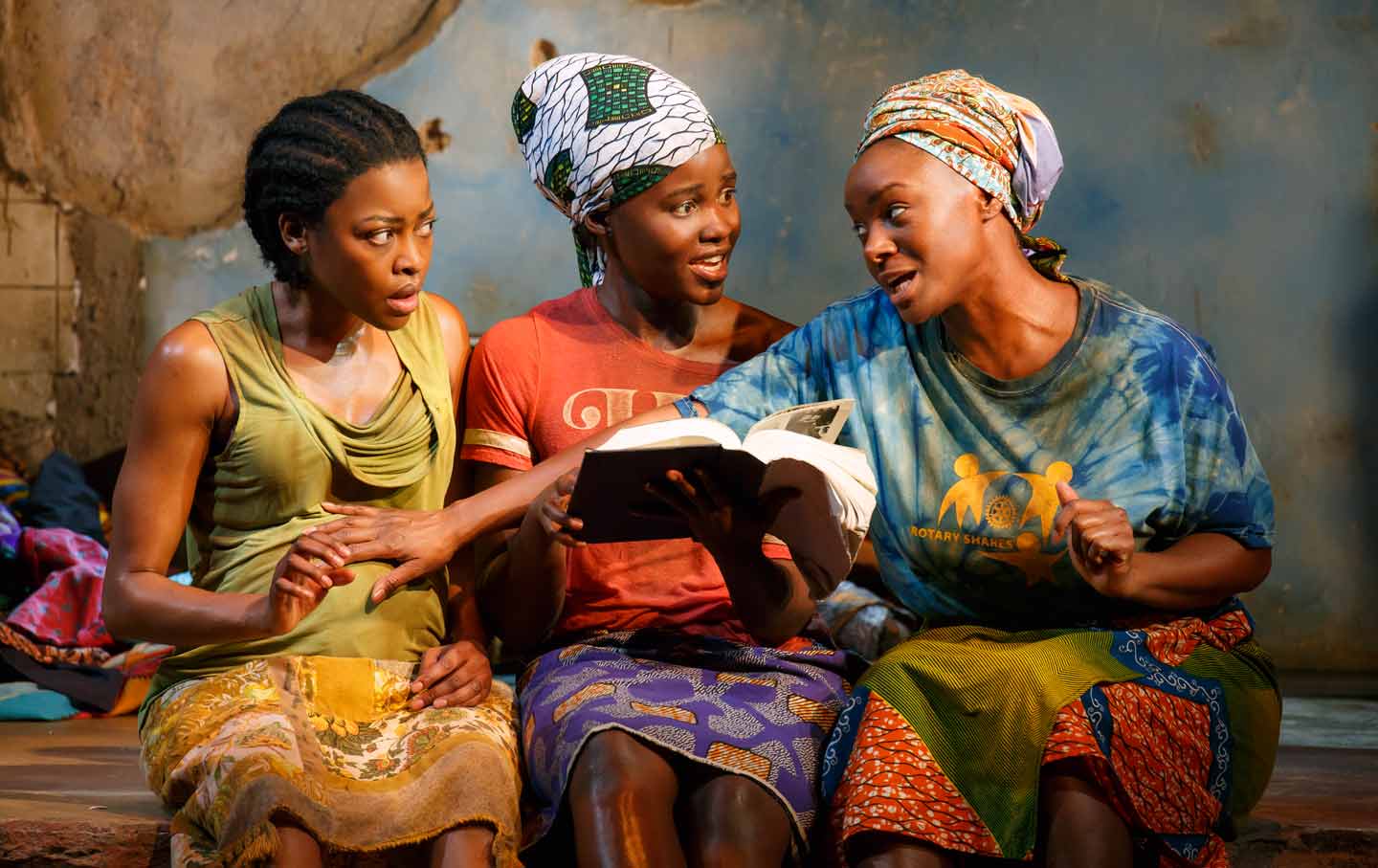 In the new Broadway play Eclipsed, the home of three women stands center stage, literally and metaphorically. The three women, nameless for much of the play, are the “wives” of a man they call The C.O., a rebel leader in the second Liberian Civil War. The women wait in fear for The C.O. to come to their door, beckoning them one at a time so that they may do his sexual bidding. The audience never sees or hears him—his presence is only implied as the women periodically stand side-by-side in their room, looking fearfully out the door at his presumed figure. The rapes have never occurred inside the home, and while bullet holes line its walls, it remains a relatively safe place for the women to express themselves and retain their individual identities. Even the darkest circumstances, the play suggests, cannot completely obscure the humor, affection, and camaraderie that naturally develop among us.

In 1996, a peace accord ended the first Liberian Civil War, and Charles Taylor was elected president in 1997. Tensions continued, however, and a second civil war broke out in 1999 when Liberians United for Reconciliation and Democracy, a group of exiles based in Guinea, attacked its home country. In 2003, another group, the Movement for Democracy in Liberia, joined in the fighting and rapidly overtook Taylor. The leader resigned in late 2003. Eclipsed takes place just before Taylor’s resignation, as chaos consumed the country and rebel leaders set up compounds where they brought women and children they’d kidnapped from towns they’d ravaged.

Notably, the end of the war led to the election of the first female president throughout all of Africa, Ellen Johnson Sirleaf. This proved a major victory for women in Liberia, and Sirleaf was especially receptive to issues concerning women. She and social worker Leymah Gbowee won the Nobel Peace Prize in 2011 for their peacemaking efforts in the country, and Gbowee routinely held “peer reviews” with the president to discuss ways in which the leader could better help women. Eclipsed does not reference any of this history. The play is not about women’s victories on a grand political scale. Instead, it focuses on the minor, more mundane struggles and triumphs of Liberian women at a particular moment in time. In this way, Eclipsed sheds light on the untold stories of the women who lived through the war.

The play, written by Danai Gurira and directed by Liesl Tommy, never actually makes explicit what sort of “eclipse” its title references, who’s standing in the way of whom. Its clearer message is how crisis can bring forth our inner darkness and eclipse our better selves. The play’s central character, named only The Girl (Lupita N’yongo), begins as a faultless victim who eventually commits violent acts of aggression. Two warring identities—victim versus militant—jostle within her.

All five women in the play fully embody their three-dimensional characters and effectively inspire empathy for their individual plights. But N’yongo’s performance merits particular mention. At the opening of the play, N’yongo, more recognizable as the stylish red-carpet queen, appears as an impoverished young girl, an ingénue with ripped clothing who has no idea how bad things are about to get. The audience knows and watches in horror as her circumstances worsen.

Nyong’o’s character, The Girl, is new to the home, after escaping her own devastated village. The C.O. rapes her and makes her wife No. 4. Wife No. 3 (Pascale Armand), who’s pregnant with The C.O.’s child, and whose name we discover later to be Bessie, provides comic relief with a running gag about her vanity (in particular her concern with her hair and wig) as her stomach grows. Bessie and No. 1, or Helena (Saycon Sengbloh), listen eagerly as The Girl reads them a book about Bill Clinton. (Wife No. 2, or Maima, is conspicuously absent for much of act one.)

Helena and Bessie are enthralled by the Monica Lewinsky soap opera. The tale gives the women a sense of the world outside their restrictive compound and introduces political alternatives to the dictators, warlords, widespread rape, and oppression that they know. As the only literate woman in the home, The Girl becomes the women’s Scheherazade, and her routine readings give the others something to look forward to. Helena, in particular, begins to understand the power that literacy has to create an expansive worldview, even in the face of dire immediate circumstances.

The reading-as-empowerment theme reemerges in the second half of the play when Rita, a woman from a peacemaking organization, visits the compound and offers to teach Helena to read. Self-conscious at first about her ability to learn and reluctant to make any changes to the quiet life she’s constructed for herself, Helena eventually consents to being taught. The possibilities for her postwar future expand in new, hopeful directions. Yet the play makes clear that an ability to read won’t nearly solve everything: The trauma that the women endure stifles forward movement. The play indicates that after at least 10 years as No. 1, Helena will face plenty of hardship as rebuilds her life from scratch. At the end of the play, The C.O. tells her that she’s free to leave, and Helena is understandably anxious. She doesn’t view freedom as an exciting new prospect; for her, it’s an abrupt divorce from the life she’s known and in which she’s become comfortable. The play calls into question our idea of freedom and what it means for the newly liberated—an enduring American debate, as we never seem to learn that it’s not always as joyful as one would hope.

A shift in the play occurs when No. 2, or Maima (Zainab Jah), finally appears in the women’s home. Slinging a gun and sporting shiny, sexy clothing, she reveals that she’s become a rebel fighter herself. She presents a contrast to the other wives and their more conservative garments. She offers The Girl an alternative to sitting in the home, waiting day to day for The C.O. to summon her. As the curtain opens on the second act, The Girl has been off fighting with Maima, and we see her now in a tank top and jeans—a stark divergence from the tattered skirt and Rugrats top she wore when she first appeared. The change is jarring, and it’s difficult to dissect The Girl’s spiritual change: from innocent rape victim to ruthless militant. There’s a lot of expository conversation between her and Maima to explain what’s occurred in the interim. The Girl’s subtle emotional shifts, so artfully expressed in the first section, are absent here. In a disturbing monologue, she reveals a horrific episode that implicates her in the gang rape, murder, and drowning of a girl even younger than she is. It’s a painful and affective speech, but not as poignant or well drawn as the subtle anger, pain, and alienation that she performs in the first act as she contends with the circumstances and systematic rape at her new home. In the final scene, she stands alone in front of the home, torn between the worlds of Maima and Rita. Regardless of the choice she makes, the play has brought her story out from the shadows.