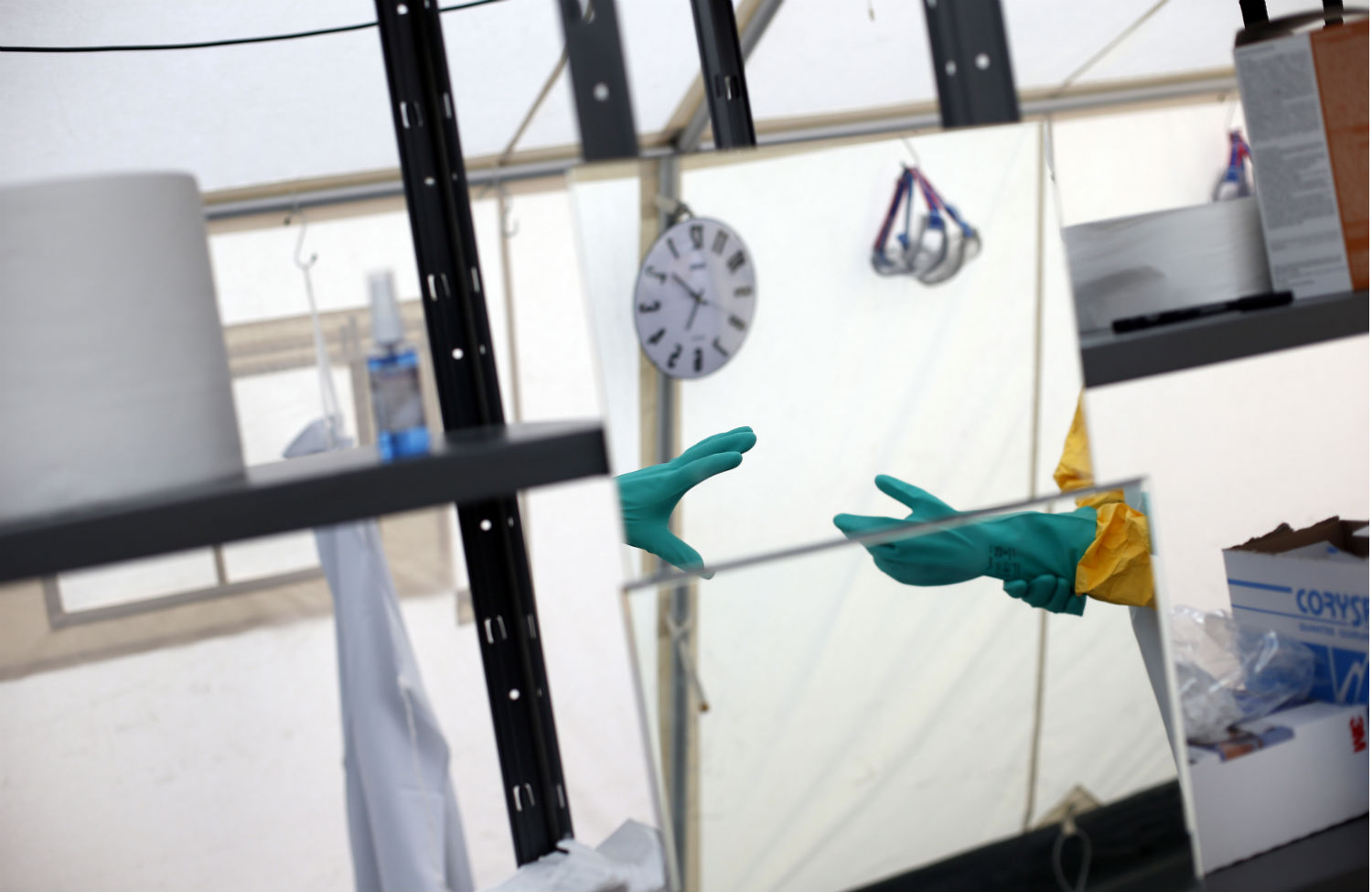 In early September, Ryan Boyko, a PhD student in public health at Yale, heard of an opportunity to travel to Liberia to help fight the spread of Ebola. Boyko had been to Africa eight times, including a trip to Liberia in 2012 to study the transmission of intestinal worms from domestic animals to children. The decision to go again was an easy one: his work could have a big impact, and the risk of infection, he surmised, was very low, especially given what he would be doing there.

Boyko is not a physician; he’s a data analyst. While in Liberia, he hooked up with Dr. Mosoka Fallah, a Harvard-trained epidemiologist, to improve Monrovia’s system for contact-tracing—the process by which people who have been exposed to an Ebola patient’s bodily fluids are identified and monitored. Fallah, who’d grown up in the city’s slums, had been working to rebuild the trust between a fearful public and an overwhelmed government by recruiting local leaders to educate their neighbors, spot outbreaks and target services. When Boyko and his colleagues arrived, Fallah’s contact-tracing was largely done by pen and paper and text messages. Some volunteers had to walk miles to submit their reports, and when the data did reach Fallah, it was sometimes so irregular that it was difficult to use. Boyko and his colleagues created a standardized form and recruited a tech company to develop an Android app to expedite and systematize the process. Boyko then helped build a cloud-based database and dashboard so that Fallah’s team could see, in real time, where new Ebola outbreaks were taking place.

A precise, cautious speaker, Boyko declined to speculate, when I talked with him over the phone, on what impact his work might have already had on slowing the epidemic. But suffice it to say that contact-tracing has been the key to containing the Ebola virus in all twenty-four previous outbreaks.

For these efforts, Boyko has, upon his return to the United States, been run through an infuriatingly irrational bureaucratic gantlet. On October 15, he developed a low-grade fever, and even though he’d had no contact with anyone who had Ebola symptoms, he immediately reported himself to the Yale–New Haven Hospital and was placed in isolation, as required by the Centers for Disease Control and Prevention (CDC) guidelines. Two separate Ebola tests quickly came back negative, and Boyko’s fever ended. Doctors at the hospital removed their protective gear, shook his hand and joked that Boyko was the only person in New Haven they could definitively say did not have Ebola. Even so, state officials insisted on placing him under a mandatory home quarantine. An armed police guard was stationed outside his apartment building, and his neighbors and landlord were told that he might have Ebola, leading to a rash of worrying e-mails. Daily routines like getting food, exercising or communicating with his colleagues have become onerous. Boyko was never told by officials exactly why he was being quarantined or when the quarantine would end. More important, he told me, the quarantine meant that his efforts to ramp up contact-tracing in Liberia were being impeded. “It slowed down the process a lot—I was still able to keep up the database and communicate with Liberia, but in terms of bringing in more people from our lab and being proactive, it became very difficult.”

Boyko is among several volunteers caught in a haphazard and scientifically indefensible quarantine policy, the best known of whom is nurse Kaci Hickox, who was first isolated by New Jersey governor Chris Christie in a hospital tent and then by Maine governor Paul LePage in her home. For daring to challenge her detention, Hickox has been vilified on social media as “a nasty self-promoting witch,” “this century’s Typhoid Mary” and “an arrogant beeotch.” “I hope she gets Ebola,” one commenter wrote.

With too few exceptions, the US response to West Africa’s Ebola epidemic has been an ugly and ignorant one. Educators and students have been removed from schools because they had traveled to or are from African countries that have had no Ebola cases and are thousands of miles away from the epidemic. Journalists who have covered the crisis—or who were merely from Africa, the continent—had speeches to journalism schools canceled. The political class has cynically joined in the scaremongering, calling for travel bans and increased border security and even going so far as to suggest that ISIS recruits could infect themselves with Ebola to commit bioterrorism. All of this is unseemly, paranoid, narcissistic, xenophobic, racist, politically opportunistic and medically illiterate. For the scapegoats, it is bewildering and enraging. But the stigmatization of healthcare workers like Hickox and other professionals like Boyko is the most obscene—and the most deadly.

Each of these people—as well as New York doctor Craig Spencer, the only returning healthcare worker to have been diagnosed with Ebola in the United States—has adhered scrupulously to the CDC’s guidelines, which first call for self-monitoring. From Spencer, we know that this works. We also know now that the mandatory quarantines have already deterred healthcare workers from volunteering abroad. Boyko told me that in the days since his release on October 30, three medical professionals have told him that they have withdrawn their applications to work in West Africa, and he himself is less likely to return. New York doctor Celine Gounder, who plans to volunteer in Liberia with Partners in Health, has also reported that doctors have been deterred by the quarantine and associated stigma.

Finally, we know that symptomatic treatment, primarily hydration, can dramatically improve the odds of surviving Ebola and that contact-tracing is instrumental in slowing its spread. In other words, we know that people like Hickox and Boyko are lifesavers—and by imposing needless quarantines that deter them from doing their important work, we are only ensuring that more people will die. For now, these victims are overwhelmingly African—but if we keep up the hysteria, Ebola may come home to roost.