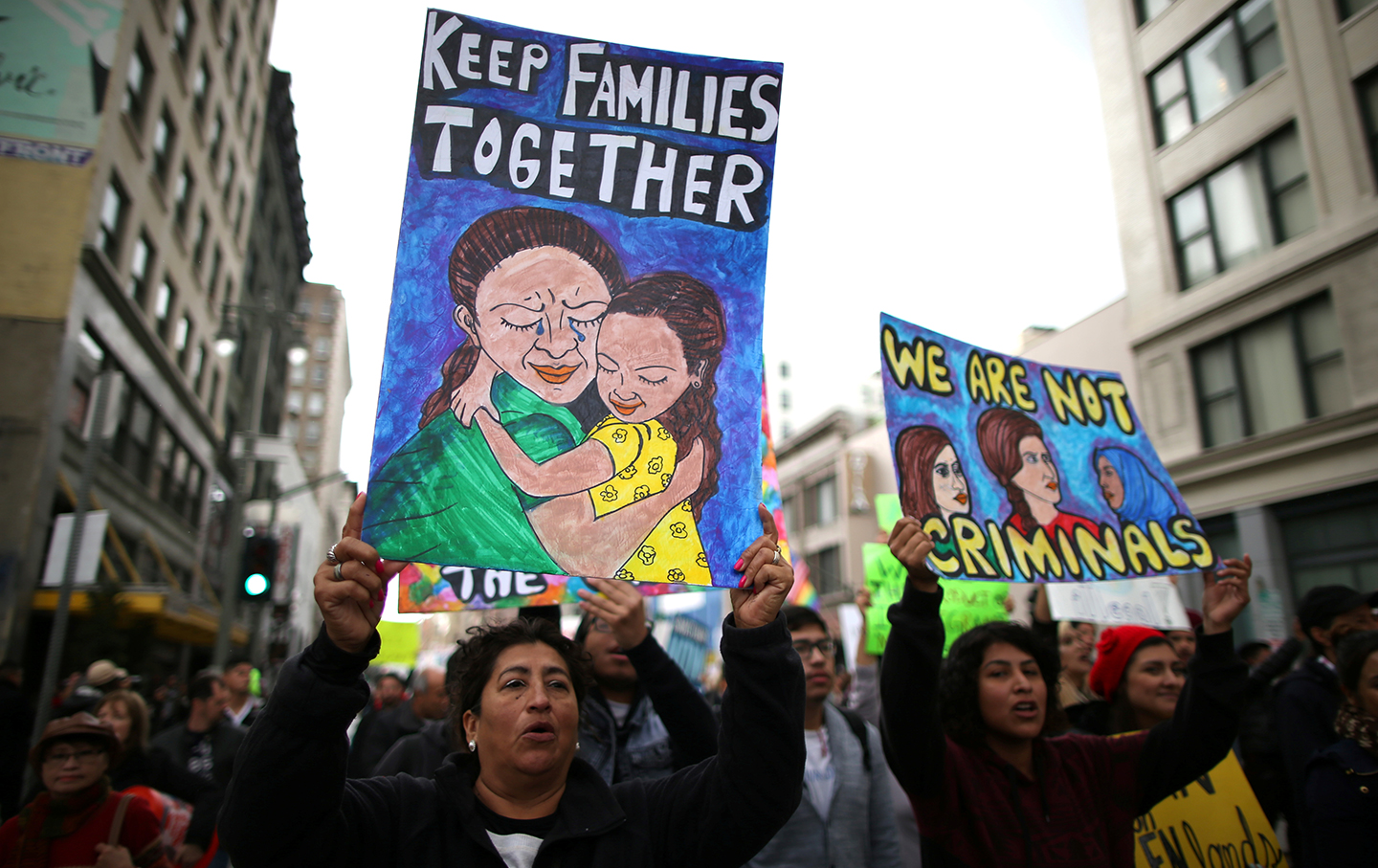 The past and future script of our long, absurdist national conversation about race is written on Daniel Ramirez Medina’s body.

Ramirez is the 23-year-old father who, as of this writing, still sits in detention, awaiting deportation. He was picked up by Immigration and Customs Enforcement agents during Donald Trump’s first wave of immigration raids. As a recipient of Deferred Action for Childhood Arrivals, or DACA, his arrest has become a focal point for concern over Trump’s promised  mass deportations.

The Trump administration seeks an ongoing debate not about US immigration policy, but about the criminality of people of color.

Dreamers, as DACA recipients are called, are the Talented Tenth of brown immigrants. Not only are they the best and the brightest, they are also the most blameless in their transgression against America’s  borders—or so goes the script written by the Obama administration and well-meaning immigration-rights advocates. Obama exempted the Dreamers from his record-setting mass deportations because they entered the country as children, and because they applied themselves in school and kept out of trouble while pursuing the American dream, despite their undocumented status. Roughly 750,000 of the estimated 11 million people living in the United States without permission have successfully proven themselves to fit these DACA qualifications and thus have been deemed worthy neighbors.

But for people of color in the United States, there has always been a fine line between hero and menace. So Daniel Ramirez was a Dreamer right up until February 10, at which point he became  a gangbanger.

On that morning, federal immigration agents—members of a Fugitive Operations Team—showed up at his home in a Seattle suburb. They were looking for his father, for whom they had a warrant and an existing deportation order. These are the facts of Ramirez’s detention on which everyone agrees.

The feds claim that Ramirez’s father answered the door and told them that both of his adult sons, who were in the apartment, were also in the country illegally. They say the father let them in. Ramirez’s lawyers insist that the agents barged in without permission and took Ramirez into custody despite his repeated statements that he had a work permit, granted under DACA.

The best way to undermine these xenophobes is to let go of our reliance on the “ideal migrant” altogether.

The feds say that Ramirez admitted to being in the Sureños gang, thereby disqualifying himself from Dreamer status, and point to a tattoo on his forearm as a gang insignia. Ramirez says he repeatedly insisted that he wasn’t a member of any gang and that, if he did have contact with any gang members, it would have been as a kid, when he “did nothing more than hang out with a few people who may have been Sureños.” As for his tattoo, which has the words “La Paz” and “B.C.S.” with a star, his lawyers say that it refers to his hometown of La Paz, Baja California Sur, in Mexico.

This dispute over a tattoo is painfully familiar—and a trap. As we’ve been reminded in case after case of state violence against black and brown people, Ramirez’s criminality lies in the eye of the beholder. His lawyers may be able to disprove ICE’s assertions in court. But immigration advocates can marshal no facts to exonerate the millions of people like Ramirez in the eyes of Trump and his political strategists. That’s because the Trump administration isn’t actually debating immigration policy; it seeks an ongoing debate about the criminality of people of color, a constant parsing of which among us are rapists, drug dealers, and terrorists, and which are the “great people” that Trump allows do exist. If we accept these terms of debate, we accept our inhumanity, which is the point.

Trump’s executive orders on national security and urban crime have been lampooned as hapless, if dangerous, public policy. They were sloppily written and easily challenged in court, at least thus far. But the orders were not crafted for lawyers and policy-makers; they were markers in a culture war.

Consider Trump’s establishment of an “Office for Victims of Crimes Committed by Removable Aliens.” The actual function of the office is less important than its name and its planned weekly publication of crimes committed by immigrants in sanctuary cities. The Trump administration is staffed by people—Jeff Sessions, John Kelly, Steve Bannon, the president  himself—who have been waging a cultural battle against the idea of the hero immigrant for years, choosing instead to emphasize immigrant criminality. The best way to undermine these xenophobes is to let go of our reliance on the “ideal migrant” altogether.

Thanu Yakupitiyage, of the New York Immigration Coalition, says too many advocates accepted the hero-or-menace framing of the Obama years. You can’t have one concept without the other, and she says there’s a growing consensus about that fact in the movement. “People are realizing that it actually doesn’t matter… what you have done or not done—you are being pushed aside as ‘other,’” she told me.

I don’t know Daniel Ramirez, but I suspect he’s like every other human being I’ve met: both a hero and a menace, depending on which side of the bed he woke up on that day. Maybe he was in a gang, maybe he wasn’t. But if we’re ever to arrive at a humane and productive immigration system, we will have to accept that he deserves due process and freedom from harassment regardless.

In the wake of Trayvon Martin’s murder, three black women began to assert that black lives matter, a statement that carried no qualifiers. It’s not educated black lives or employed black lives or black lives with no criminal record that matter—just black lives. May the Trump era be the time when we will finally begin to say the same about immigrants.