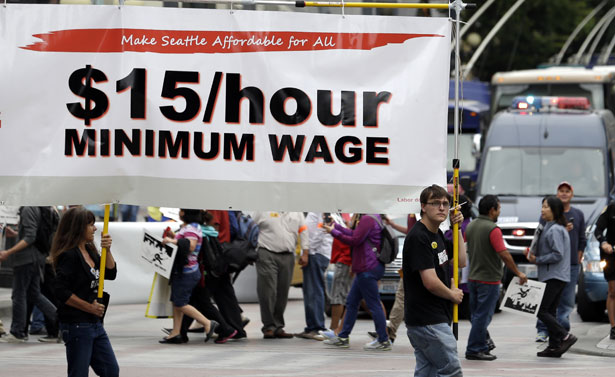 The dramatic progress of the movement to make the minimum wage a living wage was highlighted on May Day when Seattle Mayor Ed Murray unveiled a plan to double the base pay for workers over the coming decade.

A year ago, President Obama and others saw raising the federal minimum wage from $7.25 an hour to $9 an hour as the great leap forward.

This week, the newly elected mayor of one of America’s largest and most prosperous cities proposed a plan that would, in a series of steps over the coming decade, take the base wage as high as $18 an hour. Something big is happening; the activist coalition Working Washington hailed the announcement of the mayor’s plan as “an incredible accomplishment.” Recalling “strikes, marches, boycotts and other mobilizations” by fast-food workers in Seattle that raised the call for a $15-an-hour basic wage, the labor-backed group noted that, “Less than a year later, we are on the verge of achieving a $15 minimum wage that ensures every worker in Seattle can support themselves, afford the basics, and contribute to the economy.”

Even as they celebrate the progress that has been made, however, Seattle City Council member Kshama Sawant and others say they hope to improve upon the mayor’s plan. The councilmember says she’ll be working in coming weeks for changes that would speed up the implementation of wage increases, eliminate loopholes for big businesses and protect the interests of workers who rely on tips. “Our work is far from done,” says Sawant, who has helped to organize a grassroots 15 Now movement for a rapid increase in wages. “This is a historic moment to recognize the power of grassroots organizing,” she said after the mayor’s plan was announced. “It is a call to action.”

Seattle and the state of Washington have histories of recognizing the need to raise wages so that working people will not face the reality of putting in a forty-hour week while remaining stuck in poverty. The current minimum wage for Washington workers is $9.32 an hour, the highest state rate in the nation. But the basic premises of the debate were jolted last fall by the election to the city council of Sawant, an Occupy activist and Socialist Alternative candidate who made advocacy for a $15 wage central to her bid. At the same time, voters in the nearby city of Sea-Tac backed a $15-an-hour proposal.

The Seattle election results shook that city and the nation into a new way of thinking about the minimum-wage debate. The Fight for $15 movement of fast-food workers, which Sawant and others credit for laying the groundwork for wage-hike campaigns in Seattle and cities across the country, has been strengthened by the fact that its proposals were being embraced by voters and policymakers. Activists nationwide are ramping up demands for wage hikes that will address poverty and income inequality. And instead of proposing only incremental changes that might be grudgingly accepted by business interests and conservative politicians, progressive Democrats have begun to notice the polling data that shows broad support for major wage increases.

In his 2014 State of the Union address, President Obama embraced a proposal by Iowa Senator Tom Harkin and California Congressman George Miller for a $10.10 hourly wage, and that popular position has become a baseline standard for progressives seeking state and federal posts in the 2014 election cycle.

But in expensive cities like Seattle, $10.10 an hour can still be a poverty wage. So, according to The Seattle Times, “Murray’s plan calls for the city’s minimum wage to climb to $15 an hour, phased in over three to seven years depending on the size of business and whether workers receive tips or benefits in addition to salary. After that, the wage would be tied to the Consumer Price Index, with estimates showing it rising above $18 an hour by 2025.”

Outlined with the aid of a large “Income Inequality Advisory Committee,” and assembled after weeks of negotiations involving council members, community activists, labor and business, the Murray plan comes with significant support. And it is moving forward rapidly. After setting a May 5 session to begin reviewing the proposal, Seattle Councilmember Sally J. Clark, who chairs the council’s Select Committee on the Minimum Wage and Income Inequality, said,“It’s my hope we can launch quickly into our review and decision-making.”

Moving to double the minimum wage may sound bold, and there will still be plenty of naysaying in Seattle and nationally. But we’ve been here before. President Harry Truman, fresh from his 1948 re-election on a platform that promised to renew the liberalism of the New Deal era, proposed an across-the-board increase in the federal minimum wage from 40 cents an hour to 75 cents an hour. Truman also proposed raising the base wage to $1 per hour in some industries. Truman adviser Clark Clifford said the president wanted “to strike a new high ground.”

Truman did not get everything he asked for from a Congress where conservative Republicans and Southern Democrats resisted progressive legislation. But by the fall of 1949, the president was signing a 75-cents-an-hour minimum wage into law.

What’s significant is that Truman nearly doubled the wage in a year. Seattle’s 15 Now activists are concerned that Murray’s plan, while generally headed in the right direction, drags the process out. They’ve been petitioning for a citywide vote on raising the base wage to $15 an hour by January 1, 2015.

“The fact that the City Council of a major city in the US will discuss in the coming weeks raising the minimum wage to $15 is a testament to how working people can push back against the status quo of poverty, inequality, and injustice. The movement, starting with fast food workers nationwide, and pushed forward by SeaTac and 15 Now, is forcing business and the political establishment to accept raising our wages,” says Sawant. “The proposal that has been announced is a result of the pressure from this movement. Unfortunately, it also reflects the attempt of business to water down what the working people of Seattle want. While business has lost the public battle on 15, they were given a seat at the table to pursue their wish list, while low-wage workers were left out.”

Sawant says she will work for “a strong $15” with grassroots organizing and in council debates on the plan advanced by Mayor Murray.

In particular, she seeks to narrow the timeline for implementation of wage increases by large businesses such as McDonald’s and Starbucks.

“Every year of phase-in is another year that a worker has to live in poverty,” the councilmember explained. “So we have to keep fighting. We will keep building the pressure from below.”

Specifically, Sawant says, “We still need a backup option should the city council fail to pass 15, which is why we need to keep up the pressure through signature collection [for the initiative proposal].”