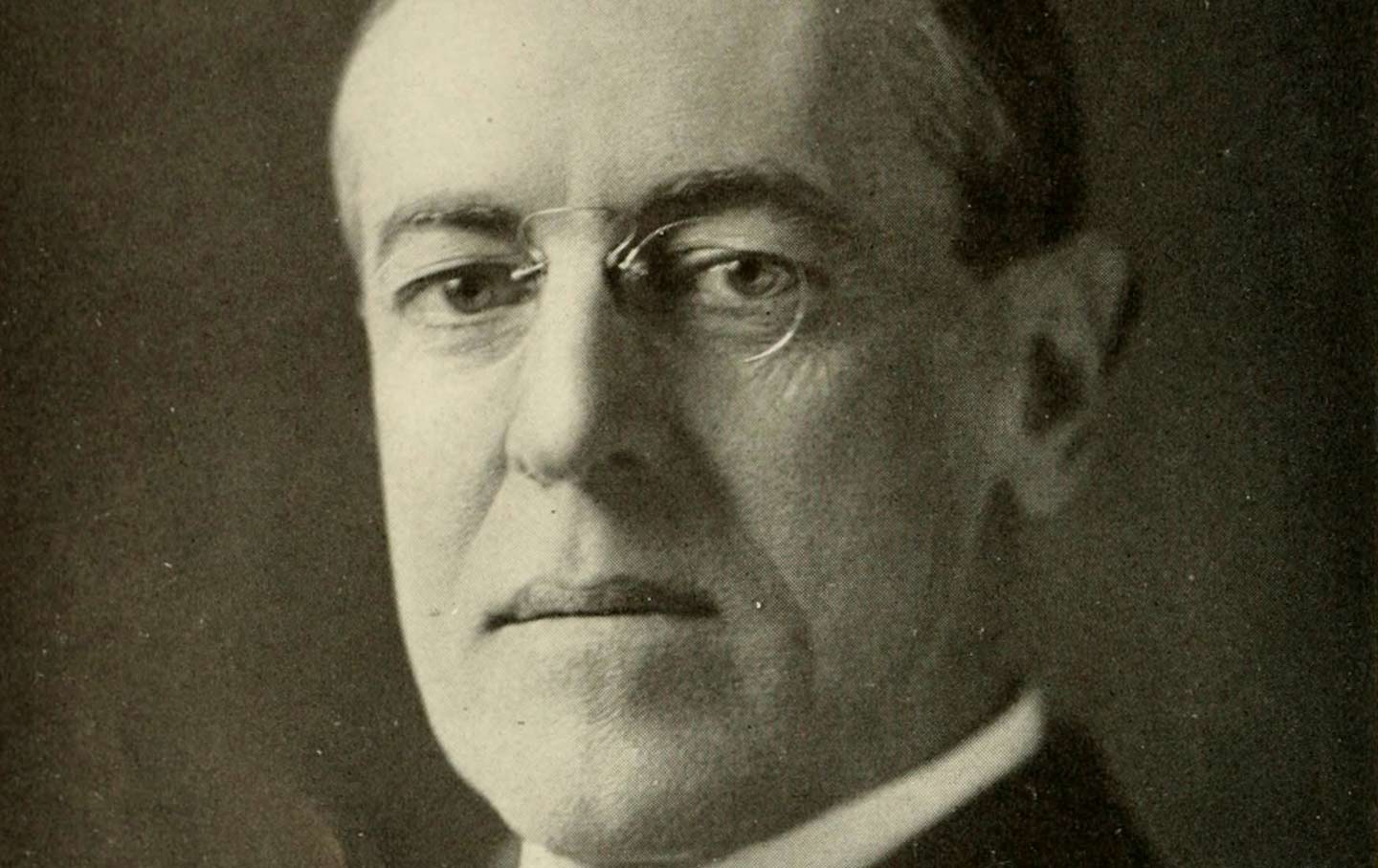 In the wake of Princeton students’ protest over the name of the Woodrow Wilson School of Public and International Affairs, there have been a few attempts by historians to defend Wilson, most of which has been pretty weak tea. They focus overwhelmingly on his domestic policies and ignore the link between Wilson’s white supremacy and his militarism abroad. But when it comes to racism and war, the domestic can’t be separated from the overseas. As I wrote a few months back, war—starting with the post–Civil War eliminationist campaign against Native Americans and continuing on through 1898 and World War I—was key to the rehabilitation of the Confederate Flag and the North’s reconciliation with the South. And Woodrow Wilson played a key role:

In June 1916, as Woodrow Wilson began to push through Congress a remarkable set of laws militarizing the country, including the expansion of the Army and National Guard (and an authorization to place the former under federal authority), the construction of nitrate plants for munitions production, and the funding of military research and development, Confederate veterans descended on Washington, DC, to show their support for the coming war in Europe.

“About 10,000 men wearing the gray, escorted by several thousand who wore the blue, marched along Pennsylvania Avenue and were reviewed by the President,” one observer reported. “In the line were many young soldiers now serving in the regular army, grandsons of those who fought for the Confederacy and of those who fought for the Union. The Stars and Bars of the Confederacy were proudly borne at the head of the procession.… As the long line passed the reviewing stand the old men in gray offered their services in the present war. ‘We will go to France or anywhere you want to send us!’ they shouted to the president.”

Wilson won reelection in 1916, his campaign running on the slogan, “He kept us out of war.” But he could then betray his anti-war supporters knowing that a rising political coalition—made up, in part, of men looking to redeem a lost war by finding new wars to fight—had his back.

Decades before President Richard Nixon bet his reelection on winning the Dixiecrat vote, Wilson worked out his own Southern Strategy. Even as he was moving the nation to war, Wilson re-segregated Washington and purged African-Americans from federal jobs. And it was Wilson who started the presidential tradition of laying a Memorial Day wreath at Arlington Cemetery’s Confederate War Memorial.

In 1916, he turned that event into a war rally. “America is roused,” Wilson said to a large gathering of Confederate veterans, “roused to a self-consciousness she has not had in a generation. And this spirit is going out conquering and to conquer until, it may be, in the Providence of God, a new light is lifted up in America which shall throw the rays of liberty and justice far abroad upon every sea, and even upon the lands which now wallow in darkness and refuse to see the light.”

What alchemy it was—with Wilson conscripting the Confederate cause into his brand of arrogant, martial universalism. The conflict in Europe, Wilson said at the same wreath-laying event a year later (less then two months after the United States had declared war on Germany), offered a chance “to vindicate the things which we have professed” and to “show the world” that America “was born to serve mankind.”

American history was fast turning into an endless parade of war…

Also central to this process was Wilson’s invasion and occupation of Haiti, as my colleague Nathan Connolly points out. Just months after he screened, in February 1915, D.W. Griffith’s racist Birth of Nation in the White House, and even as he was re-segregating the federal bureaucracy, Wilson sent troops into Haiti. The occupation and counterinsurgency lasted nearly two decades, until 1934. The sons and grandsons of the Confederacy could prove their loyalty to the United States while carrying out torture and playing games such as “hit the nigger and get a cigar.”

Littleton Waller, for instance, was born in Virginia and fought in the Philippines in the War of 1898. According to the historian Laurent Dubois, Waller was a “descendant of a prominent family of slaver owners; in fact, some of his ancestors had been killed in an 1831 rebellion led by Nat Turner, who was partly inspired by the example of the Haitian Revolution.” So having been sent by Woodrow Wilson to impose order on Haiti, he knew what to do: “I know the nigger and how to handle him,” he wrote.

It’s nearly impossible to get an accurate count of how many Haitians US troops killed over the course of these 19 years. Edwidge Danticat, who wrote this great essay in The New Yorker on the occupation and whose grandfather fought the US Marines, says 19,000. (Also see this note, from the website The Public Archive: “Between 1918 and 1932 The Nation carried more than fifty articles and editorials on conditions in Haiti. Evidence of torture and massacres uncovered by The Nation’s 1920 inquiry into the American occupation of Haiti led to a congressional investigation and helped bring the island independence in 1934.”)

Defenders of Wilson are correct to beg for context when considering his legacy. But it is they who ignore the context, the role Wilson played in using war, including Haiti’s racist counterinsurgency, to nationalize white supremacy, militarism, and Christian evangelism.

Caveat: But see Jim Livingston, who is never weak tea!

Endnote: The best take, still, on how Wilson’s liberalism created a perpetual motion machine of endless interventionism is to be found in the historian William Appleman Williams’s The Tragedy of American Diplomacy, published in 1959. Williams doesn’t frame his analysis specifically around race and racism, but it isn’t hard to see the relevance: “American liberalism was a philosophy derived from the axiom and belief that a harmony of interests actually existed and could be secured.… Founded on a simple (if not crude) concept of natural law, its theory was as neat a circle as ever was drawn freehand…. [Government] intervention in the social process was necessary and justified only to remove the obstacles placed there by others.… Though negative in form, such intervention became positive in practice, for the theory defined every opponent of the United States as being misadvised about the nature of the world. In a way that John Locke tended to do in his own philosophical writings, which provided the master text for liberalism, Americans became very prone to define their rivals as unnatural men. They were thus beyond the pale and almost, if not wholly, beyond redemption [emphasis added]. Reinforced by an expansionist, or frontier, interpretation of history that explained nationalistic expansion as a necessary and justified part of natural law…. the final result was that domestic problems became international problems…. The outlook was literally an all-encompassing conception of the world. Americans could not only conquer nature, but they could put their self-interest to work to produce the well-being and the harmony of the world. Their theory not only held that they could do these things; it asserted the natural necessity of action. Any other course violated natural law and thus subverted the harmony of interests…. They were neither hypocrites nor sophists; they simply accepted and believed the idea that American expansion naturally improved the world—as well as being necessary for their own democracy and prosperity.”