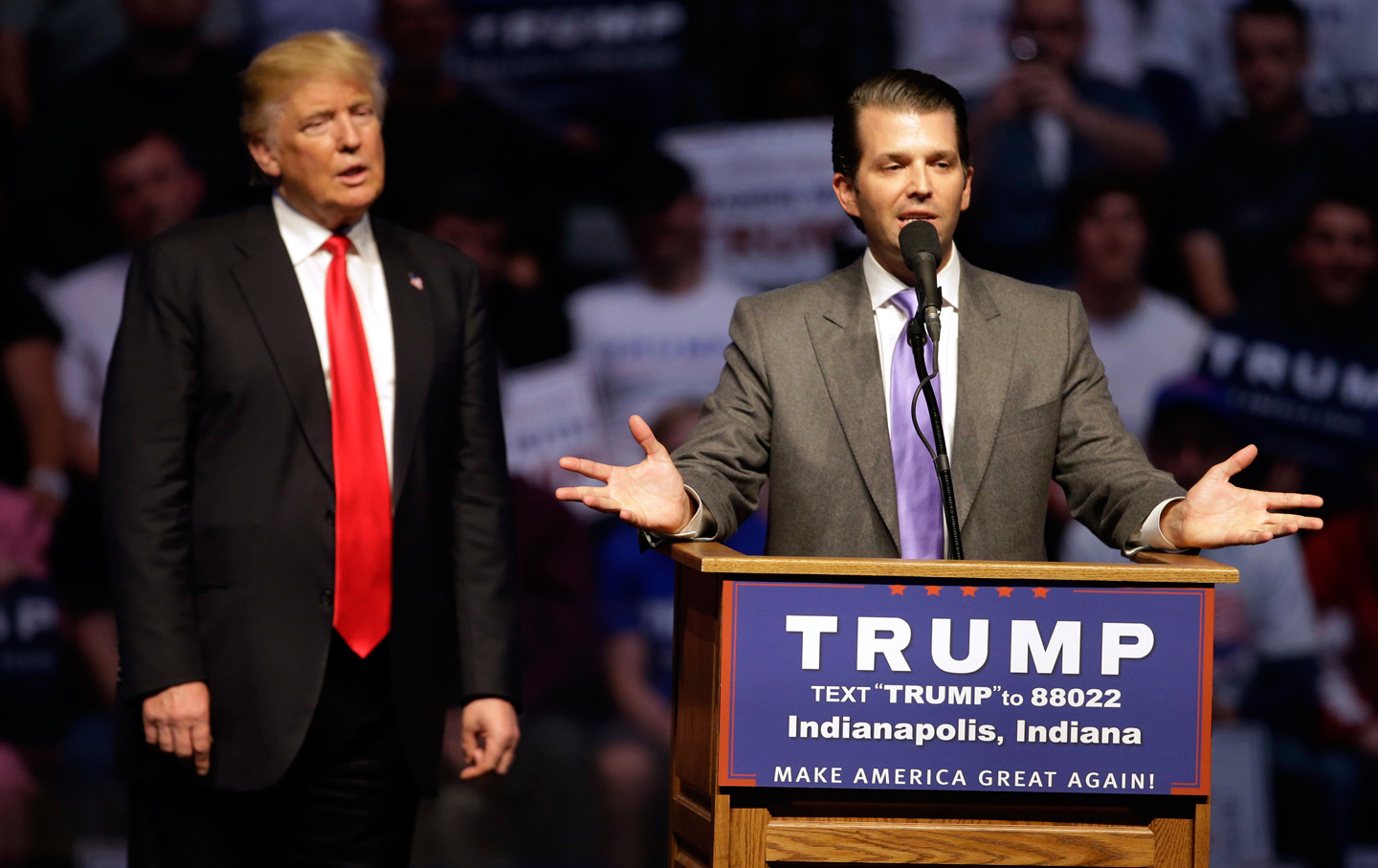 Did Donald Trump Jr. confess to a crime this afternoon? And if so, does he even know it?

Since Saturday, Trump Jr. has been windmilling wildly, trying to defend himself against a series of New York Times stories about a June 2016 meeting between young Donald, his father’s campaign manager Paul Manafort, brother-in-law Jared Kushner (now a senior Trump adviser), and a Russian lawyer named Natalia Veselnitskaya. At every step, he’s made things worse for himself, and perhaps his father. But on Monday he may have delivered the knockout punch—against himself.

Just as the Times published a shocking new piece detailing e-mail messages sent to him by Rob Goldstone, a music publicist, promising “very high level and sensitive information” about Hillary Clinton as “part of Russia and its government’s support for Mr. Trump,” Donald Jr. released the entire e-mail chain himself, on Twitter. In it, he appears to be committing the crime of accepting campaign help from a foreign government. Gleefully.

“If it’s what you say I love it,” Trump quickly replied to Goldstone, adding, “especially later in the summer,” in what seems to be a reference to when the campaign might deploy such damaging information against its opponent. Goldstone, who represents Russian singer Emin Agalarov, the son of Aras Agalarov, a real-estate tycoon who is a crony of both Trump Sr. and Vladimir Putin, told Trump Jr. that both Agalarovs were urging the meeting with a “Russian government attorney,” and he added, tantalizingly, “I can also send this info to your father via Rhona [Trump’s longtime assistant Rhona Graff] but it is ultrasensitive so wanted to send to you first.”

The subsequent e-mails show Donald Jr. quickly pulling together a meeting with Manafort and Kushner. When the meeting time got changed, Trump e-mailed the thread to both Manafort and Kushner, retaining the subject line: “Russia-Clinton: private and confidential.” So much for earlier Trump claims that the men had no idea what they were talking about. After three days of increasingly worse news about Donald Jr., Donald Sr. finally issued a statement: “My son is a high-quality person and I applaud his transparency.” Then he coldly referred questions to Donald Jr.’s lawyers.

Both Trump and Goldstone told the Times Tuesday that the meeting withVeselnitskaya was a bust. She had no information about Clinton, they claim, and merely delivered an “inane” statement on the Magnitsky Act and Russia’s reactive adoption restrictions. For her part, Veselnitskaya admitted to NBC on Tuesday that the Trump team indeed sought damning information about Clinton, but she claims she didn’t have it, and merely wanted to talk Russia policy. She also insists she has no ties to the Kremlin, which seems untrue, as she is one of the most prominent Russian lobbyists in attempts to repeal the Putin-loathed Magnitsky Act, named for a Russian accountant who discovered corrupt financial dealings among Putin-connected Russian oligarchs, and died, allegedly of a beating by guards, in prison.

It should also be noted: There is no reason to believe either Veselnitskaya’s or Trump and Goldstone’s insistence that the Russian attorney provided no damaging information about Clinton obtained by the Kremlin. All three have been proven to be inveterate dissemblers.

We must also note that none of this confirms the story told by the four major US intelligence agencies—that the Russian government directed the hacking of Democratic Party e-mail accounts to hurt Clinton. The “incriminating” information that Goldstone promised had to do with Russian officials contributing, illegally, to Clinton’s campaign—information that never apparently materialized. So far, none of the conversations revealed by Trump Jr. or the Times has involved reports that the Russians hacked into Democratic officials’ e-mail accounts and/or were offering to disseminate those e-mails. There will likely be many more details necessary to substantiate any kind of legal or political case against Trump himself.

Some experts say Trump Jr. committed a crime, violating a law prohibiting foreign nationals from providing, and Americans from receiving, “anything of value.” Election-law expert Rick Hasen concludes “there’s a lot for prosecutors to sink their teeth into. Pretty close to the smoking gun people were looking for.” Pretty close—but not quite. It’s also not clear who would charge Trump with this potential violation of the law—or what penalty he would pay.

There are many strands to follow here. The very same day as young Donald and top Trump officials took the meeting with Veselnitskaya, the candidate himself tweeted, for the first time, about the 33,000 e-mails that Clinton declared personal and didn’t provide to FBI investigators. The Wall Street Journal has reported on the clandestine pro-Trump efforts of Peter W. Smith, a wealthy conservative lawyer who’s been a GOP gremlin since the early Clinton administration. Smith tried to confirm reports that the Russians indeed obtained those Clinton e-mails, and to retrieve them. It’s possible that Trumps Jr. and Sr. had an early heads-up on that rumor. (Smith, 81, died two weeks after talking to the Wall Street Journal.)

So many things are possible. Donald Jr. has changed his story about the meeting with Veselnitskaya three times, at first saying it was about adoptions, then admitting he was hoping for Clinton dirt, and on Tuesday coming semi-clean (at least via an email thread) about the whole tawdry and possibly illegal search for Russian dirt on the former secretary of state. Meanwhile,  Jared Kushner has had to amend his government security forms three times, to disclose new information about meetings with Russians that he had forgotten, including this one. The Times stories have benefited from cooperation from “White House advisers”—of which Kushner is one—which raises the question of whether someone in Trump’s inner circle is out to get his older son. There may be more changes to come in the storyline from Trump Jr. and Kushner. If the Times has this kind of information, I would imagine that special counsel Robert Mueller has much more. We still don’t know what the outcome will be.

But the Trump family’s repeated claims to know nothing about Russian meddling in the election, and Jared Kushner’s (thrice-revised) insistence he had no meetings with any Russians, at all, have been exposed as lies. Republicans still don’t care. Senator Ted Cruz called in a “nothing-burger” on Tuesday afternoon, a talking point he borrowed from Hungarian Nazi-admirer Sebastian Gorka, who said the same thing today (before Trump Jr. released his e-mails). It seems like every time the GOP goes out on a limb to defend the Trump team, the Trump team returns the favor by leaking or confirming more evidence to the contrary.

Listen to Joan Walsh on the Start Making Sense podcast.