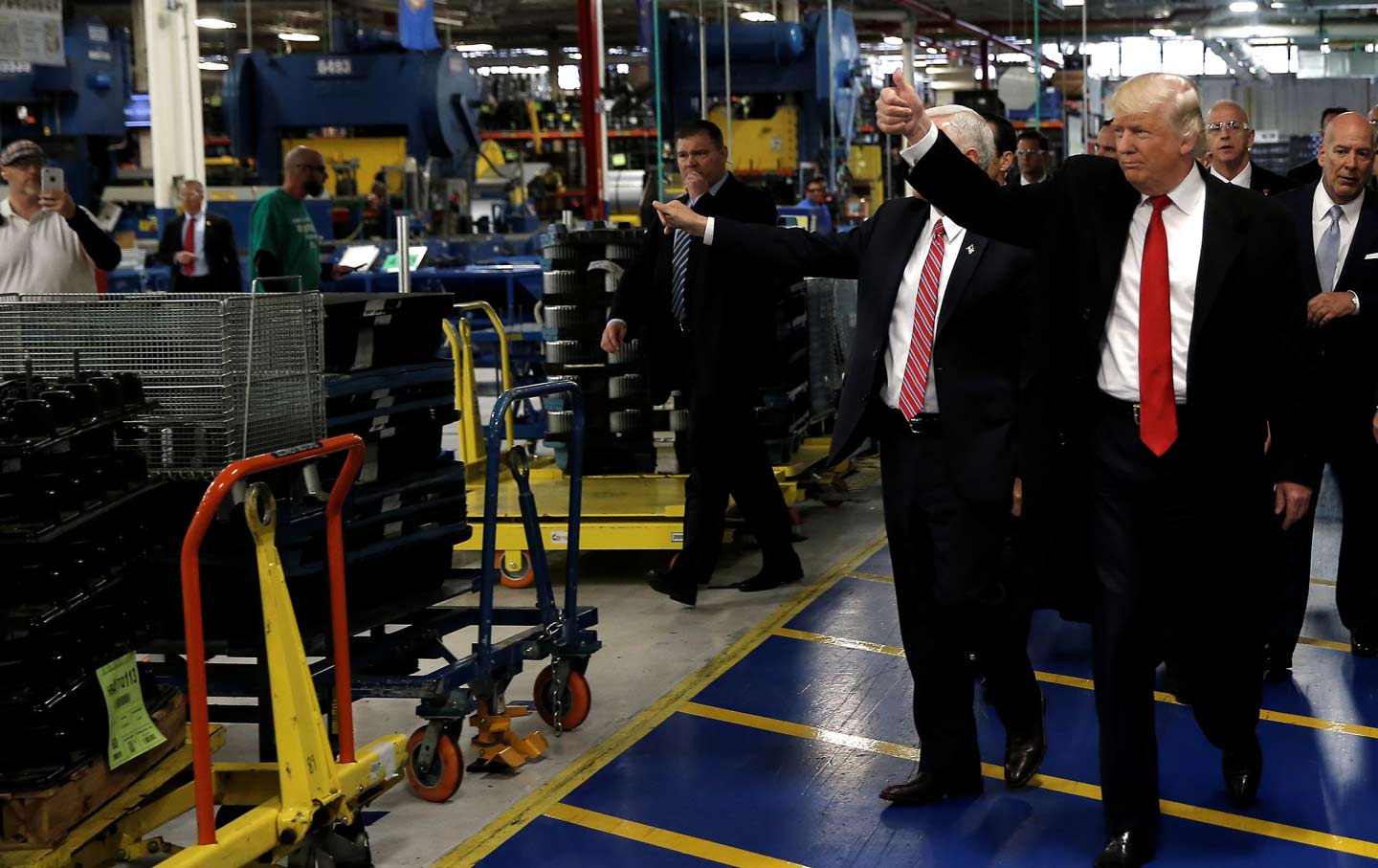 But look beyond the shiny objects, the bread and circus that enthuse base supporters and infuriate opponents. The truth is that Donald Trump, if you cut through this clutter, will tell you exactly who he is. And he’s a bog-standard corporate Republican.

Listen to the other bog-standard corporate Republican who introduced him last week at a Carrier plant in Indiana, Vice President–elect Mike Pence. “He picked up the phone,” Pence said, referring to negotiations with Carrier’s parent company that ultimately led to it maintaining less than half its presence in the state, temporarily. “He talked about our plans, our plans to make America more competitive, to reduce taxes, to roll back regulations, to put American jobs and American workers first again.”

Notice that you did not hear about tariffs, or threats to cancel federal contracts. Donald Trump has said no company will outsource jobs from the United States without consequences. But here are the consequences, from Trump’s mouth later at that Carrier event: “We’re lowering our business tax from 35 percent, hopefully down to 15 percent…. The other thing we’re doing is regulations.”

Look out corporations, Donald Trump won’t rest until you pay less on your earnings and get a free pass to pollute and endanger your workers!

In this, Trump has been remarkably consistent. Yesterday on The Today Show, responding to his tweet about Boeing’s cost overruns on a replacement Air Force One, Trump changed the subject: “And by the way, we’re lowering taxes in this country. We’re getting rid of 90 percent, maybe 85 percent of the regulations which are stifling business. Boeing is going to be a tremendous beneficiary of that.”

Cutting taxes, cutting regulations. That’s a policy agenda that would be comfortable in a George W. Bush State of the Union address, or one by Reagan for that matter. For all the appearances of novelty, it’s quite banal. Donald Trump is another handmaiden to capital, following other handmaidens to capital in his wake.

The idea that corporations are unnerved by the uncertainty is a head fake. It constructs a fake image of Trump as a populist warrior rather than a corporate hack, something CEOs are pleased to have out there to hide their giddiness at the coming bounty. Trump said it himself on Today: “They’re so unnerved that the stock market is at an all-time record since I’ve been elected.” The sustained market reaction is a far better indicator of the corporate mood than Boeing’s short-term drop after a tweet. By the way, Boeing stock has jumped since that incident to a 52-week high.

Incidentally, Trump’s two-issue agenda matches Paul Ryan’s, who has consistently put cutting regulations and taxes atop his legislative priorities. They happen to be the two easiest pieces to get through Congress, in part because of the vote threshold, in part because the entire party agrees on them.

Using the Congressional Review Act, Republicans can nullify any Obama “midnight regulations” finalized since the end of May (that’s some long midnight). They can merely pass a resolution of disapproval by majority vote, sidestepping the filibuster. With other rules, Trump’s executive agencies can simply repeal by neglect, through hiring regulators who choose not to regulate. Debra Wong Yang, an acknowledged cover-up artist who helped whitewash Chris Christie’s Bridgegate liability, could chair the Securities and Exchange Commission. Scott Pruitt, an avowed enemy of the EPA, will run the EPA. Andy Puzder, a critic of the minimum wage and most other business regulations, will head up the Labor Department. It will take some time to actually deregulate under standard administrative procedures, but it takes no time at all to not enforce them.

The tax piece will come in a 2018 budget-reconciliation bill, also requiring just a 50-vote hurdle, preventing Senate Democrats from stopping it. “It’s an abuse of reconciliation,” said Oregon Senator Jeff Merkley in an interview. “The concept was you can get a simple majority if you were closing the budget gap. But if you’re doing things that increase the deficit, you’re utilizing it to do not at all what it was intended for.” Nevertheless, by putting a 10-year sunset on any package so it doesn’t reduce revenues outside the budget window, Trump and the Republicans can cut corporate taxes (and individual ones) by a majority vote, and they’d be thrilled to do so.

Making the moving parts in a tax bill takes work—Trump wants a 15 percent corporate rate, while House and Senate Republicans prefer 20 percent, and Koch Industries is already trying to preserve the ability to hide offshore earnings from taxation. But Trump and the congressional leadership aren’t that far apart. Over half of these tax cuts go to millionaires; they are rooted in a philosophy of trickle-down economics that has proven a disaster. But while they differ from Trump’s populist rhetoric during the campaign, that’s not going to stop capital from grabbing their reward.

Notice that I did not include Obamacare repeal in this agenda. Trump has been fairly tight-lipped about health care since the election, while Republicans in Congress have been at each other’s throats. For now, a repeal bill, which will be accomplished under a 2017 budget reconciliation, will kick off the next congressional session. But leadership wants a three-year delay on implementation, pushing the damage of kicking nearly 30 million people off their insurance until after the 2018 midterms. This has the far-right House Freedom Caucus apoplectic, vowing to resist a long-term phase-out. Meanwhile, Senate majority leader Mitch McConnell wants Democratic buy-in, which isn’t coming. And the hospital and insurance industries have warned of massive losses from any disruption, essentially seeking politically unpalatable cash payoffs. Some Republicans have publicly admitted that the way forward is unsettled.

That’s before you even get to Medicare privatization, where Ryan is waffling, Senate Republicans are balking and Democrats are licking their chops in anticipation of even the attempt. The dawning realization that health care sits right next to Social Security on the third rail of American politics makes overhaul a true challenge.

So if you set that brewing fight aside, the only actions left that will surely be taken are on taxes and regulations. We’ve seen this movie before, most acutely in the disastrous presidency of George W. Bush. Trump’s headed down the same road because no other ideas will be available to harness the uneasy Republican coalition, which has already brayed at tariffs or infrastructure spending or even the ever-changing stances on immigration. Faced with no alternatives, supply-side economics rears its ugly head.

Trump’s showmanship has dominated political chatter. But strip away the boasts and provocations and you have a tax-cutting, deregulating friend to the CEO. “It just seems to me that he’s putting a traditional Republican administration together,” Senator Roger Wicker (R-MS) told The Washington Post. That’s correct, and it shouldn’t be overlooked.