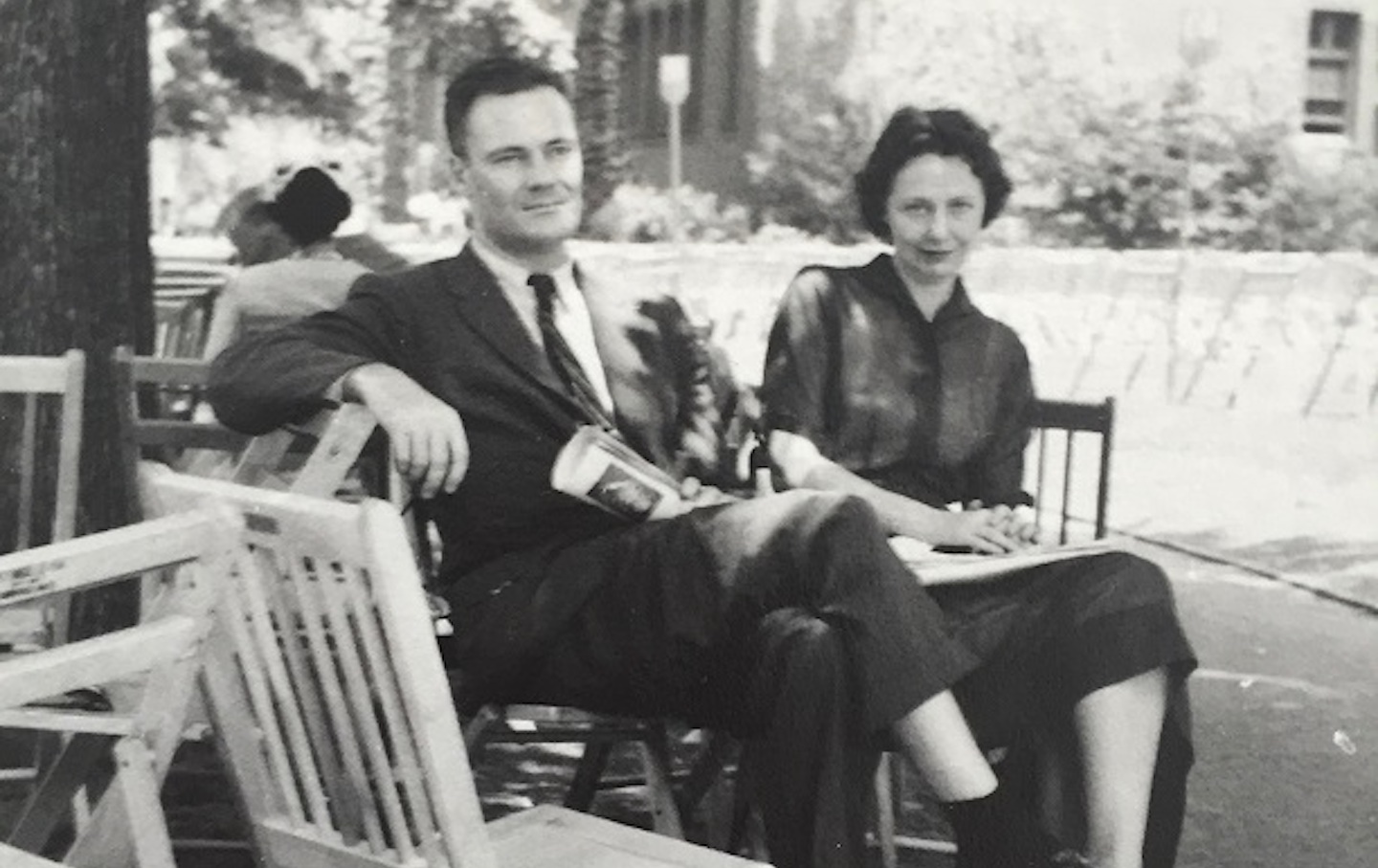 The American literary critic and novelist Elizabeth Hardwick was a great unheralded theorist of letter writing. The letters of her subjects often appear in her critical essays as little glimmerings of inadvertent disclosure. “In letters we can reform without practice,” she wrote in a 1953 piece for The New York Review of Books, “beg without humiliation, snip and shape embarrassing experiences to the measure of our own desires.” For Hardwick, letters, at their best, represented acts of benevolent self-creation, paper terrariums in which familiar forms—weather, people, landscapes, books—were beautifully or provocatively arranged. “What [letters] most often show,” she wrote, “is that people do not live their biographies.”

The Dolphin Letters, 1970-1979: Elizabeth Hardwick, Robert Lowell, and Their Circle

The Dolphin Letters, 1970–1979—which collects the correspondence between Hardwick and her husband, the poet Robert Lowell, during the last seven years of his life and her letters to friends in the aftermath of his death—complicates this assertion. The book’s title refers to The Dolphin, Lowell’s controversial collection of sonnets written during the couple’s estrangement, in which he used lines from Hardwick’s aggrieved letters as poetic material. The reader will discover many things concealed within their epistolary record: a chronicle of betrayal that consistently defies expectations with regard to revenge or comeuppance, a mapping of marriage’s creases and alluvial valleys, a record of almost telegraphic communication between writers of vast and appealing gifts, and a study of how creative work reconstitutes the raw materials of life. Buoyed by the dialectical elegance of its form, The Dolphin Letters is an extraordinary philosophical inquiry into what is permissible in a work of art.

It begins in medias res, with Hardwick and the couple’s daughter, Harriet Lowell, having returned to New York City after a family trip to Italy in the spring of 1970. Robert Lowell remained abroad, en route to a fellowship at Oxford, where he would meet the journalist Caroline Blackwood at a publishing party, then fall in love with her. (A serial philanderer, he eventually married Blackwood.) The first few months’ worth of letters, some 60 pages all told, possess an almost lurid, voyeuristic quality, the reader knowing what Hardwick does not. The correspondence is initially rather one-sided—“one does mind,” she wrote, “does feel cut off and strange”—until, finally, the fateful telegram from Lowell arrives, terse, remote, almost vacant: “Personal difficulties make trip to New York impossible right away.” (He was hospitalized for mania two weeks later.) The fallout is captured in real time in the hundreds of letters that follow—Hardwick’s bitter discovery and recrimination, Lowell’s self-serving evasiveness, their separation and divorce, the unexpected period of creative output that followed, the incredible damage wrought by The Dolphin, and their eventual unlikely reconciliation.

The Dolphin possesses an equivocal legacy. It is perhaps the most infamous book in modern American poetry. Lowell’s great transgression was one of unchecked license, the siphoning of Hardwick’s heat and pain for the exigencies of his art. The resultant sonnets vacillate among love, confusion, grief, and self-accusation. (“One man, two women” was his more succinct description after the fact.) In its use of her private language as a sort of metaphorical resource, it could be described as an experiment in work-life continuity or the unscrupulous dealings of an extortionist. For her, the effect was devastating. The Dolphin “hurt me as much as anything in my life,” she wrote.

Beginning in his 30s, Lowell was hospitalized semiannually for manic-depressive illness, with periods of frenzied productivity giving way to months of paralysis and despondency. (His descriptions of these hellish descents are grimly, grayly apt: “inert, gloomy, aimless, vacant, self-locked,” “muck and weeds and backwash,” “groveling, low as dirt purgatorial feelings,” “the blank sense of failing.”) We cannot be certain to what extent his illness contributed to the impetuousness and cruelty found in his correspondence with Hardwick. “If [lithium] could stop the attacks,” Harriet Lowell wrote, “that meant the illness was not caused by some terrible character flaw.” Manic depression instigated difficult cycles in his life before these letters were written—intervals of violence, self-harm, abnegation, wretchedness—and did so after, too, up until his death. (His continued hospitalizations during his marriage to Blackwood contributed to her ultimately leaving him.) Such knowledge flows darkly beneath our reading of The Dolphin Letters. Long association with its day-to-day realities may also help to explain the uncommon understanding displayed by Hardwick throughout the collection.

Hardwick is the book’s true center. Her writing eschews mournfulness almost as a matter of personal style. The animus of the early letters dissipates fairly quickly. What emerges is the kind of obliquely gorgeous, epigrammatic writing she is best known for. Her attentions elevate her most frequent subjects—work, literary gossip, motherhood—to an improvised, offhand poetry. Great art remains ever present as a species of hope. “We never know what’s ahead of us,” she wrote to Lowell in 1973. She plays several roles for her estranged husband—wife, mother, artist, confessor—often within the space of a single letter. Even in the midst of great pain and embarrassment, she shows a certain strength of character, her language plangent and clear-eyed, her concern proper. Her anger is often sublimated into practicality (she is forever reminding the befuddled Lowell about income taxes and the state of his archive), though she is not above hectoring, particularly when it is most deserved, as in this letter from the summer of 1970, shortly after his desertion:

You are going, irrevocably, to an emotionally crippled life, chaos, withdrawal, no support, no loving help, none of the effort made by a wife to create a life, everything for the man she loves. You are leaving private jokes, your own life, to lead someone else’s life, you need the reality, the energy I brought to you, the care, the humor.

A life of shared reading underpins much of the correspondence. There are passages of great wit and flaring warmth on William Blake, Simone de Beauvoir, Herman Melville, Derek Walcott, Andy Warhol, W.H. Auden, John Crowe Ransom, and the Brontës. There is a powerful sense, too, of their professional lives, of the seriousness with which they took their vocation as writers. Lowell is, as ever, a confident raconteur on his life and work, while Hardwick makes many oblique references to the books in progress that would become her most esteemed projects. (Seduction and Betrayal: Women and Literature and Sleepless Nights were written during this period.) Each exerted meticulous control over the page in inverse proportion to that which they wielded over their lives. 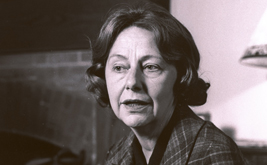 The Dolphin Letters also includes correspondence from a range of 20th century titans who made up the pair’s intimate circle: Adrienne Rich, Frank Bidart, Mary McCarthy, Elizabeth Bishop. These letters offer their own pleasures apart from the central sweep of the Lowell-Hardwick narrative—allusions and professional complaints, aesthetic anxieties, the occasionally dazzling metaphor. It is Bishop who emerges as Lowell’s foil, a sort of stolid, stony eminence. She has always been Lowell’s best critic, responsive but not overimpressed, more interested in the man than in the mythology. She objects to his use of Hardwick’s letters in The Dolphin, and their back-and-forth on the subject is contentious, vexed, fascinating. She quotes from a letter Thomas Hardy wrote to James Douglas in 1912, “What should certainly be protested against…is the mixing of fact and fiction in unknown proportions. Infinite mischief would lie in that.” Lowell counters, unconvincingly, “Now Lizzie’s letters? I did not see them as slander, but as sympathetic.” Her final indictment—“Art just isn’t worth that much”—is a moral conjecture that even some 500 pages of letters cannot exhaust.

Editor Saskia Hamilton’s choice of supplementary materials is modest but finely calibrated. It includes an elegant introduction, a chronology, a compendium of endlessly readable footnotes, decodings of works in progress, and a pair of Hardwick pieces, including “Writing a Novel,” the story that eventually became Sleepless Nights. (Hamilton’s previous editorial project Words in Air, which collected the letters of Lowell and Bishop, is equally essential.) She also helpfully notes when and where Lowell pilfered lines from Hardwick’s letters, showing their careful shaping, the paraphrasing that so incensed Bishop. Unnerved, we watch The Dolphin take shape before us.

Something else emerges from The Dolphin Letters: that topography of intimacy long unions often describe. Each of their letters was in some sense a private story that partook of life as a means of making sense of shared experience, confirming it or mourning it or holding it to the light. If their correspondence anticipated aspects of their art—a working through of opaque material—it was also the final coherence of a great and conflicted love. “Somehow it is the long, wide gap between lives that makes letters impossible rather than necessary,” Hardwick wrote to Lowell in 1975, and there is often that feeling in this remarkable volume, as of a desperate leap, an impossibility attempted. Lowell, finally, had no cause to steal for his art; the letters themselves offer a rare and exquisite poetry.

On September 12, 1977, Lowell died in a cab while on his way to see Hardwick. They had reconciled after his painful break with Blackwood, traveling together to Maine and to Russia. “I mean as clearly as I can say that I don’t feel vulnerable,” she wrote to Robert Craft, “don’t feel sent out on approval…. It is very odd—we are just going along having a very agreeable time.” On his death certificate, she described herself as a “friend” but identified herself as “Elizabeth Lowell.”