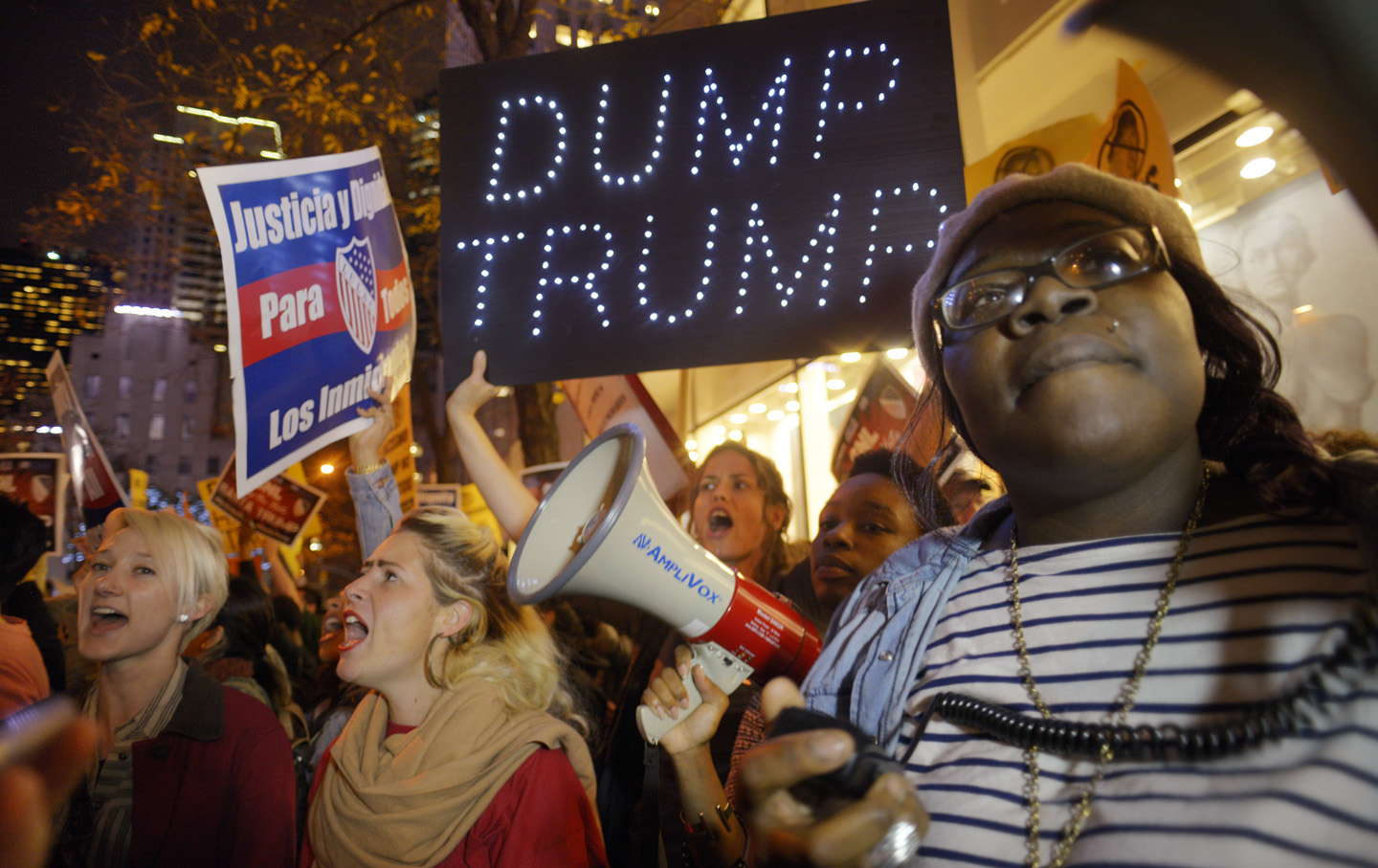 Here is how it came to be that Larry David kind of sort of called The Donald a racist. When NBC announced that Trump would be hosting Saturday Night Live, several progressive organizations, 50 cultural and intellectual luminaries, and several members of the Hispanic Congressional Caucus condemned the decision. The National Hispanic Media Coalition teamed up with organizations like Moveon.org and the Justice League to organize a protest outside 30 Rock the night of the show. The DeportRacism.com PAC joined in, offering $5,000 to any audience member who would stand up during the show and call Trump a racist. As organizer Santiago Cejudo put it, “We’re hoping the $5,000 will help people on set or in the studio audience find the bravery to speak out loudly and help focus the national conversation on that we need to deport racism, not people.”

Towards the end of Trump’s painfully flat opening monologue, someone yelled out, “You’re a racist!” An obviously unfazed Trump responded to the clearly staged interruption, by asking, “Who the hell is… Oh, I knew this was going to happen.… Who is that?”

At this point a spotlight revealed that it was Larry David, who had appeared as Bernie Sanders in the opening skit. No longer in costume, David said again, “Trump’s a racist.”

“Why would he do that?” Trump asked.

“I heard if I did that, they’d give me $5,000,” said David with his signature combination of disinterest and distaste. Trump had the last word, saying, “As a businessman, I can fully respect that.”

Many in the media have praised David for his yelling, with some even confusing an obviously prepared exchange with a genuine disruption. Variety magazine said, “Larry David provided one of the few real moments of spontaneity in Saturday’s episode.” Complex magazine praised the “legitimate burn by Larry David (a.k.a. The God),” and described it as “fantastic…something of an Easter egg that none of us could have anticipated but were nonetheless praying for.” The Daily Beast described David’s yelling as one of the episode’s “scathing Trump critiques.”

The Los Angeles Times could hardly contain its praise of David: “Maybe Larry David should run for president. After all the agony and ecstasy, the promos and protests, Donald Trump may have hosted Saturday Night Live, but David owned it, first reprising his scary-great Bernie Sanders in the show’s opening skit and then giving voice, literally, to the hundreds gathered outside the NBC studio at 30 Rockefeller Center.”

I have to admit that, as a huge Larry David fan who is well aware of his progressive track record, his mocking of Bush, and his support of The Nation in real life and on Curb Your Enthusiasm, I, too, wanted to see David’s act as a subversive anti-Trump protest. David got to call Trump racist! And I’m sure David does genuinely view him as a racist. But I couldn’t help seeing it as a bit of an inside joke between Trump and David at the expense of those who genuinely protested NBC’s decision to host a leading Republican candidate known for his racism and vitriol.

“Having a Latino say it would have felt real.”—Gabe Pacheco

So, I decided to ask some comedians, performers, and artists who create political comedy what they thought.

Gabe Pacheco, a comedian and my co-host on The Katie Halper Show on WBAI, admitted, “I haven’t made time to watch SNL on Saturday nights since I was a minor under curfew.” But he did find it “kind of bonkers that SNL, the beloved comedy institution, absent of any Latino writers or performers, is going to devote an entire episode CELEBRATING an illuminati-rich white man running for president, whose opening campaign remark was ‘Mexicans are rapists’.” Pacheco saw the Larry David incident as a sign of Saturday Night Live’s wanting to have its cake and eat it too. “SNL wanted to celebrate Trump and wag a finger at him. When Larry David calling Trump racist, that felt ‘all in good fun.’ I love Larry David, but he’s another rich man who is already in the club poking fun at Trump. He’s still speaking for a larger community that’s not necessarily his to speak for. Having a Latino say it would have felt real.”

Comedian and Sirius Radio show host Dean Obeidallah described the exchange as “a comedic way to raise the issue about the protest.” But he thought “the way David played it, he sort of laughed off the racism claims…. It could even be seen as mocking the validity of the protesters’ claims.”

Comedian and WeActTV host Julianna Forlano told me, “I don’t think asking someone to call Trump a racist on the air was particularly effective because it left the protesters open to ridicule when they had very good cause to be protesting. As a comedian, I did think it was funny to have Larry David make fun of that, as it fits his Curb character, but at the expense of the protesters, which I didn’t like.”

“Watching old rich white men jerk each other off on national TV is pathetic.”—Mike Daisey

Fernando Sosa, a political artist and creator of the Donald Trump Butt Plug and Donald Trump Punching Bag, told me he only watched the show because “a friend was able to download it from a torrent website, so I wouldn’t help NBC ratings since I’m actively boycotting it.” He saw the Larry David sketch as, “spitting in the face of protesters…making fun of protesters more than anything.”

Performer and writer Mike Daisey described what David did as “terrible comedy that punches down.” “It turned Trump’s racism into an actual joke,” said Daisey, “so it not only wasn’t funny, it made me sad. Watching old rich white men jerk each other off on national TV is pathetic.”

Comedian Frank Conniff also referred to punching down and was even more emphatic in his rejection of any framing that suggested David had actually called out Trump: “Let’s be clear: LARRY DAVID DID NOT CALL TRUMP A RACIST. That was part of a sketch and the main purpose of that moment was to blunt the criticism of protesters who had a legitimate grievance. It was a case of millionaire comedians punching down and it was fucking awful.” Sarcastically, Conniff added, “How satisfying to see a blatant racist and vicious misogynist get the friendly, gentle, good-natured ribbing he deserved.” About David’s appearance as Bernie Sanders in the opening sketch Conniff said, “Bernie Sanders is the most rational politician in America right now, yet Larry David and SNL portray him as a crazy doddering old man.” Conniff also lamented the way Saturday Night Live has become less irreverent and more conservative: “In the early days of SNL, the show was heavily influenced by National Lampoon. The current era is more in the vein of National Review.”

OK. So, it wasn’t just me who saw the David participation as problematic, if you’ll forgive the totally overused but irresistible word choice.

But could it be both problematic in its intention and an effective way to highlight Trump’s racism? Deport Racism’s official Twitter account had already tweeted out, “#LarryDavid wins the $5,000 ‘bounty’ from https://t.co/PcIfWXCmnT for calling Trump a Racist on #SNL. Joke or not, it was true. Go Larry!—Deport Racism (@DeportRacism) November 8, 2015.”

In search of a response that exceeded 140 characters, I e-mailed DeportRacism.com founder Luke Montgomery. He replied:

In calling Trump a racist live on the show, [Larry David] brought massive amounts of media attention to the issue that Trump is attacking Latino children who are born in the U.S. and are citizens and calling them ‘anchor babies’ with threats of tearing up the Constitution and stripping them of their citizenship and rights as Americans and deporting them just because their parent[s] are Latino immigrants. Trump’s attacks on these American children are racist and he [is] exploiting kids to drum up support from racists. We love that Larry called him a racist, and even though he was joking, it was true. With all the headlines that Larry David created calling Trump a racist, he deserves the $5,000 DeportRacism.com bounty and award.

When I asked if Montgomery thought that David was mocking or undermining the very protest his PAC was trying to organize, he responded:

We thought that it turned out great and created more headlines with Larry David making a joke about what was the elephant in the room on the show’s set. There was a tension. SNL security was on high alert and producers feared someone would disrupt the show by calling Trump a racist during a scene, and viewers were watching to see if someone would call Trump a racist because of all the media reports about the DeportRacism.com bounty. They simply had to address it, and the show itself was forced to call him a racist in the monologue script. While they tried to make light of it, the fact that they were forced to acknowledge it using Larry ended up getting our message about Trump’s racist attacks out there in the media much more than had it been a protester. The strategy worked better than we could have hoped.

Montgomery clearly has some skin in the game, when it comes to determining the effectiveness of a PR campaign organized by the very PAC he founded. But maybe he is onto something. Maybe David and SNL intended to take the wind out of the sails of the protesters, co-opting their movement and inoculating the show from criticism by incorporating it into a sketch. But maybe this did wind up helping the very protest they sought to distract attention from. This would make David an unwitting or even unwilling hero of the social movements fighting against Trump and for the rights of immigrants and Latinos.

And this would read a lot like an episode of Curb Your Enthusiasm.