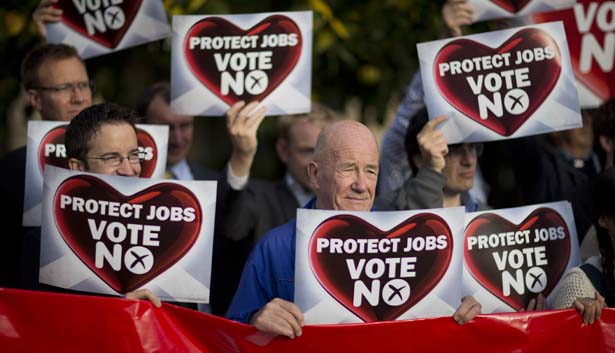 Edinburgh, Scotland—Five days before the Scottish independence referendum, one of the larger demonstrations of a long and intense campaign was held in Glasgow. It wasn’t a rally for a “yes” or a “no” vote. It was a protest outside the Scottish headquarters of the BBC.

Thousands of independence supporters showed up to object to the coverage of the campaign by the broadcaster in particular, and media in general.

At a point when polling suggested Scotland was closely divided on the issue of independence, Scottish First Minister Alex Salmond said, “I think there’s real public concern in terms of some of the nature and balance of the coverage.”

Well beyond the Scottish borders, there was recognition of the concern. English commentator George Monbiot ripped into media coverage that frequently referred to “the threat” rather than the prospect of independence, compared the democratically elected Salmond to a dictator and dismissed Scottish complaints about austerity as a demand for a “something for nothing society.“ Monbiot’s important essay was headlined, “How the media shafted the people of Scotland.”

Salmond’s “yes” side ultimately lost, as Scots decided Thursday by a convincing 400,000-vote margin to remain a part of the United Kingdom.

But the debate about media coverage carried forward after the count was finished, with Iain Macwhirter, a veteran Scottish political commentator and the author of the book Road to Referendum, asserting on a post-election television panel, “Anyone who reviews the press coverage of this campaign will not be able to come out with any other conclusion than that it was extremely one-sided.”

Political campaigns often produce complaints and concerns about media coverage. And in an age of radically transforming media landscapes, the debate itself is changing—as analysts seek to weigh the impact of social media as an alternative to traditional media. Yet author and activist Tariq Ali noted after speaking to a pro-independence rally Monday in Glasgow, “Yes, yes, people should be concerned about the media coverage. The newspapers have been appalling when it comes to covering the story of what’s been happening in Scotland.”

Major media outlets remain powerful forces in our democratic life. They are not always definitional—as any newspaper editorial writer will tell you—and it is important to recognize that in Scotland and beyond a great many factors influence election results.

Still, there are those moments that illustrate the extent to which major media outlets tend to echo one another rather than the range of popular debate.

That has been evident in the United States on a number of high-stakes issues in recent decades. When the US was weighing whether to approve the North American Free Trade Agreement in 1993, polls suggested that the country was deeply divided, and the House split 234-200. Yet the chattering classes were overwhelmingly pro-NAFTA, and newspaper editorial pages were very nearly universal in their support for the controversial pact. It wasn’t just the editorial pages; an analysis by Fairness and Accuracy in Reporting found that pro-NAFTA sources highlighted by major media outnumbered opponents by more than 3-to-1. When matters of war and peace are in play, as was the case before the invasion of Iraq in 2003, FAIR has found even more overwhelming patterns of media turning up the volume on pro-war voices while dismissing those urging caution.

In Scotland, on the morning after Thursday’s vote, discussions of the media coverage became an important part of the overall analysis of the result.

Macwhirter and others argued that the media fueled a sense that a “yes” vote would lead to economic disaster—despite the fact that Nobel Prize–winning economist Joseph Stiglitz and others had dismissed key elements of the “no” campaign as “a bluff.”

Referring to the “no” campaign, Stiglitz said before the vote, “I’ve been a little bit shocked how much of it is based on fear, trying to get anxiety levels up and how little of it has been based on vision.”

The BBC rejected complaints that it hyped claims about economic challenges that might be faced by an independent Scotland. And, notably, the broadcaster covered what Stiglitz had to say.

Yet there was no debating the imbalance in the positions taken by the newspapers that circulate in Scotland.

Scottish-based daily newspapers, which are widely read and influential, were overwhelmingly opposed to independence—with just one major newspaper, the Sunday Herald, urging a “yes” vote. The British national dailies, which circulate widely in Scotland, were even more determined in their opposition—offering up intense criticism of the idea of independence and of independence campaigners.

That was especially true after a key poll published almost two weeks before the vote suggested that the “yes” side had moved into a narrow lead. Jim Sillars, a former deputy leader of the Scottish National Party and an outspoken independence campaigner, said the numbers “rattled the cages” of economic and political elites in London.

It was at that point that the papers turned up the “no” volume.

There will be books written on the overall character and the content of the coverage. But what was most striking was the stances taken by the newspaper editorial pages of the Scottish papers. No one expected them to be universal in their support for independence. But their opposition was exceptional.

“Perhaps the most arresting fact about the Scottish referendum is this: that there is no newspaper—local, regional or national, English or Scottish—that supports independence except the Sunday Herald. The Scots who will vote yes have been almost without representation in the media,” wrote Monbiot, one of the UK’s most prominent and media-savvy campaigners on environmental and democracy issues. “There is nothing unusual about this. Change in any direction, except further over the brink of market fundamentalism and planetary destruction, requires the defiance of almost the entire battery of salaried opinion. What distinguishes the independence campaign is that it has continued to prosper despite this assault.”

At the start of the referendum campaign, support for a “yes” vote was estimated at roughly 30 percent. In the end, 45 percent of Scots voted for independence. Much of the credit for the shift goes to effective use of social media and grassroots campaigning by “yes” supporters. Ultimately, however, as Monbiot reminds us, “Despite the rise of social media, the established media continue to define the scope of representative politics in Britain, to shape political demands and to punish and erase those who resist.”

Monbiot could have removed the words “in Britain” and been just as accurate in his observation.