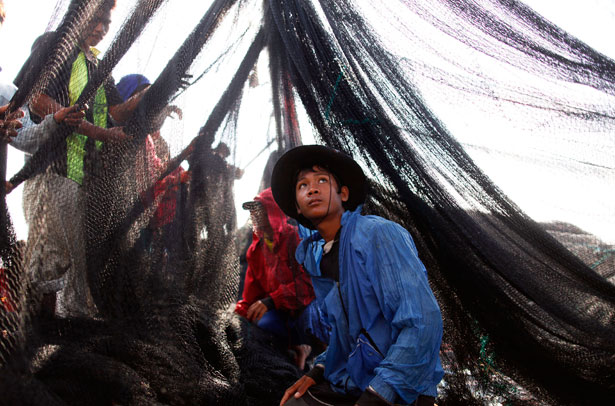 Migrant workers from Myanmar sail out of a Thailand port on February 23, 2010. (Reuters/Damir Sagolj)

The glistening prawns at the supermarket might cost a quite a bit per pound, but off the shore of Thailand, the price of the catch is measured in the bodies of both fish and people. Life is cheap in the labor market that churns out our seafood.

According to an investigation by the London-based Environmental Justice Foundation (EJF), the system is rigged so that the market depends on imported ultra-exploited labor, along with unbridled exploitation of Southeast Asia’s fragile marine ecosystem.

Pirates and Slaves from Environmental Justice Foundation on Vimeo.

The seeds of the crisis were planted back in the 1960s, when Thailand’s fishing industry exploded with the introduction of Western fishery technology. Over-intensification of industrial fishing eventually led to overexploitation, sparking a vicious cycle of Thai trawlers chasing dwindling fish supplies by foraying into neighboring countries’ waters. Amid lax regulation and endemic corruption, underground and pirate fishing operations metastasized, spawning a massive, violent maritime gangland. Today, while native Thai workers move away from the grueling low-wage labor of industrial fishing, migrants from poorer countries are drawn onto minimally regulated vessels and now make up roughly 80 percent of the industry’s estimated 145,000 workers.

Though Asian countries have instituted labor regulations for migrant workers, such as wage and hours protections and oversight of labor recruitment, as well as regional labor accords governing migrants’ legal rights, both state regulators and organized labor have only limited reach among the poorest workers, and victims often lack legal recourse.

According to International Labour Organization research:

average migrant workers aboard Thai fishing vessels get paid less than half the monthly wage received by Thai fishers and around 25 per cent less than Thailand’s national minimum wage of 300 baht or $9.20 per day…. Due to the shortage of labour and the lack of legal limits to the amount of hours someone can work aboard a Thai fishing vessel, a quarter of respondents reported working 17 to 24 hours per day (including time ‘on-call’) and a further 40 per cent reported ‘indefinite’ working hours.

Amidst endemic corruption, EJF reports, “vessel operators are also able to retain profit margins by resorting to deception, coercion and violence to source workers.” Much of this trafficking is barely regulated because the vessels aren’t catching top-dollar fish, but rather, hauling in boatloads of so-called “trash fish,” the offal of the maritime industry, used as a cheap protein source to feed other fish stocks for global markets.

The catchers of trash fish are treated as disposable goods themselves. EJF describes Maung Toe’s experience being violently pressed to work on an illegal vessel:

For the next five months and 24 days, Maung Toe would work without pay aboard a vessel fishing illegally in Indonesian waters.… The vessel’s captain kept constant watch for Indonesian enforcement agencies and whenever a suspected Navy vessel showed up on the radar, he would order the nets to be immediately pulled and they would flee.

“If we had been caught by the Indonesian authorities,” [he said], “we would have been sent to prison.”

Migrants have reported receiving threats such as: “I killed the guy that you are replacing, if you try to flee I will take care of you too.” Some trafficking operations target the minority Rohingya population, “who are reportedly sold to Thai and Malaysian fishing boats when their families fail to pay ransoms.”

This system has devastating environmental consequences, as well, EJF warns, including damage to fish nursery grounds, “destruction of fragile marine ecologies such as coral reefs,” and “unending, and sometimes violent, conflicts with local fishing communities.”

Though Thailand is one of several countries driving the patterns of exploitation, Alexandra Sedgwick, communications coordinator for EJF, says via e-mail, “The severity and extent of the abuse and exploitation in Thailand’s seafood industry are unique and directly related to the country’s prosperity via its focus on the production of high-value seafood products for export in the context of an impoverished fishery.”

Last year, a Guardian exposé on “slave labor” in Thai fisheries prompted vows for reform from the Thai seafood conglomerate Charoen Pokphand Foods and chain stores like Walmart and Tesco.

But beyond industry-led initiatives to curb the ugliest labor practices, EJF wants the Thai government to tackle both environmental destruction and labor exploitation.

To safeguard the ecology, EJF calls on the government to enforce and expand Marine Protected Areas, along with “additional rights-based management measures such as catch quotas, closed seasons and no-take zones” to limit exploitation to sustainable levels.

And while corporations can’t substitute for regulators, EJF says, retailers, buyers and producers of Thai seafood should “demand full traceability in the seafood supply chain down to fishing vessels supplying raw materials to fishmeal producers.” Consumers would also benefit from comprehensive, transparent labeling systems, which are sorely lacking in the United States.

(Sadly, while the unregulated seafood trade from Asia flourishes in Western markets, US fisheries have been devastated by global competition, though local sourcing might be safer and more ethical.)

In addition, a “multi-track approach” to environmental and social justice requires long-term empowerment of consumers, workers and maritime communities.

Along with the need for tighter protections for migrants, EJF points out that among local populations, indigenous fishing communities are extremely vulnerable as well. But cooperative management systems that engage traditional fishing communities in “the planning and management of coastal and marine resources can lead to more healthy and productive fisheries,” Sedgwick says, although Thailand has only begun to pilot programs for community-based co-management.

While labor and environmental regulations typically focus on land-based ecosystems and workplaces within national borders, the seas remain a lawless frontier. Transparency in the supply chain won’t fix systemic regulatory gaps, but raising consciousness of the brutal impact of industrial fishing and the market’s appetites—for cheap seafood, for commercial convenience, and for unprotected labor—is a start, and our last hope for protecting what’s left of our ravaged oceans.