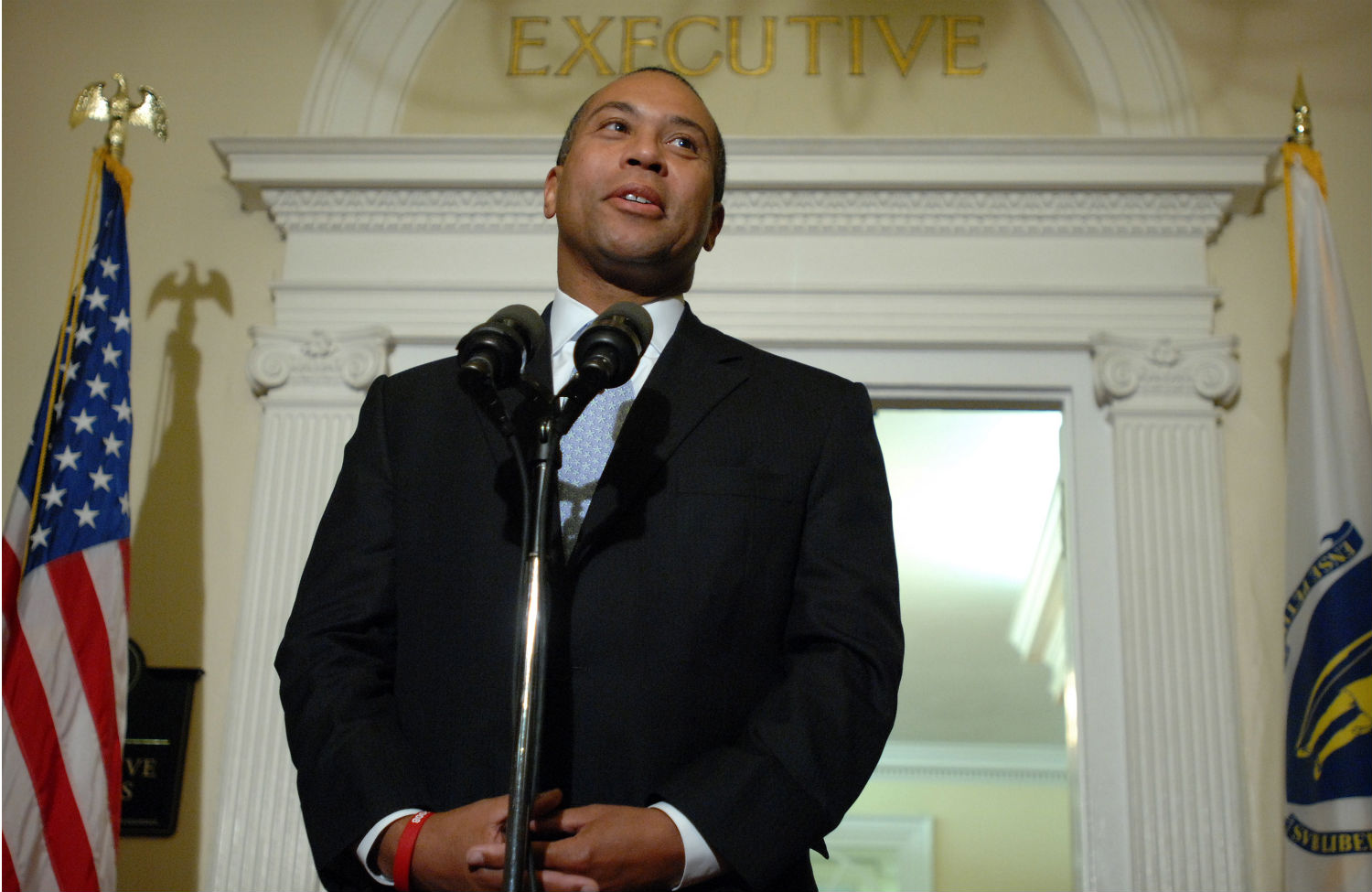 “Hey, Barack, it’s Deval. You know those 400 kids who got themselves arrested outside your place last month, protesting Keystone and ‘all of the above’? Well, a whole bunch of them just showed up at my office and want me to ban new fossil-fuel infrastructure in the state. And they’re quoting the goddam IEA!”

OK, I made that up. But it’s a conversation I couldn’t help imagining between Governor Deval Patrick of Massachusetts and his personal/political friend Barack Obama on Monday morning. That’s when a couple hundred young people representing the statewide network Students for a Just and Stable Future, most of them engaged in the fossil-fuel divestment campaigns on their campuses, walked out of their classes and gathered in sleet and rain on the steps of the State House in Boston.

Calling their action the Youth Walkout for Climate Justice (in alliance with the Climate Legacy Campaign coordinated by Cambridge-based Better Future Project and its grassroots network 350 Massachusetts), they insisted that Patrick “draw a hard line against new fossil fuel infrastructure,” and that he meet with them to answer their demands. A distinct possibility of civil disobedience hung in the air. (Trust me, I watched the organizers run through their action contingency plans the night before. This is also a good place to mention that I helped launch 350MA two years ago and serve as a volunteer on the Better Future Project board, though I’m currently on leave while writing a book.)

The “kids” cited the International Energy Agency’s 2011 World Energy Outlook, which reported that the world must shift decisively away from new long-term investments in fossil-fuel infrastructure by 2017 or risk “locking in” decades of carbon emissions that would all but guarantee catastrophic warming within this century—that is, quite possibly their lifetime. That’s the same reasoning behind the effort to stop Keystone XL—and to stop new natural gas plants in Massachusetts (and gas and coal export facilities everywhere).

“The energy infrastructure built today will affect our entire lives, and we insist that these decisions not be made without our involvement,” the students wrote in an open letter to Patrick posted weeks ahead of the walkout and demonstration. “We are driven to this action by the desperation we feel as we see the impacts of political inaction on the climate crisis…. Your legacy is our future, Governor Patrick.”

What to do if you’re Deval Patrick? Arguably the best governor in the country on climate change—the state’s Global Warming Solutions Act, the strongest climate law in the nation, as well as Green Jobs and Green Communities legislation, were all passed in his first term—he now finds himself confronted by a fast-growing state and national youth climate movement (i.e., voters representing his political future) telling him that his signature accomplishment, and key to his legacy, is simply insufficient. “Your climate initiatives, while stronger than those of most politicians,” the students wrote, “are not enough.”

Well, if you’re Deval Patrick, here’s one thing you do: You tell the students that you’d be happy to meet with them, and you direct your office to schedule the meeting. That is in fact what happened, so that when a delegation of students on Monday marched up to the governor’s office on Beacon Hill and met with Patrick’s deputy chief of staff, they were able to come back out and report to the cheering rally (and the media) that Patrick agreed to sit down with them in the near future.

Of course, that decision wasn’t made on the spot Monday morning. When the students signalled their intentions in the weeks prior, the administration was quick to respond. Last week the students and their Better Future Project partners sat down with David Cash, one of Patrick’s key advisors on energy policy and newly appointed head of the Department of Environmental Protection.

Cash asked the students for a date by which they’d want to see the ban take effect, which the students took as an encouraging sign. But Cash ultimately explained that with the state’s remaining coal plants coming offline by 2017, as well as regional nuclear plants, there is a serious concern that without new natural gas capacity, renewables alone won’t fill the gap, and that blackouts in eastern Massachusetts—and the ensuing political fallout—would become a real possibility. (Better Future Project’s Climate Legacy white paper argues that an urgent effort to scale up renewables and speed efficiency and conservation measures, commensurate with the urgency of the climate crisis, could meet the challenge.)

With the door to any further discussion of the matter seemingly closed, it was only after a last-ditch appeal directly to Patrick (through a friendly back channel) that the offer of a meeting came—the night before the walkout.

David Cash is a very smart and congenial guy, and he and the students appear to share a mutual respect. But when I talked with him before the student action, he sounded genuinely perplexed, perhaps even a tad frustrated, that he was now being forced to defend Deval Patrick’s climate legacy to young climate activists. What the students should be doing, he told me, is “holding up what Patrick has done as a model for other governors who are nervous, and say, here’s how you do it.”

In a follow-up email, he described the administration’s record: “GHG emissions have decreased by 11% since 2007, solar capacity has increased from 3MW to over 450MW, wind has increased from about 3MW to over 100MW, Massachusetts has become number one in the country in energy efficiency while saving customers billions of dollars, and clean energy jobs have grown between 6% and 12% per year for the last several years.” (The emissions reductions are smaller than needed to meet the 2050 goal, and the Patrick administration has yet to set the crucial interim targets for 2030 and 2040.)

And yet, what about the IEA’s warning of a catastrophic emissions “lock-in” if we don’t stop building new carbon infrastructure now? Cash never directly answered that one. And what about recent warnings from top scientists that even the internationally agreed-upon goal of a 2-degree Celsius warming limit may well bring disastrous effects, and that we simply have to move faster to address the crisis?

“Governor Patrick has not shied away from saying that this is a huge problem that we have to address now,” Cash said. But, he insisted, to say “we’re just going to have to suck it up and have some blackouts, and prices are going to be really high for the next ten years until we can get all of this stuff online—that’s not going to sell. Massachusetts is going as fast as possible.” Cash’s biggest worry is that the resulting political backlash would set back the national climate agenda (and, though he didn’t say this explicitly, Deval Patrick’s political prospects).

So there you have the stark dilemma, and brutal reality, of progressive climate politics circa 2014. On the one hand, a rising generation of young people who feel trapped in an impossible situation that they didn’t make or choose. On the other, a generation of progressive politicians caught between an apocalyptic scientific reality and a political and economic status quo that is driving us off the cliff—a status quo they apparently cannot imagine ever changing, even in the face of increasingly visible climate impacts and ever more alarming warnings from scientists.

These students, and the larger climate movement of which they’re a part, are desperately trying to change that political reality. And if they can’t move the most sympathetic politicians to show the kind of leadership that could break the status quo—if even Deval Patrick can’t do what the crisis really demands, even in a state like Massachusetts, and if his friend Barack Obama can’t stand up to the carbon lobby and reject the Keystone XL, sending an unmistakable and unprecedented message to the world—then this generation of young leaders, who increasingly grasp the scale and urgency of the climate crisis, may well begin to lose hope.