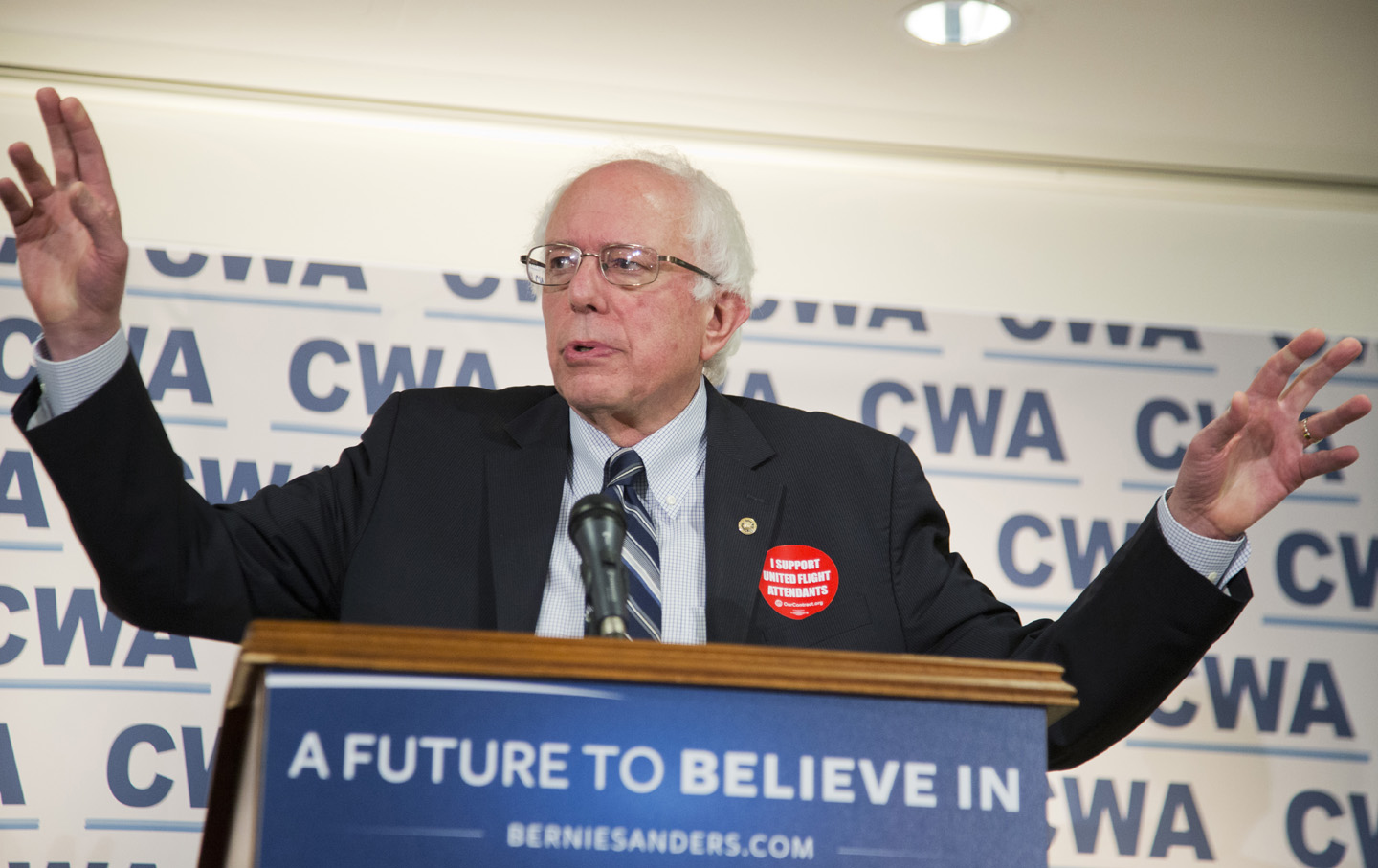 Bernie Sanders speaks to reporters and members of the Communication Workers of America (CWA), following the union's endorsement of Sanders, at the CWA's headquarters in Washington. (AP Photo / Manuel Balce Ceneta)

Candidates seek election-season endorsements for a lot of reasons. Endorsements by groups with substantial membership bases, and with a capacity to turn out those members for favored candidates, have the obvious potential to shape election results. But there’s more to it than that. Endorsements can legitimize political upstarts. Endorsements can solidify the positions of front-runners. And endorsements can give a boost to a candidate at a critical stage in the process.

Backers of Vermont Senator Bernie Sanders, who is fighting to catch up with former secretary of state Hillary Clinton in the critical first-caucus state of Iowa, and who is fighting to maintain a narrow lead in the critical first-primary state of New Hampshire, say he got just such a boost Thursday when a pair of major endorsements were announced.

Within minutes of one another, the progressive activist group Democracy for America and the Communications Workers of America union both backed the senator in the race for the Democratic nomination.

DFA, which was started by backers of former Vermont Governor Howard Dean’s 2004 presidential bid, has grown into a well-regarded grassroots political and issue-advocacy organization with active groups in states across the country and a track record of backing progressive candidates at the local, state and federal levels. Early in the 2016 race, the group urged Massachusetts Senator Elizabeth Warren to seek the Democratic nomination. This month, it conducted a national poll of members that concluded December 15. Sanders won 87.9 percent of the 271,527 votes cast in a contest where an endorsement could only be secured with a super-majority (66.67 percent or more) of all the votes cast. Clinton (who is backed by Howard Dean) took 10.3 percent, while 1.1. percent backed Maryland Governor Martin O’Malley.

The level of support for Sanders was unprecedented. When the 11-year-old group held a similar vote on whether to endorse in the 2008 presidential race, no candidate cleared the super-majority hurdle.

87.9 percent of Democracy for America members voted for Sanders in a national poll.

“This is an historic moment for DFA, for the progressive movement, for the Democratic Party, for people-powered politics—and for Bernie supporters who relentlessly rallied over nine intense days to Get Out The Vote and win this pivotal endorsement,” explained Democracy for America’s executive director Charles Chamberlain. “Bernie Sanders is an unyielding populist progressive who decisively won Democracy for America members’ first presidential primary endorsement because of his lifelong commitment to taking on income inequality and the wealthy and powerful interests who are responsible for it.”

Chamberlain explained that “we’ll immediately start organizing on behalf of Bernie in key primary states, from Iowa, New Hampshire, South Carolina, and Nevada to nearly a dozen states voting on Super Tuesday. We’ll also be building—as Bernie has called for—a political revolution ready to elect populist progressive candidates nationwide to local school boards, city councils, and state legislatures, and all the way up to the US Senate.”

DFA activists will join Sanders backers from groups such as the Working Families Party, Progressive Democrats of America,  Democratic Socialists of America, Friends of the Earth Action, and a pair of key unions: National Nurses United and the American Postal Workers Union.

Most major unions that have issued endorsements are backing Clinton, however, including the powerful National Education Association, the American Federation of Teachers and the American Federation of State, County and Municipal Employees. The former secretary of state, who has a solid lead in national polls, has attracted a number of new union endorsements in recent weeks. In late November, for instance, the Laborers’ International Union of North America endorsed her, as did the Service Employees International Union. “Hillary Clinton has proven she will fight, deliver and win for working families,” said Mary Kay Henry, the international president of SEIU, which in the 2008 primary season backed Barack Obama over Clinton.

Historically, the Communications Workers union, might have been expected to join those other large labor organizations in backing the front-runner. A major presence in states across the country, which represents 700,000 workers in telecommunications, media, airlines, higher education, healthcare, public service and manufacturing, the CWA is one of the largest unions in the national AFL-CIO (which has not made an endorsement) and in state and local labor federations. On Thursday, however, CWA National President Chris Shelton announced that “CWA members have made a clear choice and a bold stand in endorsing Bernie Sanders for President. I am proud of our democratic process, proud of CWA members, and proud to support the candidate whose vision for America puts working families first. Our politics and economy have favored Wall Street, the wealthy and powerful for too long. CWA members, like voters across America, are saying we can no longer afford business as usual. Bernie has called for a political revolution—and that is just what Americans need today.”

The CWA endorsement followed a three-month process that included hundreds of meetings with union members in their workplaces and an online endorsement survey that CWA officials say attracted tens of thousands of votes.

“Bernie Sanders stands with working families against corporate greed, against Wall Street and the big banks, against politics as usual. He stands against the flood of money in politics that’s corrupting our democracy and attacking the right to vote. He knows that we have to take on the rich and powerful special interests to turn around this economy and end the 40 years of stagnant wages that working families have endured,” Shelton said of the decision to endorse. “He’s the candidate who can do it, and we are going to help him. When CWA endorses a candidate it is just the beginning. Our 700,000 members are fired up, and we are going to work overtime to elect Bernie Sanders as the next President of the United States.”

Like other major unions, CWA has a history of active political engagement in states across the country. In the 2012 presidential election, the union maintained politically potent ground operations in 38 states, and union officials note that “CWA has more than 300,000 active and retired members in the states that will hold primaries between now and April 1.”

No matter who wins the Democratic nomination in 2016, it is expected that the candidate will rely on that ground operation in the November race against the Republican nominee. But, for now, CWA is with Sanders, who enthusiastically accepted the union’s endorsement Thursday, telling CWA members, “Brothers and sisters, let me thank the 700,000 members of the Communications Workers of America for their strong support. For decades you’ve been fighting for the rights of working families and I’m so proud today to be with you in that fight.”