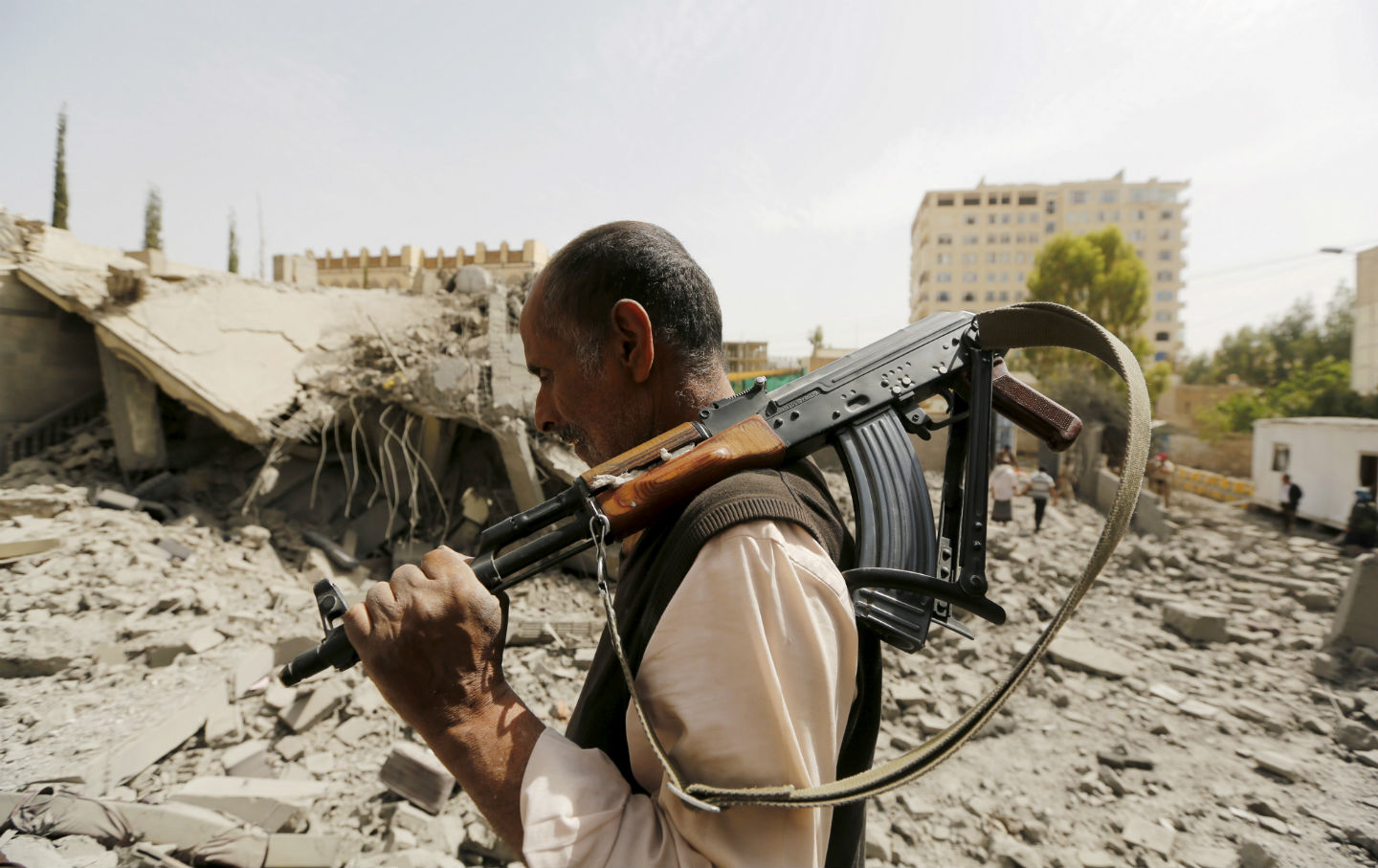 A guard walks past the house of an army commander loyal to the Houthis, after Saudi-led air strikes destroyed it in Sanaa, Yemen, June 15, 2015. (Reuters/Khaled Abdullah)

Sanaa, Yemen—Dr. Shawky Ali Abdel Gadeer struggled beneath the rubble for his cellphone. It was just after 2 AM on June 12. A missile had smashed into his house in Sanaa’s historic Old City, burying him and his relatives beneath the ancient bricks. The 40-year-old pharmacist managed to call his mother. He described where he was, and told her to find help. Local residents began to dig in the darkness. By the time they pulled him out roughly four hours later, he was dead.

Four other Gadeer family members were killed in the strike: Hassan, his wife Amat al-Malik, Abdullah, and his 16-year-old son Rashad. Rashad’s body was the last to be retrieved, at 6 PM. Residents wrapped his corpse in a blanket and carried him out from the rubble and through the picturesque gingerbread-style buildings to be buried.

The Saudi military later denied responsibility for the attack.

“They are liars, should we not believe our own eyes?” says Abdullah Kallala, Dr. Shawky’s uncle. His hands and clothes are covered in earth and dust from digging out his relatives. Beside him, four family members are carefully salvaging what they can from the ruins of the house—blankets, a toy car, a kettle. “Is there a weapons store here or any Scud missiles? There is nothing,” he says.

For nearly three months, Saudi Arabia, backed by a coalition of Arab countries, has been bombing Yemen on an almost daily basis in a campaign against the Houthis, a rebel group that has taken over large parts of the country, including the capital.

Forces loyal to ex-president Ali Abdullah Saleh have allied with the Houthis and have waged vicious street battles with local militiamen for control of cities like Aden and Taiz. More than 2,200 people have been killed in the conflict, including nearly 300 children, and over 9,700 have been injured, according to UNICEF.

Aside from the bombs and bullets, Yemenis are being slowly strangled by an air, sea, and land blockade imposed by the coalition that has cut off supplies of food and fuel to the Arab world’s poorest country. More than 20 million people—or 80 percent of the population—are in need of some form of humanitarian assistance, nearly half of them children.

In Sanaa, the shortage of fuel has literally brought life to a standstill. Entire streets are blocked off with an endless row of unmoving vehicles stacked three lanes deep waiting in line for an unseen gas station more than a mile in the distance. People eat and sleep in their cars, sometimes waiting days for a turn at the pump. Some get out and push their cars when the line finally moves a few inches forward at a time. When they finally get there, they are allowed a maximum of 60 liters each. Tempers flare and fights break out; people have killed each other over fuel a number of times.

“My whole life is about getting gas,” says Tawfiq al-Hamadi, a 48-year-old government worker who has waited 26 hours and has finally reached the front of the line. “Life is paralyzed, everything is stopped. It’s a tragic situation.” He says he siphons some of the gas out of his car when he gets home to use in his generator.

The gas-powered pumps that provide water for drinking and sanitation now lie mostly inoperable. The poorest have to scrounge for water, carrying empty jerry cans to small tanks to collect water for cleaning, cooking, washing, and drinking. Outside a school in the Shaouba neighborhood, children happily scamper barefoot in dirty puddles as they wait in line. Each family is allowed to fill five jerry cans each, equivalent to roughly 20 gallons.

“Where is the world? How they can they watch this happen to us,” says 25-year-old Fariq Barrada, while waiting over an hour to collect his water ration. “They speak of human rights and then there’s nothing.”

There has been close to no electricity in the capital for months. The rattle of generators is ubiquitous during the day; at night the capital plunges into darkness. Solar panels are in growing demand, and vendors have begun to sell them on the street. Trash hasn’t been collected for weeks. Smoldering piles of rubbish lay strewn in the roads, their stench lingering in the air.

Prices of food, fuel, and other basic goods have gone up. There is no work and little economic life. Ex-bank employees find themselves driving taxis. Day laborers wait on dusty street corners for hours on end before going home empty-handed.

“I have had no work since the war began. Nothing,” says Abdel Ghani Ali, a 37-year-old construction worker. He sits among a dozen day laborers on a sidewalk in al-Qaa, a crowded neighborhood in Sanaa. Carpenters, painters, plumbers; none of them can find a way to earn a living. They have sent their families back to their home villages where they live off charity. “Everyday we come and wait. The situation is very bad, we don’t have enough to buy food.”

Meanwhile, the nation’s health system has come to a near halt. “Yemen’s health system is suffering its biggest disaster in the country’s history,” says Tamim al-Shami, the spokesperson for the Health Ministry. He says more than 60 health facilities across the country have been damaged in the conflict. Epidemic disease is on the rise, with over 3,000 reported cases of dengue fever and over 8,000 cases of malaria.

In the Goumhoureya hospital in Sanaa, the wounded are everywhere. They lie in cots with broken legs and arms, the flesh torn out of them by flying shrapnel. The hospital is struggling to maintain enough fuel to power its generators; it relies heavily on international aid organizations for basic supplies.

Across from the main building is the country’s only burn center. Patients from around the country have come for treatment. From Saada in the north, Aden in the south, and districts in between. They are wrapped in gauze, their exposed skin glistening with pain.

Osama al-Saqef is 16 years old. His torso and arms are wrapped in bandages; there is yellow pus soaking through. The skin on his face has been burnt off. Two weeks ago he was walking in the street next to a security installation in Hajjah when a missile hit, engulfing him in flames and forever disfiguring him. He now lies supine, taking quick short breaths, almost panting. He tries to speak, to tell his story, but he cannot.

There is no hope here for the UN-sponsored peace talks that are being launched in Geneva this week. In Yemen, the negotiations seem illusory, something for the politicians and the world to brandish as evidence of their efforts to end the suffering they have either ignored or helped create.

As they sit in Geneva, the deafening booms of falling bombs and the dull thuds of anti-aircraft fire echo in the night sky of Sanaa, heralding a new day of destruction and death.