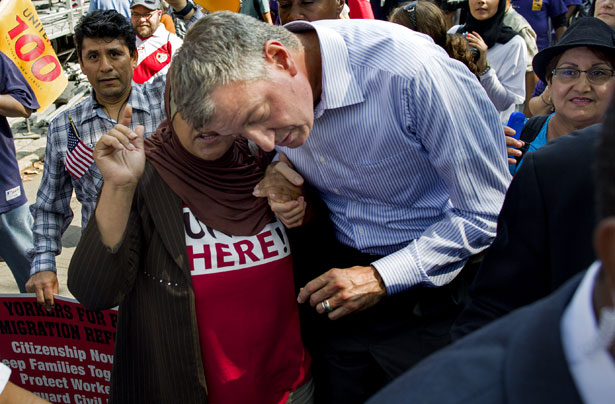 Bill de Blasio will be the next mayor of New York City. His run has attracted progressive energy and media attention not seen since Elizabeth Warren’s equally important run for the Senate in Massachusetts last year.

His core theme throughout the campaign was New York City’s staggering inequality. He talked early and persuasively about the need to tax the wealthy, about requiring (not just asking) developers to build more affordable housing, about stop-and-frisk. For those reasons and others, The Nation endorsed Bill de Blasio for mayor.

In a remarkable campaign, de Blasio won big in the primary, and then ignored the conventional wisdom that after a primary, Democrats must pivot to the right. He describes himself as an “unapologetic progressive,” and recent polling has him with a strong lead (up by more than 40 percent).

Now, it’s tempting to think that a big progressive win is sewn up. But in fact, the opposition to the de Blasio agenda will be real and extremely well-funded. It’s important for him to have a mandate when he takes office, and the best way to show your support is by boosting the tally he gets on the Working Families Party line.

The Nation strongly urges its readers in New York City to not just vote for de Blasio but to vote for him on the Working Families Party line.

A vote for de Blasio on the Working Families Party line is a way of giving your vote some added,well, oomph. It’s a way to send a message that you applaud the progressive values that de Blasio embodies—even as he comes under blistering attack from the Murdoch press and other advocates for the status quo.

The Working Families Party is a progressive grassroots party founded in 1998 by a handful of community, union and progressive activists. The Nation in fact played a small but important role in the birth of the Working Families Party back in 1998, the first time we urged our readers to vote for the party’s ticket. These days, the WFP is on the upswing, racking up wins far afield from their original home in New York State.

Recent accomplishments include the “Pay it Forward” plan to tackle the student debt crisis that the WFP and some far-sighted elected officials initiated in Oregon. In Bridgeport, Connecticut, they are working with public school parents and teachers in the fight against the high-stakes testing of the corporate school reform crowd. In New Jersey, with SEIU, Citizen Action and other allies, they won paid sick days in Jersey City—and have a plan to take it across the state. The WFP strategy for building an organization that is “independent and relevant” is refreshingly sane and optimistic all at once.

In New York City, where the party has been organizing for fifteen years, the WFP has seen the fullest expression of its vision—their “long game” as columnist Harry Seigel recently wrote in the New York Daily News.

In 2009, the WFP elected a slate of insurgent progressives to the City Council. Those members went on to found the progressive caucus, which was eventually able to overcome a billionaire Mayor Bloomberg to win paid sick days for a million New Yorkers and reign in the worst abuses off stop-and-frisk—both major priorities for the party. They also elevated de Blasio, then a Brooklyn City Council member, to the office of public advocate. This year, the party is poised to add another dozen progressive members to the City Council—creating a tantalizing opportunity to turn New York into a laboratory of progressive governance.

De Blasio and the fiscally conservative New York State Governor Andrew Cuomo are on something of a collision course. While de Blasio wants to raise taxes on the rich, Cuomo wants to run for re-election in 2014 as a tax-cutting moderate. (In fact, he’s already installed Republican former Governor George Pataki to help lead a commission on tax reform—a bad sign indeed, as Pataki dramatically shifted the tax burden from the wealthy to the middle class in his years in office).

Both de Blasio and Cuomo are Democrats. And indeed, the Democratic Party is quite a big tent and seems to have room for both progressives and mini-austerians. But voting on the Working Families Party line is about as good a way as we have to communicate which side we’re on. A strong vote on the Working Families Party line could measurably strengthen de Blasio’s hand in his Albany negotiations with Republicans and Democrats alike.

And if enough of us stand together and vote on the WFP line, New York City voters will have a chance to say “no” to the gilded city and “yes” to a city that, as WFP Executive Director Dan Cantor tirelessly repeats, “works for everyone, not just the wealthy and well-connected.” Vote de Blasio, vote WFP.

More New York news as CUNY students fight back against the shutting of their student center.