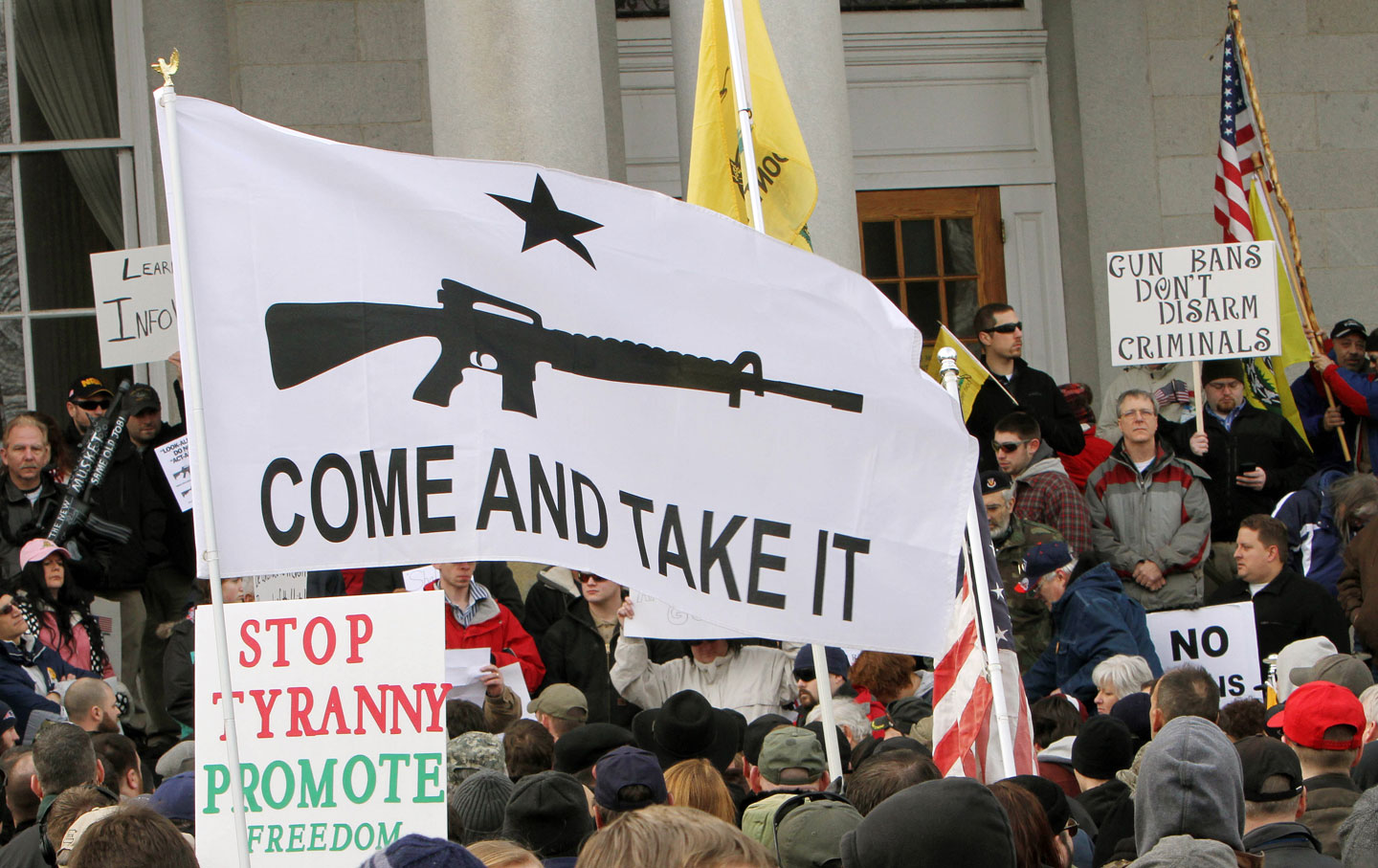 In Dallas last week, Micah Johnson offered a real-world example of a law-abiding citizen taking up arms to fight what he perceived to be a government that was trampling the rights of its citizens. In reality, it looked like a bloody mass murder of a bunch of cops who were just doing their jobs.

But make no mistake: Johnson was acting on one of the central beliefs that animates the gun rights movement. It’s been called the “insurgency theory” of the Second Amendment, and it holds that Americans must have the right to own military-style weapons because a heavily armed populace is the last bulwark against a tyrannical government running amok.

The NRA is quite explicit about this. In 1998, Charlton Heston gave a speech at the National Press Club shortly after being named president of the NRA that has since become famous among gun-rights activists. “I say that the Second Amendment is, in order of importance, the first amendment,” he told the gathered reporters. “It is America’s First Freedom, the one right that protects all the others.… Because there is no such thing as a free nation where police and military are allowed the force of arms but individual citizens are not.” He called the right to bear arms, “the right we turn to when all else fails.” (The NRA publishes a magazine called America’s 1st Freedom.)

It’s not a new idea. In the aftermath of the 1994 assault weapons ban, Charles Dunlap Jr., a colonel in the US Air Force, wrote in the Tennessee Law Review that the insurgency theory of the Second Amendment dates back to the Constitutional Convention of 1787. In addition to protecting the institution of slavery from the abolition movement, the right to bear arms was a key a compromise between Federalists, who favored a strong central government with a standing army, and Anti-Federalists, who “had a deep distrust of professional militaries.”

Their English heritage, and especially their awareness of the excesses of Cromwell’s New Model Army, taught them that standing armies could be tools of a tyrannical monarch or a rogue military commander. Their apprehension gained a solid a posteriori basis when British regulars were used to quell the spreading dissatisfaction with colonial rule….

The linchpin of the scheme to counterbalance the potentially dangerous standing army was an armed citizenry, a force [Anti-Federalists] considered superior to any body of regular troops that could be raised in the United States.… Among the solutions the Framers devised to ensure that state-based militias remained effective and free from federal encroachment was the Second Amendment.

It’s not the 18th century, and today most people take it as a given that modern states have standing armies, but the theory that ordinary people need access to military-style weapons to stave off tyranny persists among American gun-rights absolutists. It inspires the militia movement, and the Oath Keepers—former soldiers and law-enforcement officers who vow to resist laws they consider to be unconstitutional, by force if necessary. It formed the basis of the armed standoffs with federal law enforcement by the Bundy family and their supporters at their Nevada ranch in 2014, and again in Oregon earlier this year.

The insurgency theory of the right to bear arms is also a critical piece of the argument against banning assault weapons, armor-piercing bullets, or high capacity magazines. Writing in the Berkeley Political Review last year, Nathan Black argued that “the Second Amendment was not written to ensure protection against criminals, nor was it written to protect the rights of hunters. This is of critical importance, as it immediately undermines any argument on restricting so-called ‘assault weapons’ and the like as overly powerful for civilian ownership. The whole point of firearm ownership is that it allows civilians to fight against agents of the government, be they law enforcement officers or members of the American military, should a situation arise when the government grossly violates the rights of American citizens.”

Micah Johnson was what Wayne LaPierre might call a “good guy with a gun”—a combat veteran with no criminal record. He clearly believed that “a situation [had arisen] when the government grossly violates the rights of American citizens.” He was reportedly “upset about the recent police shootings” of Philando Castile in a suburb of Minneapolis and Alton Sterling in Baton Rouge. A neighbor said Johnson was a “good kid” who “just snapped” last week, after watching one too many videos of black men being shot down.

CBS reported that Johnson had amassed a large stockpile of weapons and bomb-making materials. On Facebook, he had liked radical black groups that had posted “calls to arms” similar to what you might find at an Oath Keepers or militia website. One post read, “The Pig has shot and killed Alton Sterling in Baton Rouge, Louisiana! You and I know what we must do and I don’t mean marching, making a lot of noise, or attending conventions. We must ‘Rally The Troops!’ It is time to visit Louisiana and hold a barbeque.”

And last Thursday, donning body armor, Johnson grabbed at least one “military-style weapon” and gunned down 12 people in the streets. Dallas Police Chief David Brown said that his investigators are “convinced that this suspect had other plans and thought that what he was doing was righteous and believed that he was going to target law enforcement—make us pay for what he sees as law enforcement’s efforts to punish people of color.”

The NRA’s “insurgency theory” fantasy rests on the idea that “patriots” will rise up in unison against government tyranny. But the reality is that firearms have never been a bulwark against tyranny; we’ve maintained a constitutional government for 230 years because of the separation of powers—because the Framers divided power between co-equal branches of government that serve as checks on any branch gaining absolute power. They set up a Supreme Court to litigate disputes that arose from the Constitution. An independent judiciary that can, and frequently does, overturn laws that conflict with the Constitution and which can, and often does, check the power of the executive branch, negates the whole premise that the public needs AR-15s to engage in an armed uprising if necessary.

Moreover, from the signing of the Constitution to this day, we’ve never had any consensus about the proper role of the federal government. So whether you share the delusions of Micah Johnson or LaVoy Finicum—whether you think you can stop police brutality or the Bureau of Land Management with a gun—you’re not going to lead “the people” to rise up behind you.

The most you can do, as we saw so tragically in Dallas last week, is kill some cops.