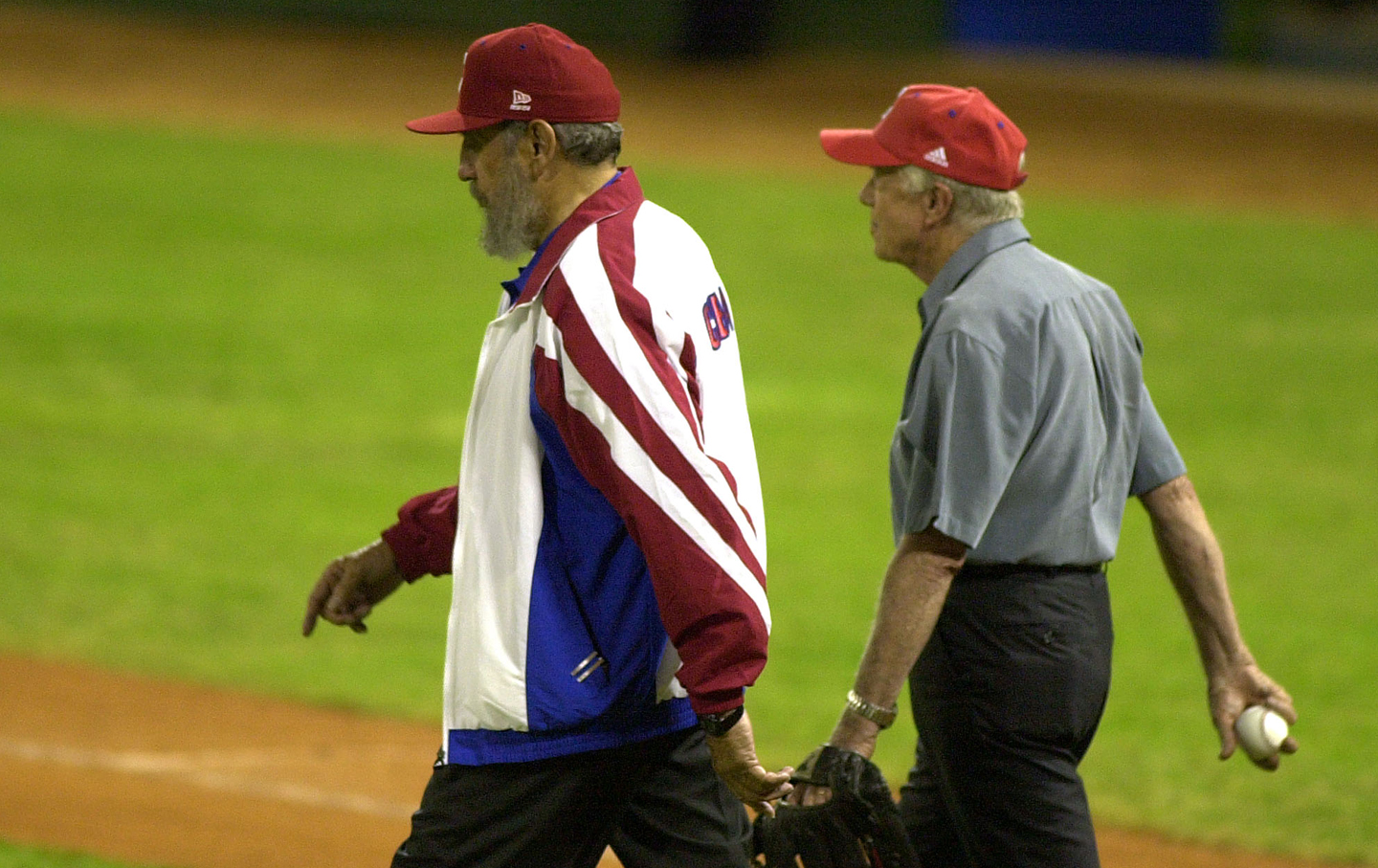 Jimmy Carter and Fidel Castro get ready for the first pitch at an all-star baseball game in Havana, Cuba on May 14, 2002. (AP Photo / Cristobal Herrera)

When former president Jimmy Carter traveled to Havana in May 2002, he attended a Cuban all-star baseball game. Over the objections of his Secret Service agents, Carter joined Fidel Castro on the mound, sans security, to throw out the first pitch. By benching his security detail, Carter publicly demonstrated respect for his hosts and confidence in just how normal US-Cuban relations could become.

President Obama may have a similar opportunity this month, when he becomes the first US president in 88 years to visit Cuba. As part of behind-the-scenes preparations for his trip, Major League Baseball has scheduled an exhibition game between the Tampa Bay Rays and the Cuban national team on March 22—perfectly timed for the president to attend. “We are very excited,” tweeted Deputy National Security Adviser Ben Rhodes, “to…strengthen ties between our countries through our love & passion for the game of baseball.”

Since the beginning of the 20th century, when US occupation forces distributed bats, balls, and gloves to win the hearts and minds of Cuban kids, baseball has been a national pastime in Cuba, much as it is here. The media image of Obama tossing the first pitch—if his security detail permits him to go on the field—will send a clear message to sports aficionados from Middle America that our common ground with Cuba includes the baseball diamond. It will also send a message to Cuban fans that competition on the playing field will be a great bonus of normalized relations. Just as Ping-Pong paved the way for Richard Nixon’s opening to China, “béisbol diplomacy” should help smooth the political road for Obama’s historic trip to Cuba.

The original proposal to use baseball to advance engagement with Cuba dates back 41 years, to a series of exhibition games planned for March 1975 by then–MLB commissioner Bowie Kuhn. Kuhn first approached Secretary of State Henry Kissinger with the idea at a Christmas Eve soiree in December 1974; he followed up with a formal letter in January 1975 and, after a meeting with Cuban sports officials, a phone call to Kissinger’s office in February. The Cubans want to play ball, Kuhn told Kissinger’s top aide for Latin America, William Rogers.

In a Secret/Eyes Only memorandum to Kissinger, Rogers passed along Kuhn’s hopes that the secretary of state would approve the game because “major league baseball has a magic value in projecting a positive image of the United States.” Rogers noted that an exhibition game in Cuba “would have a symbolic significance not limited to the sports pages” and “would also reawaken memories of your China moves.”

At the time, as William LeoGrande and I record in our book Back Channel to Cuba, Kissinger was secretly attempting to negotiate normalized relations with Cuba; his aides thought baseball diplomacy could play a positive role in advancing those talks and set the public stage for a new policy of engagement. “Pre-Castro Cuba was considered the most ‘Americanized’ of any Latin American country in terms of baseball, hotdogs and coca-cola,” they argued in another secret memo titled “Additional Talking Points on Sending a Baseball Team to Cuba.” Baseball “is still the most popular spectator and corner lot sport.” In Cuba, an exhibition game between US and Cuban teams would “undercut the demonology in Cuban propaganda about the United States.” In the United States, the game would help bridge “the gap between the Bay of Pigs and a new relationship with Castro.” And “picking a game we are likely to win,” they presumptuously suggested, “would go a long way with Americans who are depressed by the regimented victories of the Communists in [the] Olympic games.”

But Kissinger was not convinced. Despite Kuhn’s repeated requests, the secretary of state vetoed the idea. After 18 months of secret meetings, the Kissinger-Castro talks failed.

It took another 24 years before President Clinton finally authorized the first game, part of his administration’s “people-to-people” diplomacy with Cuba. The game was the brainchild of former Washington Post reporter Scott Armstrong (who was also the founder of my organization, the National Security Archive). Along with filmmaker Saul Landau, Armstrong approached Baltimore Orioles owner Peter Angelos with the idea of taking his team to Havana. They then practiced a bit of “skybox” diplomacy, luring Clinton’s national-security adviser, Anthony Lake, to watch a game at Baltimore’s Camden Yards with Angelos and lobbying him for approval.

Eventually, Lake’s successor, Sandy Berger, gave the green light in 1998. “The more we could do to show the Cuban people who we were…the better,” Berger said in an interview. “And what better way to do it than baseball? That was perfect.”

Even with White House backing, it took months of haggling between the Orioles and the State Department to arrive at an arrangement that would allow the team to go to Havana. Cuban authorities were welcoming, but State Department officials repeatedly sought to impose conditions on the games—who could go, how tickets would be distributed, and how the proceeds from the television rights to the game would be allocated, among other restrictions—which almost led to cancellation of the project.

But on March 28, 1999, Angelos and MLB commissioner Bud Selig joined Fidel Castro behind home plate as both teams lined the field and the Cuban and US national anthems played over the loudspeakers to a stadium filled with 55,000 Cuban fans (and US celebs such as singer Jimmy Buffett and actor Woody Harrelson). The game was a nail-biter; the Orioles finally scored a run in the 11th inning to win 3–2. (In a rematch at Camden Yards that May, the Cubans clobbered the Orioles 12–6.)

The goodwill engendered by those first games was short-lived; the saga of a little boy named Elián González, whose mother drowned at sea trying to spirit him to the United States, chilled the thawing relations between the two countries during Clinton’s last year in office, and the incoming administration of George W. Bush proved hostile to improving ties. But the games set a precedent for Obama’s use of béisbol diplomacy to advance engagement and reconciliation. Baseball is a “tangible tradition” shared by both nations, observes Fulton Armstrong, the National Security Council staffer responsible for the Orioles’ trip in 1999. “A baseball game would be a fitting ceremony in honor of both peoples’ desire to normalize and, well, play ball.”