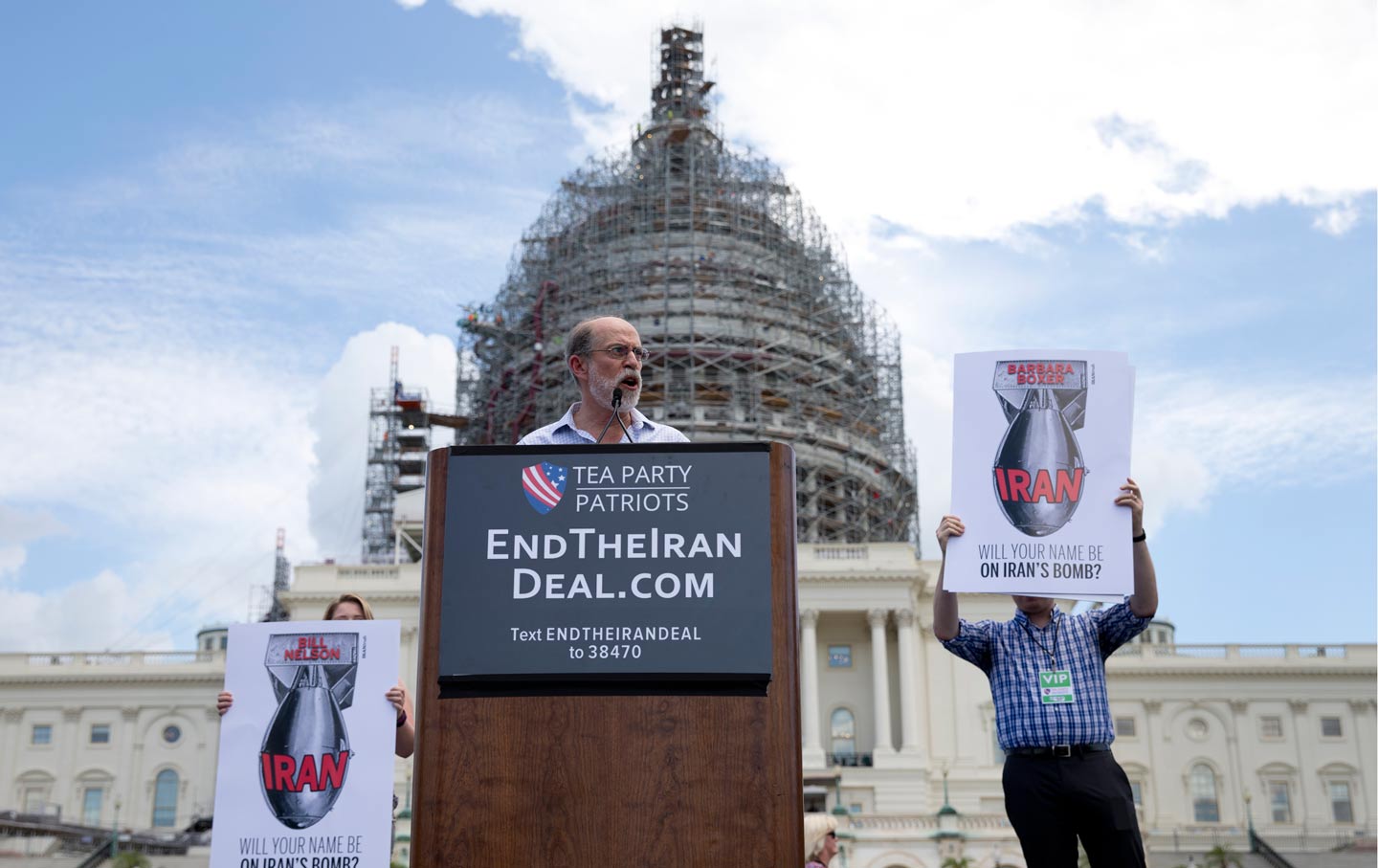 This is a frightening time for Muslims in America. One of the country’s major parties is in thrall to anti-Muslim ideologues.

If this was not clear before—and it should have been—it is now. On March 17, Texas Senator Ted Cruz, who is in second place in the race for the Republican presidential nomination, announced his foreign-policy team. As Matt Duss, president of the Foundation for Middle East Peace, put it on cable news, the advisers “run the gamut from Iran-contra conspirators to anti-Muslim conspiracy theorists.” Duss was referring, on one side, to the sometimes loopy warmonger Michael Ledeen and the convicted liar Elliott Abrams, both of whom were implicated in the Reagan administration’s dirty dealings of the 1980s, and, on the other, a to cadre of Islamophobes whose bigoted and McCarthyite ideas would be laughable if they hadn’t gained so much traction among GOP elites and voters.

Chief among the latter cohort stands Frank Gaffney, perhaps the most notorious anti-Muslim activist in America today. Gaffney is the author of a long list of incredible hypotheses not only about the ills of Islam—the faith of about a third of the world’s population—but particularly about what Muslims are trying to do here in the United States. One of those Muslims, Gaffney suspects, is Barack Obama. That’s why, his twisted logic goes, the Obama administration redesigned the US Missile Defense Agency logo so that it “appears ominously to reflect a morphing of the Islamic crescent and star with the Obama campaign logo.” Sounds like an open and shut case.

Ted Cruz seems eager to prove that he is endorsing anti-Muslim bigotry.

Seemingly eager to prove that he is endorsing this bigotry, Cruz added a few more prominent Islamophobes’ names to his list of advisers. Fred Fleitz, a disgraced former top aide to the famously mustachioed and infamously hawkish George W. Bush administration UN Ambassador John Bolton, and Clare Lopez, who among other things thinks Iran already has nuclear warheads, both work for Gaffney’s Center for Security Policy. A Bloomberg View report on Cruz’s advisers also included Gaffney’s combative deputy Jim Hanson, bringing the number of CSP officials on the list up to four—more than any other institution represented therein. Next, there’s Andrew McCarthy, a former prosecutor, and Lt. Gen. Jerry Boykin, a religious-right activist and Holy Warrior, both of whom traffic in Shariah conspiracy theories and otherwise agree with Gaffney on a whole lot.

None of this love for Gaffney should come as much of a surprise to anyone who has been paying attention to what Ted Cruz has been saying. In November, Cruz all but called for an explicit religious test to determine which refugees fleeing conflicts abroad can come to the United States, urging the exclusion of all Syrian Muslims. He only danced around a de jure declaration of discrimination by suggesting that Muslims are “not facing genocide the way Christians are.” And, as Slate pointed out, Cruz has also declared that the Justice Department’s pledge to prosecute anti-Muslim violence is tantamount to “muzzling the free-speech rights of Americans.” It’s not just that he wants to see purported anti-Christian crimes prosecuted more; Cruz wants to actively reduce the enforcement of laws against anti-Muslim attacks.

According to Eli Lake, the Bloomberg View columnist who broke news of the retinue, the fact that warmongering Islamophobes are balanced among Cruz’s advisers by the likes of Abrams and Ledeen is supposed to be some kind of comfort. “Cruz’s team includes former officials who reject Gaffney’s broad view that any Muslim who believes in Sharia law by definition believes in a totalitarian and violent ideology at war with America,” writes Lake.

All of this, of course, is meant to stand in contrast to Republican presidential front-runner Donald Trump, who has staked out positions against Muslims so demagogic (“I think Islam hates us,” he said this month, upping the ante by flatly refusing to distinguish between terrorists and more than a billion peaceful Muslims, including millions of Americans) that they invite comparisons to fascism.

The problem for Cruz is that one doesn’t balance hateful rhetoric with the “Ledeen Doctrine.” (“Every ten years or so, the United States needs to pick up some small crappy little country and throw it against the wall, just to show the world we mean business.”) Or with this lawyerly evasion of Cruz’s own Islamophobia offered by Abrams in Lake’s piece: “When Donald Trump talked about barring all Muslims from entering into the United States, Senator Cruz of course did not endorse that opinion, in part because he knows the law.” That Cruz merely knows that the law prevents him from barring all Muslims from entering the United States—with no lip service to any semblance of liberal democratic norms or basic decency (which he so clearly lacks)—is cold comfort.

The problem for Cruz is that one doesn’t balance hateful rhetoric with the “Ledeen Doctrine.”

Earlier this month, a group of some 120 Republican foreign-policy thinkers said in an open letter that they could not support Trump, citing among other reasons his anti-Muslim positions (though not without a hypocrite or two among them). If they are serious about their objections to these positions, they ought to write a similar letter declaring that they could not support Cruz’s candidacy so long as bigots like Gaffney and his claque remain advisers to the campaign.

Lake, in his story, calls Cruz’s advisory group “a big tent—by GOP standards—when it comes to foreign affairs.” The key phrase there is “by GOP standards.” Trump’s bigoted rhetoric catapulted him into a commanding lead for the Republican nomination. It speaks to how poorly the party has done at beating back sentiments like Gaffney’s among its grass roots. That Cruz holds second place while including this arch-Islamophobe and his posse speaks to his role in perpetuating that problem. There is no room for a balancing act with Gaffney on one end and Abrams and Ledeen on the other; their baggage is too heavy on both sides and will ultimately break the scale. Who can deny that the Republican Party today is awash in rank bigotry?